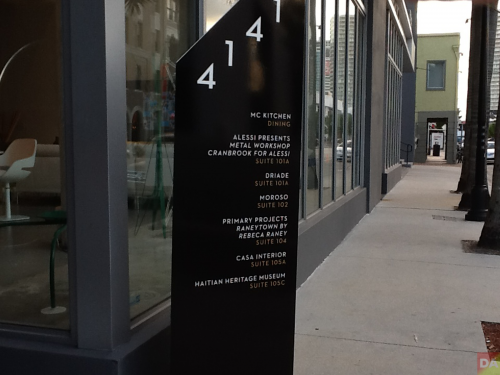 Last Spring Alessi introduced ‘Metal Workshop Cranbrook for Alessi’ at ICFF 2012, and to also celebrate the of reopening of their remodeled Soho storefront. That same exhibit was moved to Alessi’s year-old Miami Design District store for Design Miami 2012. Tomorrow the design fair opens. We’re here to check out ‘Workshop’. Paolo Cravedi, Alessi’s Managing Director North America is there to greet us.

[ DesignApplause ] Paolo, please tell us about Metal Workshop.
[ Paolo Cravedi ] Our collaboration with Cranbrook started back in 2009 when Alberto Alessi was invited to Cranbrook for a lecture. And of course you probably know that Cranbrook has an incredibly important modern American design history which gave us people like Charles Eames, Harry Bertoia and Florence Knoll. 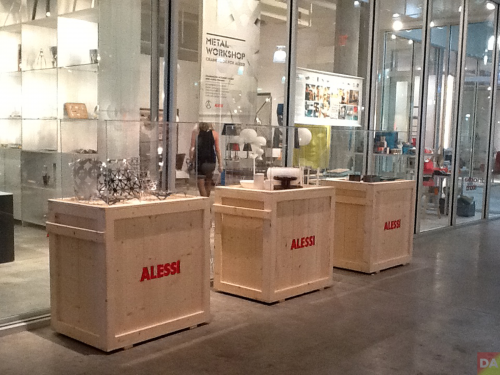 Alberto was really fascinated by the beautiful campus which was designed by Eero Saarinen, and Saarinen directed the school for many years. It was magical and Alberto felt like Cranbrook was the last link to this chain of Arts & Crafts movement that’s been going on and on, for centuries really. These things really hit Alberto to the point where there was this spark between Cranbrook and him. Cranbrook was interested in collaborating with an Italian design factory and experimenting with Alessi. For Alberto the interest was working with an institution with a powerful design heritage like Cranbrook. 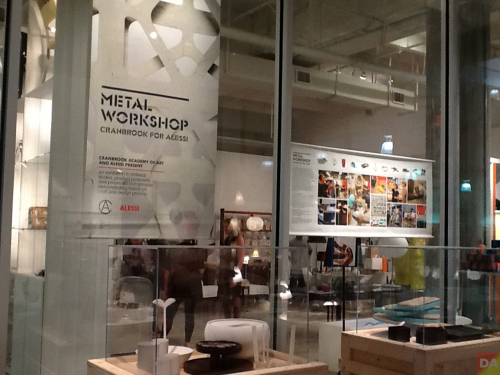 The workshop was quite open. The only condition that Alberto gave to Cranbrook was that the alumni and students selected had to be metal experts at the hands-on level. That’s one thing that’s very important, if there was one thing that was very visible during this vist to Cranbrook was the knowledge that Cranbrook indeed was hands-on. The school also has state-of-the-art equipment, 3D rendering.

The selected team worked in very different typologies. Some typologies are very familiar in the Alessi catalog and some were very new and experimental. All through the workshop the contact between Cranbrook and Alessi was kept using a blog. With the distance and time difference the blog proved to be an amazing long-distance collaboration tool. The students posted all of their ideas and sketches, and pictures of the prototypes and Alberto and his team would look at the presentations and they could then give direction to the students.

Off all the projects that were presented, four were produced in 2012. They are hitting the stores as we speak. One is called them is called ‘Trellis’ designed by Scott Klinker. It’s a basket in steel colored with white epoxy resin. Scott also was the director of this particular workshop. It’s a perforated sheet of metal then bent on the four corners. The inspiration for ‘Trellis’ came from elements found around the campus. 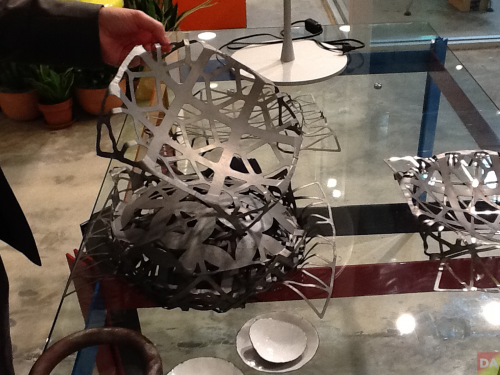 Another project is called the ‘V Tray’ by Adam Shirley. It comes in two versions: black metal and polished stainless steel. This is a concept born from the idea of what a folded piece of metal can do. He experimented with many shapes but liked the simple accordion fold. ‘V Tray’ can be used both for the desk or the kitchen. 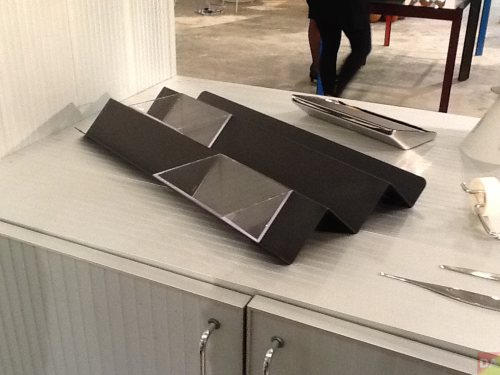 Yet another project is call ‘Pinch’ also by Adam Shirley. His goal was to take a very raw steel industrial pipe and give it a very simple manipulation, in this case, a pinch at one end. This solution created a flower vase. There are some nice details in this shape like making it easier to display flowers. 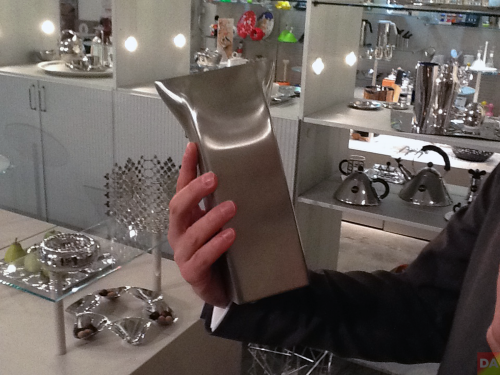 The last of the four pieces that’s in production is from John Truex and he calls it ‘Dear Charlie’ which is a banana tree. In the words of the designer ‘this is just a tree waiting for its fruit’. The tree can also be used to hang jewelry, keys, and of course definitely perfect for grapes and bananas. The bottom of the base is rubber and the base is heavy. No wobble in ‘Dear Charlie’. 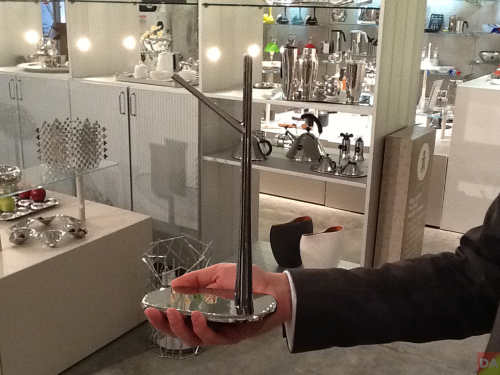 [DA] Paolo, what have we learned to date from this workshop?
[PC] The workshop model is important to Alessi and offers many advantages. One is to experiment and try this and that and obviously also to be introduced to new talent. We have learned that the Cranbrook workshop was very fertile, it produced four very very nice products. And as of today, ‘Dear Charlie’ is one of our best sellers during this period. And Alessi has a new typology: the banana holder. Unbelievably successful.

[DA] A new product is like shooting an arrow in the air, you don’t know exactly where it’s going to land, meaning which ideas are grasped by the public.
[PC] That’s exactly right. Although we believe everything we place into production has been carefully selected you don’t know really. Yet we have been pleasantly surprised by the success of many projects through the years. Like ‘Dear Charlie.’ 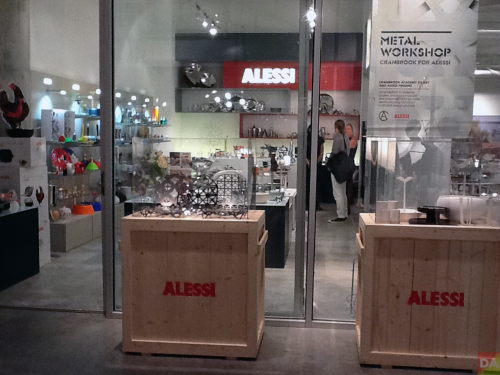 [DA] Alessi opened this space a year ago at last year’s Design Miami. This building is filling up and I can’t help but notice your neighbors in this courtyard. I see Arclinia, Driade, Flos, Maxalto, Moroso, Zanotta…
[CD] That’s right, we’ve been here one year. The retail consultant who leased space for our neighbors and us too likes to call this little Milan. There’s also a new and excellent Italian restaurant right over there, MC Kitchen. 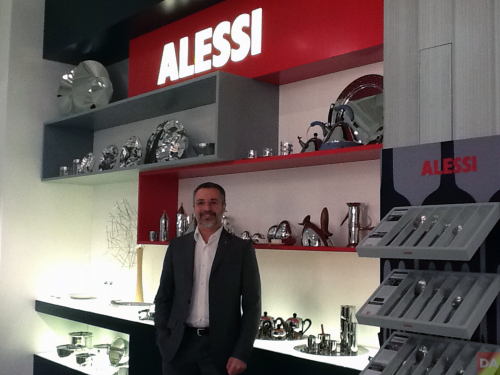 [DA] What a wonderful story behind each of these new products. It should inspire the design students for sure. Grazie e ciao Paolo.
[PC] Ciao Ron, and thank you for the visit.

How to remove pinky toe to fit into your designer stilettos.

do they or don't they.