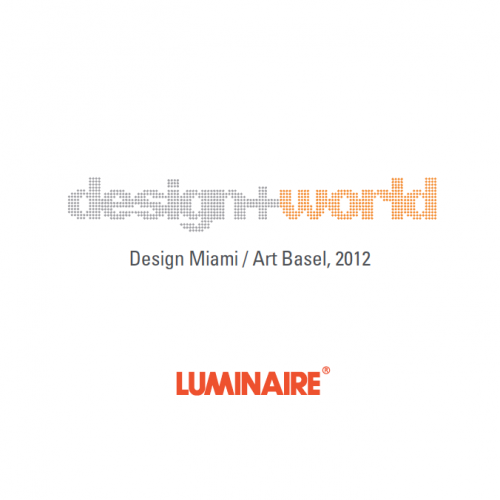 designapplause is at the second iteration of luminaire’s ‘design+world’, an ‘important’ installation, because you will see product debuts and first-time U.S. appearances from notable world-class designers and producers. in six hours the installation will open. we wanted to include a photo of nasir kassamali but he said “i will let our work speak for me and my photograph.” doug mcclellan, nasir’s assistant, is showing us around. doug’s title is design catalyst. 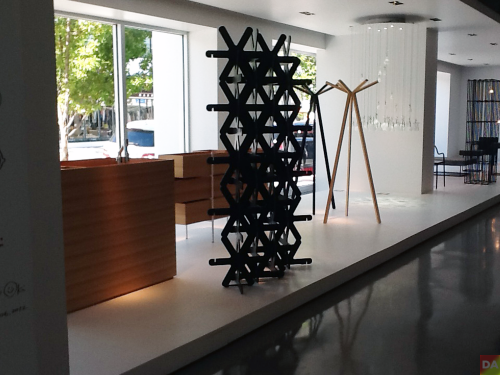 “the collection in the window we’re presenting are pieces by nendo including a new collection by brisazza bagno introduced in milan in 2012. the first time being shown in the U.S. we’re focusing on three pieces:, the mirror, the sink and the sliding drawer. also the ‘yuki screen’ room divider from cappellini, and ‘rokumaru’ coat rack by de padova. we are introducing for the first time in the U.S. pendent lights ‘growing vases’ and ‘press lamp’ by lasvit. here’s the nendo ‘k%’ collection which is made in china and singapore and first introduced this year in the U.S. at luminaire chicago in june during neocon. in this collection are the interesting ‘melt’ chair and ‘rain’ book shelf, ‘heavy’ table series, ‘scissors’ room divider and the ‘pencil’ chair.” 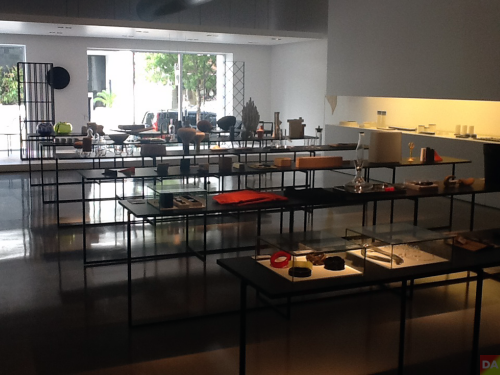 “and we’re also launching our e-commerce store and we have a pop-up shop of those pieces here as well. there are about 100 items in the pop-up and about 500 on the online store ranging from small accessories and lighting, side chairs, small tables, so it’s really a curated section of the best luminaire has to offer.” 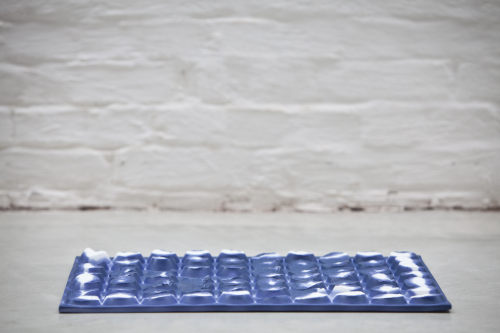 “we’re also presenting new work by the belgium ceramist piet stockmans who we’ve had a long relationship with and his work is in the lightbox.” 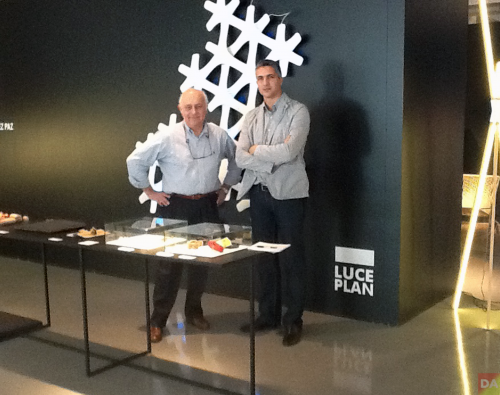 “here we have LED lighting solutions, some of which are organic LED’s. the U.S. debut of ‘synapse’ (above) by designer francisco gomez paz for luceplan. the ‘synapse’ system is based on a repeated three lobed module, consisting of polycarbonate shells and programmable RGB LEDs using wireless technology and white light to create surfaces and divide rooms. the interlocking luminous cells system opens up new avenues of expression.” 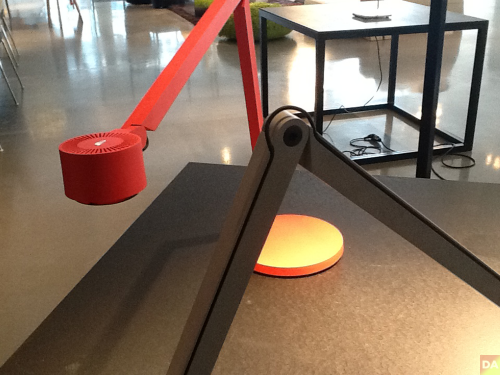 “new lighting by dirk winkel for the swedish light company wastberg is also first for U.S. the ‘winkel’ lamp is made out of plastic from castor bean oil which is a renewable resource and does not impede the food supply chain.” ~ nasir says watch out for dirk w. 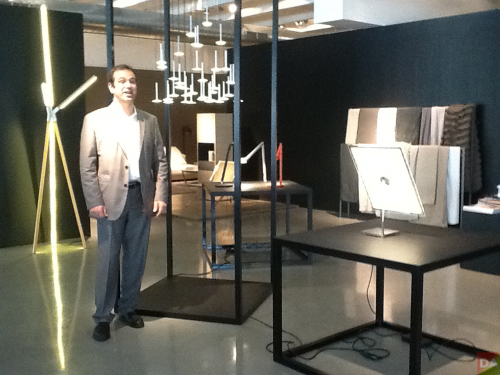 “we have ‘i.rain’ by thierry gaugain for blackbody which is a french manufacturer of OLED (organic light-emitting diode ) technology and lighting. ‘i.rain’ is a production introduction as well as debuting in the U.S. via luminaire and boasts the thinnest OLED profile in the world.” 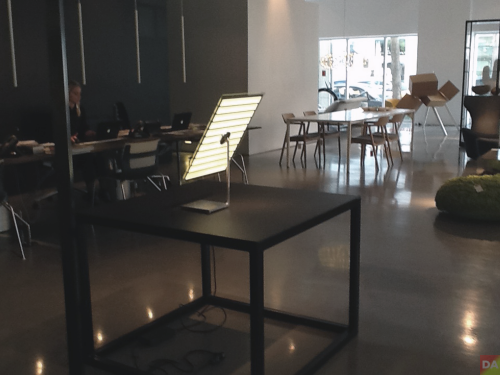 “here’s a limited edition from flos by philippe starck called the ‘light photon’ which celebrates flos’s 50th anniversary and boasts the world’s largest OLED screen and a reflective back that distributes light on one side and reflects light on the other. only five produced till now. it’s limited to 500 pieces and luminaire is representing the first five pieces available in the U.S.” 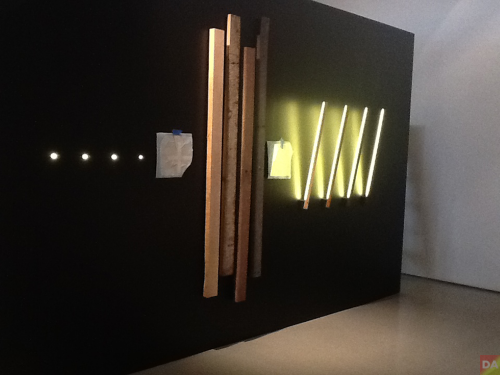 “here’s a collection from new york-based design studio rux, their ‘stickbulb’ lamp which are LED pieces that are inserted into reclaimed wood from a boardwalk in new jersey and quite environmentally friendly. ‘stickbulb’ is only available at luminaire for the time being.” [designapplause] thank you doug. 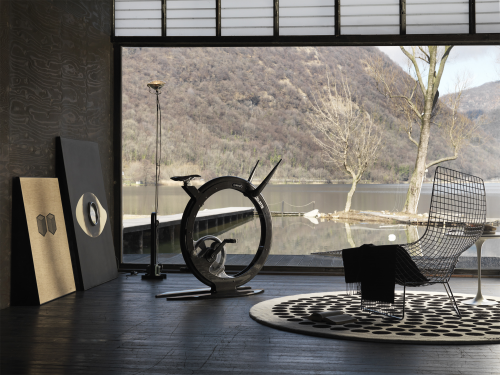 luca schieppati took his ciclò — a concept bike that the milan design museum liked enough to include in its permanent collection—and transformed it into an exercise machine, ‘ciclotte’. push the pedals and the epicycloid crank system spins the magnetized main wheel. manufactured using materials like carbon, steel and fiberglass, the personal workout system incorporates a unique epicycloids transmission system. this in turn generates a magnetic field and plenty of thigh-burning resistance. the bikes appearance at design+world is the U.S. debut. 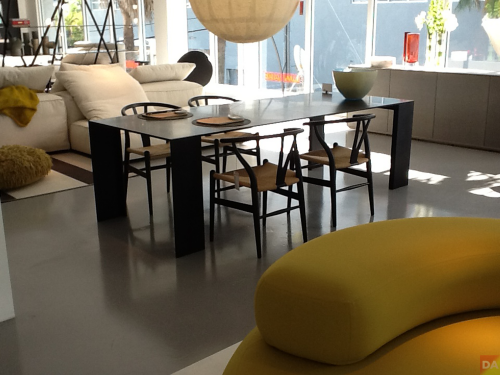 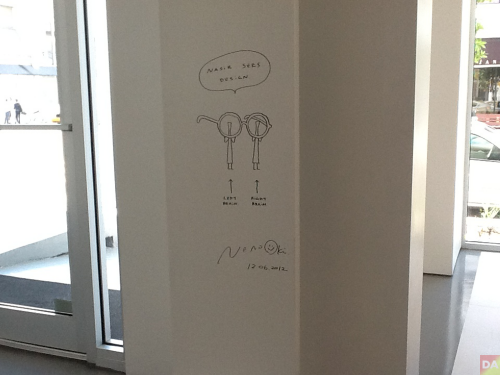 nendo speaks for the design world

[ luminaire vitals ]
the lab is 10 years old, six years in its present location. this installation is the 77th dating back to 1979. there has been an installation for all eight design miami’s. luminaire will celebrate its 39th anniversary march 2013. [ luminaire ] [ online store ]