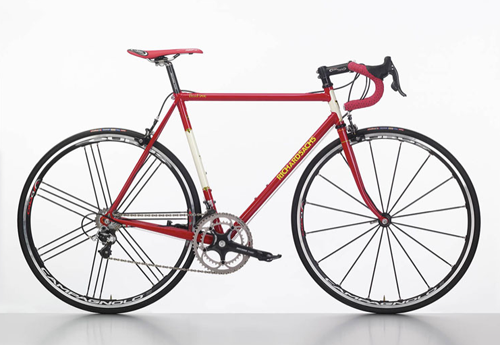 The “About” section on Richard Sachs’ website may read like a self-assured campaign manifesto, if not, at times, like a straight up ego trip, but it’s not as if Sachs hasn’t earned his fair share of bragging rights in his 38-year-long bike building career.

Since he opened shop in 1972, Sachs has become one of the world’s foremost bike builders, with a fleet of handmade wonders that have graced the track at velodrome. There’s a lot about his process that sets him apart, like the fact that he does everything by hand, by himself. No apprentices, no employees, no outsourcing.

From choosing the geometry of the frame to filing the lugs, Sachs Cycles is a one-man show. As you might guess, his turn-of-the-century methods don’t give into currents trends in materials or construction, and he doesn’t hesitate at sneering at the competition. “For some companies, only tubing recently declassified by the Department of Defense will do.” Sachs, on the other hands, doesn’t change his materials, tube shape or the position of the riding angle. He doesn’t build concept bikes or “unrideable prototypes,” and he doesn’t take shortcuts. All this attention to detail takes time, and apparently makes little money. “The bike industry makes money. I make bikes.”

Even if the words “control freak” come to mind, you have to admire his dedication to the craft, not to mention his obvious skill. Working solo, he says, is the only way he can guarantee such high standards. In his words, “the weak link is always the work force. At Richard Sachs Cycles, I am the work force.” It’s a business model from which he’s never diverted, from cutting and brazing the tubes to answering the phone, Sachs is a one-man operation. “If you have a question about frame design or construction, proper fit, acceptable alignment, anything at all, call me,” he says. “I will be the one answering your call and I would be very pleased to tell you more.”


If you’re in New York you can see some of Richard’s work at the Museum of Art and Design as part of their latest exhibition, “Bespoke: The Handbuilt Bike,” up until August.

Perrin Drumm is nothing if not a road trip enthusiast. After moving from her hometown of LA to NY and to LA again, she hiked through half a dozen National Parks, snow-shoed a sizable portion of the Adirondacks, and resisted the overwhelming charm of the South to get back to Brooklyn, where she struggles to learn the trumpet, aspires to be a better Scrabble player, and lives and writes, and remains, as of yet, catless.

view all entries by Perrin Drumm.

bamboo is lightweight, strong and it grows quickly.

the concept is to be as compact as possible, including collapsible wheels.

bicycle enables the rider to create and store energy just by pedaling.