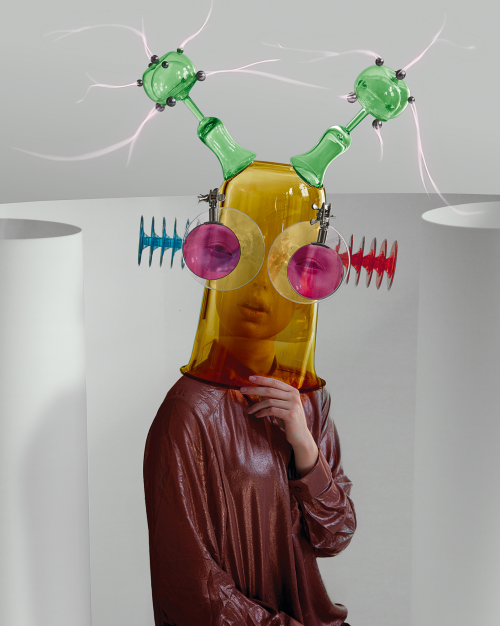 This past January at Heimtextil 2013 we talk with Olaf Schmidt, Vice President of Textiles & Textile Technologies at Messe Frankfurt.

[DesignApplause] Heimtextil is a diverse and comprehensive event. How many different companies are represented in the exhibitors?
[Olaf Schmidt] I would say around 2,600+ exhibitors of which 150 are first-time companies from 62 countries.

[DA] Do you know why the U.S. companies are here? Who they wish to engage with?
[OS] My answer is quite speculative in that I think maybe buyers from Europe and China. We have a lot of Chinese and Indian companies that are looking for U.S. buyers. It’s an international fair. It’s a meeting platform. We have roughly 65% international visitors. Today Asia is providing new market opportunities and there’s a significant increase of visitors from China. 10-15 years ago, few thought to sell fabrics to China. They are now looking for high quality design. Branding is very important too. It’s a very interesting development.

[DA] Is there a trend on what’s being exhibited in the last 5 years or so? What’s the mix? Are you creating a market or responding to the needs?
[OS] We respond to the needs. This fair is a picture of the market. We have now 43 additions. A long, long history. Like an old mother, a very established fair. 20 years ago we had more European and less Asian companies. This year, we have a growth of European companies. Why? They’re looking for new markets. Companies from Spain, Italy and Portugal, their local markets feel the economic conditions. These companies are looking for international business with China and the Middle East. With Russia and the U.S. as well.

The exhibitors motivations have changed. For example, the Chinese companies are now focused on their rapidly growing local market. We in fact have an inter-textile show in Shanghai every August. 1,500 exhibitors are featured here. It is the 2nd largest show of textiles and mainly for the Chinese market. Here in Frankfurt, we introduce companies to world markets where they can sell their fabrics. That’s our main agenda.

[DA] Speaking of satellite shows, at a Techtxtil press conference (interesting insight on smart fibers and the future) someone said that Messe Frankfurt is cannibalizing their brand with so many shows being served up. He adds that it’s a difficult decision to make concerning which shows to attend. Mr. Braun (Detlef) responded saying one big show is indeed more efficient. He added that maybe companies need to send more than one person to trade fairs.
[OS] I think we have a very clear strategy. We have one focus show: Frankfurt, a very large international gathering of buyers and exhibitors. However, there are specific markets of interest such as the Russian market and the Chinese market, but of course not all buyers are here in Frankfurt. So we reach out by bringing regional local shows to these markets.

[DA] What are your other markets of interest?
[OS] In addition to Frankfurt, Russia, and China where we have three shows, there’s also India, Tokyo and New York. We have InterTextile, Home Textile Sourcing and Interior Lifestyle there as well. A the new show will be in New Delhi: Heimtextil India 2014

[DA] How much do you wish to expand your markets? What are some of the challenges?
[OS] We always are looking for new markets but at the moment, we have seven shows. With India eight shows. From this perspective, that’s enough at the moment.

South America is interesting, of course. But the taxes are very high to import fabrics to Brazil putting a great burden on the companies. There aren’t enough European brands who are interested in the U.S. market.

[DA] Is it because the customers aren’t good at that end?
[OS] For each country you need a different cutting. You have to deliver very fast. When you are a German manufacturer, usually you are not successful in Spain because they have a local manufacturer. In the textile market, it’s a very fragmented local market. We don’t have many international trends like in the fashion business. Branding for a home textile market is very difficult. In Frankfurt, you find a lot of companies looking for private label businesses. They work together and then the branding is not important. It’s the quality, design and supply that is. They are here and buy the fabric. A complex mix.

Factor, for example, in Turkey, they supply to the U.S. but not many other companies do. To get European brands to the U.S. has been very difficult. Now we have the Home Textile show in N.Y. It’s mainly Asian companies who are focused on this segment. It’s a smaller show but it’s for companies who have to order short quantities and it’s very easy for them.

[DA] How should a designer best absorb Heimtextil?
[OS] I think definitely the designer should visit the trend areas because this is the first step where you get what’s on trend for the coming season. 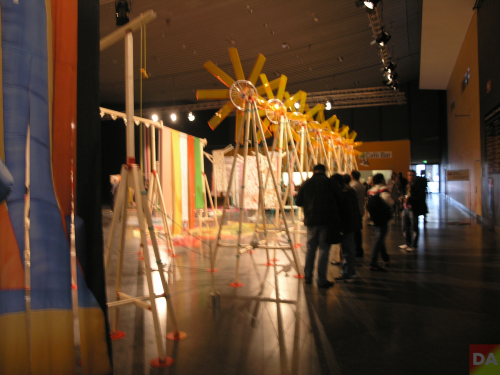 [DA] Trends 2013/14 is such a creative and beautiful presentation.
[OS] Thank you. The designer will discover what the fabrics on trend feel like and what their colors are. They will learn what are the new materials, structures and colors. Also, to better understand a trend, not in the perspective of colors and design, we present function. We have this issue of recycling for example. We speak of functional fibers. We have 30 fiber companies here in Frankfurt that produce new functionality like sun protection. We speak about climate things, fire resistance. For a contract interior designer, this is important because they look for fabrics for hotels and restaurants. When the designer first comes to Frankfurt, I would recommend they go to the trends.

[DA] What is ‘Design Live’. Is that new for this year?
[OS] We’ve had companies from different nations who offer design patterns for jackets and printing for many years, but the concept of presenting ‘Design Live’ is new. We created a new area called ‘Design Live’. It’s a new styling of this area. A new branding. 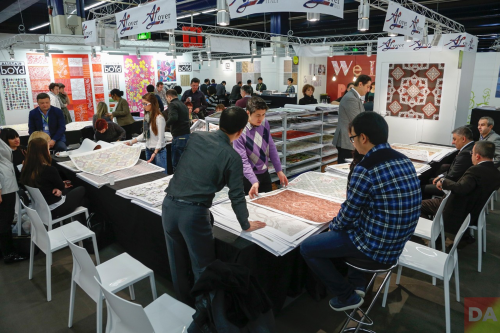 [DA] We found it a very tricky model, though. They wouldn’t let us take pictures because they were afraid people would steal their designs. If someone bought the designs, then they would no longer own it. Only two companies let us take a picture but only a shot of one example. Are the participants or exhibitors of ‘Design Live’ selected by you?
[OS] They are normal exhibitors who come and say they would like to sell their patterns. It’s not a selection.
[DA] We enjoyed the aesthetic continuity and the feeling provided within ‘Design Live’, very distinct from the other offerings. You knew that they were smaller, more artisan style companies, but with a much more contemporary sensibility.

[DA] We had a hard time finding contract booths. We didn’t hit every building but are they sprinkled around or only a few contract exhibitors?
[OS] They are sprinkled because there are companies who not only produce contract textiles but many also produce for private segments too. In this regard, we spoke to the exhibitors and asked if they wanted to have a separate area and they said that it didn’t make any sense. It was a requirement from the exhibitors.

It speaks to where we are with production, especially textile production, where one company doesn’t just do one thing anymore. There are a myriad of applications. What seems to be only a residential company of course has contract clients.

[DA] What’s the percentage of contract versus the non-contract at this moment?
[OS] We only know that 15% of our visitors are looking for contract textiles. You see the guide lists around 400 companies but these are only companies that wish to be listed, it’s not mandatory. Though to be listed is a good marketing tool it’s possible companies here are not listed. We know that contract generates 40% of our total revenue. 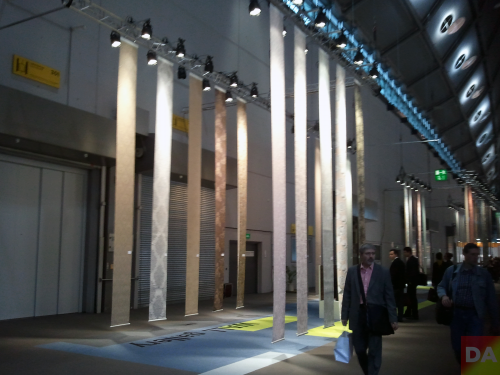 one of many idea galleries

[DA] Do you feel you need to differentiate yourself from other fabric shows?
[OS] Of course we look at the competition. The concept is that we would like to show all kinds of textile products in Frankfurt. All kinds of countries which offer these kinds of products. We thought many years ago to have some accessories, but at the end we have to concentrate on the core business and then we are successful.

[DA] Tell us about ‘Let’s Talk About.’ What are you trying to achieve with this format? How was it conceived and is it well received?
[OS] ‘Let’s Talk About’ is a format that offers a different topic each year. We spoke last year about the future of hotels. Issues on design and fabrics for the future. This year we had a seminar about ‘Webchance’, a competition between internet shopping and retailers. We offer retailers lectures and education on how they can use their shop and also the web to sell the fabrics. The smaller retailers don’t know what to do. We would like to give some support to the industry and talk about sustainability. A lot of retailers don’t know what that is. We have seminars on architecture for larger retailers. It’s a service palette where we change every year according to what’s happening in the market.

[DA] What are some of the topics that you think you’ll address in the next edition?
[OS] I don’t know. I think this was a fantastic show in terms of growth from the European companies. We had a good audience from all over the world. We’re working very hard to determine what will be the trend for the next year and that takes time. There is no specific subject.

[DA] In yesterday’s Techtextil press conference, the future represented an emphasis on lower energy, sustainability and innovation. There was mention of not only innovating how it works and the end result and what the fiber can do, but also a revolution in thought process. This process included a thought-provoking concept of a European sense of self-identity, that Europe has much to gain with a united business and marketing effort.
[OS] There’s always value with any unified effort so that thought is important.

[DA] Tell us about challenges. Running out of space?
[OS] Space, no. For me, the quality is more important and maintaining it requires a great deal of effort. A way to maintain quality is to curate what is presented at our show. To exhibit in Frankfurt a company must send samples and also demonstrate they have capacity to export. We offer great quality and good suppliers. The offerings are also a consideration. The segment of decoration is a very interesting topic. Wall coverings, Hall 11, offers house textiles like bed and table linens, towels, and big brands.

[DA] Textiles, more than say objects such as kitchen appliances require more than photos to truly appreciate the offering. You have to touch the fabrics. A website or photo does not generate enough emotion. Do your exhibitors offer fabric samples to interested parties?
[OS] Yes, I think so. It’s safe to say that materials offer more sample opportunities whereas ready-made products does not. 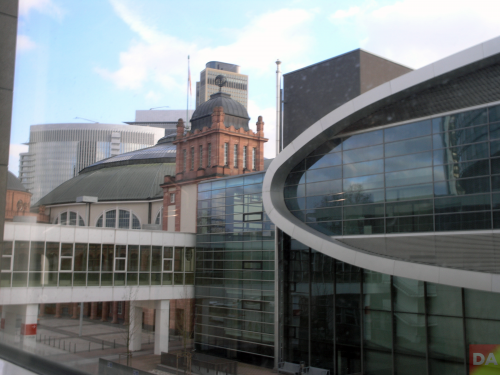 [DA] Is there anything we haven’t covered that you might want to say?
[OS] I think the main message is directed for anyone who’s interested in the textile market should come to Frankfurt. A very easy message. 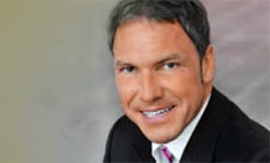 design miami has named the german designer konstantin grcic as its designer of the year for 2010. december 2-5.