The car the designers were talking about at the Detroit auto show was overlooked by the crowds. It was Nissan’s idX concept, originally unveiled in Tokyo. Channelling the spirit of the classic Datsun 510, which has roots in American 1970s memories as well as those of Japan, the idX has deeper rationale of DIY
behind it. 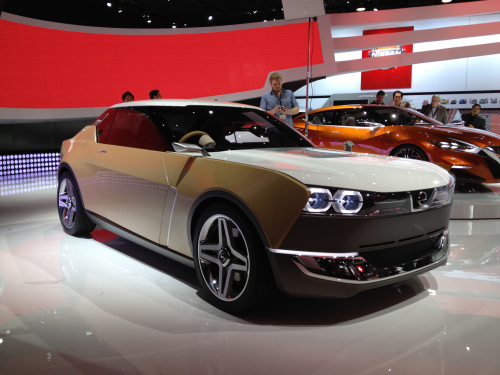 [ official release ]
The way people are buying cars is changing. A choice of colors and matching wheels is no longer enough. In a society where cars are purchased as a reflection – and enabler – of a driver’s lifestyle, the way future models are designed needs to be revolutionized. This was the thinking behind the visionary “co-creation” of the Nissan IDx Freeflow and IDx NISMO concept cars, which make their first appearance in the United States at the 2014 North American International Auto Show in Detroit.

The co-creation product development approach requires input from consumers early in the process. It was designed to appeal to “digital natives,” the generation born after 1990, and integrates their feedback into the creation process. Nissan thinks this approach could have real applications in the near future.

“IDx NISMO and IDx Freeflow show how Nissan is using new and innovative product development methods to meet the needs of younger customers who have novel, exciting ideas, and engage with them to build the cars they want,” said Shiro Nakamura, Senior Vice President and Chief Creative Officer, Nissan Motor Co., Ltd.

The two IDx concept cars offer radically different characteristics, each with their own unique identity, and reflective of their creation by this new approach to product development. The first, the IDx Freeflow, reflects a casual/lifestyle-focused vision. The second, the IDx NISMO, is an ultra-sporty model of the future that looks as if it came directly from a driving simulator.

[ IDx: A Fresh Start ]
Co-creation defines a new relationship between Nissan and its customers. The prefix Nissan gave to the two new concepts, “IDx,” reflects those ideals. “ID” is the acronym taken from “identification,” relating to the things all individuals relate to on a personal level in a car. The “x” is the variable, representing the new values and dreams born through communication.

Engaging with members of the digital native generation created an opportunity to incorporate a range of new insights and creative possibilities. The co-creation dialogue reached far and wide, from the basic framework of cars, to the last details and finishing touches.

The design of the two IDx concepts incorporates digital natives’ direct expression of the ideal form of ultimate simplicity in a compact sedan. It was as if they were given a clean, white canvas to freely conceptualize anything that was intriguing.

What Nissan derived from this communication was young drivers’ desire for a basic, authentic configuration for a car – a car without legacy influences, based on the ideal proportions and straight stance of a simple three-box shaped car design. Thus, the IDx concepts share the same three-box genesis – vehicles made up of three compartments: engine, passenger and cargo areas. Nissan designers infused the idea of an “authentic car configuration” into their thinking behind this starting point in the form of a “flexible box.”

Several unique approaches were made from a structural standpoint so the IDx concepts could take on various appearances. For example, the front/rear fenders and side structure, such as the door panels, seem to sandwich the cabin to focus attention on the center of the vehicle.

This structure allows the car to differentiate itself from others through the side and front face, with vast freedom for customization. The parting lines (panel partitions) clearly separate the sides and top, and enhance visual clarity while creating a unique and crisp boxed form. Additionally, viewed from the front and rear, the car retains its compact lines while maintaining low and wide body proportions, thereby instilling a sense of it being a “real” car.

Both the interior and exterior share the aim of a simple design, with just the right amount of functions and accessories that are standard on cars to provide a solid sense of build reliability.

In order to have enough flexibility consistent with the creativity inherent to the IDx approach, some areas of the interior incorporate a dual-layered “tight-fit skin.” For example, the instrument panel is simple yet refined, created by employing cast molding in parts in the body structure and on the ventilation ducts. By combining this with sparingly used, close-fitting trim, the instrument panel can be a foundation for various expressions and functions. Similarly, the gauges, center console and floor console were crafted to enable any necessary parts to be installed in an easy and seamless way.

The IDx concepts’ interiors are ultimately the expression of digital natives’ values in a flexible form that is malleable enough to project an exquisite structure, while rendering a unique space inside.

[ IDx Freeflow ]
The IDx Freeflow reflects the sensibilities of the co-creators – the outlook of people who seek natural and tasteful things in every aspect of their daily lives. They seek to employ a simple and clean attitude, using the authentic items that they favor to artfully combine various things and give substance to their self-expression.

The interior details of the four-passenger IDx Freeflow are a carefully selected mix of fashionable functionality and comfort in a design brimming with creative originality. It is meant to feel like a living room inside, where the owner and his or her friends can relax.

The round, no-nonsense steering wheel, attached to the level instrument panel, mounts a modern-looking speedometer that would not seem out of place in a younger person’s lounge. Together with an analog clock prominently located above the centered function monitors, the cumulative effect is an interior that feels heavily influenced by the wish for a cozy, relaxing space.

Additionally, the coordination of metal finishers with the thick surfacing material on the instrument panel and console, combined with the denim selected to cover the seats and certain trim areas, produces sections that dazzle the eye but are balanced by more calming hues in other spots. This is the unique quality of the co-creators’ taste as expressed in the interior appointments. In particular, the moderately faded texture and color of the denim used in the interior conveys a new kind of quality, a back-to-basics charm seldom seen in cars until now.

Though compact in size – about 13.5 feet in length, 5.6 feet in width, and 4.3 feet in overall height – the IDx Freeflow impresses with its daring yet dignified exterior.

The car’s “floating roof,” a seamless rounded roof shape, is another design twist that accentuates the simple box form of the body. The “floating roof” design cue is shared with the Nissan Resonance and Sports Sedan Concepts, which preview future Nissan production vehicles.

The IDx Freeflow’s exterior color is a sophisticated combination of white and flax (a pale yellow shade), invoking a casual feeling like that produced by the pairing of the venerable white T-shirt with khaki chinos, and highlighted with silver accessories or a belt. The overall visual effect is completed by the addition of stylish 18-inch chrome wheels wrapped in 195/50-18 tires.

The digital native cohort’s quest for authenticity can also be interpreted as a demand for economy and efficiency in their everyday car. For this kind of vehicle, the requisite high level of fuel economy and driving performance could come from a powertrain with a 1.2-liter or 1.5-liter gasoline engine mated to a Continuously Variable Transmission (CVT).

[ IDx NISMO ]
Many digital natives grew up playing racing simulation games that feature cars of the past and from all corners of the globe. They have a natural desire to realize that virtual driving experience in real cars of their own, and that is the basis of the IDx NISMO concept.

Not limited to being inspired just by racing cars, IDx NISMO was born from a refined combination of the freedom to borrow liberally from memorable vehicles of yesteryear and the present, in addition to whatever was felt exudes “cool.”

The IDx NISMO’s co-creation dialogue took the distilled heritage of Nissan’s basic box-shaped racing vehicles of the past and married it with various intriguing new details. This resulted in a car that appears to be timeless and moored in a place all its own.

Though IDx NISMO shares the overall length and height of its Freeflow cousin, the 5.9-foot width (versus 5.6-foot for the IDx Freeflow) of the car is testament to its low, wide stance that emphasizes its sporty proportions.

One of the hallmarks of box-type racecars is speediness conveyed by a reverse-slanted nose. On IDx NISMO, this frontal design element is embellished by an aura of seriousness communicated by the use of carbon panels. Side mufflers provide a pleasing exhaust note. The car also has contemporary touches such as front/rear and right/left aerodynamic spoilers and a lightweight 19-inch wheel and 225/40 tire package.

To meet the high expectations for a powertrain equal to the task of propelling such a formidable car, one proposal from Nissan’s engineers is the combination of a high-performance, eco-friendly 1.6-liter direct-injection turbocharged engine, together with a sporty CVT with 6-speed manual shift mode and synchronized rev control. The result is no less than an appealing mix of racing heritage with the finest of modern knowhow.

Scanning the IDx NISMO interior reveals racing-inspired crimson Alcantara® seat covers that entice the eyes, complemented by Spartan-looking meters and gauges that animate the racecar ambience. The lustrous metal surfaces contrast with the bright red suede trim that is augmented by blue stitching.

“This machine’s soul-stirring design echoes the racing car imagery of the past united with the buzz digital natives get from the virtual world they know well,” said Nakamura. “That this car could result from co-creation dialogue alone exemplifies Nissan’s fresh approach to contemplating car design, and even kindles a fire in the hearts of people fond of the good old days of high-performance cars.”

The IDx Freeflow and IDx NISMO will be shown at the Nissan display at Detroit’s Cobo Hall during the run of the 2014 North American International Auto Show, January 18th through 26th.

preparing for cross-country flight may 2013.

10 questions to determine your innovation style.

to achieve the substance of innovation you need to design the proper form of organization. think about this.