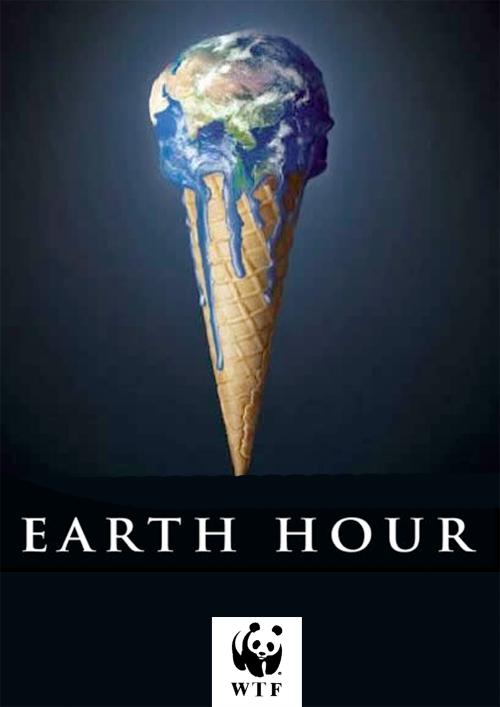 turn off your lights at 8:30p local time for one hour.

At 8.30pm local time on Saturday 26 March 2011, Earth Hour will celebrate a worldwide commitment to ongoing change for the betterment of the one thing that unites us all – the planet.

Your journey can start here by signing up and adding your voice to the hundreds of millions across the globe who have already spoken with their actions. Check out the inspiring Earth Hour 2011 video to see what the planet’s voice looks like.

Earth Hour started in 2007 in Sydney, Australia when 2.2 million individuals and more than 2,000 businesses turned their lights off for one hour to take a stand against climate change. Only a year later and Earth Hour had become a global sustainability movement with more than 50 million people across 35 countries participating. Global landmarks such as the Sydney Harbour Bridge, CN Tower in Toronto, Golden Gate Bridge in San Francisco, and Rome’s Colosseum, all stood in darkness, as symbols of hope for a cause that grows more urgent by the hour.

In March 2009, hundreds of millions of people took part in the third Earth Hour. Over 4000 cities in 88 countries officially switched off to pledge their support for the planet, making Earth Hour 2009 the world’s largest global climate change initiative.

On Saturday 27 March, Earth Hour 2010 became the biggest Earth Hour ever. A record 128 countries and territories joined the global display of climate action. Iconic buildings and landmarks from Asia Pacific to Europe and Africa to the Americas switched off. People across the world from all walks of life turned off their lights and came together in celebration and contemplation of the one thing we all have in common – our planet.
Earth Hour 2011 will take place on Saturday 26 March at 8.30PM (local time). This Earth Hour we want you to go beyond the hour, so after the lights go back on think about what else you can do to make a difference. Together our actions add up.

Earth Hour by WWF
Earth Hour is organized by WWF. With almost 5 million supporters and a global network in over 100 countries, it’s one of the world’s largest and most respected independent conservation organizations. WWF’s mission is to stop the degradation of the Earth’s natural environment and build a future where people live in harmony with nature. 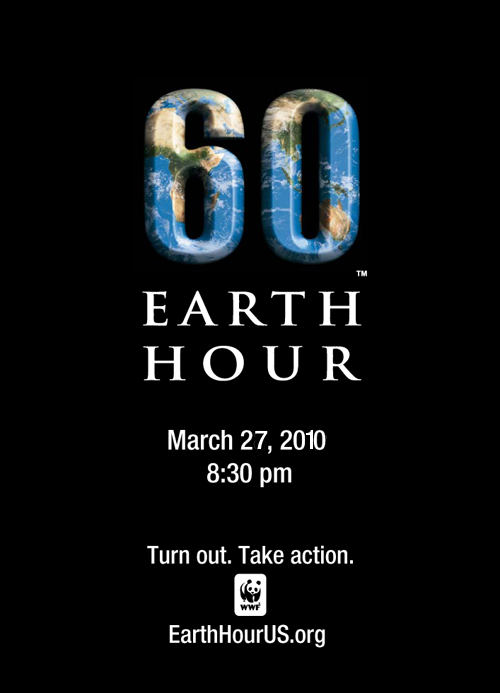 5,635,485 people globally newly signed up for Earth Hour this year. The global cities. The US cities. AND NEW earth hour kids. 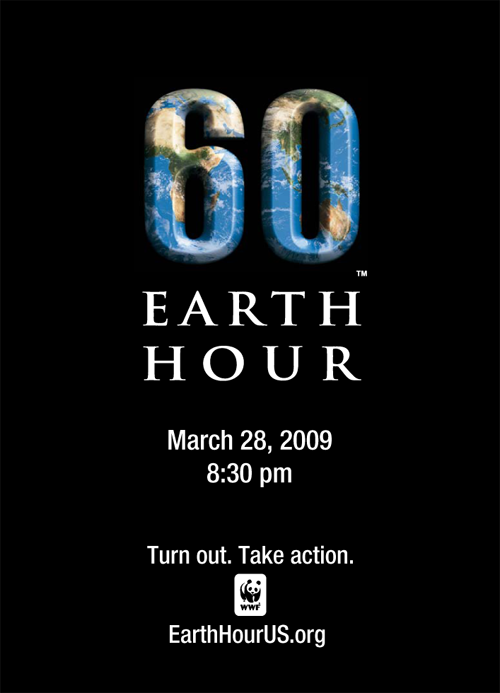 1760 cities globally signed up for Earth Hour. The global cities. The US cities. AND NEW earth hour kids.

It’s been a week since Earth Hour 2008. So we looked around to see what happened then, and if
anything since…

A student told us Google went black! Good for them. This is how we envisioned a black Google.

The normal Chicago skyline at bottom.

This taken from the Chicagoist…

Earth Hour officials indicate last year there were 2.2 million who participated in a one-hour effort to bring awareness to energy conservation. Yesterday, they estimated that number was around 10 million. In Chicago, the Sears Tower, the John Hancock, the Wrigley Building, and the Tribune Tower dimmed decorative lights, while 500 McDonald’s throughout Chicagoland turned off their golden arches. In the theatre district, marquees went dark, and Elphaba, the witch from “Wicked” turned out the lights with a dramatic “spell”. Navy Pier’s iconic ferris wheel went dark and nearly every store on the Magnificent Mile turned out their lights. END_OF_DOCUMENT_TOKEN_TO_BE_REPLACED