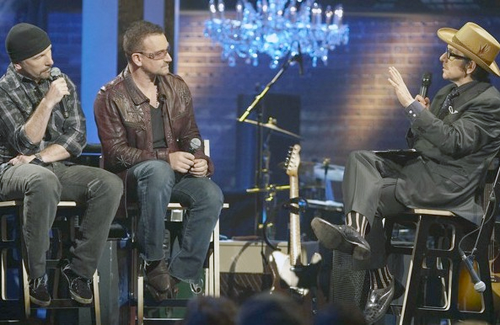 every time I come across a dialogue with Elvis Costello, my respect for this guy grows.
Below is an edited transcript of a recent conversation Costello has with The Edge and Bono of U2. This is all a prelude to Costello’s second season of “Spectacle: Elvis Costello with …” which debuts Wednesday, 12/9/09 at 9pm EST on the Sundance Channel. Here Costello identifies peer-to-peer feelings that are evoked regarding their creativity, their product, and how creativity is critiqued when the source is new, unfamiliar…

Q—When you were talking to Bono and The Edge, who brought up the similarity between “Get on Your Boots” and “Pump It Up”?

A—I thought it would be fun to have a bit of sport with that because people had written to me and all sorts of people had mentioned to me that there was some sort of similarity, and I thought the only way to deal with that was head-on. And we didn’t even talk about it, we just played. I just thought it was fun. I wasn’t trying to put one over on them or anything.

Q—Were you always as collegial with your fellow musicians as you are on the show?

A—I don’t think so initially. I think initially when you start out, you’re a little bit more guarded, you know?

Q—With contemporaries such as U2 and the Police, were you all buddies or was there more of a sense of competition back then?

A—I don’t know about competition. I think we definitely ragged on each other a little bit. That’s on record, and Sting mentioned it in the interview. There’s always a sense of bewilderment that any group appears with a new sound, and you’re doing just fine topping the bill with the sound that you’ve got, and they come roaring by you playing something that doesn’t even sound like songs at first. U2, at their own admission, were not songwriters to begin with. It was like, it’s a fantastic sound, but where are the songs, you know? And then you realize that they are songs, but they’re just not shaped the way that you’re familiar with, so that’s an innovation of a kind.

Q—Has doing the show added to your understanding of what these other people are doing?

A—I think it just really confirms that no matter who you are, there’s nobody that’s completely without some insecurity or anxiety about what they do. You see the humanity in people when they come into a situation, particularly when they’re taken off their certain game or there’s common ground.

Q—Do you book the guests?

A—Well, I had the wish list, and then we go and see. I do call them up myself and write to them or whatever is necessary. I called Aretha (Franklin) and tried to get her on the show. And much to my surprise she picked up, and we had a very genial conversation, which unfortunately didn’t conclude with confirmation to do the show. There’s always people you wish for, but you can’t really complain with the range of people that we had.

A—I never heard that. But I also read Paul McCartney. You could theorize onward and onward. I think 20 episodes is a very good number to have achieved, and if there should be any more after this, then so be it.

Reframing the stats about architecture.