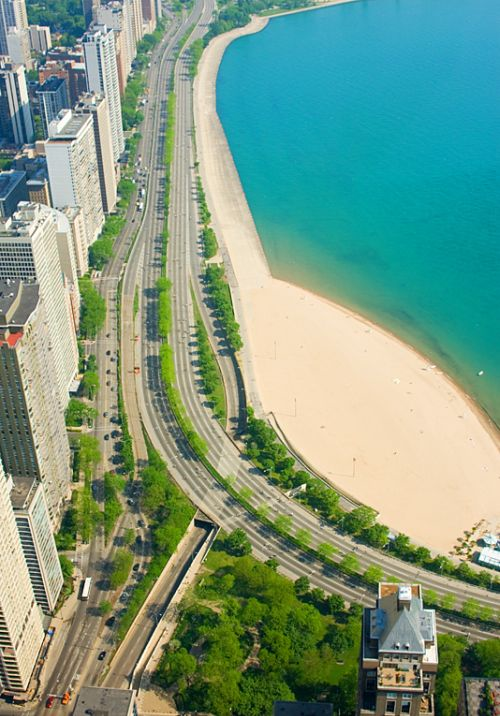 from high atop the john hancock building looking north. notice no cars only bicycles on two ( outer ) drive lanes. 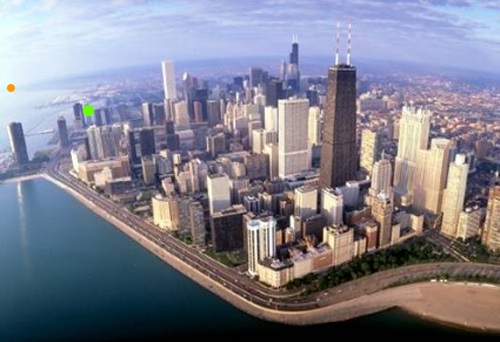 above: with john hancock in the foreground we are looking southwest. the green dot is the midway point between a 15-mile stretch on lsd that is closed down from 6am – 10am. the orange dot 7.5 miles away ending at the museum of science and industry. 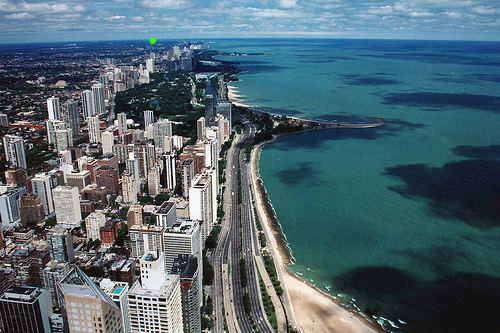 above: looking north again, the green dot 7.5 miles away where the drive abruptly ends. of interest, lsd is on a landfill, part of a plan ( daniel burnham plan ) to keep the lakefront open to the public. 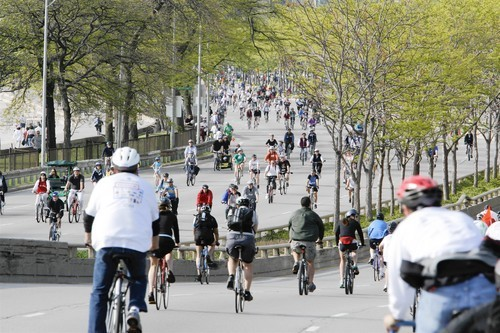 above: back down to earth this near the midway point where 18,000 will pass. 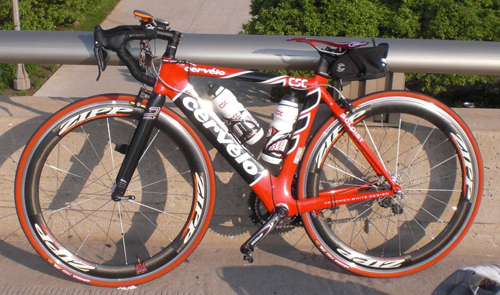 
may 30, 2010, was the ninth annual MB financial bank “bike the drive.” the event is a fundraiser for the active transportation alliance chicago’s voice for better biking, walking and transit. the fun continues at the post-ride festival from 8 a.m. to noon in grant park, with live entertainment, event sponsor giveaways, and $7 breakfast options from goose island brew pub.

History:
early bicycles arrived in Chicago in the 1860s. by 1900, there were 54 bicycle clubs with more than 10,000 members. by the late 1890s, chicago was the “bicycle-building capital of america”. according to the 1898 chicago bicycle directory, approximately two-thirds of the country’s bicycles and accessories were manufactured within 150 miles (240 km) of the city.

chicago has recently seen an increase in the amount of bikers traveling throughout the city. this can in part be attributed to the current mayor, richard m. daley. daley has said, “my goal is to make the city of chicago the most bicycle-friendly city in the U.S.” daley created a mayor’s bicycle advisory council (MBAC) in order to encourage bicycling in the city.

the council created the chicago department of transportation bike program. the program, whose efforts are guided by the bike 2015 plan, approved in june 2006, has created over 100 miles (160 km) of new bike lanes, installed 10,000 bicycle racks, and installed 165 miles (266 km) of signed bike routes in 2006.

where to place their cars and which cars in which neighborhoods.