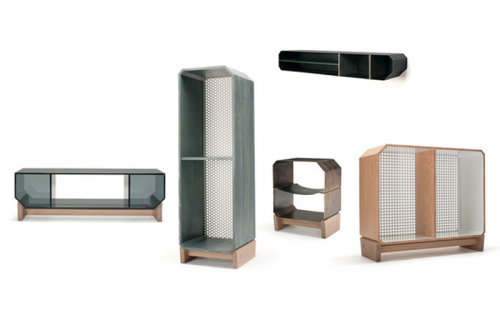 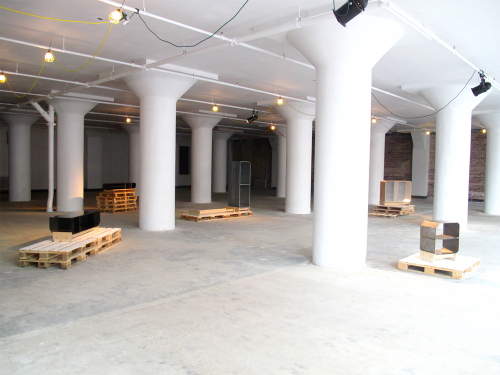 Today the two of them are setting up the pieces for their new exhibition opening tomorrow. For two weeks the installation will exist in a freshly rehabbed 9,000 square-foot ground-level retail space just west of Sears/Willis Tower where we are conducting this interview. This will be RBW’s first solo show. This is Volume’s third exhibition.

Before we start, a little background. Volume gallery, was conceived in 2009 by Sam and Claire Warner. Volume is virtually located in Chicago, as an event-based gallery with a specific focus on American design, particularly emerging contemporary designers.

RICH BRILLIANT WILLING, founded in 2007, is by now an internationally renowned furniture and product design studio based in Manhattan. The three founding partners are Alex Williams, Charles Brill and Theo Richardson.

This show is titled “Pro Forma”

The installation will consist of five objects with limited editions of 12 to 16 each. The role Volume plays in this collaboration is selecting the talent and proposing a broad stroke concept of the collaboration. The designer’s role is to build a concept into finished drawings and specifications. At this point Sam will become a general contractor finding local craftsmen here in Chicago to build the designs.

[DA]Sam, as an events-based gallery, your model is to seek out and then cast the talent and once they submit drawings and specs you become a general contractor so to speak, and take over the outsourcing and management of the fabrication. Is this unusual?
[SV] I don’t know if this is unusual and you might ask Alex. But that’s kind of how we started. Helping the designers along as a resource base to build the projects. At first I would just pass the info between designer and fabricator but it became a bit tedious being the go-between once the project got rolling. It became more efficient for me to take over and handle the production here in Chicago. And we go elsewhere as needed to find a fabricator.
[AW] From our end it is pretty typical. The drawings are in our office and the fabricators can be anywhere, Asia, Europe. We are very hands-on in our office where we experiment and tinker. That said, with this many special pieces and the distance there was a new element involved. But very exciting. We got to learn a whole new city. We discovered new resources, new craftsman. A bit like surgeons doing surgery remotely. Like repairing soldiers in a battlefield while the doctors are someplace else.

[DA] Alex, you mention hands-on so let’s talk about your firm’s process. What’s the difference between production projects and limited editions?
[AW] There are a lot of differences. Audience is one of them. Designing for production we are designing for a broad audience base where the numbers could be in the thousands and the objects are more or less the same and there are elements of efficiency, economy and scale. With limited editions the goals and objectives are completely different. For example, doing limited really pushes our studio process to experiment with materials, which we really love to do. And you’re trying to create something special but you’re really not sure of what you will end up with when you start out. In effect, we are now looking for magic.

[DA] How do the three of you work together, or do you? What are the individual strengths you bring to the partnership?
[AW] Though anyone of us can bring in a project our process is entirely collaborative, we don’t work on anything separately. We each bring something different and play off each other in the studio. I am not the artist of the group but I’m a pretty spontaneous thinker. Theo has a great mind for strategy and relationships. Charlie has a great mind for business and a knack to work through the dealings with the vendors, a materials sensibility sourcing things, putting all the pieces together.

[DA] Would you agree that you share the same aesthetic?
[AW] No, I think we all have quite different aesthetics, actually as they apply to our personal lives and interests. But our three different voices are compatible. When they come together that’s what you see in our work.

[DA] Back to you Sam. Who dreams up the theme, the title? What is the genesis of Proforma?
[SV] I’d say it started a year ago with a visit to their office in New York. We don’t give the designers perspective. We don’t ask for anything particular. We want them to come to us with a broad range of ideas or a very specific idea. And then we work with them to develop a collection. Four months later the designers propose seven to eight pieces and we narrow it down to five and then begin talking about materials. And then, all of a sudden, we have a collection. The gallery has a very little to do with the theme, the titles, the names of the pieces. That all comes from the studio. We just sort of guide the designers, to push them into an area that they may be uncomfortable with. We’re looking for a collection that has a broad range and a wide perspective. But still has a narrow focus.

[DA] I just finished reading an interesting article in Vanity Fair where Ridley Scott is casting the stars in Thelma and Louise, which was over a year-long process. Sam how did you and Claire select this studio?
[SV] Claire and I made a list of talent back when we were talking about starting a design gallery. It wasn’t a very long list. In fact, it was a pretty short list. The talent that caught our eye in our minds were doing something a little special. With Rich Brilliant we saw something special in the “Excel” line, which they produced in 2008. The use of materials, the proportion and scale of that line led us to want to talk to the designers.

[DA] Alex, your firm was founded in 2007. Were you guys every approached in this manner before?
[AW] You mean from a design gallery? We were coming to a place out of school, being exposed to work in New York City, sort of the tailed end of what people think of as art, an artist-driven world of excessive limited edition designed objects. A lot of that work we were thinking about as we began forming our studio. And then we went to Design Miami in 2008 and right from the get-go we were inspired in many ways by the boundaries that were being pushed by the Galeri Kreo in Paris, who showed how the Bouroullec’s were working with ease in both the gallery world and consumer products. So there was a desire from the beginning to create and show that kind of work. But Sam and Clair provided the first relationship that made sense. We were approached by someone at the same level, pretty much starting out.
TO BE CONTINUED… [ Interview2 ]

next up: clarifying the nature of the design gallery concept; identifying distinctive cultural identities of English, Italian, French, and American designers; the economics of limited edition vs production design; among other things.

what when where: “Pro Forma,” the first solo exhibition of the work of Rich Brilliant Willing, the New York design studio, at the Volume Gallery in Chicago. The show features five pieces inspired by airplane shipping containers. Each piece, made in editions of 12 to 16, is being sold with two bases, one vertical and one horizontal, to allow for dual uses of each design.

“The materials we’re using refer to a lost era of luxury travel,” said Alex Williams of RBW. “While actual containers are made of rough industrial materials, like raw aluminum or plastic parts, we’re taking the luxury approach to them by using leather, brass and beautiful hardwoods.” The firm’s partners, Williams, Charles Brill and Theo Richardson. 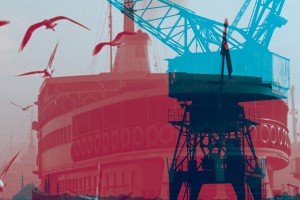