Another USA financial crisis casualty. This bit of news not about Joe the plumber. On the contrary, it’s an example of the very wealthy feeling it. Make you feel better? Probably not.

Architect Santiago Calatrava is in the news suing the developer of the Chicago Spire.

“The Chicago Spire’s penthouse may be sold but there is growing doubt whether the project will rise out of the hole that’s been created at 400 N. Lake Shore Drive.

Consultants on the project are starting to line up seeking payment for their work on the development, designed to become the tallest skyscraper in the United States and one of the tallest in the world. The most well-known of the consultants, architect Santiago Calatrava, filed a lien on Oct. 8 through his Lente Festina Ltd., seeking more than $11.3 million in payment from Spire developer Shelbourne Development Group Inc.

Separately, Chicago-based architectural design firm Perkins+Will Inc. filed a lien against Shelbourne for almost $4.85 million in payment. The two liens were filed with the Cook County recorder of deeds.

The liens suggest the project’s financing, as well as its feasibility, is shaky.”

Recently, Donald Trump was in town to top off his 92-story Trump Tower. Here is an excerpt from the Chicago Tribune

DA editor’s note: Struggles of this scale and stature have not happened very often in the U.S. In other parts of the world it may be more commonplace. One enjoyable and very enlightening exhibition I attended at the Art Institute of Chicago was on Russian architecture. All the buildings on display were never built! Things were ( are? ) so bad in Russia at the time that the frustrated architects, who never could get funding, had competitions of concepts only. The guest architects laughed about the great deal of vodka drinking and story-telling taking place at these competitions. Creative therapy in action.

Let’s hope everything works out in the end. From a design perspective, Chicago would like to see a Calatrava somewhere in town – his work, inspirational. If it has to be utilitarian in this economic environment the city has many needy bridges. Until then, the Milwaukee Art Museum, an hour away, will not disappoint, especially at sunset when the “wings” unfurl.

( above ) Image found one week after original post: dynamic architecture next big thing! Inspiration strikes in the most unlikely places.

from the air, you can reveal things about the land you can’t know from the ground. 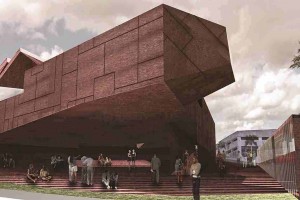 in my career I have sought to cross creative platforms and to focus on the creative discourse surrounding the act of making things.