an architecture biennial unveils avant-garde ideas, materials, technologies and practices and serves as a forum for architects to make connections, collaborate with others and engage the public in issues and concerns in the field. the biennial also recognizes outstanding work in the industry.

the graham foundation is pleased to present the available city, part of the fourth edition of the 2021 chicago architecture biennial (cab). this edition marks a new approach to the biennial model, bridging the traditional exhibition format to a deeper engagement with the community to expand access and impact. offering opportunities to discover installations, exhibitions, and programs that explore transformative possibilities for vacant spaces in communities worldwide. the available city is curated by designer, researcher, and educator david brown. as artistic director, brown activates his ongoing, decade-long research project to document and reimagine new futures for vacant lots in american cities, including the more than 10,000 city-owned vacant lots in chicago. with over 80 contributors from more than 18 countries, and more than 100 cultural partners, the available city includes 15 site-specific architectural installations: located on public and private lots located in chicago’s neighborhoods of north lawndale, bronzeville, woodlawn, englewood, pilsen, and the south loop. there are also two exhibition-based explorations located in an unused storefront space in bronzeville and at the graham foundation (see below).

at the madlener house (see below), the available city projects investigate how a community-led design process can create new spaces in the city. the graham exhibition includes projects by  christophe hutin architecture (bordeaux),  departamento del distrito (mexico city), drawing architecture studio (beijing), el cielo (mexico city), enlace arquitectura + ciudad laboratorio (caracas), fala (porto), and riff studio (ny). along with the presentation of the departamento del distrito project at the graham, there is also a concurrent installation at inga bookshop, in pilsen. together, inga serves as one of the three bookstores—with buddy, at the chicago cultural center and the graham foundation—that distributes printed matter and titles related to cab.

the installations located within the graham foundation / madlener house, 4 west burton street, 60610, from noon to 5pm wednesday thru saturday. 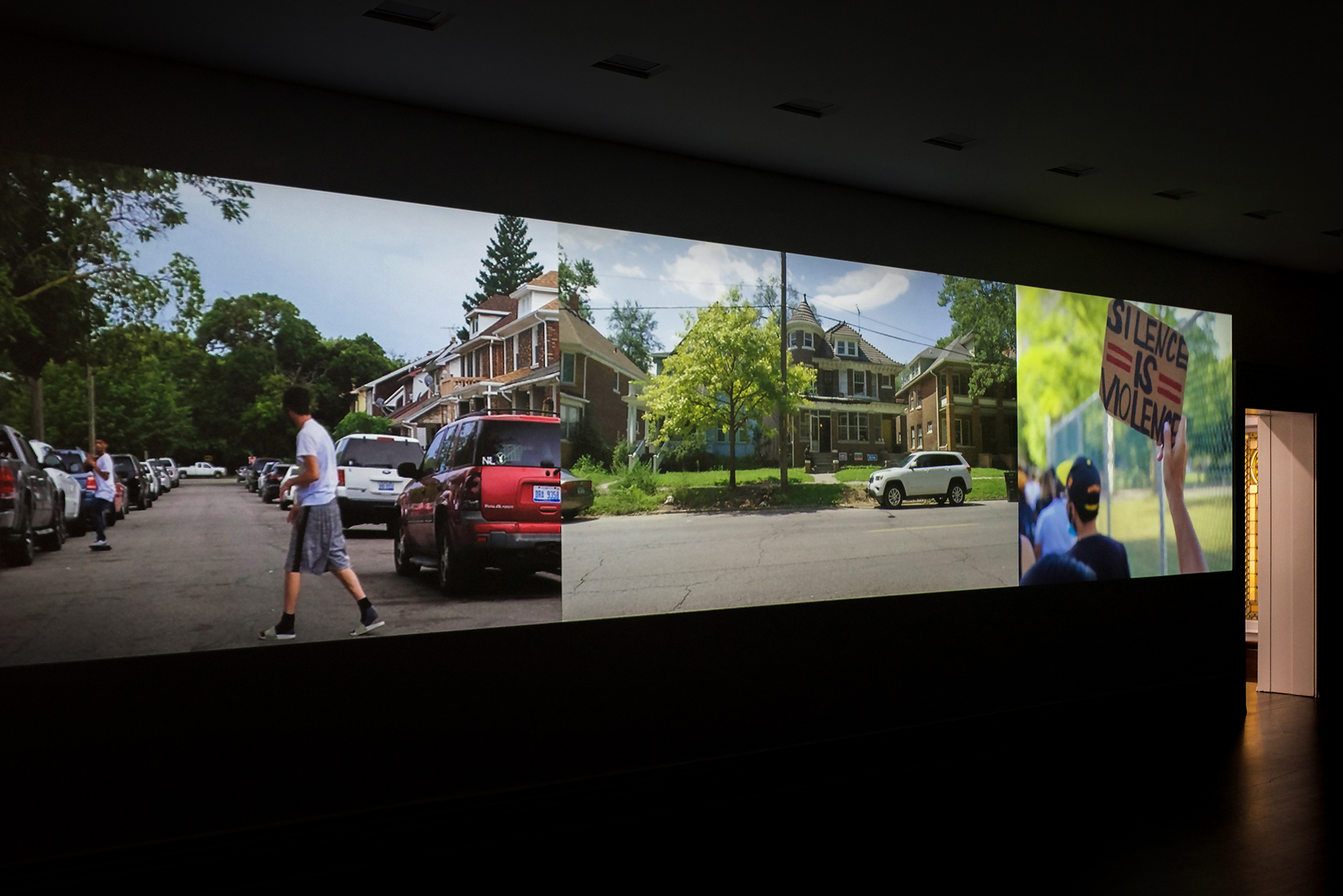 the film communities at work reflects on the meeting between architectural know-how and the inhabitants’ own experiences of their living spaces through case studies in france, south africa, vietnam, and the united states. this transverse approach to the profession is an attempt to shed light on the implications of architecture in a contemporary world subject to massive changes. 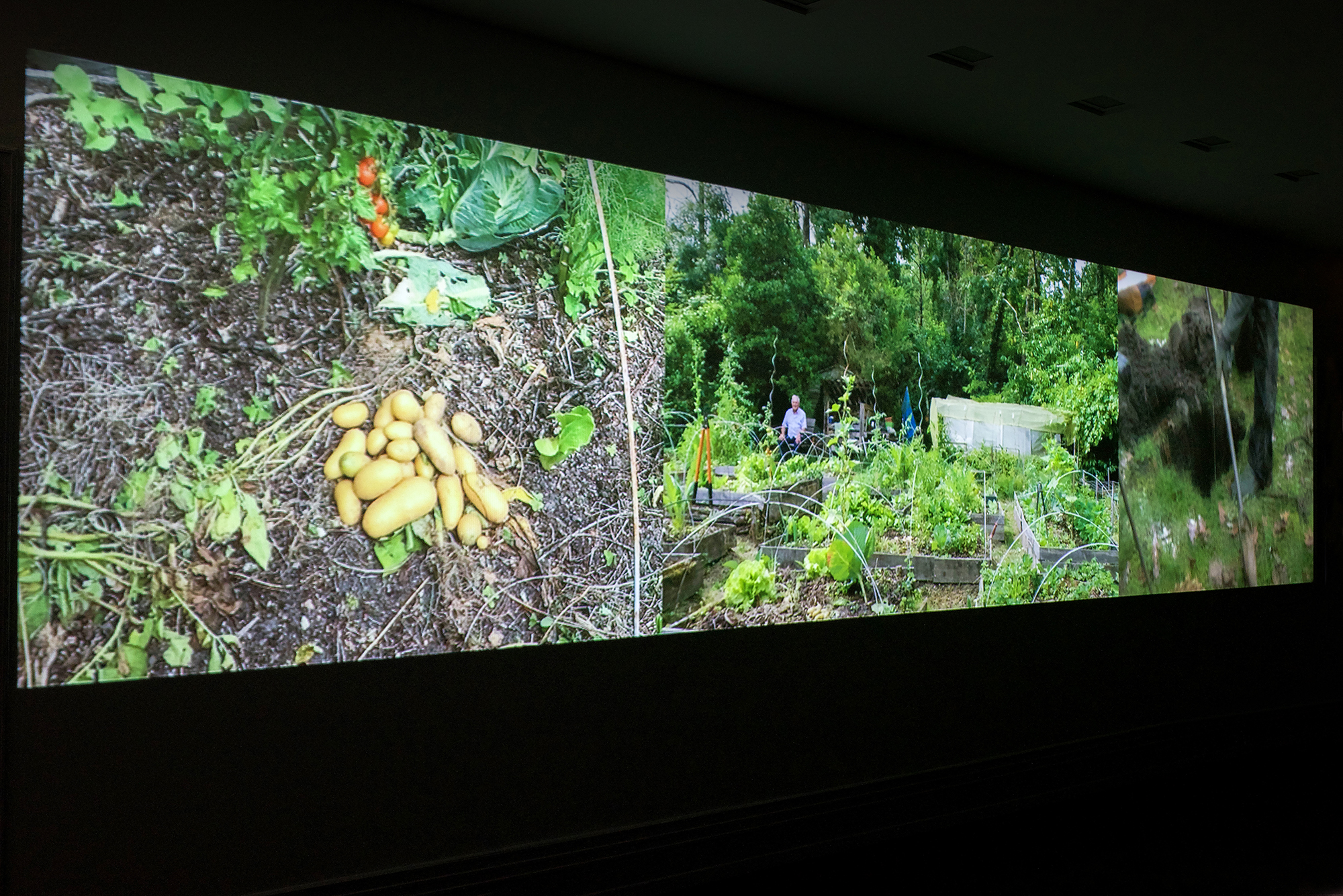 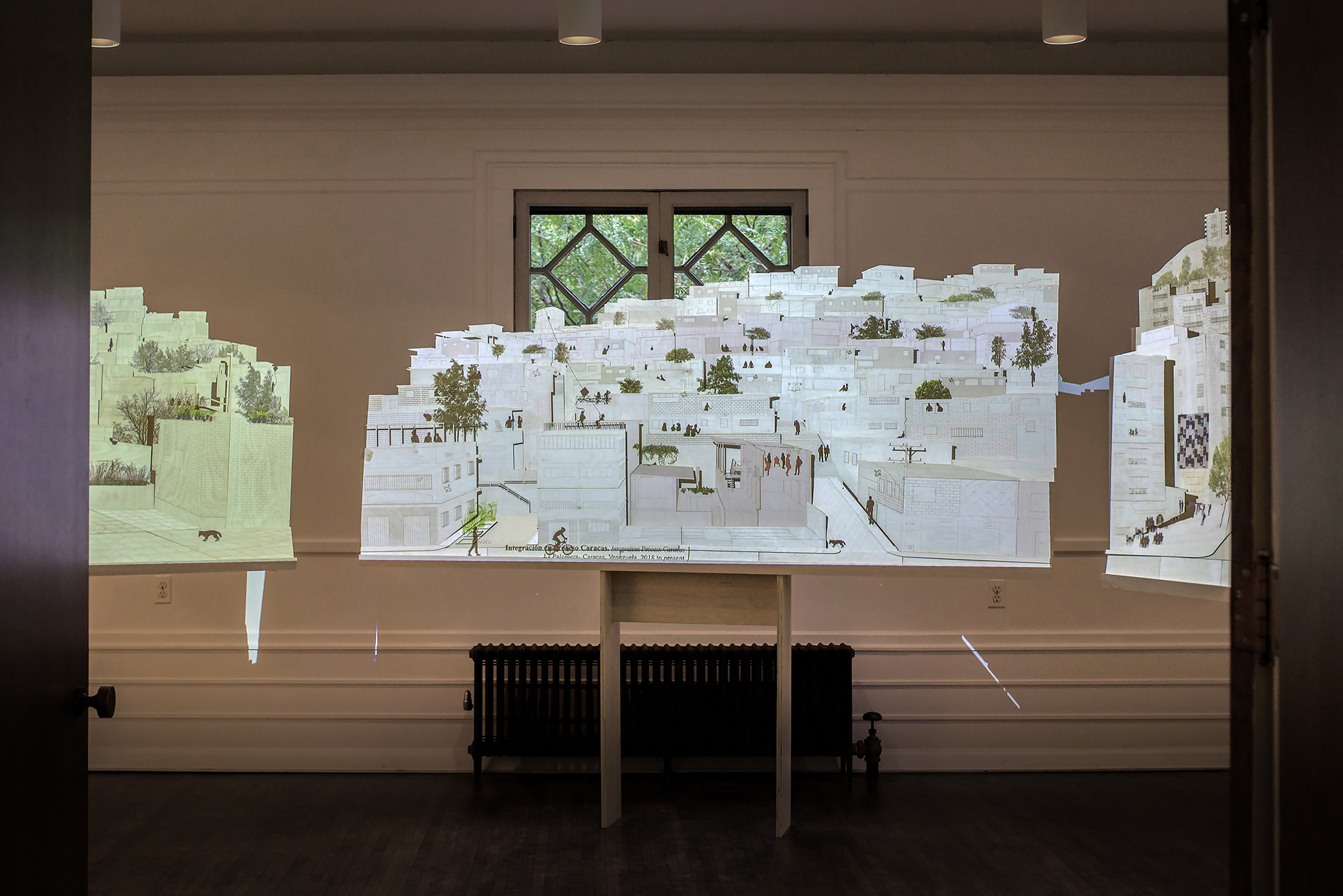 the intertwined histories of the diverse neighborhoods of la palomera, colinas de bello mondte, and el cavario in caracas demonstrate the potential for new democratic urban processes. they do so by creating platforms that emerge from, and in favor of, plurality and a mixture of voices. in the gallery each neighborhood is represented by a modeled stage. 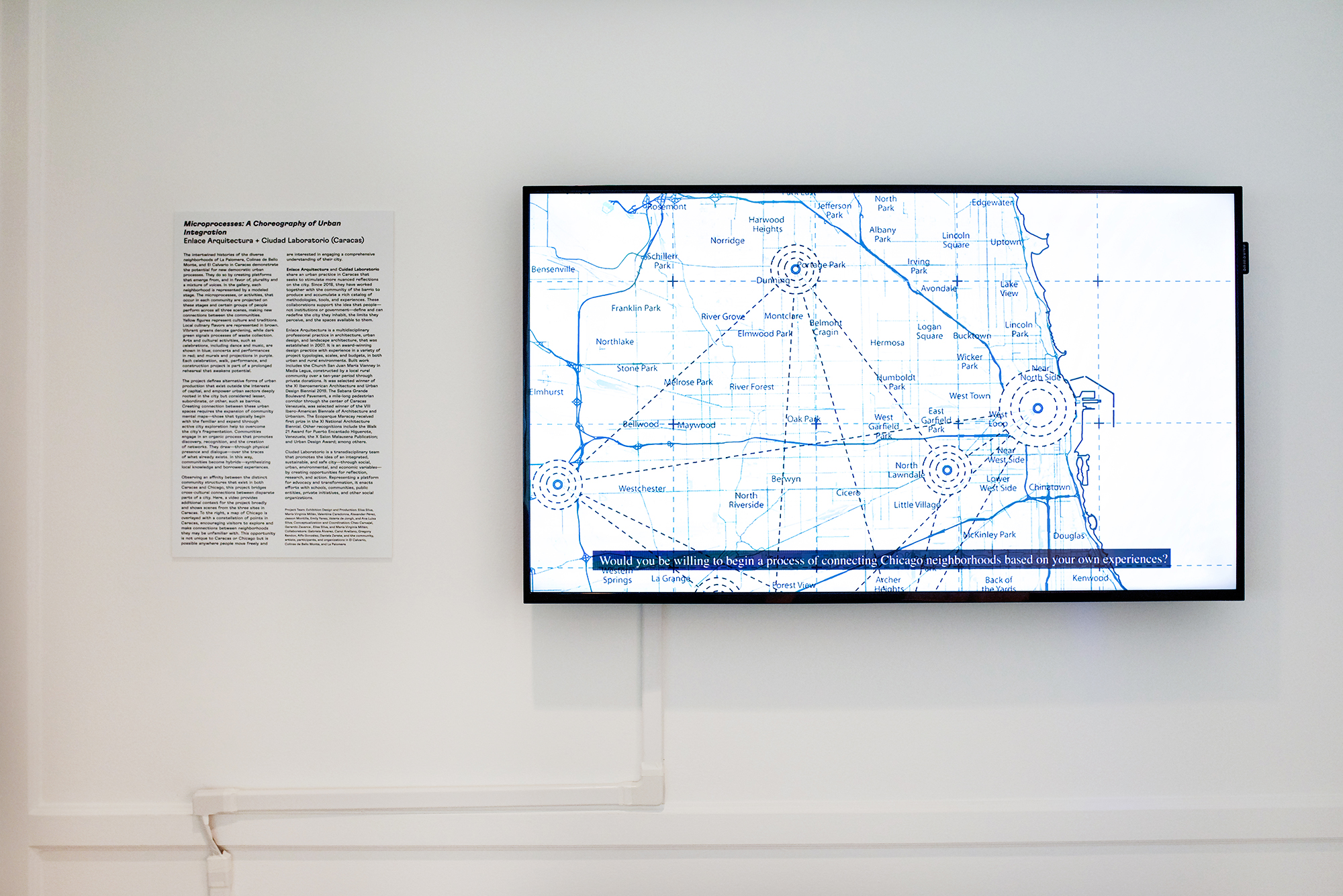 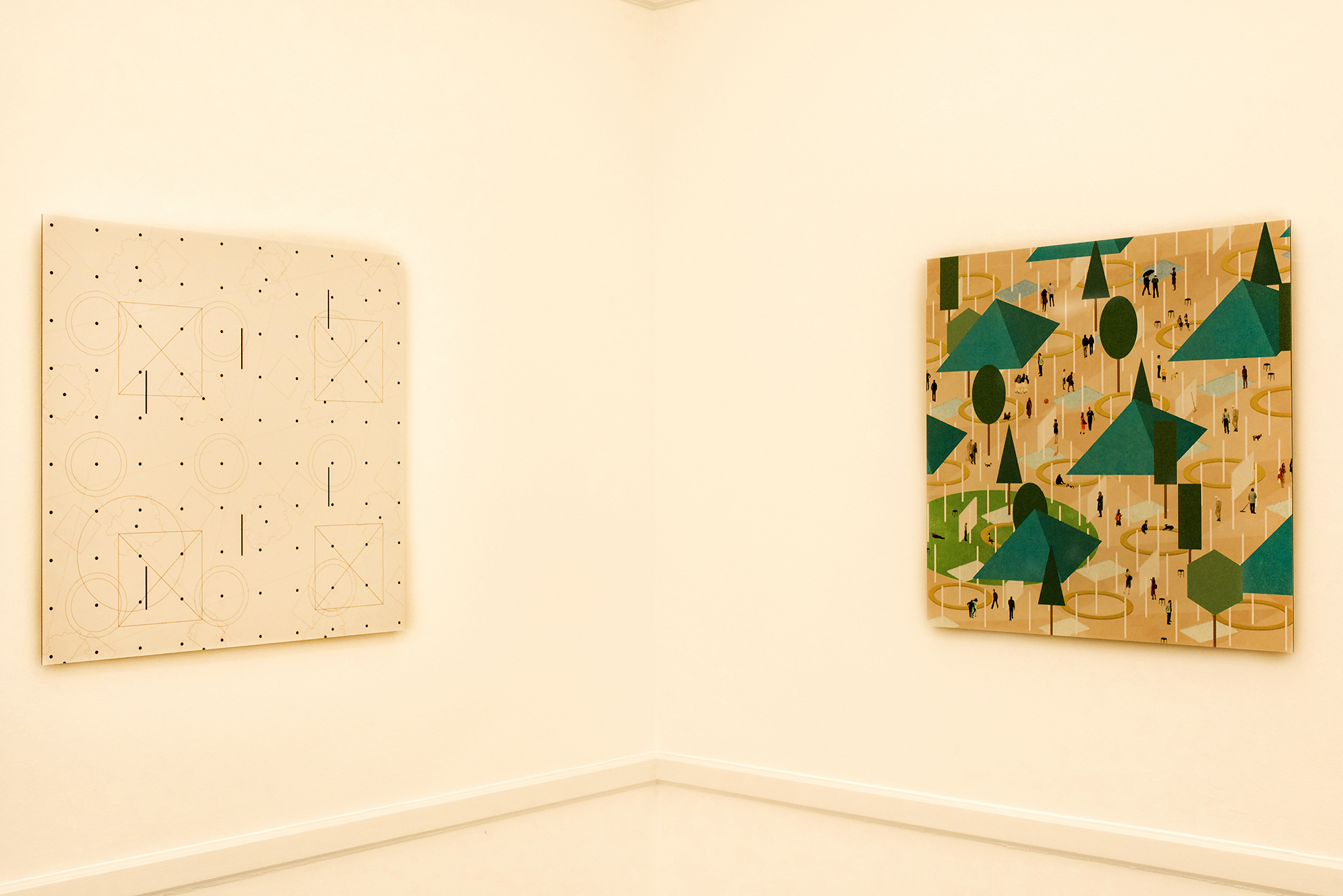 the field of elements can take over any plot of the city. it can also be reconfigured and appropriated according to the needs of the neighbors. circular benches for intimate gatherings, pyramidal roofs to shelter activities, fields of grass to lounge on, mineral pavements to play on, and trees providing shade.

fala is an architectural firm leb by filipe magalhaes, ana luisasoares, and ahmed belkhodja. in 2020 fala was selected as one of the fifty most relevant young offices in the world by domus magazine. 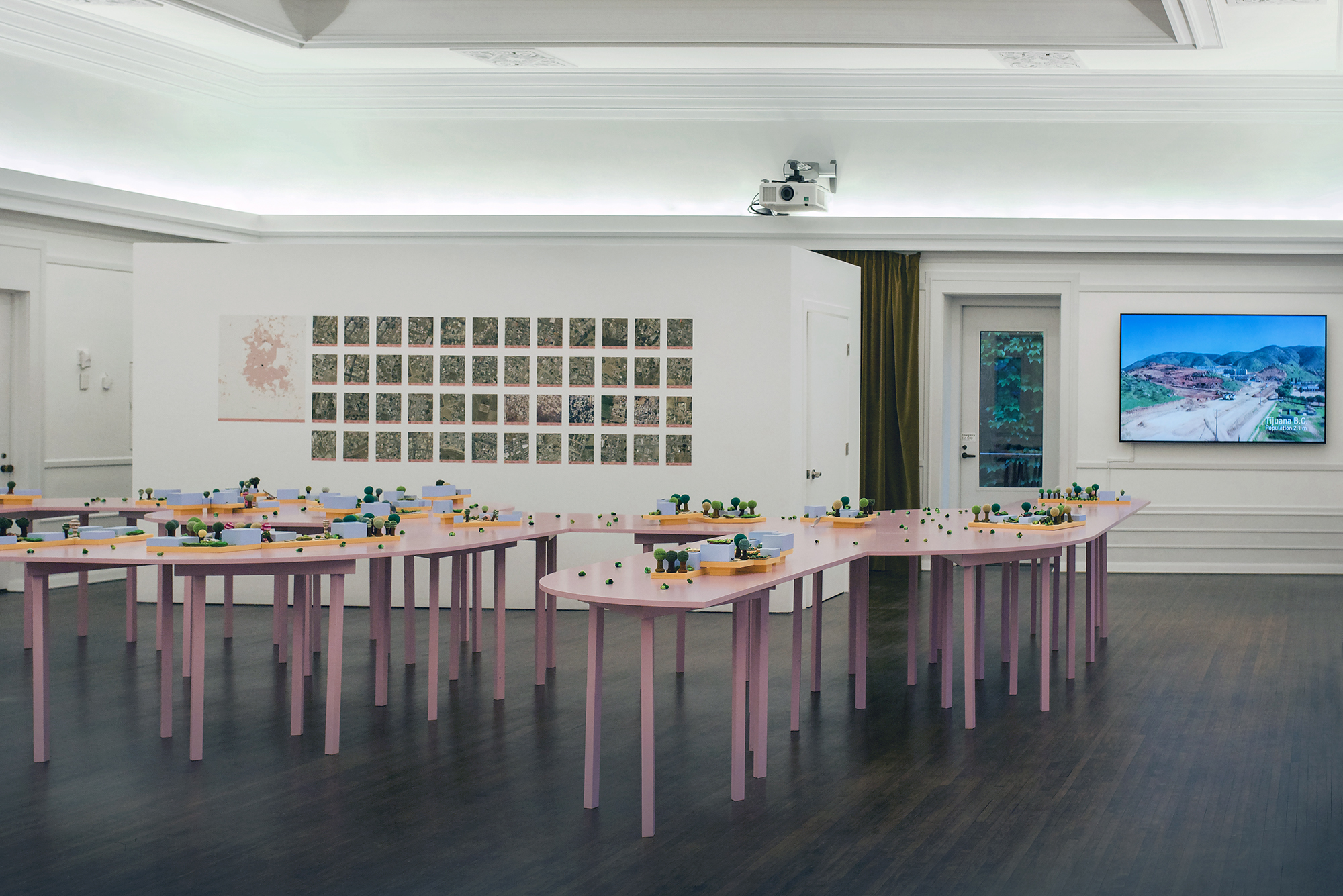 the metropolitan area of mexico city has a population of approximately 22 million inhabitants. more than 60% of its surface has been urbanized by means of informal settlements that consolidated over time. for this project, 48 lots selected across neighborhoods in mexico city were selected to be reproduced as models and presented here for visitors to rearrange and imagine a new urban landscape.

this project delves into the opportunity that the informal/formal state of flux presents as a process of the production of space at this moment of crisis. according to many projections, housing demand around the world will almost double by 2100, with a very significant increase occurring in the global south. additionally, climate change-induced migrations are expected to grow in the coming decades and many developed countries face a deficit of affordable urban housing due to rising demand and costs of construction. 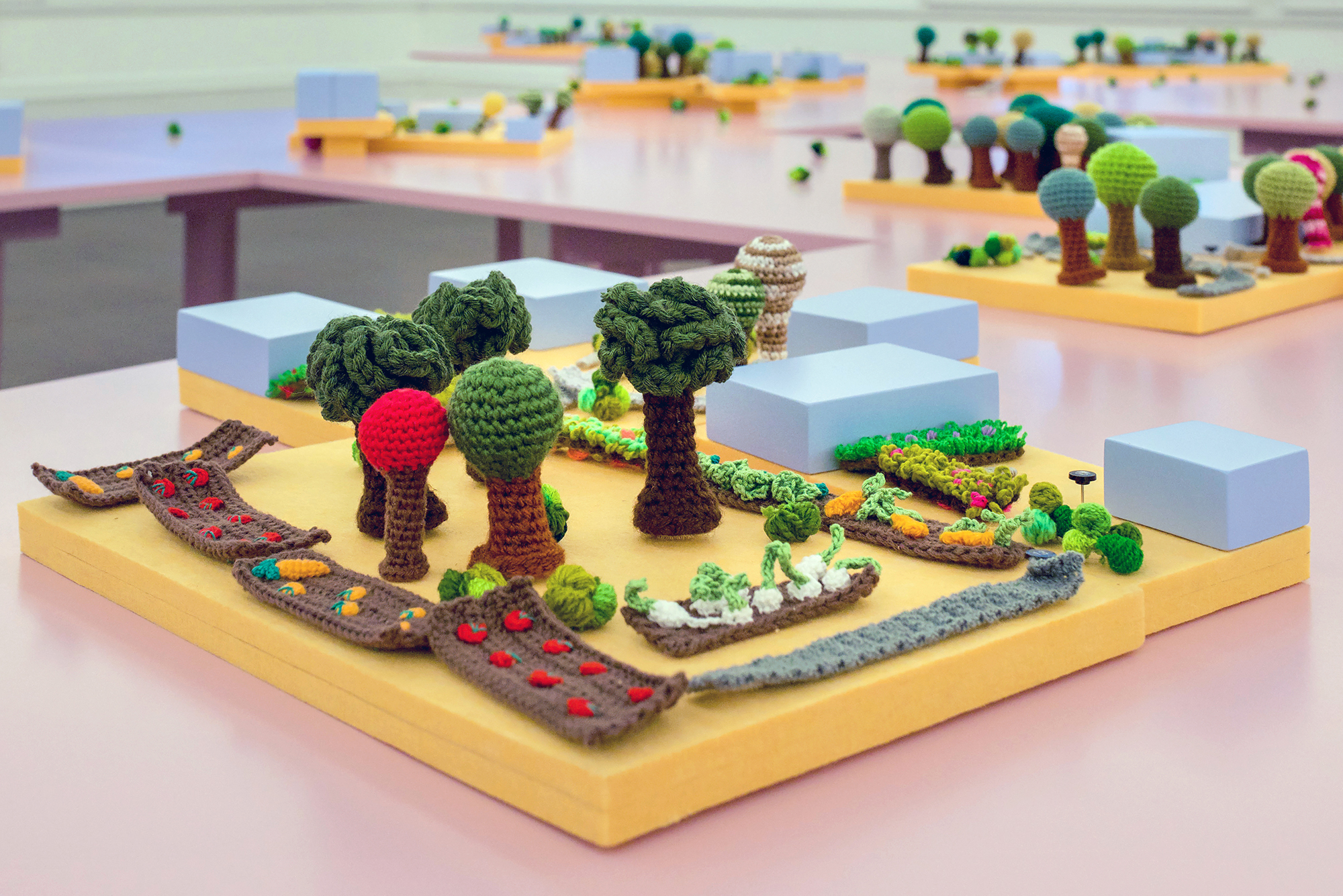 el cielo is an architectural and urban design practice founded in 2004 by armando hashimoto and surella segú. from 2013 to 2018, hashimoto and segú worked in sustainability at the institute of the national worker’s housing fund (infonavit) where they were responsible for the generation and implementation of urban strategies and regeneration programs in deteriorated housing complexes and abandoned housing nationwide. their work has been selected to participate in the venice, beijing, seoul, and pamplona biennales. segú is a loeb fellow of the harvard university graduate school of design, a member of the national housing council, and also a strategic advisor for the agrarian, territorial, and urban minister in mexico. segú and hashimoto are currently fellows of the national system of art creators of mexico. since 2019, el cielo has expanded to encompass architecture, urban planning, research, and consulting projects in urban development, housing, and community. 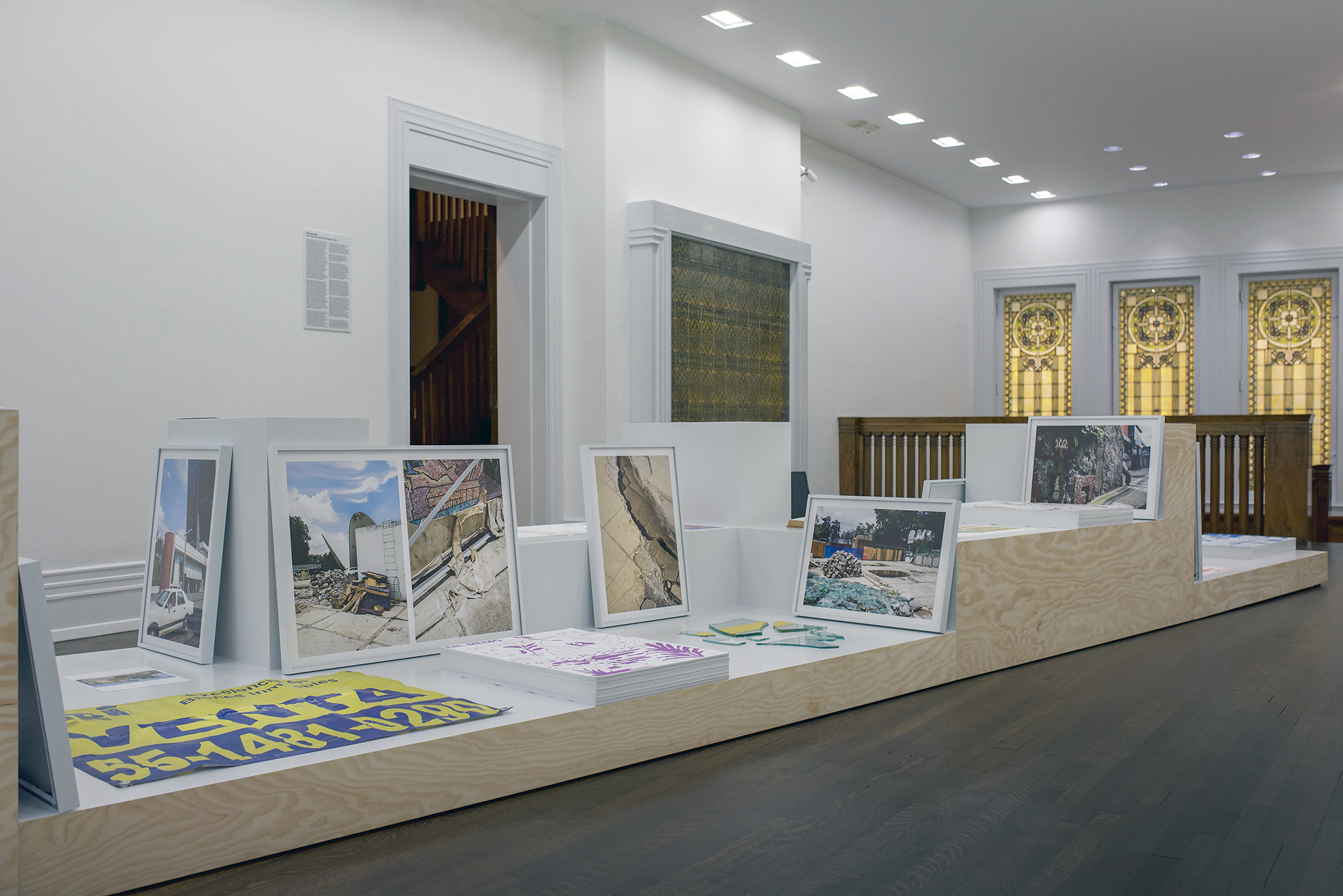 this installation provides an overview of the milagro mexicano and its material products, with specific case studies providing the main content on display. miracles, now seeks opportunities of recovery and reinvention within the remains of urban and architectural projects constructed during the so-called milagro mexicano or “mexican miracle.” this exceptional period of sustained economic growth between the 1940s and 1970s spurred the formation of mexico’s modern identity, one specifically produced and marketed for a global audience. visionary as it was, the social and political limits of this centralized effort have been laid bare by the government mismanagement, privatization, and environmental disregard that have come to define urban development trends in the nation’s capital over the past four decades. 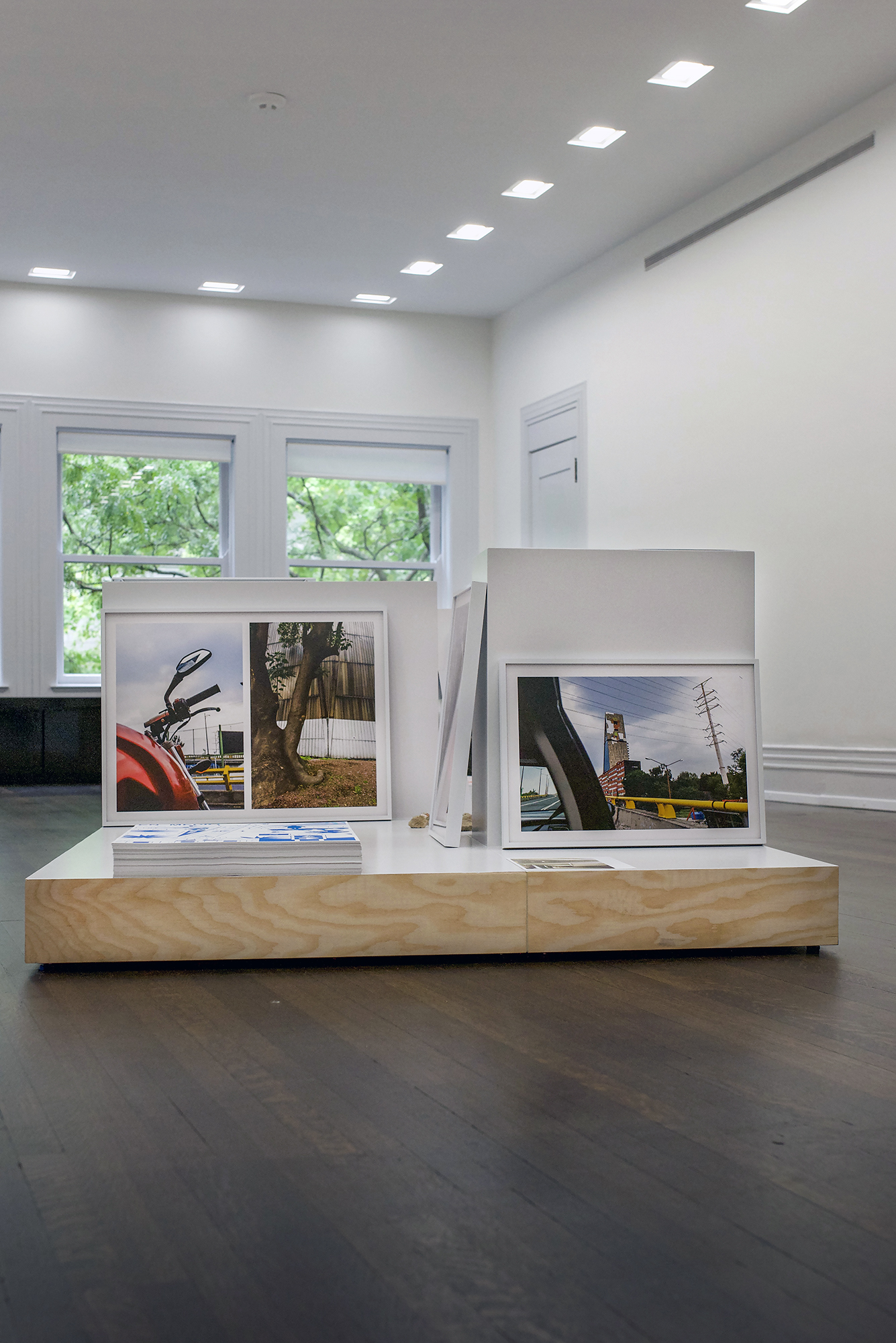 departamento del distrito is a mexico city-based design practice founded in 2017 by francisco quiñones and nathan friedman. their work lies at the intersection of politics, identity, and the built environment. in addition to architecture, their practice engages archival research, writing, and speculative work. recent projects have been supported by the graham foundation, the fundación jumex arte contemporáneo, and the fondo nacional para la cultura y las artes (fonca). francisco quiñones is a practicing architect in mexico city and adjunct professor of architecture at universidad iberoamericana. nathan friedman is a practicing architect in mexico city and a 2021-23 wortham fellow at the rice university school of architecture. 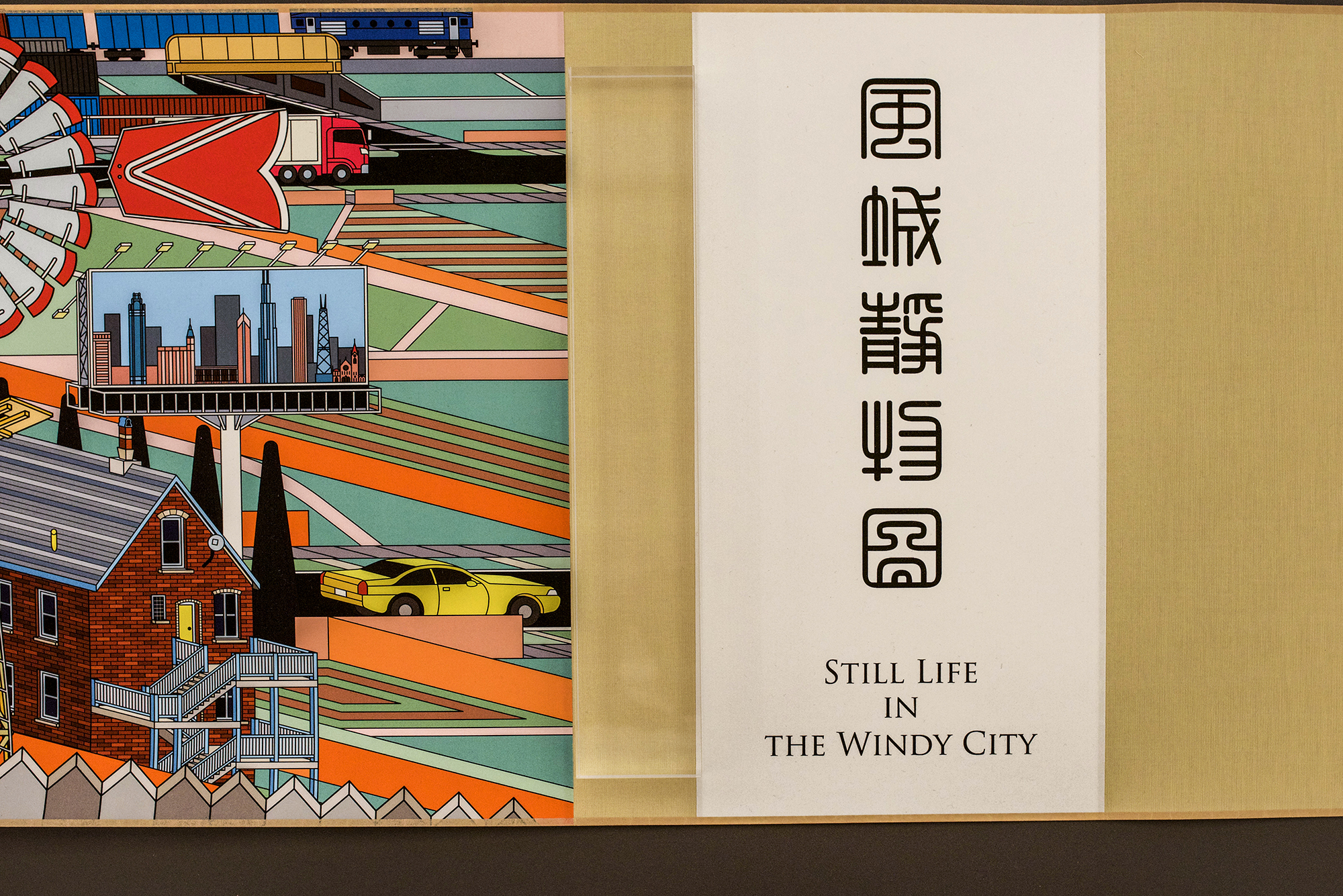 a traditional still life portrays objects arranged on a table; this drawing, in the form of a traditional chinese scroll, extends the definition of objects to the scale of the city. still life in the windy city illustrates life in an imagined community in the southwestern suburbs of chicago that drawing architecture studio developed referencing public space in beijing. in both chicago and beijing, found objects may play a more powerful role in the community public space than architecture. compared to architecture, objects are independent from their surroundings and are not bound to a fixed location. 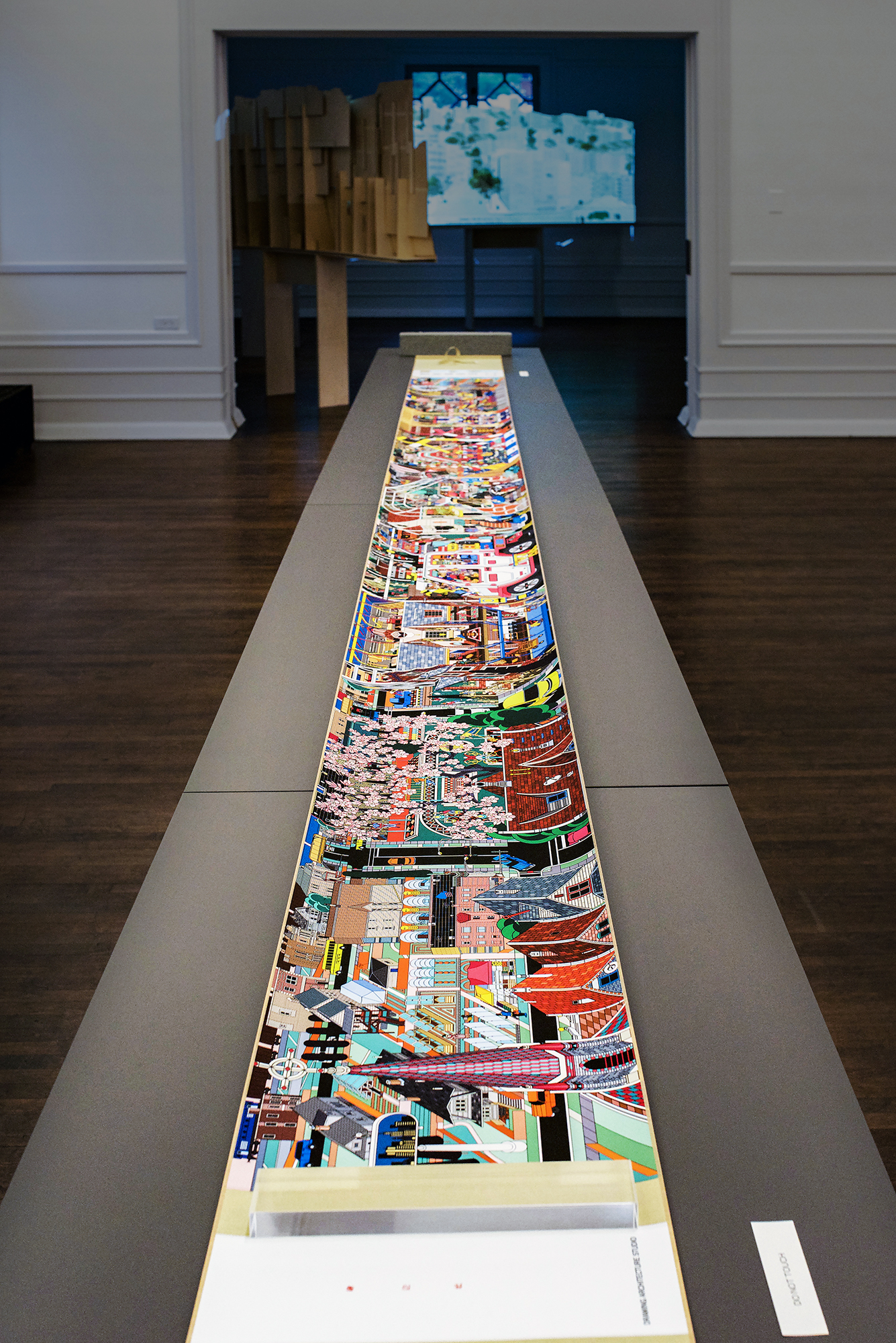 [ above/below ]
[ up from the past: housing as reparations on chicago’s south side / riff studio / new york city ] 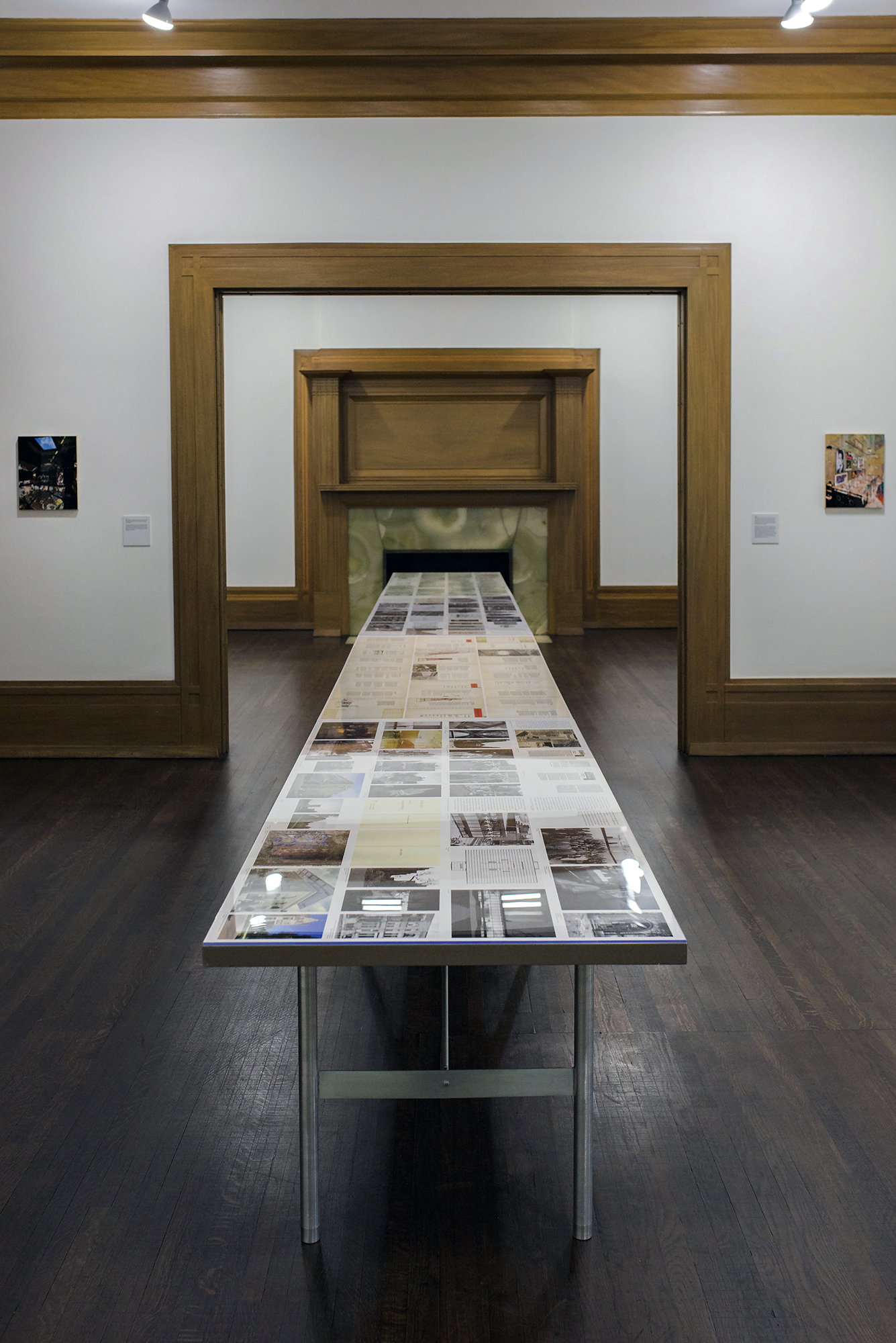 the presentation of up from the past: housing as reparations on chicago’s south side, represents research and work on bronzeville’s black metropolis (ca. 1920s-1950s) that isabel strauss of riff studio first engaged while studying at the harvard graduate school of design. grounded in her thesis project, entitled ‘architecture of reparations,’ the project includes rigorous study of public policy’ site analyses’ history; and research on reparations and monetary restitution, that ultimately took the form of a public request for proposals (rfp) to explore reparations in the form of housing on a local and national scale. 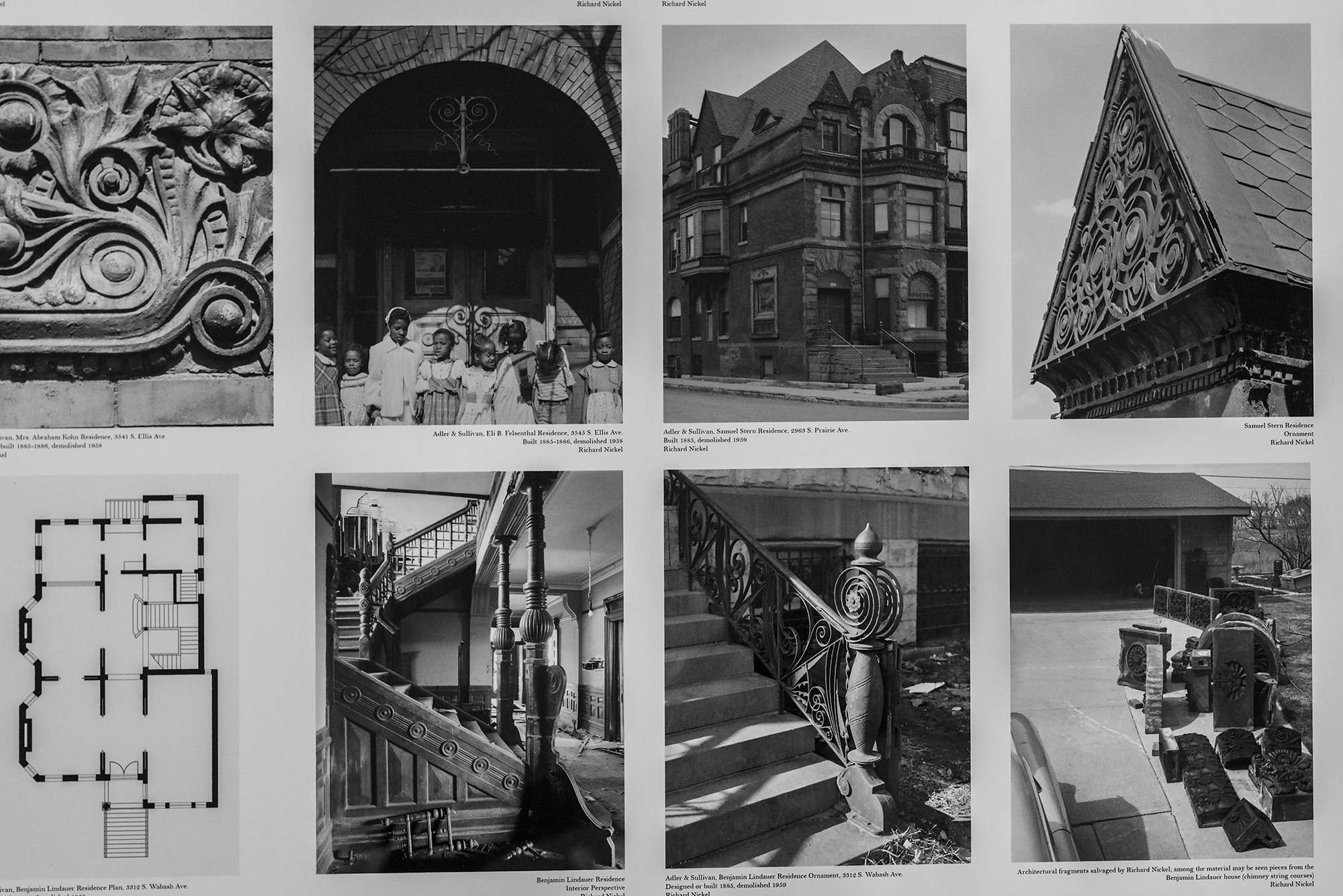 riff studio is a newly formed new york-based collaborative that brings together designers rekha auguste-nelson, farnoosh rafale, and isabel strauss, with zena mariam mengesh. strauss holds a master’s degree in architecture from the harvard graduate school of design. she is from the south side of chicago.

look for DesignApplause to spell out these events in weekly separate articles.

photography by gloria araya
this is a developing story… 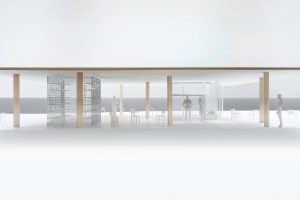 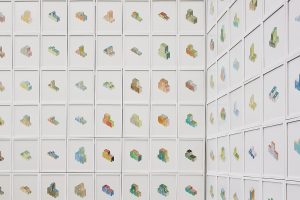 the serial nature of these works might suggest a reading against a lineage of art from the 1970s often called process or serial art, which exhausted an idea or concept in a monotonous way. 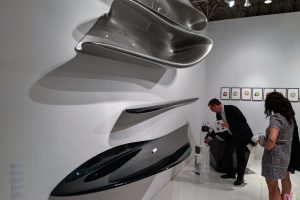 what is the difference between art and design? i think it comes down to function. design can have many functions, whereas art has one single function. the function of art. the question of what's the difference between art and design often comes up at art expositions, perfect launchpads for such a confabulation. in this instance, DesignApplause submits that architecture, design, and engineering are one and the same.