In honor of the 125th anniversary of the Bernhardt furniture company, several designers have produced new chairs. Ross Lovegrove’s Anne chair, named for the company founder, is a real surprise. Lovegrove produced his iconic Go stacking chair, of magnesium/aluminum, for Bernhardt This walnut chair is radically different. It’s based on the American courthouse chair—a perhaps surprising inspiration for the Welsh born Lovegrove but a solid, democratic form based on the Windsor chair. The courthouse chair is to be found in many classic films think the spirit of Gregory Peck in To Kill a Mockingbird. 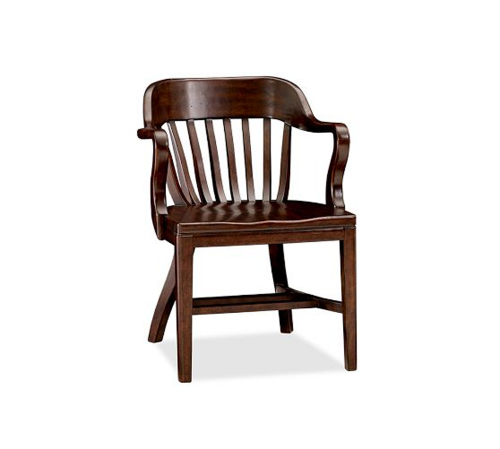 Lovegrove’s take on it is a smart exploration of traditional wood, from someone who has spend more time with plywood, polycarbonate or magnesium. The chair is built by both traditional craft work and seven axis CNC machines, he said. For the leather seat, he thought of a pair of jeans bought pre-aged: he wanted the leather to seem sat in and crushed down already. It looks more like a flopped cushion than attached seat. Lovegrove shrewdly observed that many new things are sharp and off-putting, but things that we use and feel familiar to us have been softened by use. If you know the rest of his work, the bio futuristic side if you will, then the Anne chair is witty—a comment. It suggests a mellower Lovegrove? But it also suggests Art Nouveau. [ ross lovegrove ] [ bernhardt design ]