canadian designer matthew mccormick is proud to present avalanche, a temporary installation at the victoria & albert museum for the 2019 london design festival. a highly experiential exhibit, the installation seeks to fuel thoughtful introspection on the effects of climate change through the artist’s interpretation of what it feels when trapped inside a torrential snow slide – a tangible result of our planet’s fluctuating weather conditions.

a nod to the chaos and power driven by mother nature on our environment, mccormick marries light with material within an imposing, seamlessly executed box at the v&a conspicuously located on the landing of the british gallery. the exterior exhibit highlights mccormick’s contemporary design ethos in the classically historic space, making it impossible to ignore. from within, it is a hybrid between an interactive reflection chamber and an artistic metaphor representing a skewed sense of scale and reality. more specifically, it is a designer’s interpretation of a suspended moment in time where visitors are caught in an avalanche and faced with a mindful revelation of their own mortality.

bamboo (竹) ring, or ‘take-wa 竹わ’, is an experiment in the concept of weaving, as explored by kengo kuma.

japanese architect kuma (founder of kengo kuma & associates) has most recently designed the v&a dundee, his first building in the uk, as well as the new national stadium for the tokyo 2020 olympics along with taisei corporation and azusa sekkei.

inspired by the john madejski garden and curated by clare farrow, the doughnut-shaped structure – like a nest or cocoon – has been created by weaving rings of bamboo and carbon fibre together. for kuma, working with ejiri structural engineers and the kengo kuma laboratory at the university of tokyo, the installation is an exploration of pliancy, precision, lightness and strength: by pulling two ends, it naturally de-forms and half of the woven structure is lifted into the air.

bamboo has been used traditionally in japanese architecture in part due to its linearity and flexibility, and as a symbol of strength and rapid growth. the basic component of the structure – a 2m-diameter ring – is made from strips of the bamboo phyllostachys edulis. by combining carbon fibre, a contemporary material, with the traditional material of bamboo and laminating each ring, the resulting effect achieves a certain rigidity while maintaining the unique material properties and beauty of bamboo – a remarkable, sustainable material that resonates with kuma’s childhood memories and looks into the future of architecture.

bamboo (竹) ring, or ‘take-wa 竹わ’, is intended to be a catalyst for weaving people and place together.

Postmodernism. The meaning and the genesis.

What does Postmodernism mean and where did it come from? That’s the question the Victoria & Albert Museum soon-to-be-unveiled film addresses, taking into account views of Robert A.M. Stern, Charles Jencks, Paula Scher, Reinhold Martin, Sam Jacob, Peter Saville, Carol McNicoll, Iain Sinclair, Zandra Rhodes, Andrew Logan, Deyan Sudjic, Malcolm Garrett and Sir Terry Farrell. Here’s the trailer. Hoping a sequel will address where did it go, what happened to it? [ v & a channel ] 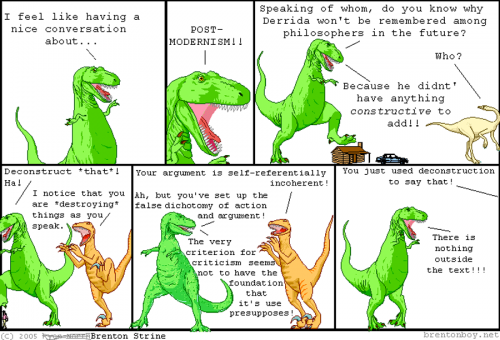