asked where he’s presenting during salone del mobile 2019 we get ‘the complete list’ of venues. grazie mille oki.

The loopiest design from milan 2011. 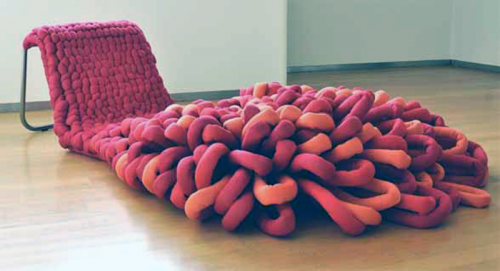 Born from a love of tufting, Danish furniture designer Sophie de Vocht’s “Loop Chaise Lounge” takes a technique typically reserved for carpeting and applies it to seating instead. Bright, playful and overwhelmingly tactile, de Vocht’s lounge chair practically begs to be touched and, of course, lounged upon. 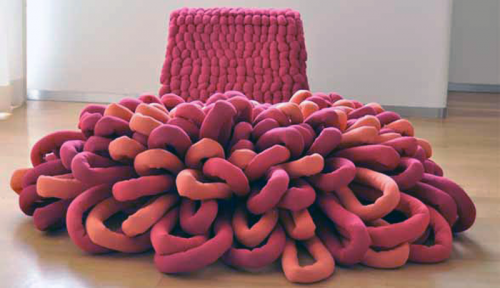 To create it, de Vocht wove over-sized yarn through a metal frame, tufting it tightly on the back rest and loosening (and brightening) it up along the length of the chair until it fans out and acts as a sort of carpet/ottoman.

Oftentimes really innovative furniture is a pleasure to behold and admire form afar, but actually using it can be an uncomfortable prospect. Clearly, that’s not the case here. The “Loop Chaise Lounge” is as inviting as a pile of freshly raked autumn leaves, waiting to pounced upon or curled up in. See other examples at salone internazionale del mobile 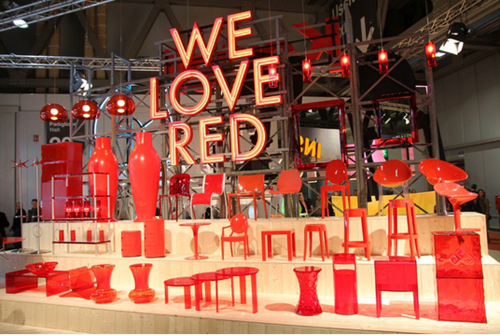 left: kartell
Apartment Therapy called this year’s show-stopping booths “a mix of design carnival, furniture circus and visual theme park,” and if we’ve learned anything so far from Salone Milan this year, it’s that designers love a good show. Years of planning and hard work go into each and ever product featured on the exhibition floor, but what would these designers be without a good display? Out of the hundreds of chairs at Salone, what draws your attention to one and not another? Let’s take a look at who’s sitting down on the job and who’s strutting their stuff.

Kartell’s unabashed use of red is real winner in my book. Displaying all their wares side by side in a single color is also an effective way to show off the individuals designs without distraction. It’s simple, bright and straightforward, and the flawlessly executed big, bold lettering is downright eye-arresting. 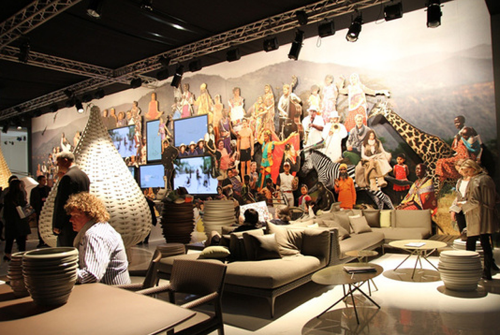 I also love the collaged wall mural Dedon used. Their mostly neutral-colored wares benefit from the backdrop of bright shapes and patterns. 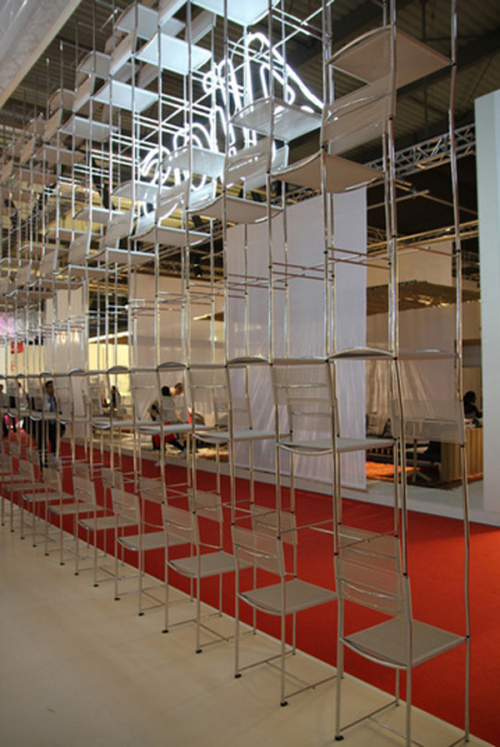 Lastly, Alias wins for cleverness with their great wall of stacked chairs. Talk about a way to effectively display your product while using the product as the display itself. Of course, it doesn’t hurt that all of these booths also have stellar products to hawk. 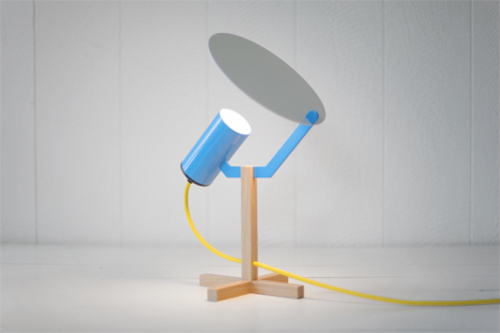 Big Bounce, “inspired by lighting techniques used on film sets” — we learn that reflective bounce can soften the hardness of high power LEDs. The lamp is made of FSC Certified White Oak, powdercoated laser cut steel. May be purchased through the designer. 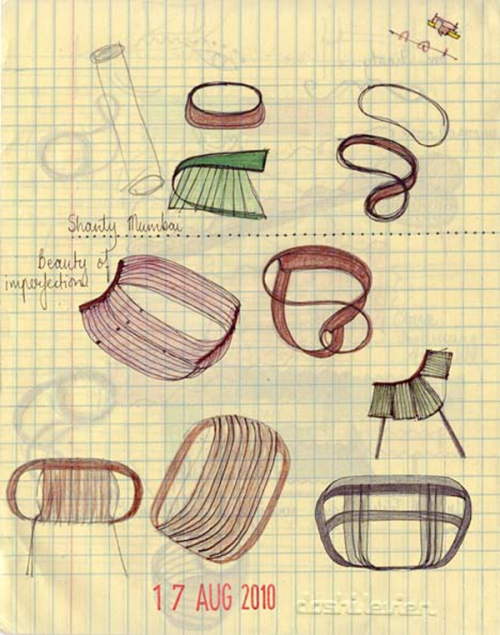 impossible wood by doshi leaven for moroso — via dezeen

upon arriving in milan my intentions were to focus on examples of concept development, i.e., the sketch. but from the get-go that focus was lost. here are but a few examples. next year. 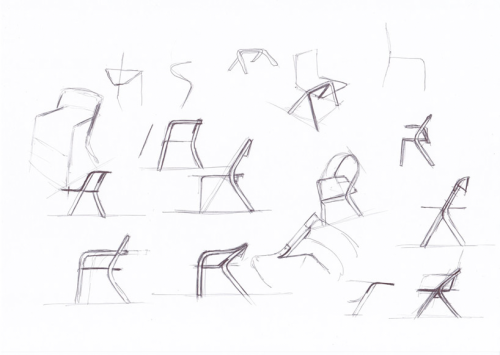 chair 002 by jaroslav jurica for ton — via designboom 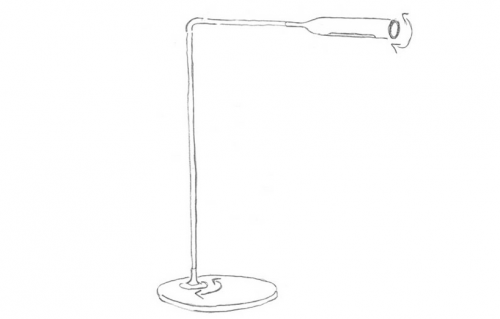 flo by
foster + partners for lumina — via designboom

below: three concepts to finished piece. 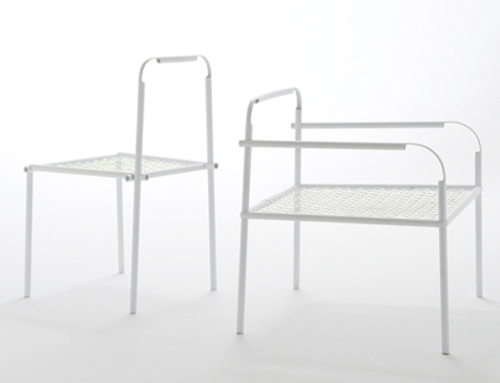 bamboo-steel chair by nendo for yii 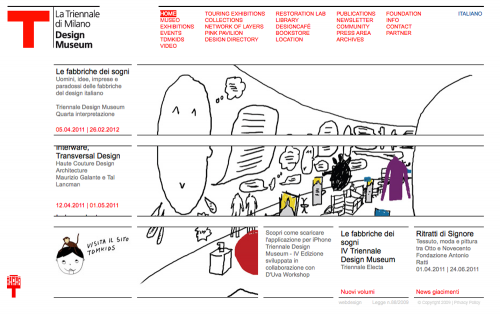 For design addicts, yet another thing to visit while at milan 2011. You’ll get the best of both worlds. The new and the timeless classics. Try to fit it in, you won’t be sorry. 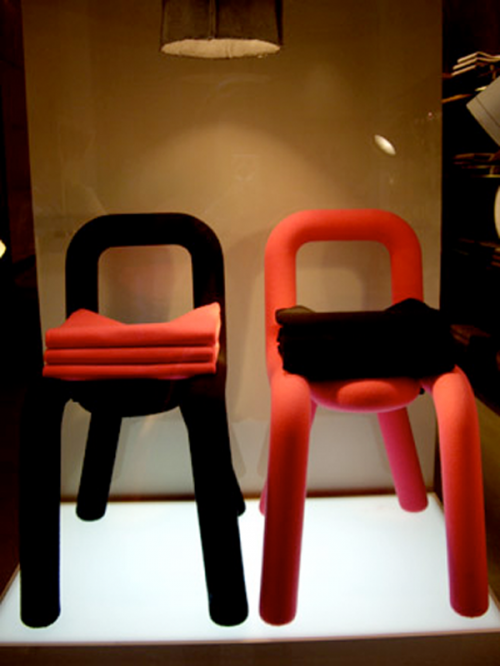 bold chair by big-game for malo. felt-covered.
Let’s start with the premise that design is off to a good start in 2011. The Guardian reports the Milan Furniture Fair, in its 50th year has 2,700 companies exhibiting although attendance might not reach that of record year 2008. An interesting sidenote is this “furniture fair” has inspired the city to host hundreds of related events in showrooms, fashion stores, galleries and vacant warehouses. The fringe events are so numerous now that they take over entire districts.

no evidence this year to date of similar sentiments sketched out in 2010.

Design’s good start in 2011 might have been predicted based on what happened in Miami Basel & Design/Miami in December 2010. Last year for the first time, Design/Miami built a pavilion right across the street from the main draw, the art show, rather than their historic venue in the Miami Design District. And just like Milan, a similar pattern of creative multi-disciplined fringe events popped-up outside of South Beach and spread throughout the Design District and elsewhere. The Art Basel attendance was down but not so for Design/Miami ( in essence, this year a furniture show ) which experienced a best in their ten-year run.

Another thought, The Guardian, if they chose their words carefully, says design plays an important role in urban economies. Here we assume furniture and urban are co-dependent. What about the non-urban economies? Maybe the 2011 International Home & Housewares Show in Chicago in March, which is not urban-centric, gives hints to this question. This year for the first time the show introduces Discover Design, a juried event, with design awards for design-driven home products. This year’s houseware’s show was a very good show.

In its 50th year, Milan design week is model in 21st century. With more than 60 such events in cities across the globe, design is increasingly seen as a crucial facet of urban economies. Milan, can claim to be the original. via the guardian [RK]

Architectural digest will launch in india.