a local architecture firm, nine yard studio serves up a modern cabin concept of three buildings: the main structure, a bunkhouse and wood store. as described by the architect:

the three cabins include a main residence, a half size bunk house for guests and a small shed for storage. the shed showcases an inset feature wall for wood storage that greets you as you approach the site. the main residence is only 600sqft and features a double height open concept living, dining, & kitchen and a loft master suite framed by a large human scale skylight looking out onto the water. this structure opens up entirely to the stunning water views while maintaining privacy to the neighbors with a solid back façade.

the main house interior is clad entirely in white washed spruce boards up to the asymmetrical roof peak giving it a soft and cozy feel. the minimal european wood stove warms up the main space and provides a focal point to the living zone. a black book case acts as a guardrail up the main stairs to the loft and pays homage both to the dark black kitchen and the moody exterior of the building. 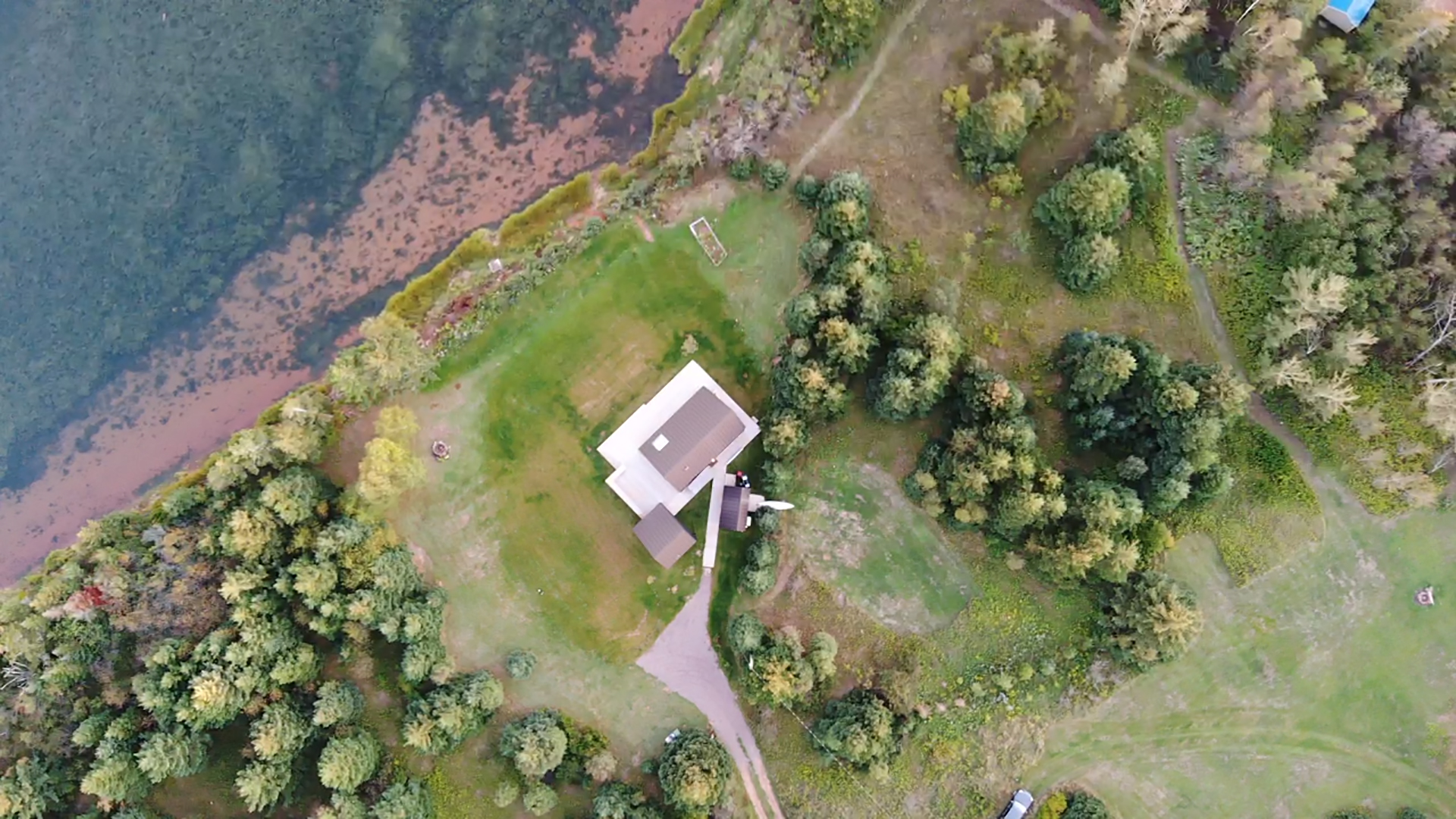 at the end of a long rural dirt road in central prince edward island facing out towards the calm wheatley river sits the river cabins. the cabins take their inspiration from the groupings of traditional gable farm buildings typical of rural pei and exhibit a modern take on a classic lean-to shape so common to this landscape.

the steep slope of the asymmetrical roofs functionally provide space for loft sleeping zones and extend toward the sky with the black peaks blending into the landscape of the evergreen tree tops. the grouping of the cabins was dictated by the small site and angled property boundaries. this grouping provides varying angled views of open and solid facades and allows glimpses of framed landscape views out to the river. the cabins are clad in black standing seam metal siding and black stained vertical pine boards up the gable ends on each side elevation. 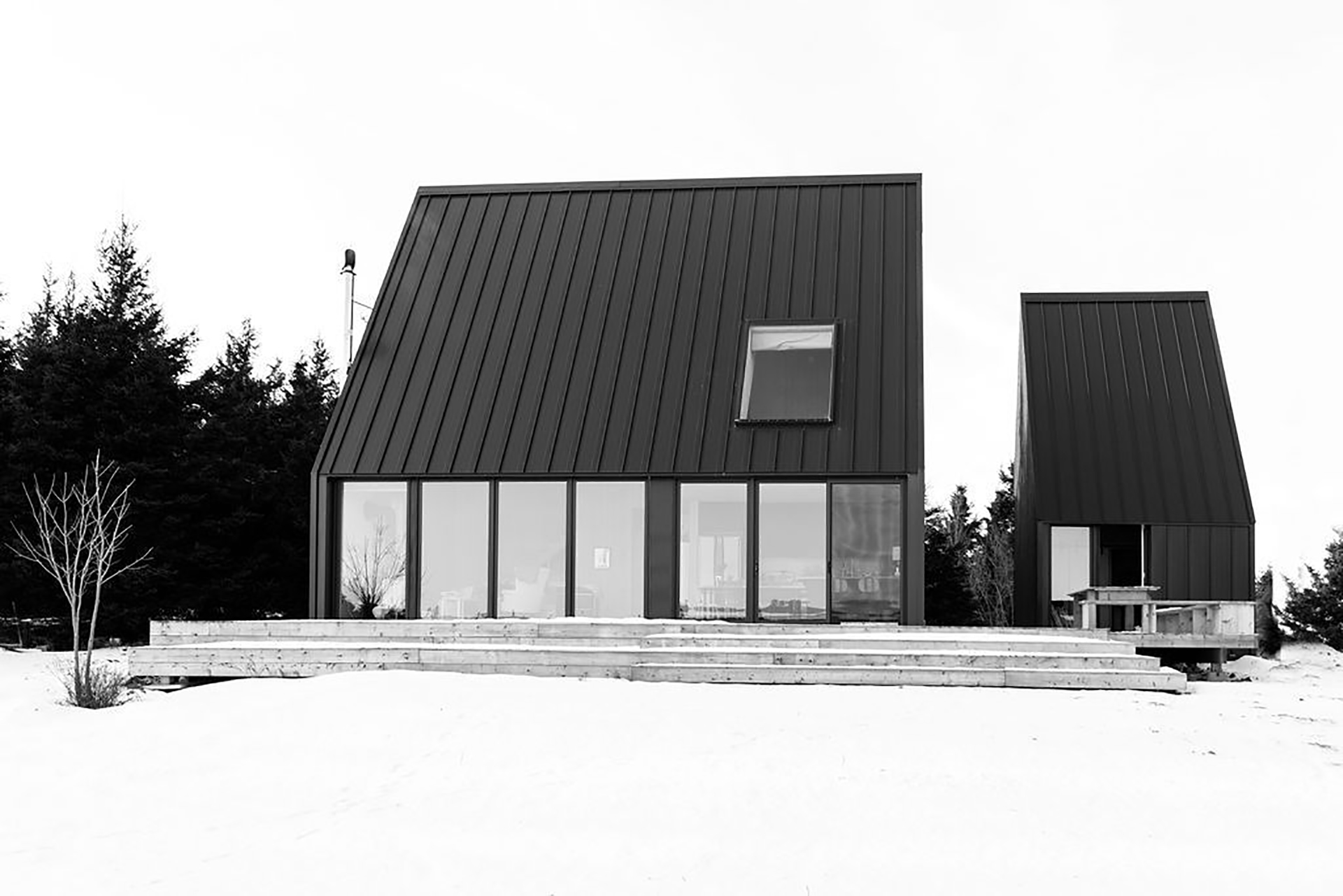 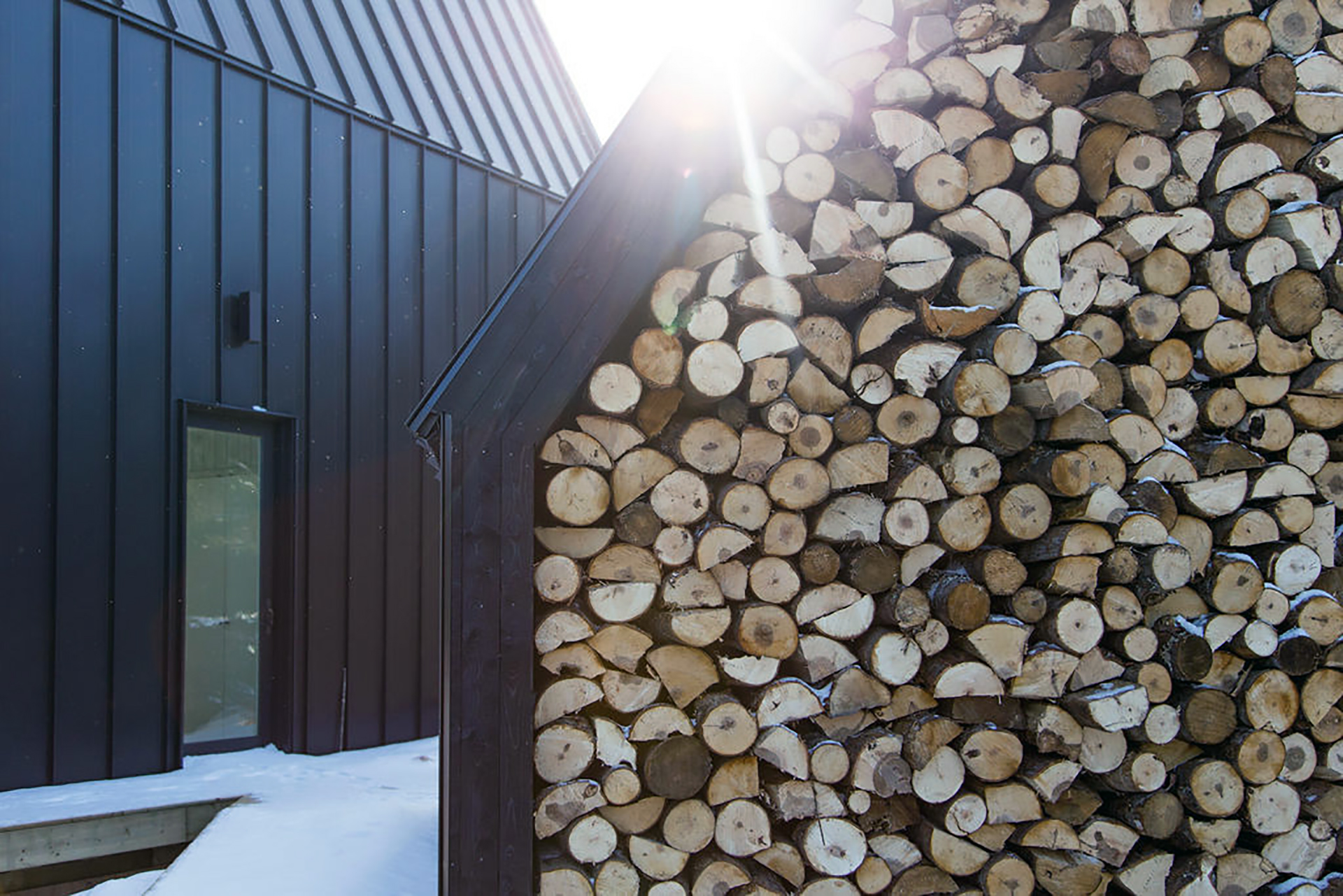 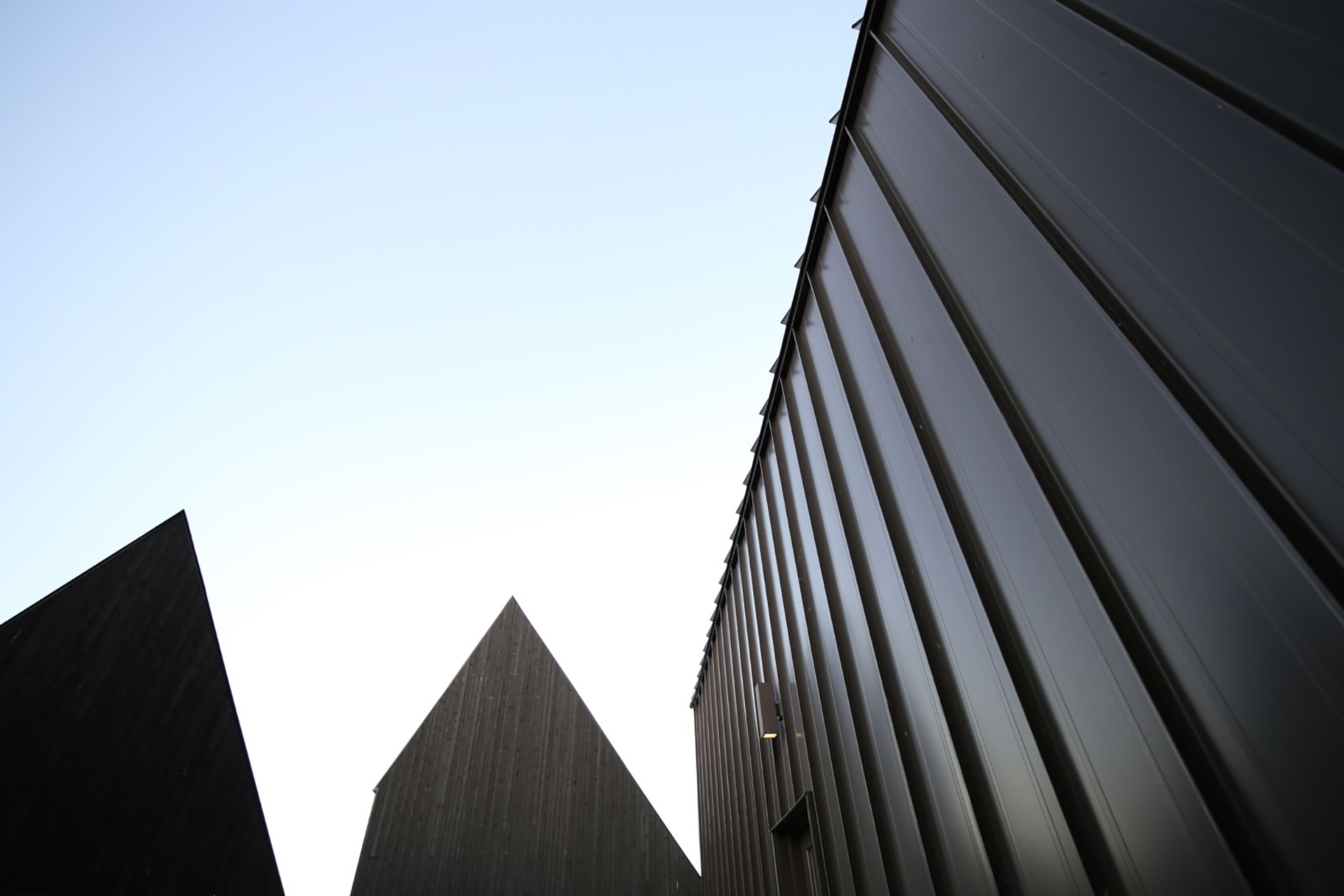 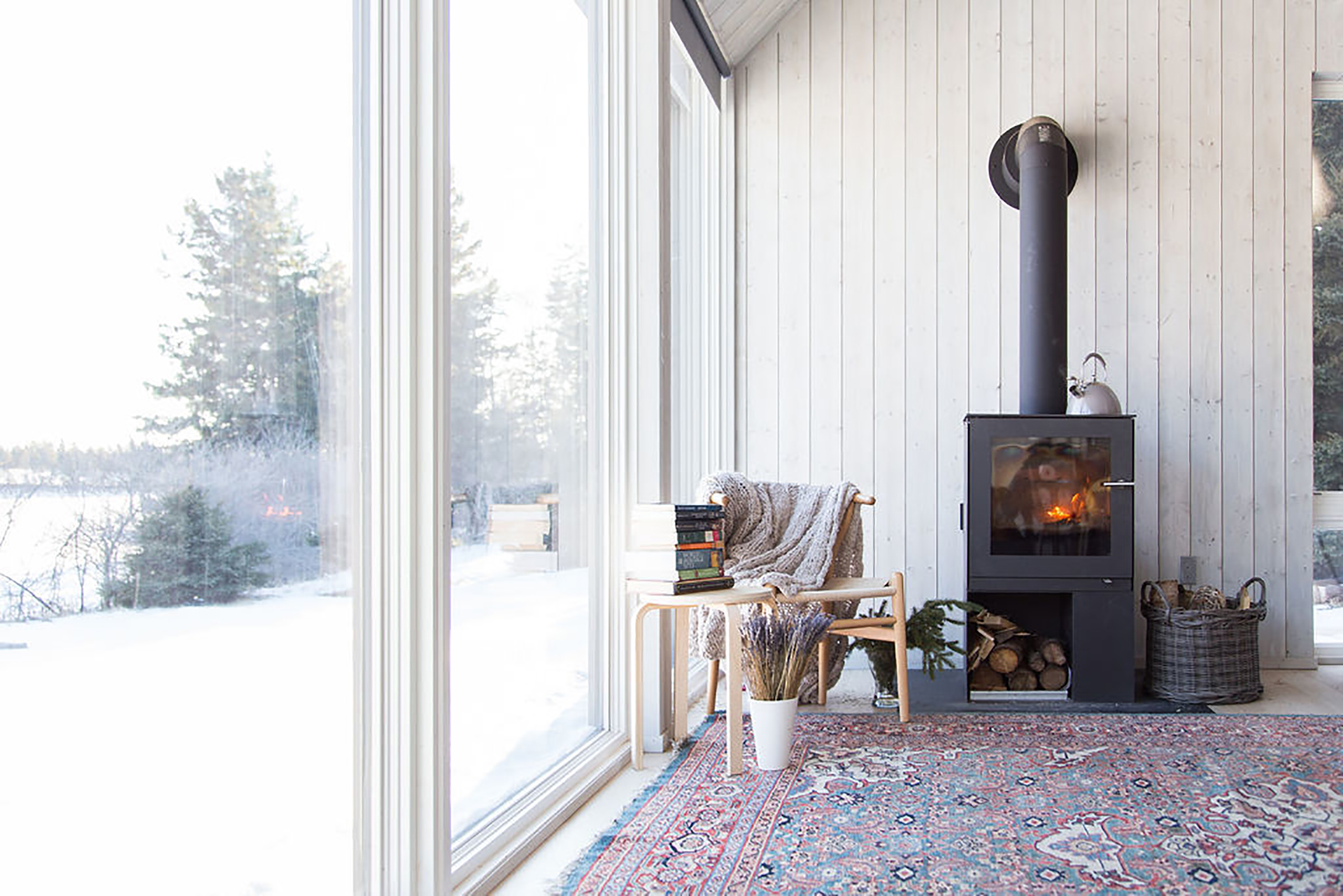 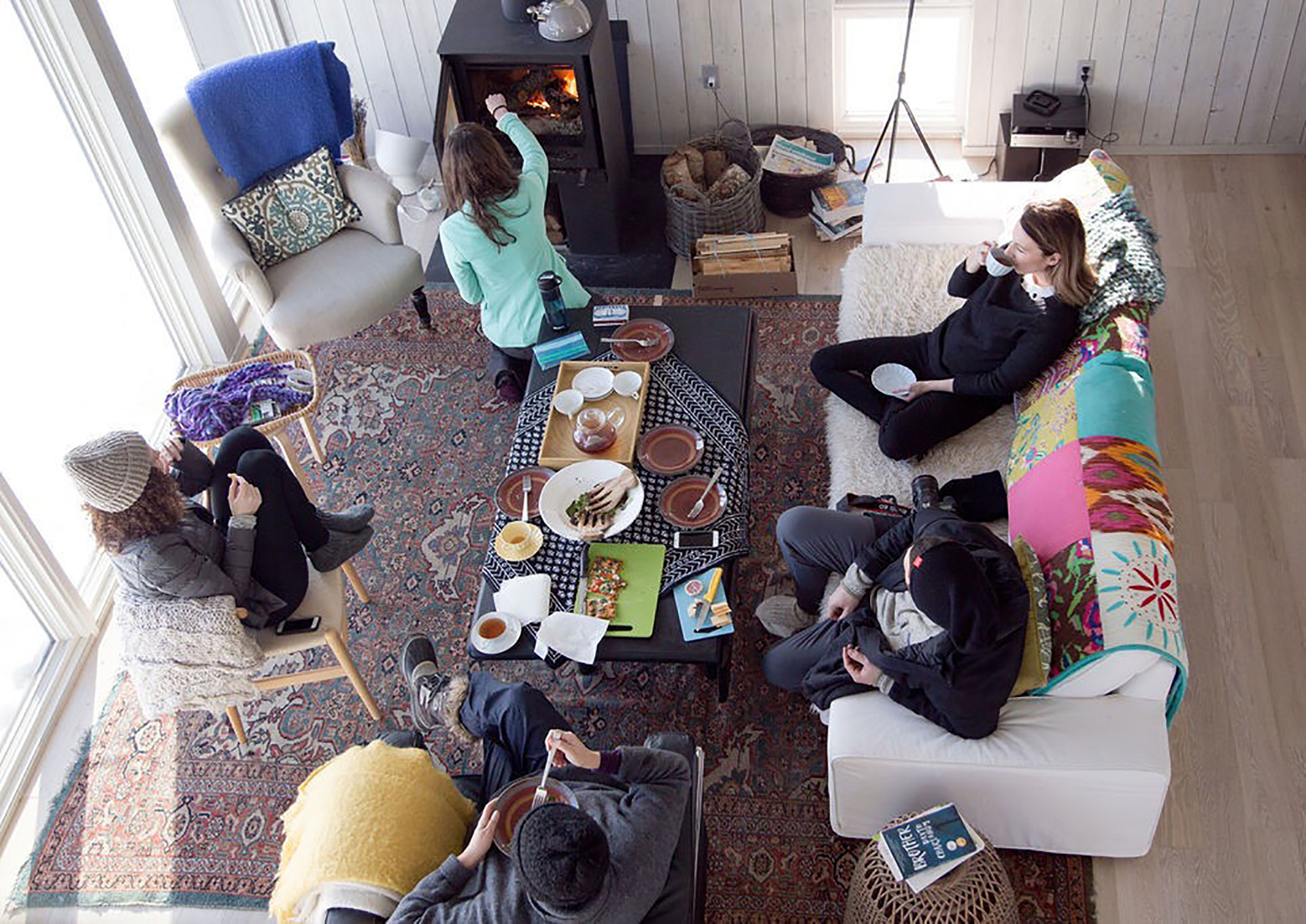 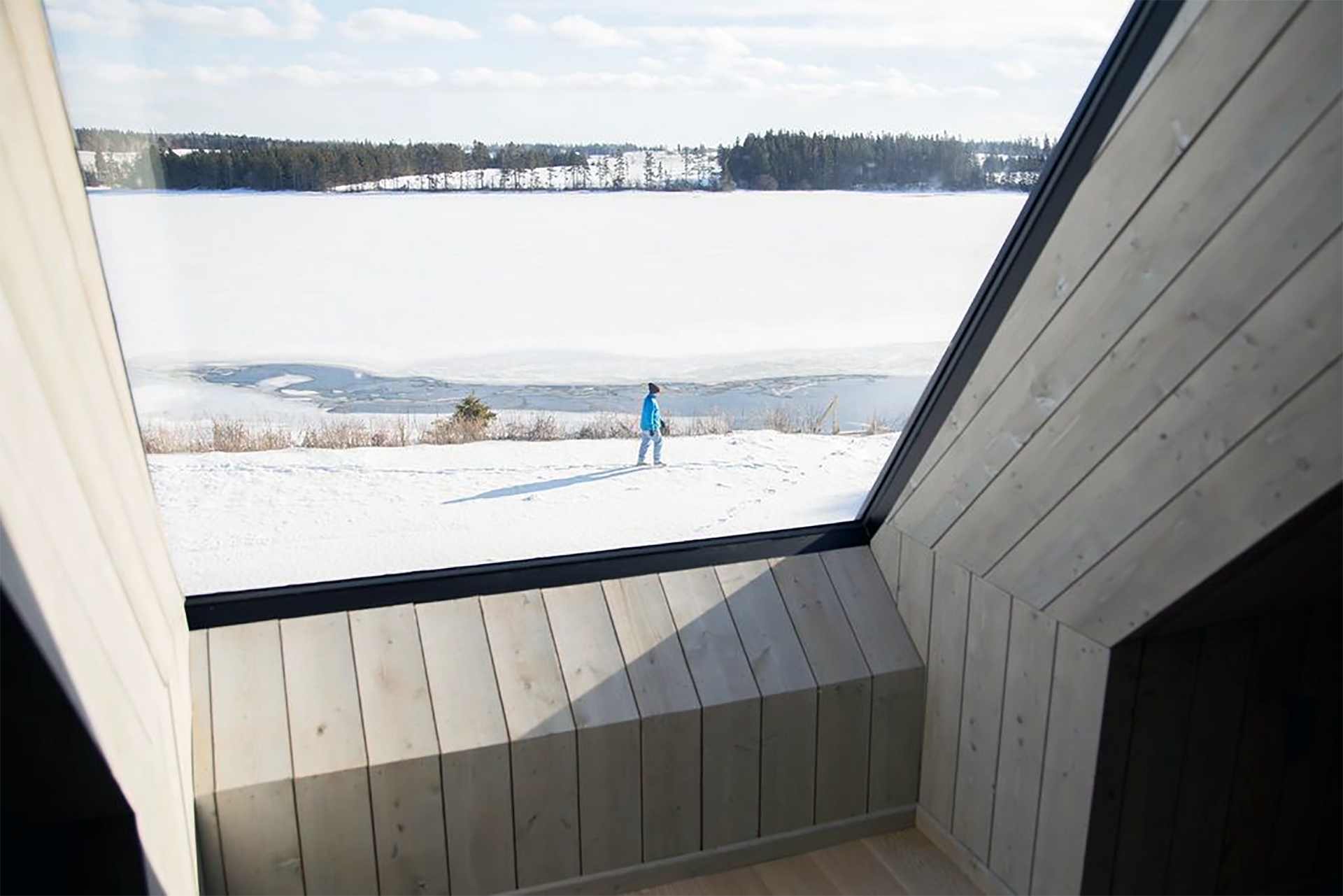 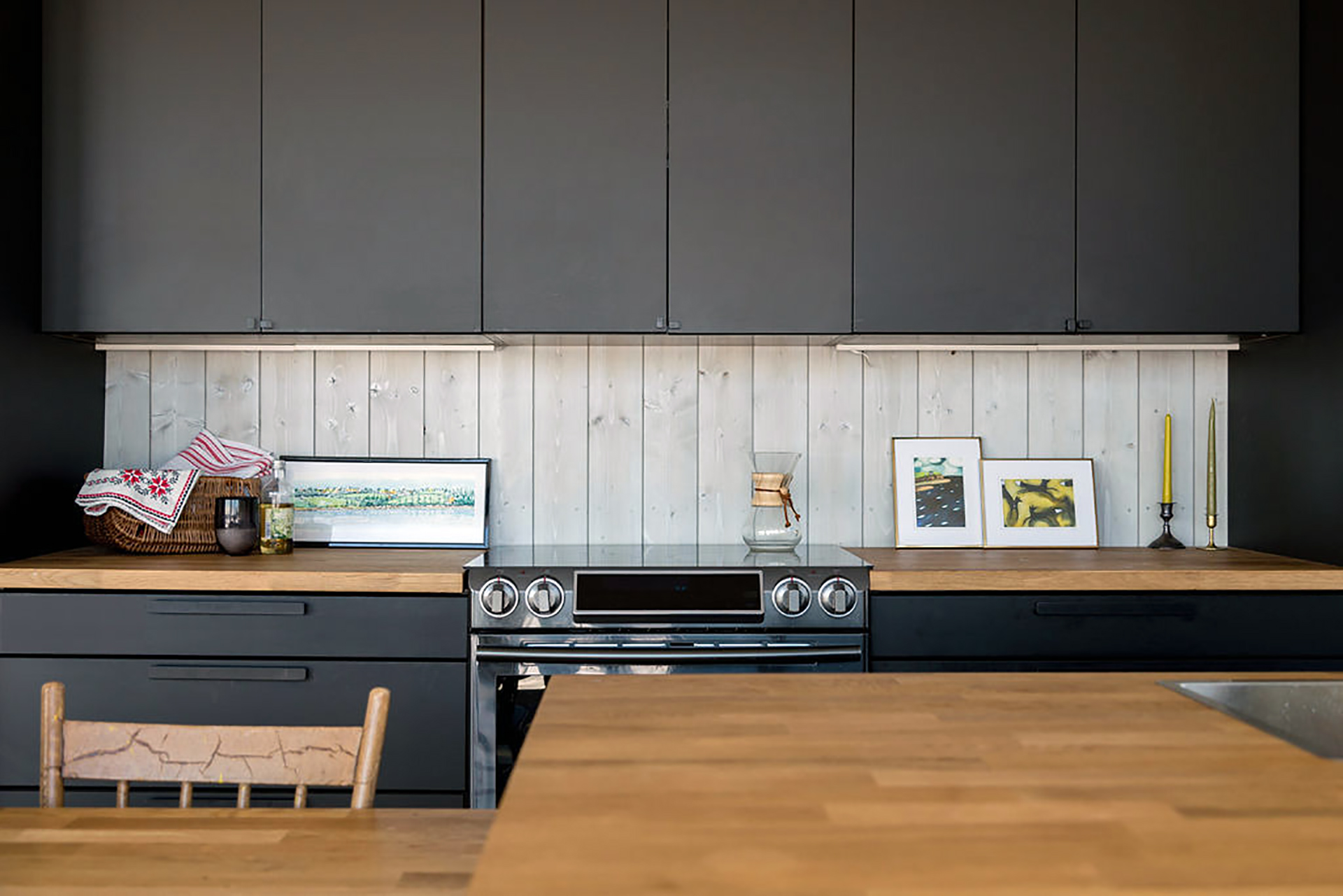 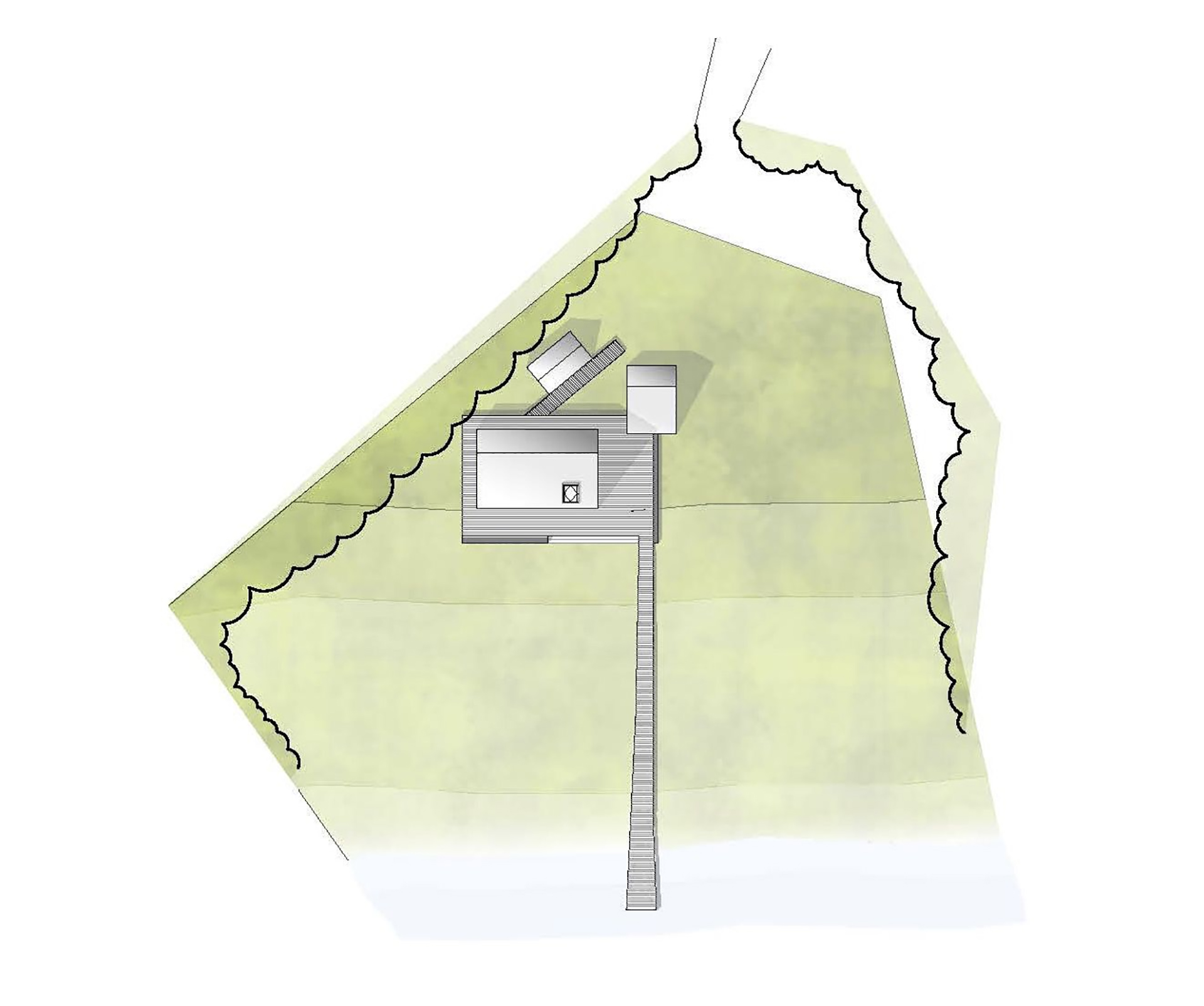 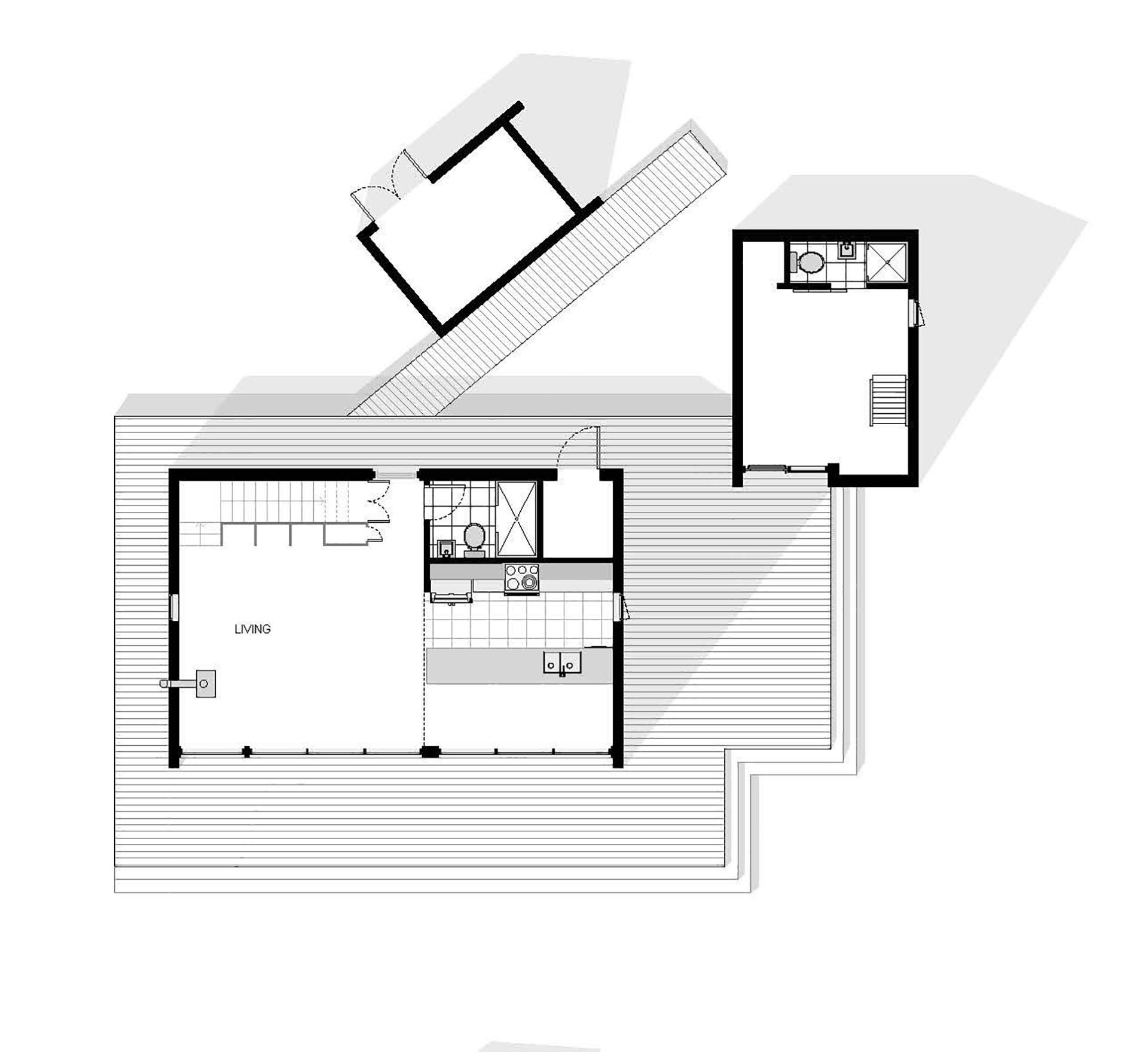 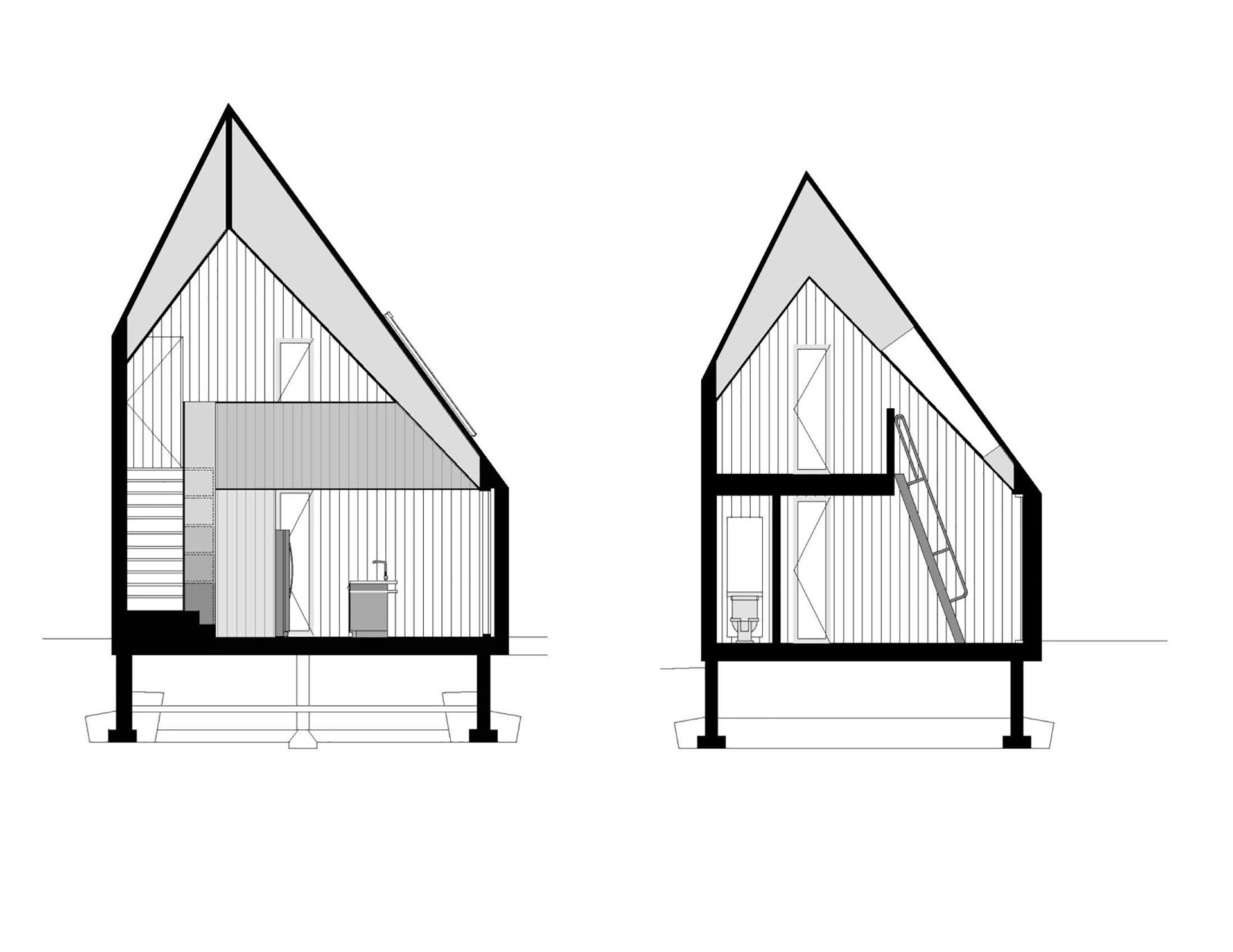 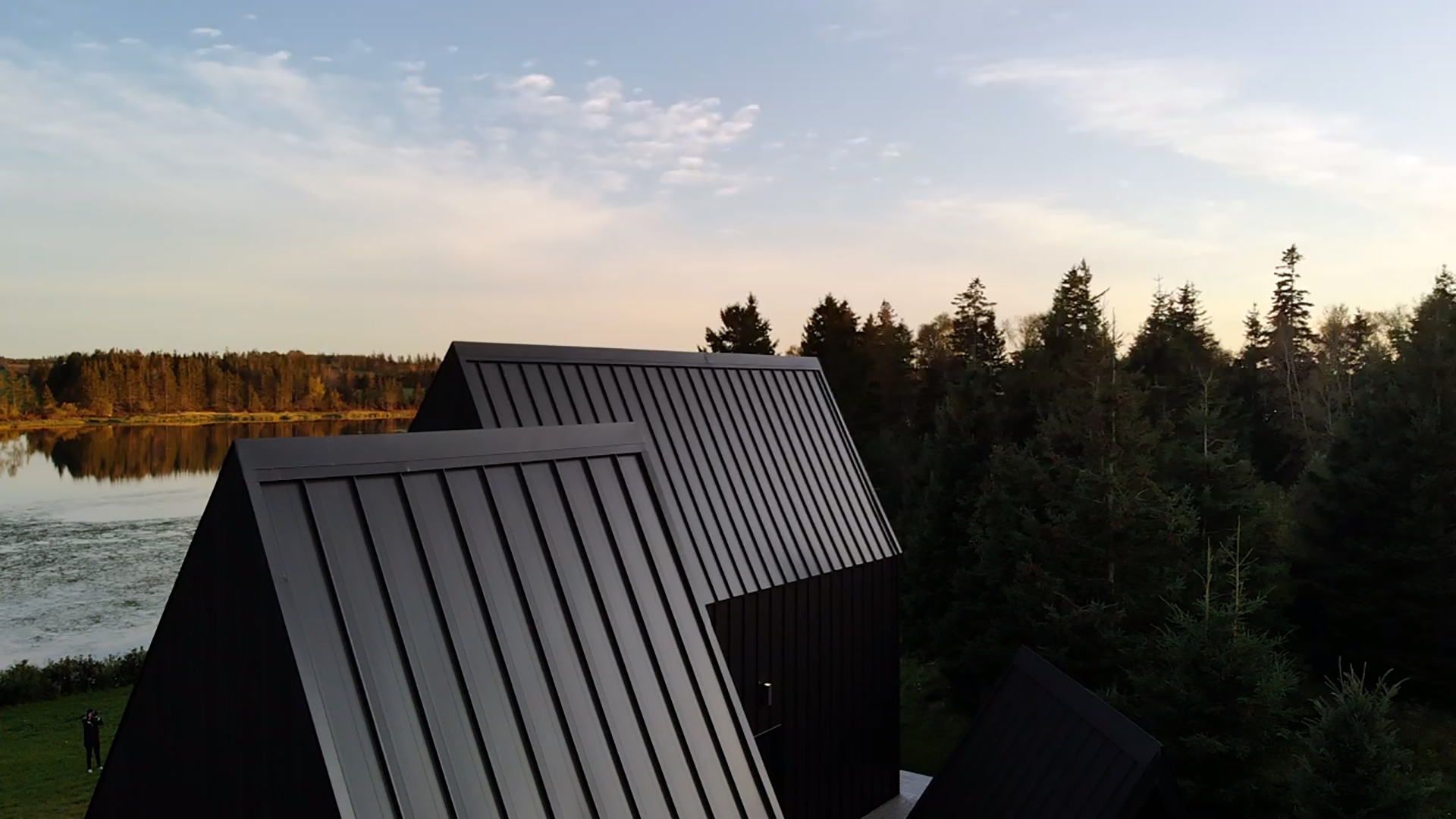 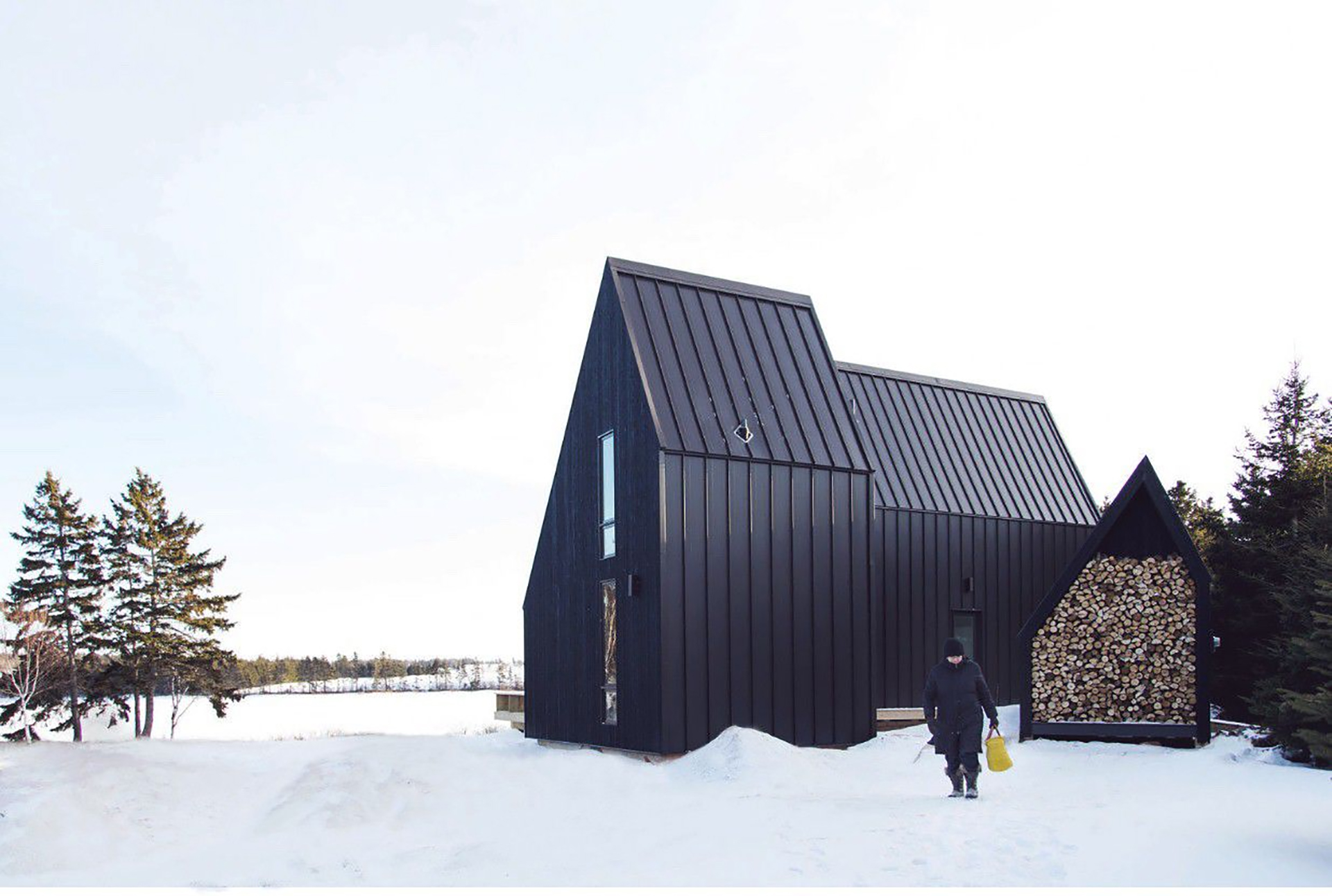 Japanese architect, Shigeru Ban, a 56-year-old architect born in Tokyo, was named the winner of his profession’s top honor. Ban is the seventh Japanese architect to receive the prize since it was established in 1979, following Kenzo Tange in 1987, Fumihiko Maki in 1993, Tadao Ando in 1995, and the third in the past five years with the team of Kazuyo Sejima and Ryue Nishizawa in 2010, and Toyo Ito last year.

His body of work is diverse, brilliant, a mix of both minimal and complex architecture, art and poetry. Seemingly minimal with conventional architectural materials and complex by structural necessity for his use of exposed wood, plastic and paper. Like all master craftsman, despite the diversity there’s a signature presence. Strikingly, amid all his architectural achievements is his passion for humanity. Quite a combination and frankly needed.

“Receiving this prize is a great honor, and with it, I must be careful,” said Ban, who splits his time between offices in Tokyo, Paris and New York. “I must continue to listen to the people I work for, in my private residential commissions and in my disaster relief work. I see this prize as encouragement for me to keep doing what I am doing – not to change what I am doing, but to grow.” 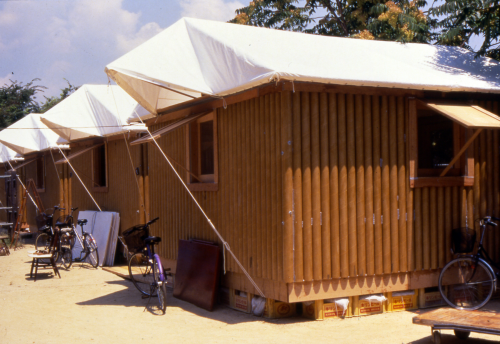 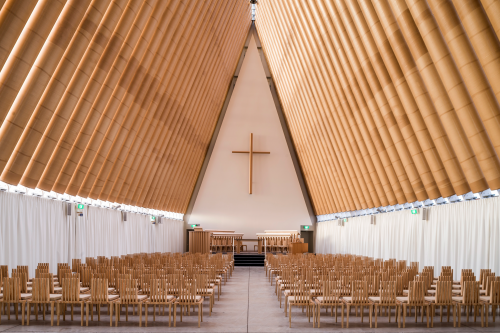 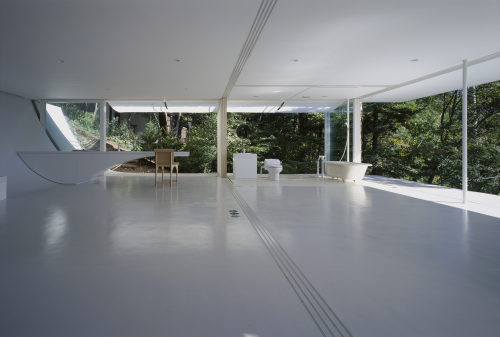 above/below > His early residential commissions feel a bit like he became bored and quickly finished projects without walls, windows. Maybe he was the perfect foil for those clients who wanted something different and he solved their problems within a limited budget. Usually a great degree of space and quite utilitarian. His later homes are still very zen-like with more than a dash of sumptuous. 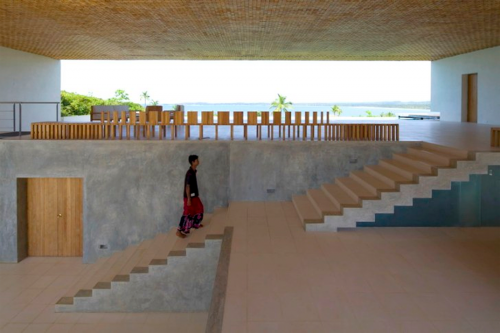 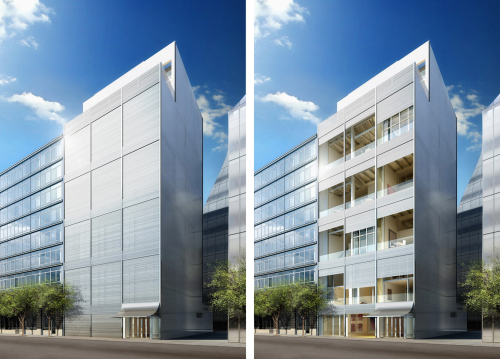 above > Many solutions are changelings, able to morph into one function or another, mostly indoor – outdoor excursions. 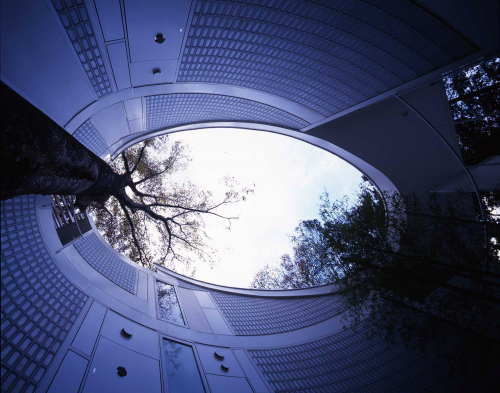 above/below > An architect’s home reveals their sensitivities, built in 1997, resides in a forest and the challenge met was no trees were cut down. 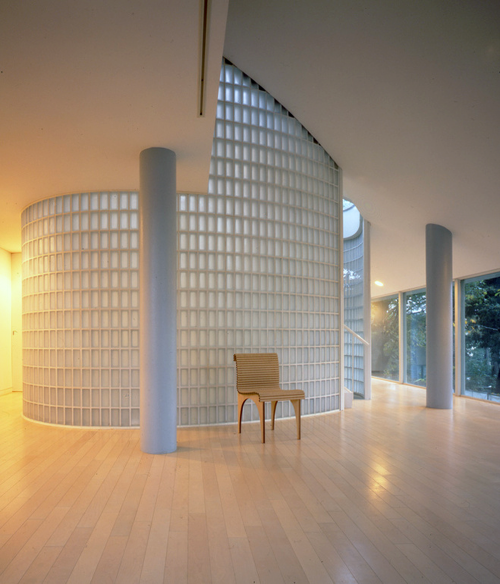 [ jury citation 2014 ]
Since its establishment thirty-five years ago, the goal of the Pritzker Architecture Prize is to recognize living architects for excellence in built work and who make a significant and consistent contribution to humanity.

Shigeru Ban, the 2014 laureate, reflects this spirit of the prize to the fullest. He is an outstanding architect who, for twenty years, has been responding with creativity and high quality design to extreme situations caused by devastating natural disasters. His buildings provide shelter, community centers, and spiritual places for those who have suffered tremendous loss and destruction. When tragedy strikes, he is often there from the beginning, as in Rwanda, Turkey, India, China, Italy, and Haiti, and his home country of Japan, among others.

His creative approach and innovation, especially related to building materials and structures, not merely good intentions, are present in all his works. Through excellent design, in response to pressing challenges, Shigeru Ban has expanded the role of the profession; he has made a place at the table for architects to participate in the dialogue with governments and public agencies, philanthropists, and the affected communities. His sense of responsibility and positive action to create architecture of quality to serve society´s needs, combined with his original approach to these humanitarian challenges, make this year´s winner an exemplary professional.

The recipient has an exceptionally wide-ranging career. Since founding his first office in Tokyo in 1985 and later expanding to New York and Paris, he has undertaken projects that range from minimal dwellings, experimental houses and housing, to museums, exhibition pavilions, conference and concert venues, and office buildings.

An underpinning uniting much of his built work is his experimental approach. He has expanded the architectural field regarding not only the problems and challenges he tackles, but also regarding the tools and techniques to deal with them. He is able to see in standard components and common materials, such as paper tubes, packing materials or shipping containers, opportunities to use them in new ways. He is especially known for his structural innovations and the creative use of unconventional materials like bamboo, fabric, paper, and composites of recycled paper fiber and plastics.

In Naked House, he was able to question the traditional notion of rooms and consequently domestic life, and simultaneously create a translucent, almost magical atmosphere. This was done with modest means: walls externally clad in clear corrugated plastic and sections of white acrylic stretched internally across a timber frame. This sophisticated layered composition of ordinary materials used in a natural and efficient way, provides comfort, efficient environmental performance and simultaneously a sensual quality of light.

His own studio, atop a terrace at the Pompidou Center in Paris for the six years he was working on the museum project for Metz, was built using cardboard tubes and a membrane covering the arched roof. He has also used transportation containers as ready-made elements in museum construction. His body of work is proof of his ability to add value through design. Further new conceptual and structural ideas were developed and can be seen in PC Pile House, House of Double Roof, Furniture House, Wall-less House, and Nine-Square Grid House.

Another theme that runs through his work is the spatial continuity between interior and exterior spaces. In Curtain Wall House, he uses tent-like movable curtains to easily link interior and exterior, yet provide privacy when needed. The fourteen-story Nicolas G. Hayek Center in Tokyo is covered with glass shutters on front and back facades that can be fully opened.

For Shigeru Ban, sustainability is not a concept to add on after the fact; rather, it is intrinsic to architecture. His works strive for appropriate products and systems that are in concert with the environment and the specific context, using renewable and locally produced materials, whenever possible. Just one example is his newly opened Tamedia office building in Zurich, which uses an interlocking timber structural system, completely devoid of joint hardware and glue.

His great knowledge of structure and his appreciation for such masters as Mies van der Rohe and Frei Otto have contributed to the development and clarity of his buildings. His own architecture is direct and honest. However, it is never ordinary, and each new project has an inspired freshness about it. The elegant simplicity and apparent effortlessness of his works are really the result of years of practice and a love for building. Above all, his respect for the people who inhabit his buildings, whether victims of natural disaster or private clients or the public, is always revealed through his thoughtful approach, functional plans, carefully selected appropriate materials, and the richness of spaces he creates.

Shigeru Ban is a tireless architect whose work exudes optimism. Where others may see insurmountable challenges, Ban sees a call to action. Where others might take a tested path, he sees the opportunity to innovate. He is a committed teacher who is not only a role model for younger generation, but also an inspiration.

For all these reasons, Shigeru Ban is the 2014 Pritzker Architecture Prize Laureate.