All you need is water, money, a Darth Vadar fetish. One you burn calories. One you burn 951 gallons an hour. Both burn holes in pockets.

There is little info on the Tu-fin save a link to their site. “TU_FiN Walking on Water—das Fun und Fitnessboot.” But here is a story on Wally… 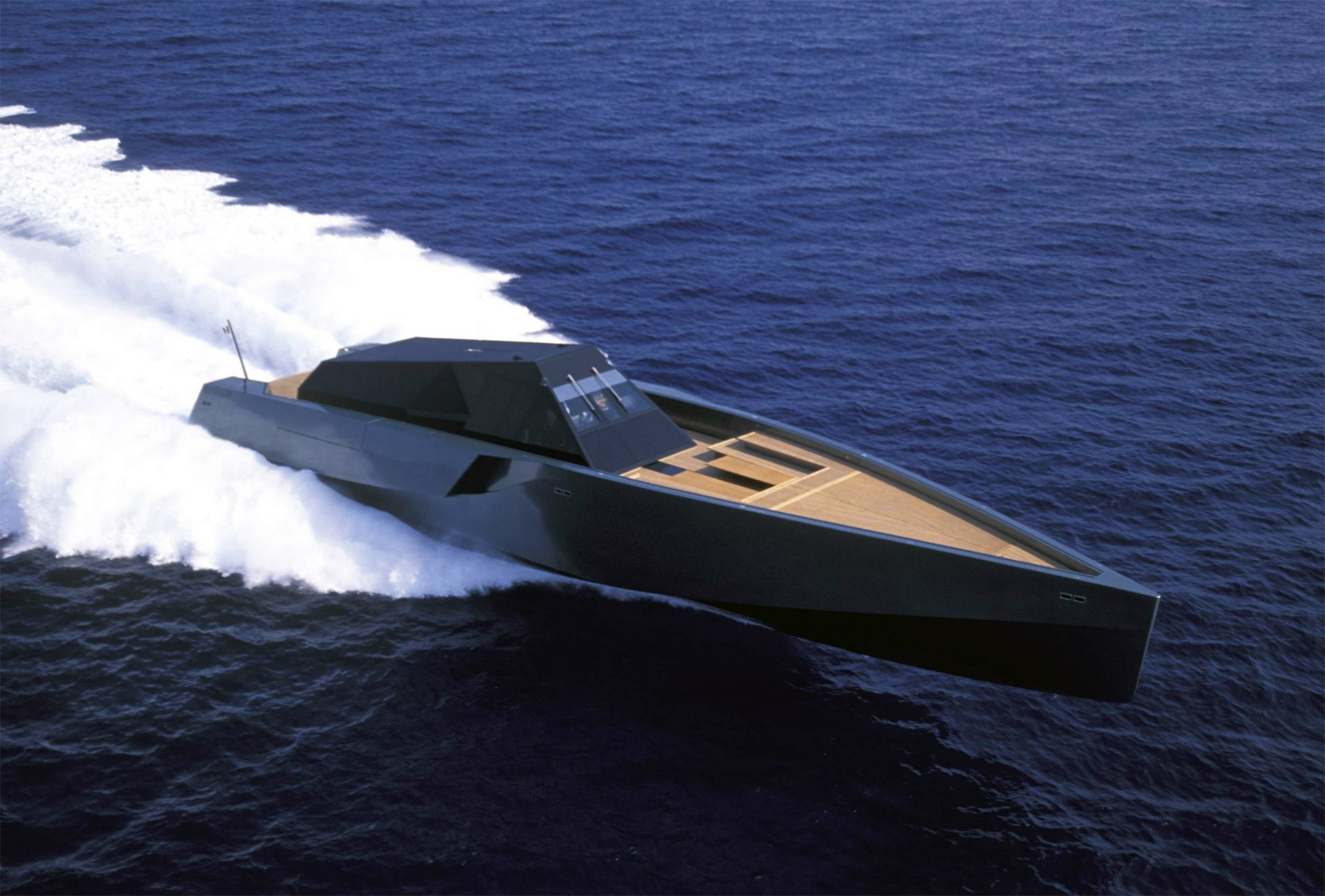 118 WallyPower (above) is a high speed luxury yacht created by Wally Yachts. It is narrow and angular in design with black glass housing. It is 118 feet long and is capable of reaching speeds as fast as 60 knots (70 mph, 110 km/h).[1] It is capable of this feat due to three Vericor TF50 gas turbines generating 16,800 HP. The three gas turbines each drive a Rolls-Royce Kamewa water jet, two steerable outboard and a non-steering booster on centerline. The steerable water jets also have a diesel engine input for a 370 hp Cummins diesel hence these two wing drive trains are Combined Diesel and Gas Turbine (CODOG). The 118 WallyPower won the MYDA, Millennium Yacht Design Award,[2] organised by Seatec (the yachting and shipping technology show of Carrarafiere) for the “Layout of the Third Millennium.” The WallyPower is also being honoured by the San Francisco Museum of Modern Art as the sole boat in its major architecture and design exhibition, ‘Glamour: Fabricating Affluence’, which ran from October 9 2004 to January 16 2005.[3] Wally Yachts has only produced one, and it currently resides in the Mediterranean.[4] The 118 is known by most from its role as the “Renovatio” in the 2005 science-fiction film The Island.

Construction
The sleek lines of the 118 WallyPower are the result of an extensive R&D program that included the tank testing at the SSPA facility in Gothenburg, Sweden, and smoke testing in the Ferrari Wind Tunnel Facility in Maranello, Italy. The air inlets of the gas turbines were optimised to verify any turbulence and back flow of the exhaust gas on deck and living areas, and to have further confirmation of the geometry of the hull and superstructure.

The bottom of the hull is built in solid fibreglass. Topsides, from the waterline up, are hybrid fibreglass/carbon composite with balsa core. On deck this becomes a Nomex/full carbon composite. The deck superstructure is made of a carbon frame to which the glass panels are glued. The glass is composed of Lexan and a triple laminate of glass. The interior bulkheads and cabin soles carry no structural loads so they are constructed entirely of thin wood and laminate veneer skins with cores. At speed, the 118 WallyPower is comfortable and stable as a result of the deep V (22 degrees) hull shape combined with a straight stem bow designed to pierce waves. The bathfixtures and dining tables are even made from carbon composites to reduce weight.

The 118 WallyPower’s chameleon-like paint finish is metallic dark green and changes reflections and colour depending on the light and landscape. The 118’s deck, cockpit, navigation, dining and saloon areas have been conceived as one continuous element. Inside the superstructure, the atmosphere is that of a New York style loft. The open space incorporates three areas, from stern to bow: The saloon, the dining/seating area, and the navigation cockpit. Transparency is a main feature of the yacht’s interior. When dining, guests can enjoy the 360-degree view. Underneath the table, the skylight allows light to filter down to the lower corridor. The lightweight carbon fibre dining table seats eight people, and the port and starboard teak cabinets alongside serve for storage of china, silverware and glassware. The dining and lounging cockpit is forward of the superstructure, to provide maximum privacy as well as being in the coolest area at anchor, away from the engines.

Two fore dining tables can be mechanically lowered to provide a large cushioned relaxing area in the bow of the Wallypower. Inside the yacht the owner’s stateroom is forward, featuring a king size bed. Plenty of storage is provided by the side cabinets. A 20″ plasma screen is mounted in the aft bulkhead. The cabin has plenty of natural light coming from the top skylight. Two identical guest cabins feature queen size beds and en-suites. Each cabin has a 15″ plasma screen in the aft bulkhead.

The spacious galley includes the crew mess, again featuring a 15″ plasma screen. The galley (kitchen) is equipped with a professional oven and stove, as well as plenty of fridges, and is made enitrely of stainless steel, including the ceiling.

via wikipedia and today and tomorrow