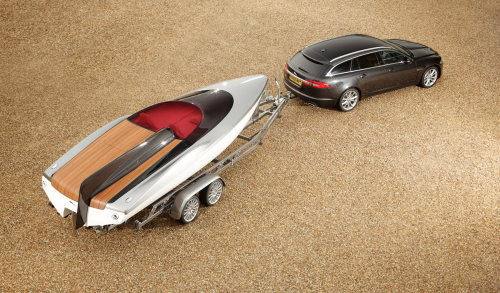 [ Jaguar Cars ] raises the bar for introducing a new car, the XF Sportbrake, by unveiling the Concept Speedboat. 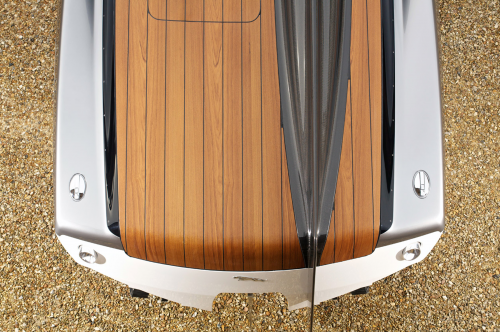 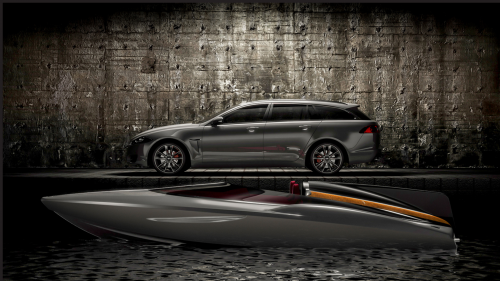 [ official release ]
Jaguar Cars has today unveiled an exciting and unique styling concept at the international driving debut of the new Jaguar XF Sportbrake. ‘The Concept Speedboat by Jaguar Cars’ showcases the design DNA of the British premium luxury and sports car manufacturer in an unexpected and spectacular package.

Jaguar Director of Design, Ian Callum is at the forefront of the Concept Speedboat. Callum explained: “We recognise that both our existing and future customers enjoy diverse and active lifestyles. With the launch of the new Jaguar XF Sportbrake, we had an opportunity to create a vision of how our design philosophy might be applied to an alternative product, in which speed and beauty are also priorities.

“The Concept Speedboat looks powerful. It follows, in so many ways, the idea of a traditional speedboat but with the sleek and fast characteristics that you would expect from a Jaguar Car.”

Jaguar Cars consulted with a yacht design specialist* and a bespoke design project management company** throughout the development of the Concept Speedboat. The Concept Speedboat has a gel coat fibreglass hull finished on top with a natural teak decking. This is split by a carbon fibre fin, inspired by the iconic Jaguar D-Type. The front of the boat flows seamlessly into the screen and the red 2+1 cabin follows the sporting character of Jaguar cars. Jaguar Cars’ heritage is also subtly recognised with fuel filler caps inspired by the Series 1 XJ. A polished aluminium propeller and pop-up mooring post imitates how the boat could be powered and docked respectively.

Ian Callum added: “I hope our design inspires people to think about our products in a much broader sense, especially in lifestyle and enjoyment. I have always had a passion to create such an object and it seemed fitting that we relate this to a lifestyle vehicle such as the Jaguar XF Sportbrake. The two sit together perfectly.”

[ 2012 jaguar sportbrake ]
The new XF Sportbrake is the most versatile derivative of the award winning Jaguar XF to date. It represents a compelling combination of muscular yet elegant design, dynamic ability, contemporary interior luxury and, with a load-space capacity of up to 1675 litres, a no-compromise approach to practicality.

Matching the XF saloon for aerodynamics, torsional stiffness and dynamic handling ability, it is powered exclusively by Jaguar’s range of powerful, refined and efficient diesel engines. The rear wheels are driven via an eight-speed automatic gearbox. The 2.2-litre engine is fitted with Jaguar’s Intelligent Stop-Start system, making it the company’s most efficient powertrain to date, while the 3.0-litre twin-turbo V6 is available in two states of tune, with 275PS in the range-topping Diesel S. The XF Sportbrake goes on sale in UK and throughout Europe in November.

The standard equipment includes a lot of practical touches like remote fold levers mounted within the boot to lower the rear seats, powerful LEDs and splitting boot floor into three sections. Beneath the car there are extensive changes to the rear suspension. Self-levelling air suspension aids driving dynamics and means the Sportbrake can serve as an accomplished tow vehicle. The 2012 XF Sportbrake is powered by the award-winning 2.2 litre four-cylinder diesel and a 3.0 litre six-cylinder diesel. Both send their power to the rear wheels via an advanced 8-speed automatic gearbox.

The ‘Concept Speedboat by Jaguar Cars’ is a design project that was commissioned to support the launch of the XF Sportbrake. The company has no plans to build or commercialise a boat of any kind. 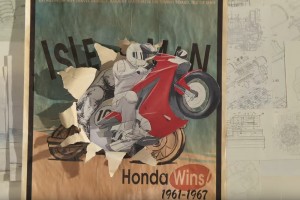 Aptera’s first product, a three-wheeled two-seater named the Aptera 2 Series, is currently under development, though they are accepting pre-orders from California residents. The fuel efficiency makes it one of the most fuel-efficient cars in the world. The name Aptera is Greek for “wingless,” a nod to their light-aircraft-inspired design and construction techniques.