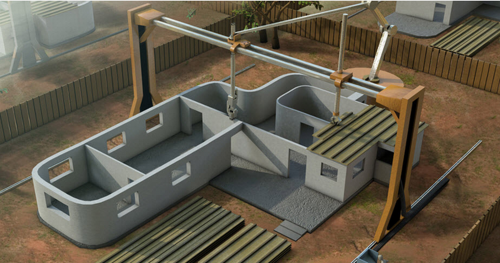 Architects and designers are very excited about the potential of 3D printing and expecting big things when the right people master it. Most everyone thinks of creating products and not bigger objects that would fall into the realm of architecture. A story making the media rounds right now is in fact ten years old. At the University of Southern California, Behrokh Khoshnevis, a professor of Industrial & Systems Engineering, has been developing a process called [ Contour Crafting ] a robotic extruding system that could efficiently print habitats. Below is a video taken at a TED talk in Ojai, California in 2012.

College students show off their robots.

college students show off their robots. hold your bets when blackjack dealer is a robot. via wdtimes [RK]

Paralyzed woman moves robotic arm with her thoughts. the first demonstration of reaching and grasping by a brain-controlled prosthetic arm. via washington post [RK]

Graffiti bots programmed to get arrested. 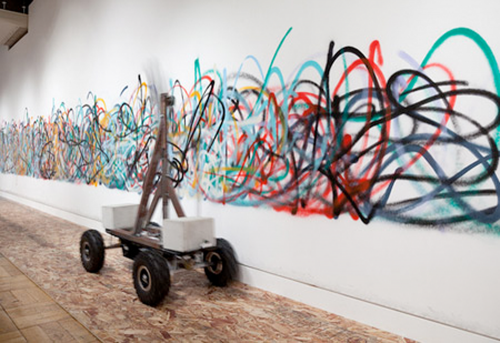 two bots provide excellent example of duality: getting arrested or providing a public service. yesterday, chicago’s new mayor rahm emanuel’s budget austerity proposal passes 50-0. 500-plus municipal jobs slashed but not the graffiti crew. not many would agree but tasteful art and graffiti can improve urban eyesores that suffer from neglect. the above bot is labeled “the senseless drawing bot” in the blogosphere. can the senseless drawing bot provide a public service? i think he has the talent to do beautiful work.

below: now on the other hand this bot does not have the talent nor provides the spontaneous creative moment for the 99% graffiti artist. 1% will try it. 100% gets arrested. 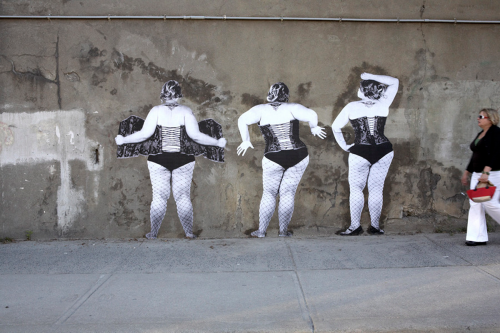 above: do you think street art ( graffiti ) can be an effective agent of change?

PR2 robot learns how to get a subway sandwich. 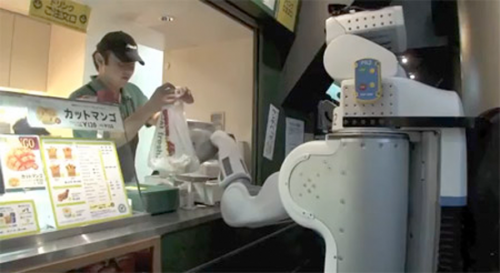 The University of Tokyo and Technische Universität München, uses semantic search to task a PR2 robot with fetching a sandwich. The PR2 has no detailed information on sandwiches, but its database tells it that sandwiches are a type of food, and that food can be found in kitchens and restaurants, its database also has maps and locations, and from that, it figures out where to look. The robot has to figure out how to find and use an elevator to a lower level where a Subway is located.

“Semantic search” is the process of deriving logical conclusions from premises known or assumed to be true. In this example it’s a computerized version of what we humans think of as “common sense.” For example, if someone asks you to bring them a glass without telling you exactly where the glass is, you’re probably smart enough to infer that a glass can be found in cabinets or dishwashers, and cabinets and dishwashers are typically located in a kitchen, so you can go to the kitchen, poke around a bit, and find a glass.