The ‘Quaranta’ project is a concept car designed to celebrate Italdesign Giugiaro’s forty years of business in styling and technological research at the service of the automotive sector. The Quaranta, world-premiered at the 2008 Geneva International Motor Show, is a synthesis of Italdesign Giugiaro’s unmatched experience of automotive design: from city cars to super sports-cars, from MPVs to medium-engined saloons up to and including luxury flagships and environment-friendly SUV, not to mention light/heavy duty commercial vehicles, in complete cooperation with leading manufacturers all over the world.

The Quaranta is an ‘extreme’ product, an environment-friendly, 4WD super sports-car which incorporates a series of innovative aspects: its styling, but also its drive technology, which combines a hybrid engine with solar energy, and its internal layout which, despite its mid-mounted rear engine, can accommodate three adults and a child, also providing a generous luggage compartment.

The idea which inspired the Quaranta project is that of the first single-volume concept car with central engine and drive. The original reference is to the 1968 Bizzarrini Manta which, at that time, represented a major breakthrough in styling, now adapted to state-of-the-art technology and enriched with Italdesign Giugiaro’s forty years experience of research.

The style of the future
Despite its flat, highly compact shape, the Quaranta features a single-volume shape characterized by a continuous body line stretching from its clipped nose to the tail that exploits the almost horizontal rake of the windscreen.

Access to the cabin is ‘step-in’ via an upper door incorporating the side ones. At the touch of an electric on/off button, the door opens upward in a downwind direction, regulated by proximity sensors. The door is hinged to the hood pillar and is aligned with a second upper rear door, for access to the engine compartment and boot.

The roof houses the array of solar panels, necessary to power the electric battery, in the space between the two doors. Along with the other solar panels positioned on the front end, these create a central opaque strip, a distinctive signature of the model, thanks to the interplay of light with the bright paint of the bodywork. The solar panels can generate a power of up to 250 W, sufficient for the functioning of the cockpit conditioning system and for recharging the electric battery.

The styling of the Quaranta prototype is further enhanced by the attention dedicated to surface aerodynamics, designed to ensure maximum possible efficiency and penetration, also by using sharp edges on the rear. This can also be noted in the front end of the vehicle where the radiator grille has been eliminated and replaced by two side air inlets, positioned above the lighting clusters, which perform the delicate function of front stabilizers. The rear of the vehicle has also been conceived to improve overall aerodynamic performance: an attentively-molded spoiler, with a perfectly square-edged cut and a very technical design, has the scope of supporting the lower wing, modeled according to latest generation F1 styling, that makes up for the absence of the traditional upper stabilizer.

Styling research aimed at top aerodynamic performance is also reflected on the sides, characterized by extremely generous glazing stretching from the front fender to the tail and in which the air vents are housed, located after the doors but also along the sill, in which the water cooling ducts are inserted. The most innovative feature of the side profile is certainly the contour line, between the door-windows and the sill, which is ‘negative’ in the shoulder section, a particular, absolutely innovative feature for super sports-cars.

Interiors: technology for safety and comfort
Inside, the most striking innovation can be found in the multi-control steering wheel which reflects an idea already incorporated in the 1980 Medusa, a prototype developed by Italdesign and on display at its stand in Geneva: all vehicle driving and control functions are concentrated on the spokes, where the stalks have been eliminated and replaced with keys. This guarantees easier control by the driver, in a central position which can be obtained due to the absence of the gearbox-transmission block tunnel. This is possible thanks to the electric four-wheel drive system which eliminates any obstacles on the floor pan, making it completely flat. The generously-scaled central space of the cockpit can accommodate two adults and a child, behind the driver. The dashboard has been conceived with a sporting, modern look, with clean-cut details matching the style of the exterior, and equipped with a vast array of instruments. These are organized on two levels: the screens of the side and rear TV cameras are positioned on the upper level, with particular attention to the left-hand view mirror, useful when overtaking; the lower level is dedicated to the management of the vehicle. The drive-panel also includes a visor for X-ray sensors for night driving. The dark-colored leather and alcantara upholstery reflects the most refined Italian taste.

The lighting clusters are extremely modern: the low-beam lights are based on led technology, while the full-beam are of the Bi-xenon type. The direction indicators, the tail and rear stop lights are of the full led type, inserted in a single box but differentiated according to color, assembled and adapted by hand at Italdesign Giugiaro.

Last but not least, the Quaranta features 9 ½ by 20′ alloy wheels, without hub caps for improved styling and aerodynamics, and four Vredestein tires as standard, which differ only in shoulder height: 275/35/R20 front and 275/40/R20 rear. The dimensions are certainly tight for a super sports-car but suitable for a 4WD car.

Mold-breaking mechanicals
The structure of the prototype is made up of the carbon monocoque frame onto which aluminum and special steel parts are assembled, while the windscreen and roof are made of stratified glass with UVA filter. The Quaranta is fit with electronic four-wheel drive, divided in a small electric motor on the fore-carriage and the thermal engine/electric engine system located in a central rear position. This particular structure, which has seen Toyota’s involvement in the electronic control management, has made it possible to develop the vehicle on a 2620-mm wheelbase, ideal for a mid-engined car.

The batteries which assist the electric motors are located between the engine compartment and the cockpit and are powered directly by the solar panels. The Quaranta features a double fuel-tank, integrated in the supporting frame, with a total capacity of 60 liters, giving a mileage of up to 1000 km. Posted on conceptcarz.com.

Dynamic asset is variable in two ride height positions: sporting and raised. Maximum ground clearance is 230 mm, an absolute record which means that the super sports-car can take any type of terrain in its stride. The main technical aspect that distinguishes the mechanical design of the Quaranta is the weight balance and in particular the ‘weight centering’: all the mechanical weight of the vehicle is contained between the two axles, including the mufflers which are positioned in front of the rear wheels. Only the radiator and a large overhanging luggage compartment, able to accommodate two golf-bags, remain outside.

The front suspensions also represent a breakthrough: designed according to F1 cars, they are equipped with a central mono-shock echoing an idea already presented by Italdesign – Giugiaro on the 2004 Toyota Volta and on the 1997 Alfa Romeo Scighera. The linkage mechanism of the levers guarantees exceptional stability in any type of situation, simulating a ‘multilink’ mechanism. The links have been designed and engineered entirely by ITALDESIGN GIUGUIARO: the ‘ovalized’ down tubes are made of special steel and the uprights of Ergal.

The entire Quaranta project is an idea of Italdesign Giugiaro, constructed in accordance with the classical formula of the package of services furnished to automotive manufacturers.

The chassis, bodywork and layout of the Quaranta prototype have been designed by the Engineering Division of Italdesign Giugiaro, while the mechanicals and electronics have been developed in cooperation with Toyota. The vehicle was entirely built at the Moncalieri facilities.

– Construction of a prototype involves various completely independent phases that can also be carried out with a modular approach. Starting from hand-made drawings, the next step is Styling Research and definitive development of the master models, using state-of-the-art CAD technologies. In parallel, the phases of technical design of the prototype

interior, or even of only some parts, can be integrated with style development, producing a unique technical result. This is the most complete, professional process that Italdesign can offer its clients. Following consolidation of the styling-engineering project, a full-scale mockup is built. The mock-up gives the possibility of physically evaluating modifications and integrations and represents the basis for the subsequent construction of the final prototype. Italdesign can also carry out various technical tests, including the model crash-test;

• The prototyping phase, a mainly hand-crafted process with the aid of forefront automated systems, includes preparation of the assembly jigs (so-called negatives), usually constructed by hand in the workshop, and hitting models milled according to the style master models, useful for beating the sheets of aluminum or stratified carbon;

• Work on the interior is necessary in order to prepare the seats, facial, door panels and all the other elements inserted in the cabin of the vehicle. Lined fiberglass-reinforced parts are always constructed at Italdesign, and also the upholstery, available in any type of material or shape required;

• The above phases are followed by construction of the mechanical and structural parts of the prototype, preparation of the tooling and uprights necessary for the construction phase and beating of the parts, assembly of the structure, of the interior and accessories and lastly painting. In the case of the Quaranta prototype, the door was designed and constructed entirely at Italdesign using a temporary piston tubular structure, subsequently reproduced and fastened to the chassis.

For the Quaranta, Toyota furnished Italdesign Giugiaro with a derivative of the latest available hybrid system, Toyota Hybrid Synergy Drive technology. The innovative aspect of this engine lies in the ability of the electronic control system to regulate the power distributed by the electric motors to the wheels, making the clutch-gearbox-transmission block superfluous.

The Toyota Hybrid Synergy Drive system guarantees power, acceleration and top performance still keeping high mileage, reduced emissions and extremely silent operation. The compact battery makes it possible to store the energy produced in the braking or deceleration phase instead of dispersing this as heat.

The electric motor is complementary to the thermal engine but can also operate independently, activated by the electronic traction control unit where ideal conditions exist.

The Toyota Hybrid Synergy Drive system consists of a V6 3.3 liter gasoline engine and of two electric motors that operate in synergy, delivering a high power output, comparable to that of an 8-cylinder engine, but with fuel
consumption and emissions lower than those of a 4 cylinder engine. To improve efficiency and handling, the intelligent E-Four system automatically activates two- or four-wheel drive, taking advantage of the increased handling and stability of four-wheel drive in acceleration, cornering or braking, and the reduced consumption and acoustic comfort of rear wheel drive at normal cruising speed.

The real innovation of the Quaranta prototype is reflected in the mid-ship positioning of a hybrid engine on a super sports-car that guarantees high performance with reduced consumption and low emissions.

Bruce Nessbaum's take on why TED may be better than[...] 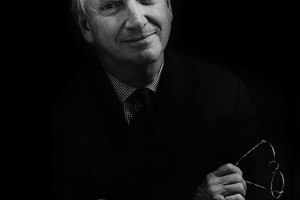 he’s best known for his postmodernist-style, a label he was not happy with.