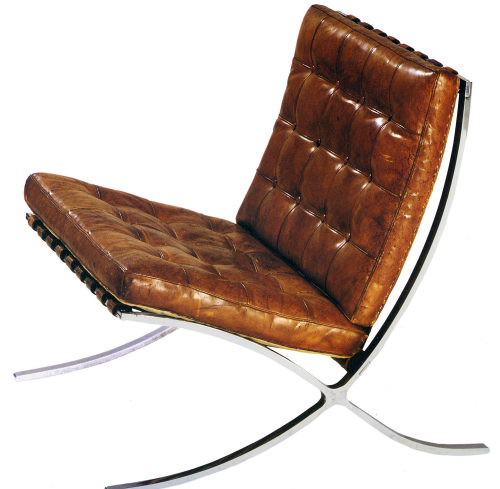 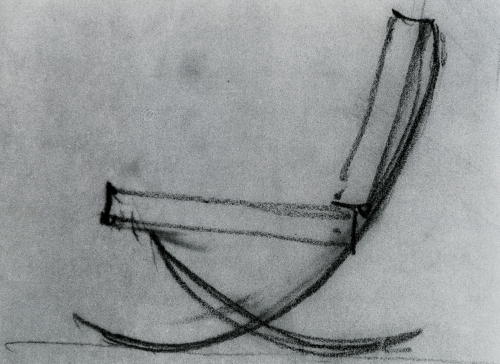 one of many mies seating studies.

Mies first drew his scissor-structure chair in 1928 on a scrap of paper, while exploring numerous variations of seating designs. Classical forms never seem too far in the distance as these sketches are made. It is just this affinity for the timeless, the preference for the permanent that Mies seemed to have in every fiber of his being, in order to create a chair that we all instantly recognize and know in the Barcelona chair.

The scissor principle in design dates back at least to the New Kingdom of Egypt, in 16th century BC , where one finds early archetypes of furniture design that pollinated and influenced chair forms across the Mediterranean. The cross-legged chair is refined and variations are created by the Greeks and Romans. Here, numerous designs can be accounted for on pottery and relief sculpture. In these early scissor-shaped seats, known as Curule chairs, the axis of the frame was generally found in the front to rear elevations of the chair in a symmetrical composition with versions appearing in the middle ages and throughout the Renaissance. In these cases, the chair is more like a stool, as it lacks a backrest. Finally in the 19th century, Thonet produced an economical folding deck chair that predicts later forms by Mies. The most direct precedent for the Barcelona chair, however is not a folding chair, but rather a cast iron garden chair by Karl Frederich Schinkel in 1825, whose work had a tremendous influence on Mies. 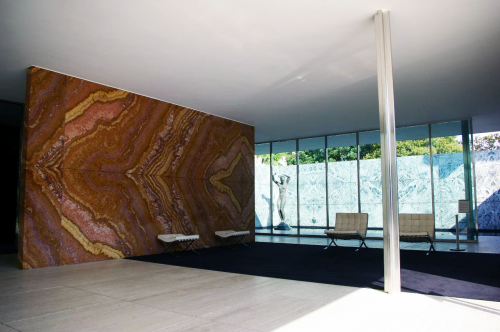 Inside the Barcelona Pavilion, furniture was to be fixed in place, as part of a spatial concept. This theory was repeated in the Tugendhat House in Brno, Czechoslovakia in 1928, whose interior furnishings were never to me moved or rearranged on a whim. It is noteworthy that this is in complete contrast to Crown Hall which represents an open plan that is free of any encumbrances or constraints, and furniture could be placed as the function or need dictates. The solution to this otherwise contradictory pursuit became the scissor shape which has an inherent structural integrity with an air of transparency.

Using thin flat-bar steel, this advancement of the scissor principle in chair design produced a highly cantilevered seat that only became possible with materials produced in the Modern period.

One popular misconception of the Barcelona chair was initiated by Mies himself. In the early 1960s, some 30 years after the design was made, Mies suggested that he created the chair knowing the King Alfonso XIII would be visiting the pavilion and so he designed a chair that would be fit for a king. This has been discredited somewhat, given that the initial thrust of the Barcelona Pavilion was to express the new spirit of the Weimar Republic, one of democracy, progressive culture, prosperity and pacificism, not an elitist, monarchic approach to design. Furthermore, Mies was a member of the socialist November Group, and designed a revolutionary, anti-monarchist monument three years prior. This structure had incredible detailing and complexity of brickwork that Mies never repeated again

In the end, Mies sought a chair that expressed pure construction and materiality, a chair that was free of ornamentation, but was symbolic of the new era of progress in the twentieth century. Reduced to the simple intersection of a stationary curve and an elongated S, the Barcelona chair appears to us now as if it existed forever. 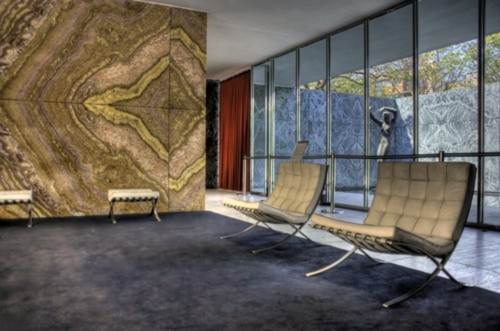 Only two examples of the Barcelona chair were originally made for display at the Barcelona Pavilion. Their bolted and chrome-plated construction supported ivory colored pigskin cushions. Quickly thereafter, the chair took on cult status because of the increasing fame of the designer and the publication of photographs of this seminal building. Mies was an influential architect who was revered and copied, and his chair became famous. Mies went on, of course, to use the chairs in numerous commissions in the common areas of his buildings and as these projects were photographed and disseminated to the world, the chair took on a greater iconography.

The first production examples after the originals were created by hand in the workshops of Joseph Muller. Only one year later the Barcelona chair design appears in the 1931 product catalog of the Bamberg company. At this time, chrome plating was a completely new kind of process in furniture manufacture, borrowed from other industries. Because of this, there was limited access to chroming vats large enough to accommodate the single welded steel frame of the chair, and so early frames were created in chrome-plated steel, and assembled from five individual parts. These component parts were then assembled with a screw connection at each intersection of the frame and cross-member. Joseph Muller examples began with a screw connection lap joint at the corners of each element, and this detail migrated inward, to be concealed by the straps and cushions. 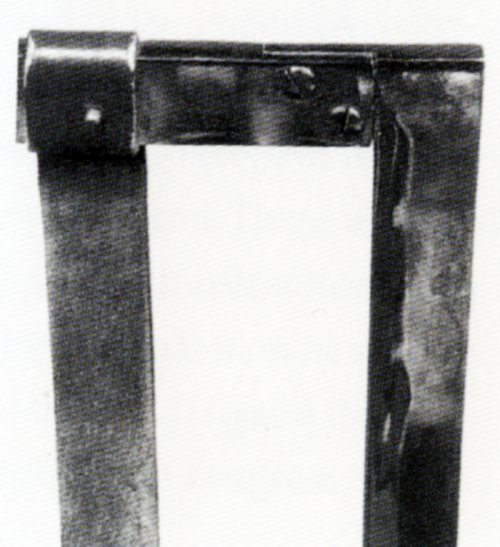 lap joint on horizontal for stability, 1931 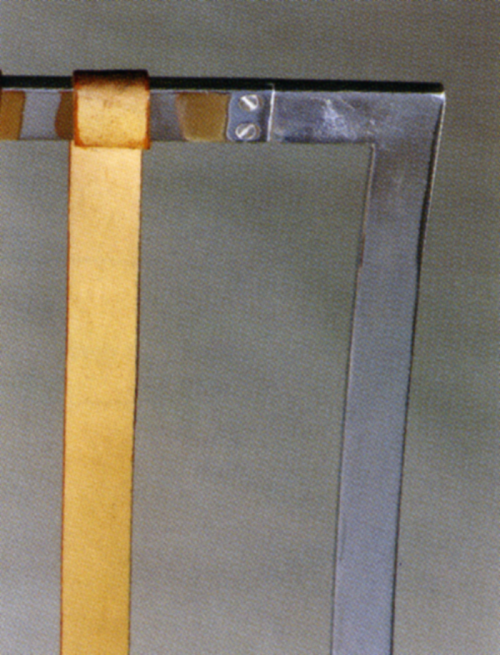 in 1931, lap joint screws moves to horizontal section for stability and later (below) migrates inward to place screws under strap.

Single-welded and plated frames were expensive and labor-intensive because the filing of welds was done completely by hand. In 1932, Thonet took on production which continued until World War II ended production in 1934. In 1938, Mies had settled in the United States. Knoll took on its earliest production in 1947 as a chrome-plated steel version after an initial experiment in aluminum failed. The Knoll production was the first in the United States but not the only one. In the early 1950s the first examples of the Barcelona chair produced in Chicago appear. These revered and considered examples were produced by Gerry Griffin and commissioned by Mies for several of his buildings in Chicago. These were also the first to utilize stainless steel, a material that Mies stated he would have used from the beginning had the technology be available to him. Knoll did not create their version in stainless steel until 1964. 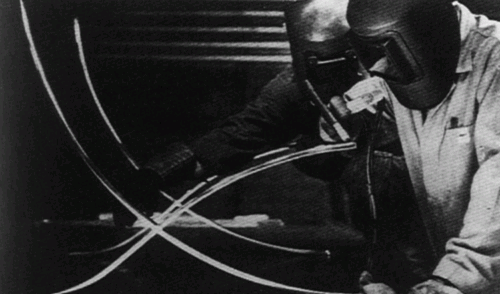 Examples by Griffin have a distinctive clarity to them, with less material utilized at the X-intersection of the sides and a precise corner at each backrest and seat that is razor sharp. The clearly delineated X-intersection was also a flaw, and we sometimes encounter examples from this period that have flattened somewhat over time.

The authentic Barcelona chair has been in nearly constant production since 1929. Like any great design, the temptation to copy or knock-off occurred and is rampant with the Barcelona chair. Vintage examples that are screwed together can be found in the market, but they do not have a sensitive lap joint with small countersunk screw at the corners, but rather the bars are butted together and connected through the ends of the steel with long screws. There are also examples that are currently created in aluminum, or in configurations that were not designed by Mies such as a double-wide sofa version.

who hasn't dreamed of waking up and finding a horse in the garage?

No design in this team org chart.