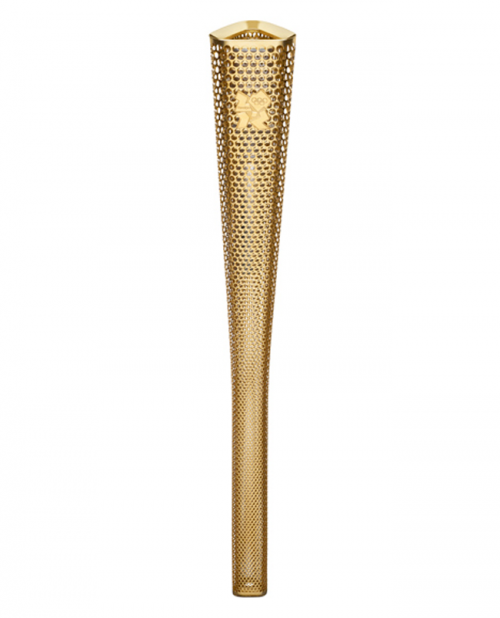 This morning the London Organizing Committee of the Olympic and Paralympic Games (LOCOG) unveils a prototype of the London 2012 Olympic Torch by designers BarberOsgerby. 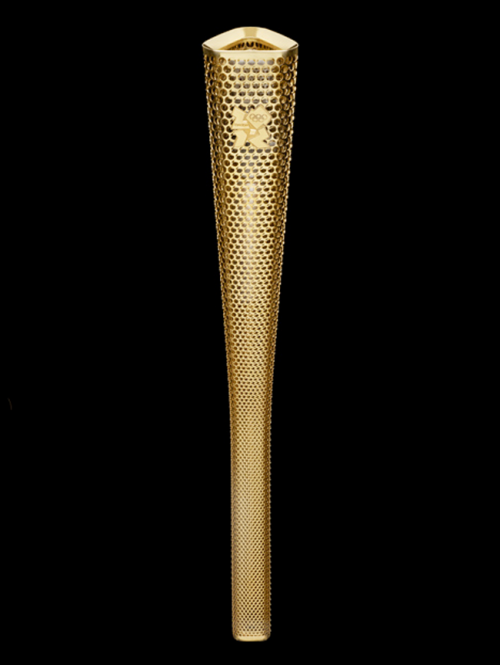 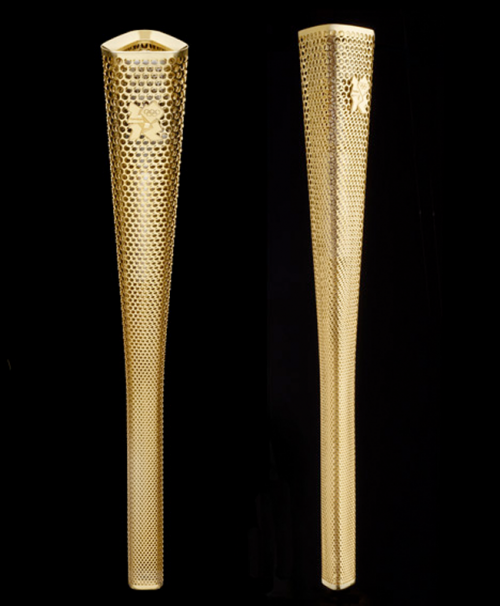 Made from a golden aluminum alloy, the triangular torch will be perforated by 8,000 circular holes representing the 8,000 torch-bearers taking part in the Olympic relay and allowing glimpses of the burner system inside.

The 70-day Olympic Torch Relay, presented by Coca-Cola, Lloyds TSB and Samsung will take the Olympic Flame on an 8,000 mile journey across the UK next summer. From the start point of the London 2012 Olympic Torch Relay at Land’s End on 19 May 2012 an average of 110 people a day will take center stage by carrying the Olympic Flame on its journey around the UK before it arrives at the Olympic Stadium on 27 July 2012 for the lighting of the cauldron at the Opening Ceremony, signifying the start of the London 2012 Olympic Games.

Earlier this year East London based designers Edward Barber and Jay Osgerby won the competitive tender run by LOCOG and the Design Council that set the brief to design a Torch that reflects the celebratory nature of the Olympic Torch Relay and the Olympic Games. BarberOsgerby will be working in partnership with Basildon based product engineers Tecosim and Coventry based manufacturers The Premier Group.

Sebastian Coe, Chair of LOCOG, said: ‘The Torch that carries the Olympic Flame during the Olympic Torch Relay is one of the most recognizable and significant symbols of an Olympic Games. Members of the public right across the UK are busy nominating inspiring people to be Torchbearers and I am thrilled we have a beautifully designed, engineered and crafted Torch for them to carry.

Hugh Robertson, Minister for Sport and the Olympics, said: ‘This striking British design celebrates the role each of the 8,000 inspirational Torchbearers will play as local heroes in villages, towns and cities across the UK. The Torch is a focal point for every Olympic Games and London 2012 will be no different with the Torch Relay bringing the UK together as excitement builds ahead of the greatest sporting show on earth.’

Nicholas Serota, Director of the Tate and London 2012 Cultural Olympiad Board Member said: ‘Elegant, light and understated, the 2012 Olympic Torch shows the flair and confidence of contemporary British design and manufacture.’

Design: The Torch is made up of four key pieces – an inner and an outer aluminum alloy skin perforated by 8,000 circles that are held in place by a cast top piece and base.

Edward Barber and Jay Osgerby, explained: ‘Ever since we were young we have loved the Olympic Games. As designers, this is quite simply the best project going: to design an icon for the Games. We’ve wanted to be involved since July 2005 when we were celebrating winning the bid with the rest of the UK. We have worked hard to develop a Torch that celebrates the Relay, and reflects the passion for London and the Olympic Games. We wanted to make the most of pioneering production technologies and to demonstrate the industrial excellence available in the UK – it’s a Torch for our time. This is our opportunity to represent the UK, in design terms, and we are incredibly proud to be doing so.’

The 8,000 circles run the length of the body of the Torch offering a unique level of transparency and will help ensure heat is quickly dissipated without being conducted down the handle. London 2012 Partner, BMW, have provided the use of their climatic testing facility for the Torch to be tested. More than half of the torchbearers are expected to be young people aged between 12 and 24, and this torch will be one of the lighter Olympic Torches.

Color: The gold color finish embraces the qualities of the Olympic Flame – the brightness and the warmth of the light that it shines. The 8,000 Torches will have a gold-colored finish that delivers an aesthetic beauty whilst having the ability to withstand the temperature of the Olympic Flame.

Shape: The triangular form of the Torch design has been inspired by the identification of multiples of three that are found across the vision and delivery of the Olympic Games:
• The three Olympic values of respect, excellence and friendship;
• The three words that make the Olympic motto – faster, higher, stronger;
• The fact the UK has hosted the Olympic Games three times – in 1908, 1948 and 2012;
• The vision for the London 2012 Olympic Games to combine three strands of work – sport, education and culture.

90% of the 8,000 Torchbearer places will be made available to the public through a number of channels, including the four public nomination campaigns to be run by LOCOG and the three Presenting Partners. The LOCOG ‘Moment to Shine’ public nomination campaign aims to find 2,012 inspirational members of the public to carry the Olympic Flame who have gone beyond their personal best. [ Nominate your Torchbearer ]. There will be further opportunities to get involved via the Presenting Partner programs that launch in June 2011.