It’s hard to believe that 2015 is the launch date of the first Chicago Architecture Biennial. With so many major worldwide architecture & design events going on and with Chicago’s architectural heritage being one of the richest in the world, this event will serve as the epitome of ‘it’s never too late.’ We talked to the biennial’s resourceful, Michelle Boone, Commissioner of the City of Chicago’s Department of Cultural Affairs and Special Events (DCASE), after an exhilarant, worldwide audience filled, first press event. Many would say she’s 100% responsible for this inaugural happening.

[DesignApplause] What’s the genesis of the Chicago Architecture Biennal? How far back does it go?
[Michelle Boone] I was appointed by Mayor Emanuel in 2011, and I would say probably that second week of my tenure I got a call from the mayor wanting to work towards identifying a new platform, a major platform to convene the world and celebrate one of Chicago’s multiple assets. And very quickly through the process of working on the Chicago Cultural plan released in 2012, we landed on architecture. That while we had great organizations like the Chicago Architecture Foundation, and others that were doing their part to introduce visitors to Chicago institutions and Chicago Architecture history, the city itself had done very little to really promote architecture. We had great music festivals, engaging theatre programs and grant programs in support of individual artists, but as an agency very little for architecture, one of the city’s cultural strengths. And professions! I mean, just the sector of architecture as a creative industry is really important to the city. So we began to explore and look at biennials and exhibitions around the world.

[DA] And what year was this?
[MB] 2012. We went to Venice, the granddaddy of them all and met with those folks and they were very encouraging. And you know, they were shocked and surprised when we told them Chicago wasn’t doing a biennial. Every time we spoke to someone outside of the city, we heard that over and over. Through this process and along with our very encouraging and supportive local architecture community we’re here today kicking off our biennial. Looking back it was very easy in the beginning pulling the pieces together, but then we had to do the hard work of pulling everything together.

[DA] To summarize, how long has it taken to get to today?
[MB] We’ve been working on it for three years, in different iterations. The exploration, research, the ideas started back in 2012. I think Sarah (Herda, executive director of the Graham Foundation) coming on board, and really starting to massage the artistic vision for the biennial probably started in late 2013. So, yes, I think the work that she and Joseph (Grima, an architect and writer who co-curated the 2012 Istanbul design biennial) have been engaged in has been at least 18-24 months for sure.

[DA] Venice started in the 80s. The experts say you have 10 years, and with the biennial occurring every-other year, that’s 20 years. Are you going to hang in there?
[MB] Well, the Biennial will hang in there (laughing) I don’t know if it needs me to hang in there all that time. What’s very important, we started right from the beginning establishing the Chicago Architecture Biennial as an organization, an independent non-profit to ensure the sustainability of the event. It’s not dependent on me being here at the city of Chicago, or Mayor Emanuel being here, but that the organization will build the institutional intrastructure to be able to carry this on.

[DA] You’ve been able to see all the installations, can you point me to one or two?
[MB] There are a lot of cool things here and one of the coolest to me is the installation with spider webs, so the spider as architect (Tomas Saraceno, Berlin) is pretty interesting to see.

above> – click image for slide show; Tomas Saraceno, Berlin – When entering into Saraceno’s installation, a visitor’s perception is reoriented in a darkened environment dotted with glowing sculptures that are articulated in silvery spider silk. Formed of complex interwoven geometries suspended in air, each piece appears as a unique galaxy floating within an expansive, infinite landscape. The work’s titles reveal the technical basis for each sculptural element, like the genus and species of the spider collaborators and the amount of time needed to construct their webs – one four months. During the building period of a sculpture, each cube is turned onto its different sides, dislodging gravity and interweaving concepts of freedom of control within the work.

[DA] Anything else you wish to say?
[MB] It’s free! One unique thing about our biennial in comparison to some of the others around the world, is that all of the works are free and accessible.

[DA] How did the largest architecture and design festival ever to be held in North America press conference go? 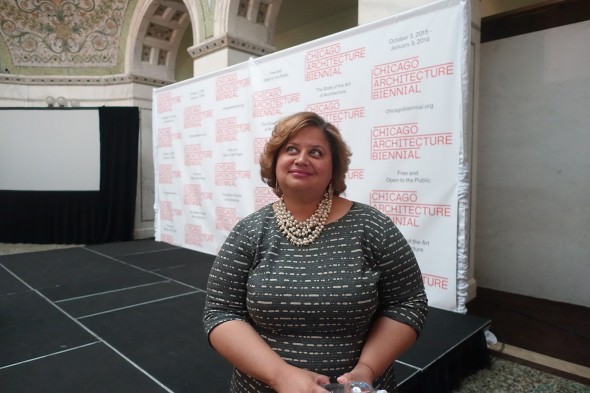 The [ Chicago Architecture Biennial ] launches 3 October 2015, and will run through 3 January 3 2016. @chicagobiennial @grahamfound 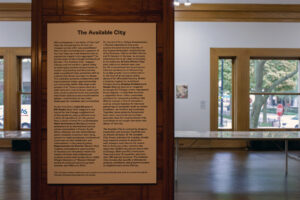 the graham foundation is pleased to present the available city, part of the fourth edition of the 2021 chicago architecture biennial (cab). this edition marks a new approach to the biennial model, bridging the traditional exhibition format to a deeper engagement with the community to expand access and impact. 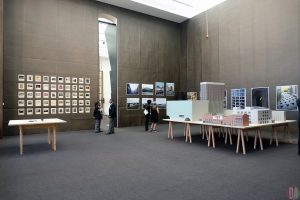 caruso st john (london) present a room that highlights the circulation of images, references, and histories between their own office and their collaborators artist thomas demand and architectural photographer hélène binet. a felt wallpaper - folds - forms a wall around a table of five models. works by benet hang on the wallpaper.