It’s very difficult to catch everything in this show whether in person or online. Our focus on 2014 new offerings surely limited discovery. What we did find in this year’s show provides a myriad of options for everyone’s needs as seen on our list below. We highlight several unique, innovative solutions. 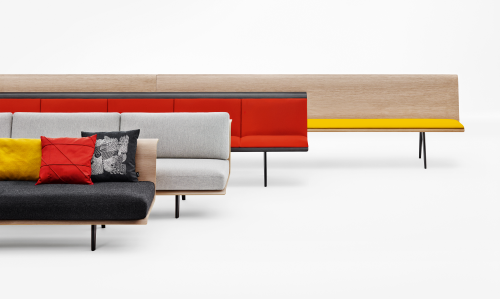 [ zinta ] A bench makes it to prime time. Thanks to the exceptionally harmonious blend of wooden seat shell with softly rounded edges with partial upholstery on a light-looking frame, the bench is elegant and leisurely in appearance. It can serve as simple, single sofa or large-scale organizing principle in an open space. With a range of cushion options with diverse materials and fillings, it can serve a range of environments from residential to restaurant, lounge to office with equal ease. 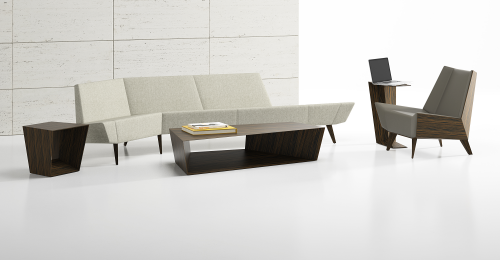 [ avant ] Designer Mark Hirons Avant’s concept of openness include the Lounge Chair, a simple, tailored Sofa and ultimately, to the inviting expanse of a 145-degree Sofa angled to support face-to-face conversation. Defined by a striking angularity, the pieces appear to expand and fan out. Avant seating is available fully upholstered or with wood veneer back that accentuates its crisp profile and sculptural presence. 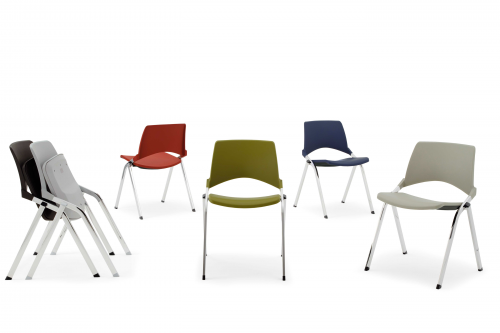 [ lakendo ] LaKendo, designed by Angelo Pinaffo, is a family of chairs available with tip-up or fixed seat. Its multifunctional uses enable several easy configurations: with polypropylene, padded and upholstered seat and back or back in mesh. The metal frame has a peculiar section’s profile which makes the seat more resistant and supports others specific features such as a set for arms, tip-up seat, wheels and supports sled and bench versions. Among the accessories is available the tablet for both arms. 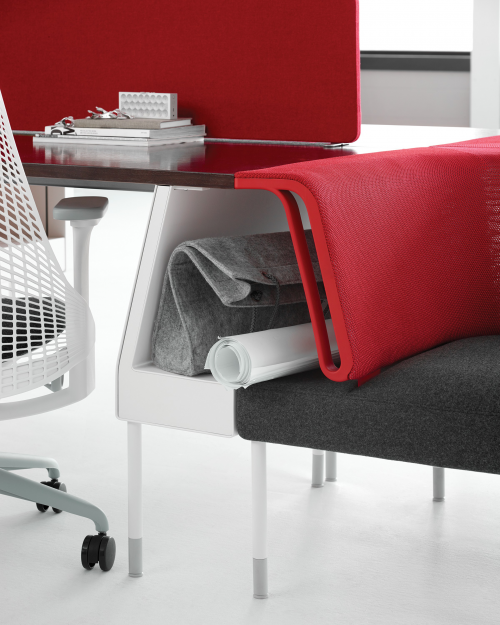 [ social chair ] The Social Chair is the core component of the Public system, bringing new ergonomics, functionality and durability to soft seating while accommodating a range of people and postures. Public is the first office system to support casual work and provide comfort, at the desk, in circulation space, and in group areas—all within a consistent design vocabulary. Designed by Yves Behar and fuseproject. 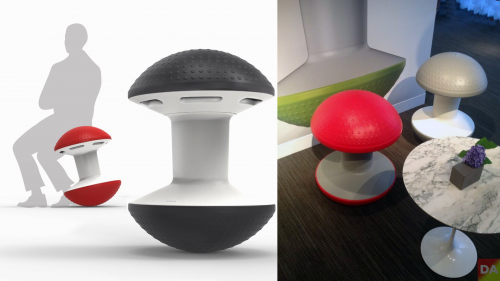 [ ballo ] Created by Don Chadwick, designer of the Aeron Chair, Ballo is a multipurpose stool that encourages users to engage in short-term, active sitting. The identical air-filled domes serve as the base and seat and pressure can be varied just like a Swiss exercise ball. Ballo helps to reduce the risks associated with sedentary behavior and improve metabolism, calorie burn and core strength. There’s also an adjustable height option. 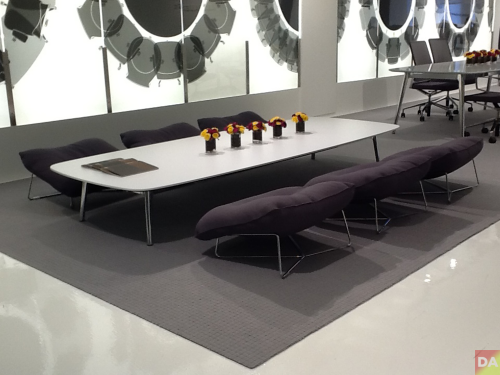 [ lo and syz ] the syz table is one continuous table structure with a seamless flow between the cast legs and aluminum extrusions It comes in heights of 29 and 26 inches as well as a very cool and casual 15 inches. Lo is a charming seat cushion. Research has shown that sitting with the hips above the knees restores gravitational equilibrium and provides longer comfort. 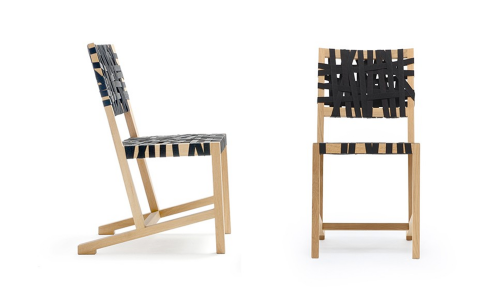 [ berlage ] The Berlage Chair was originally designed in 2004 by Richard Hutten tributing H.P. Berlage, the architect who designed the Municipal Museum of Modern Art in The Hague for the museum’s restaurant. KI reintroduces Berlage in 2014 via their Blu Sky Collection, an initiative of finding intuitive products with unique stories. The strung seat, which is done by hand means each chair by all accounts is unique. 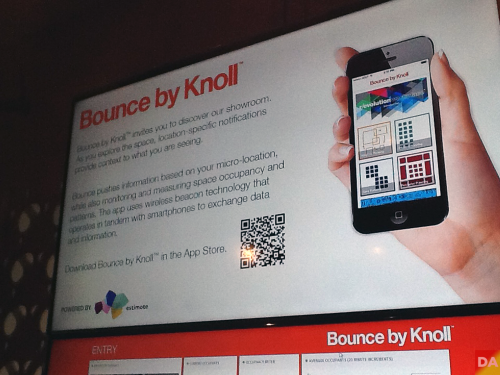 [ bounce by knoll ] In an effort to reduce a level of uncertainty with planning an office space Knoll debuted software developed in partnership with Estimote, a tech start-up building a digital platform to bring content and context to people’s current location. Bounce by Knoll monitors, measures and analyzes space utilization and the work patterns of the office, and offers a digital user engagement platform. Using the Estimote iBeacon platform, Knoll planted seven iBeacons in their showroom that would give attendees a chance to look at occupancy levels at different stations. 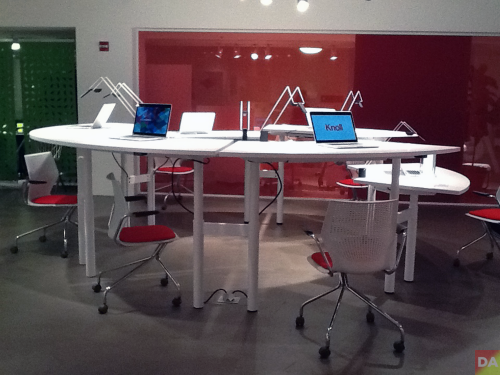 [ antenna round big table ] Masamichi Udagawa and Sigi Moeslinger of Antenna create a clever adaptation of their adjustable height Telescope Desk platform. We’d also like to see a Ballo-like chair pair up with it. 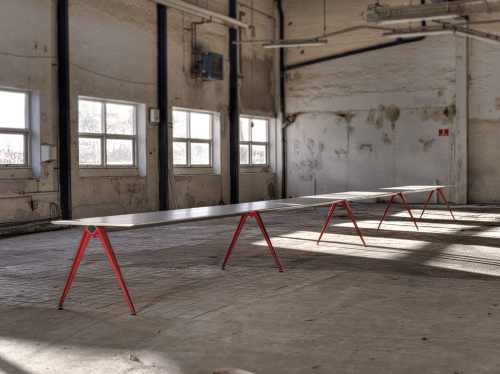 [ grip ] GRIP is a universal table suitable for all purposes. A new design inspired by tightrope walkers, the top balances on a narrow beam supported by cast aluminum legs. Grip™ gets more stable the more weighted it becomes. Bases are die cast aluminum and are available in one size. Finish offered in glass bead blasted (textured) and a selection of powder coat finishes in black, white, red and silver. A variety of top shapes and sizes are offered in all standard Nienkämper veneers and plastic laminates, as well as black linoleum. 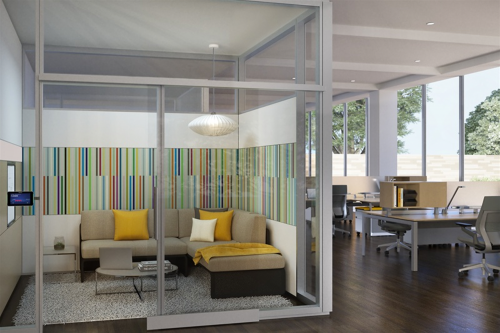 [ susan cain quiet spaces ] Susan Cain Quiet Spaces by Steelcase offer five diverse ways to empower introverts at work. Each space supports specific postures, work modes, and expectations for quiet and privacy supported by a carefully chosen range of architecture, furniture, materials and technology. Every quiet space is designed with V.I.A. which provides superior acoustic performance and offers an atmosphere where introverts can work their best. 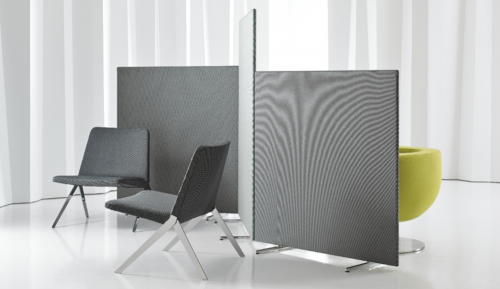 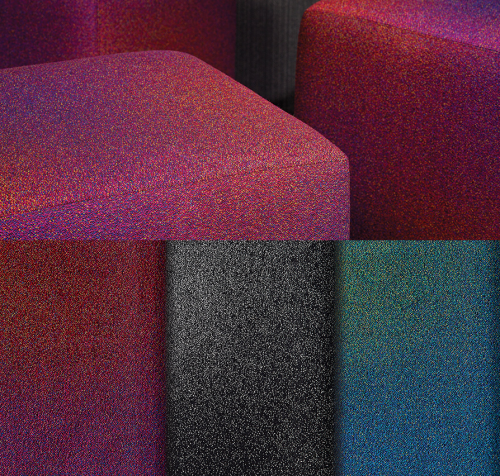 [ millions of colors ] Earlier in the year for Wolf-Gordon, Danish textile designer and artist Grethe Sørensen introduced a ground-breaking technique of translating pixels to threads. Cooper-Hewitt plans to acquire her work once its new building opens in late 2014. 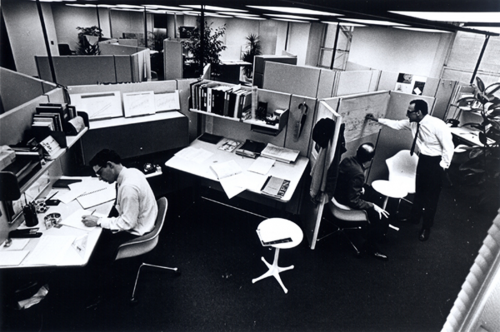 note: (*) we also interviewed 12 designers so stay tuned for more details on these and other great objects. [ best of neocon 2014 winners ]