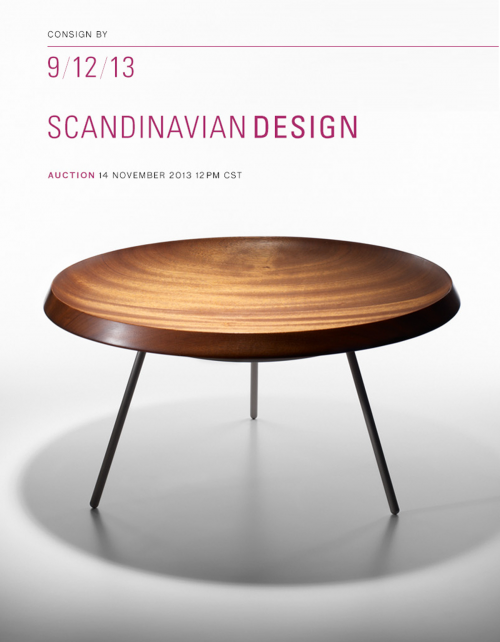 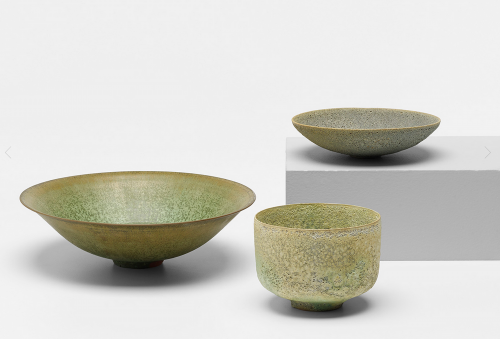 Featured in this auction is a special collection of ceramics by Otto and Gertrud Natzler. Using clays indigenous to California, Gertrud threw vessels which Otto clothed with monochromatic  glazes. Janet Kardon, curator of the American Craft Museum, writes of the Natzlers: “For Gertrud, the pot was an extension of her hand; for Otto, the glazes were the result of a controlled and skillful interaction with chemistry and the vagaries of the kiln.” The Natzlers’ remarkable partnership resulted in over 25,000 vessels and 2,500 glaze formulations. Exceptional among the collection is the Nocturne bottle, a slender, poetic form enhanced by a deep blue and violet glaze (estimate: $20,000-30,000). This example was exhibited in 1971 at the DeYoung Museum in San Francisco. 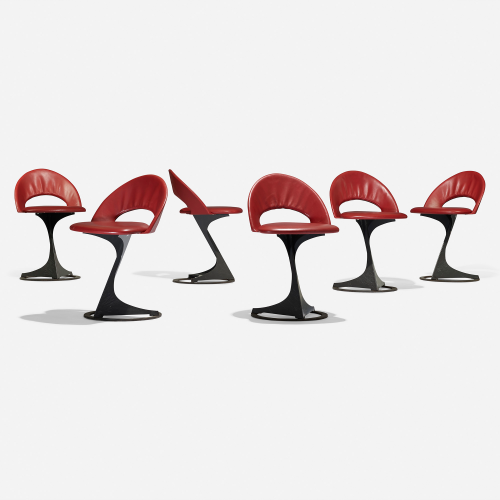 set of six chairs from the tabourettli theatre | santiago calatrava | 1986

Wright’s Modern Design auction opens the 2013 auction season featuring works by the most celebrated designers of the past century. Designs by Charles and Ray Eames, George Nelson & Associates, Jean Prouvé and George Nakashima figure prominently in the sale. Highlights include furnishings designed by Santiago Calatrava for the Tabourettli Theater in Basel, Switzerland, an exceptional Swan sofa by Vladimir Kagan and a collection of puzzle sculptures by Miguel Berrocal. 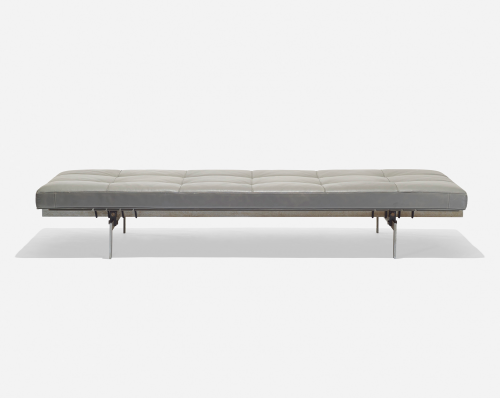 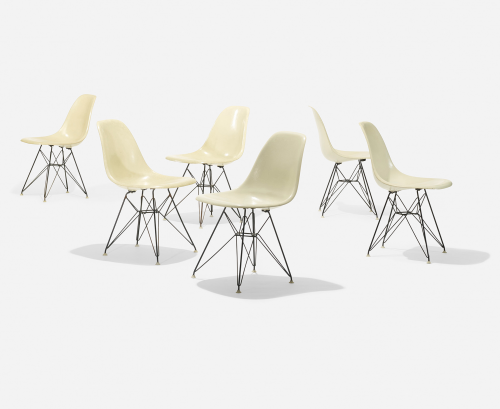 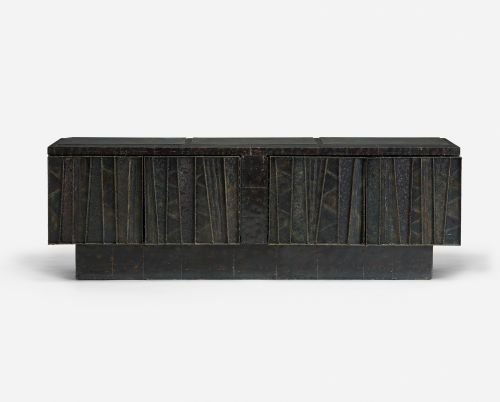 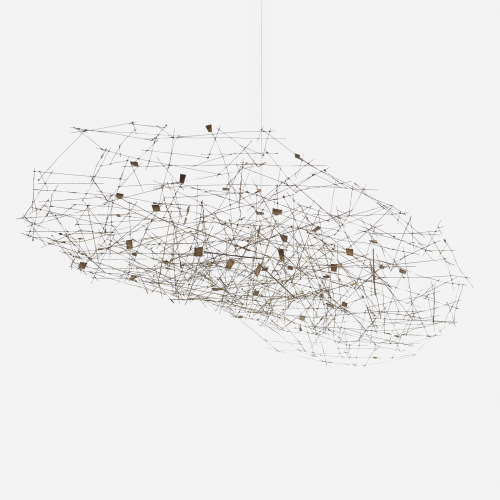 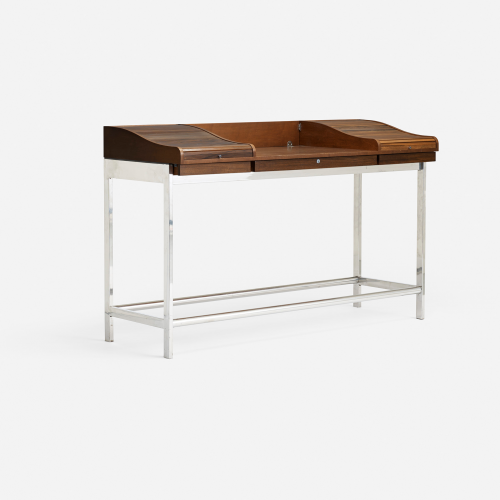 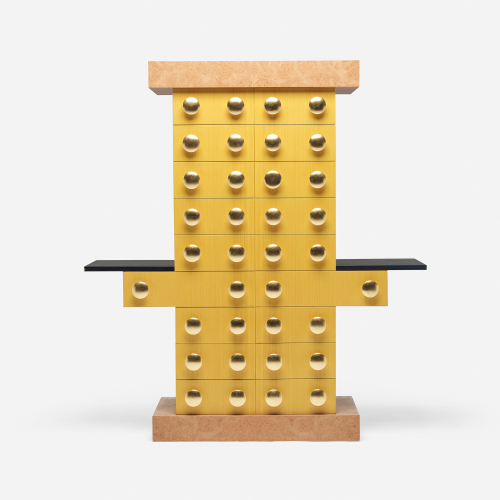 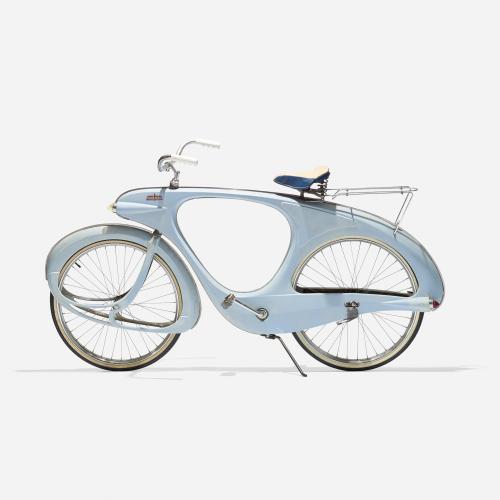 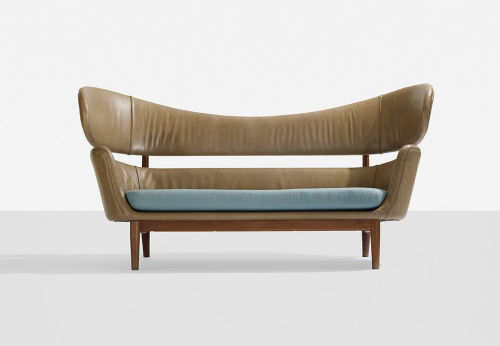 Since 1920, designers from Sweden, Denmark, Finland and Norway have produced forms in natural, tactile materials which rebuff the machine-age industrialism of Bauhaus. A convergence of social transformations, international influences and ancient artistic traditions manifested into new forms which veered away from the classicized, status-driven designs of the past to become a bedrock of modernity.

Crafted of warm woods with a distinct clarity of function and form, Scandinavian design is the most aesthetically consistent and philosophically inclusive design movement of the last century. Its appeal derives primarily from form and material, yet also from the inherent grace, comfort and style of spiritually uninhibited yet formally disciplined design. The Nordic sensibility is seen in the sweeping back and embracing arms of a rare Finn Juhl sofa (estimate: $20,000 – $30,000), upholstered in wool and leather. Its unconventional shape is recognizably Juhl, generous in both spirit and form. 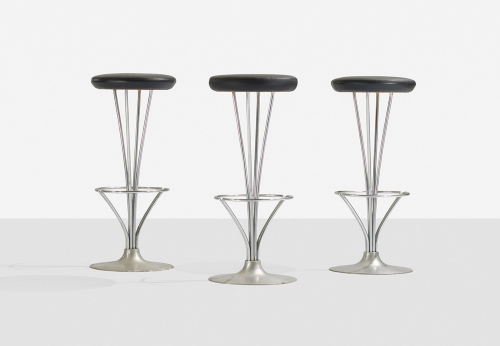 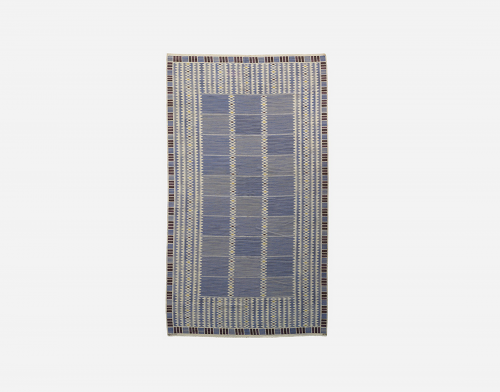 Also of particular importance in the sale is a selection of Swedish carpets by Carl Dagel, Barbro Nilsson and Märta Måås-Fjetterström among others. Scandinavians excel in carpet-making by necessity, since carpets warm homes during the long, frigid Nordic winters. Particularly striking among the group is a hand-woven Salerno Blue tapestry carpet by Swedish designer, Barbro Nilsson (estimate: $30,000 – $40,000). 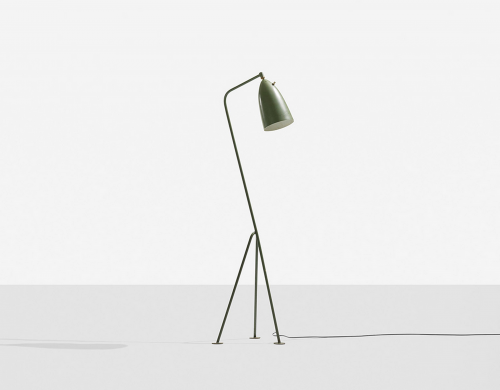 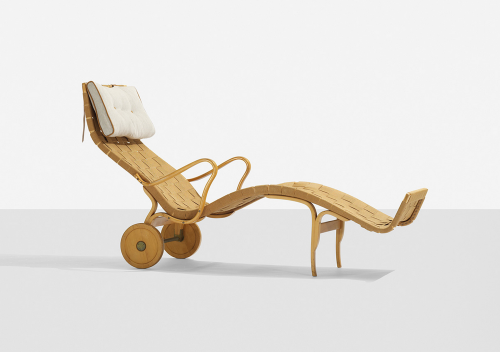 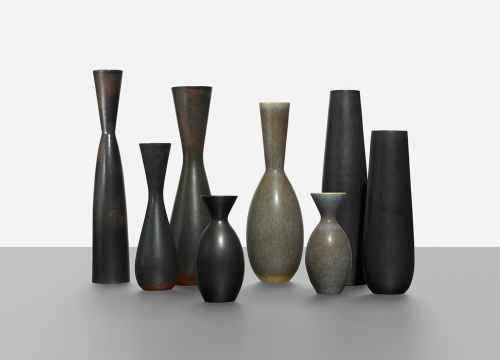 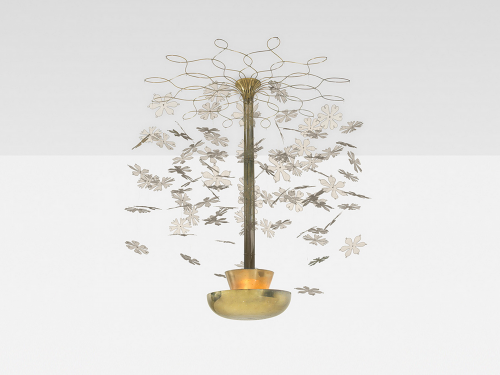 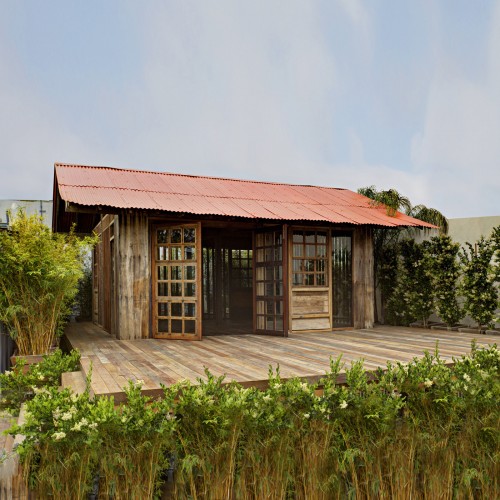 The sustainable, Demountable House designed by the renowned Brazilian architect Jose Zanine Caldas marks a departure from the European Colonial architecture widely popular in Brazil. Perhaps more important it reflects the social and environmental consciousnesses of the architect. Designed in 1980, Zanine conceived of the Demountable House as a structure that was easy to construct. Flat-packed for efficient shipping, the demountable home could be assembled anywhere and by anyone. Passionate about the environment and the destruction of his native rainforests, Zanine used solid reclaimed Ipe wood salvaged from the forests and farmlands of Bahia, Brazil to make the home. 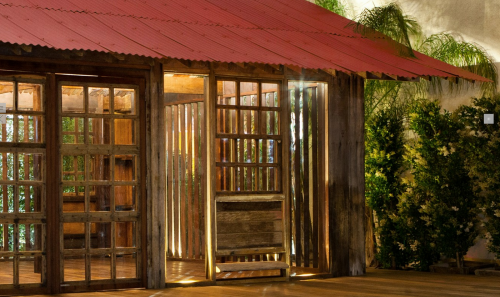 The Demountable House features an open layout of four quadrants separated only by a central column supporting the roof. Internal walls can be added to the user’s specifications. The interchangeable exterior paneling can be customized per the users need. Four panels are designed with moveable louvers for ventilation. Each wall junction is designed with built-in corner shelves. A pair of glass and wood double doors and a single all-wood door, serve as the entrances. 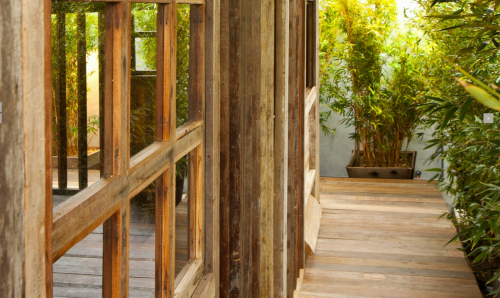 Wright, the industry leader for selling architecture at auction, offers the Demountable House as the final lot of their June 7th Important Design auction. The Demountable house is currently installed in Los Angeles and available for viewing. [ details ]

On December 15, 2011 Wright will auction the Frank Lloyd Wright designed Kenneth Laurent House and furnishings. The property has been consigned to the Chicago-based auction house by the original owner, Mr. Laurent. 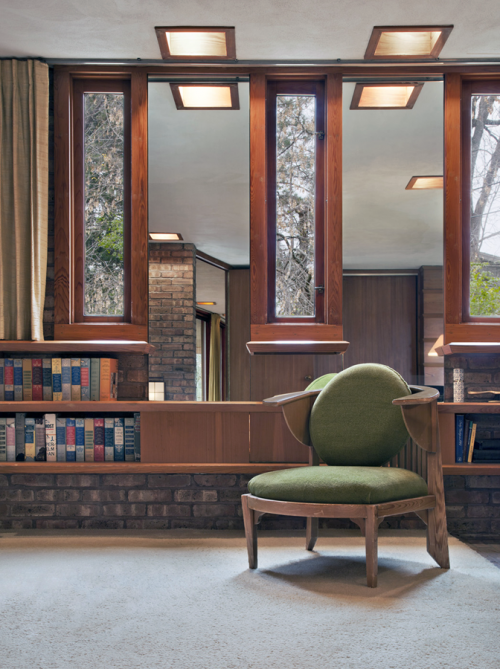 In 1948 Mr. Laurent commissioned Frank Lloyd Wright to build a home that integrated his needs as a wheelchair-bound disabled veteran with Wright’s signature open plan designs. Wright used to opportunity to develop his elliptical plan for the first time, the resulting soft curves, open floor plan and flowing space were utilized in later houses in the 1950s. The Laurents became friendly with Wright and traveled often to Taliesin commissioning interior furnishing for the home and a later addition to the property. In conversation with Edgar Kaufmann, Jr., Frank Lloyd Wright referred to the Laurent House as a serene masterpiece and his “little gem.” 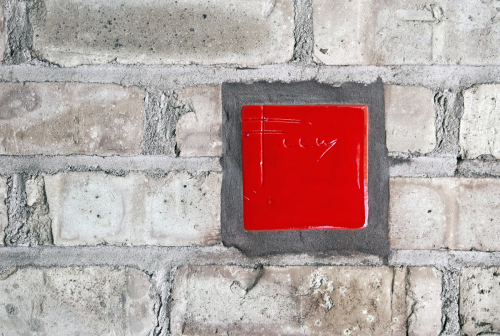 “We are interested in the preservation mid-century architectural masterpieces,” states Richard Wright, President of Wright. “We have an audience that appreciates the historical and aesthetic value of these special homes and is not strictly bound by the values of the local real estate market.”  The Kenneth Laurent house and furnishings will be sold on December 15, 2011 during Wright’s bi-annual Important Design auction, a sale featuring more than 250 lots of exceptional mid-century designs. The home and original Frank Lloyd Wright designed furnishings will be estimated at $500,000 – $700,000. The sale will be conducted with Diane Meltmar of Gambino Realtors of Rockford and in conjunction with Brian Kuzdas of RealEstateAuctions.com.

Wright is an international auction house based in Chicago that has offered historically important architectural masterpieces in their art and design auctions before, most famously with the sale of Pierre Koenig’s Case Study House #21 in Los Angeles that sold in December 2006 for $3,185,600. 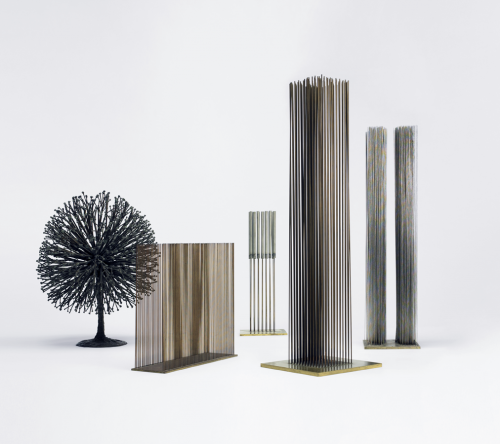 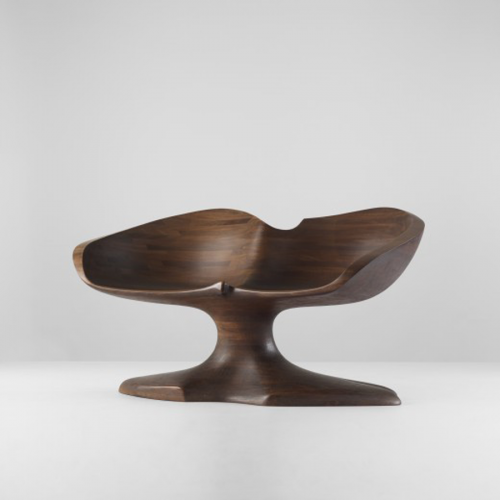 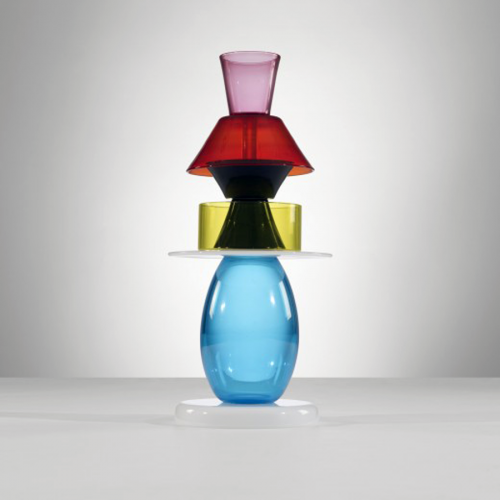