Jaguar and williams f1 to make a hybrid supercar.

Will this be world’s fastest hybrid? A combo Prius and Veyron? Jaguar and Williams F1 is teaming up on a greenish supercar. The hybrid tech is a ‘state-of-the-art, small-capacity, highly boosted internal combustion engine’ and an electric motor on each axle and lithium-ion battery technology from Williams. The Jaguar C-X75 will be four-wheel drive, and able to drive using just the combustion engine, in EV mode with a range ‘in excess of 30 miles or use a combination of the two. There are three drive configurations: EV, Normal and Track.

250 cars will be built, 200 destined as road cars and 50 as racers. You can order one or more today. Production is confirmed for a 2013 delivery. Price estimate $1 million-plus USD. Production name is Jaguar CX-75. [ veyron ] [ car magazine ] 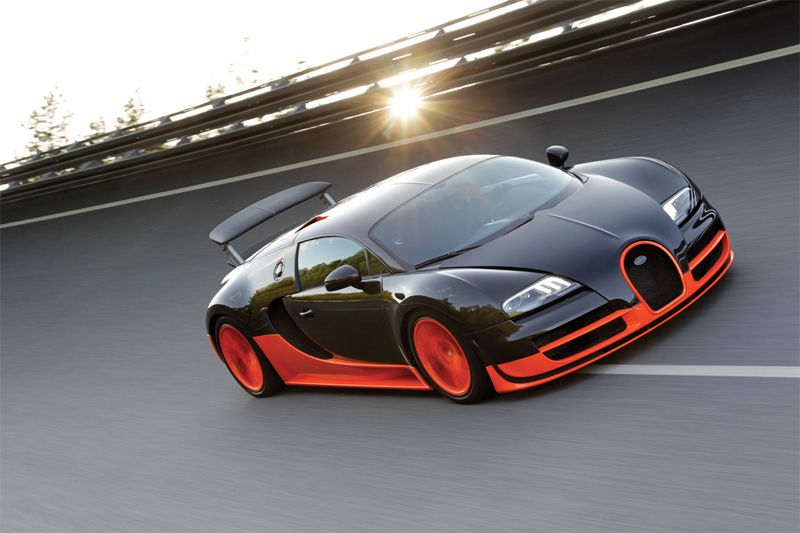 bugatti veyron again planet’s fastest car.
On July 4, 2010, a black and orange Veyron 16.4 Super Sport hit 267.81 mph. The previous record was 256 mph set by a Shelby SSC Ultimate Aero in 2007. It does 0–96 km/h (60 mph) in 2.46 seconds. While thinking about what to write in this article there were thoughts of selling her short. Not green. Maybe not agile. Well engineered but what about design. She’s a very good looking, very very fast car. 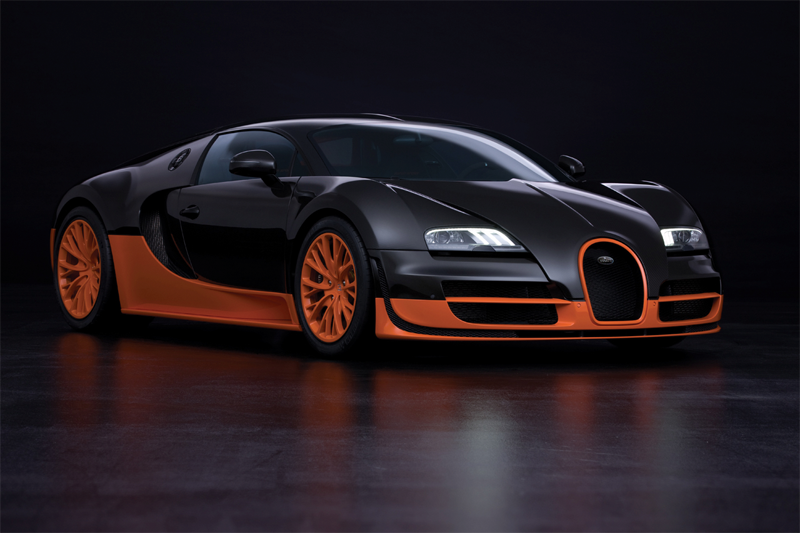 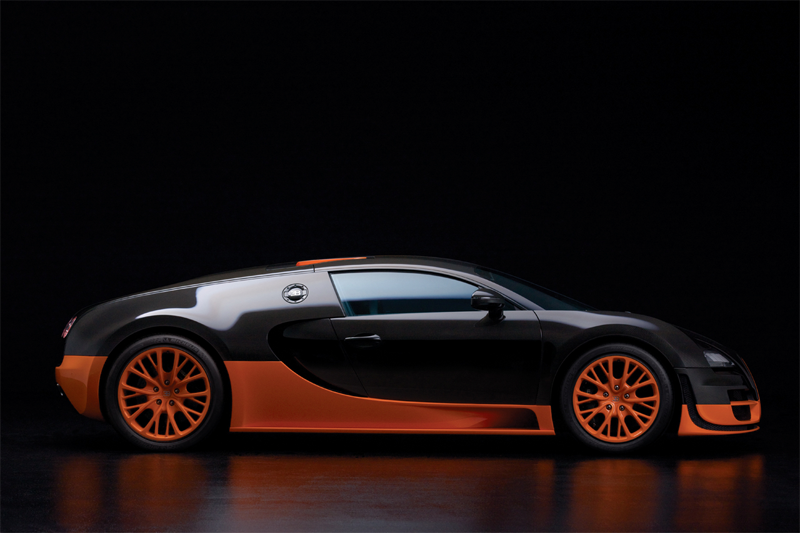 above: the carbon-fiber monocoque is stiffer yet lighter, the suspension has been stiffened and Bugatti says the car is capable of 1.4g of lateral acceleration. 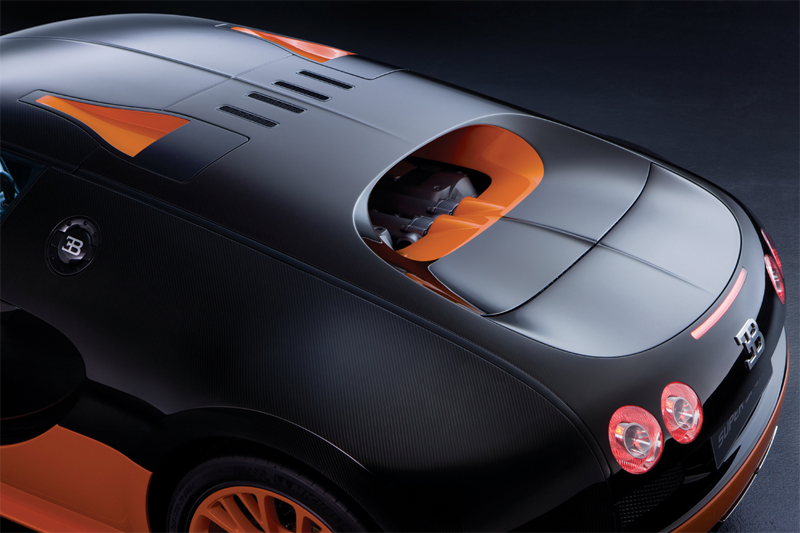 above: the body has been revised, and the engine draws air through a pair of NACA ducts in the roof instead of two big scoops.

The first five production super sports will wear the same black and orange finish as the record car and all production models will be electronically limited to 257.9 mph to protect the tires. Cost: $2.4 million.

The new Bugatti Veyron 16.4 Super Sport takes production sports cars to a whole new dimension Wolfsburg/Molsheim, July 4, 2010 – on a beautiful sunny day at 25 degrees the Bugatti Veyron 16.4 Super Sport achieved a new land speed world record for production cars, on the proving grounds of the Volkswagen Group at Ehra-Lessien (nearby its headquarters at Wolfsburg). In the presence of the German Technical Inspection Agency (TÜV) and a representative of Guinness Book of Records the Super Sport achieved an average top speed of 431 km/h (267.81 mph.)

Saturday, 2 pm – Bugatti’s Pilote Officiel Pierre Henri Raphanel puts his helmet and gloves on, pulls the safety belts tight whilst the engineers check the car a very last time: tyre pressure, temperature, all systems go. Then the orange black Super Sport crosses the light barrier, from now on the time will be taken, within one hour the car has to drive from South to North and then in the opposite direction. No one but the driver is allowed to touch the car during this time. The tension rises. A few minutes later we can hear from the left side the sound of a starting jumbo jet coming closer towards us. First we perceive the headlights of the Veyron, then we can recognize the shape of the car, a loud wooosh…. and Raphanel dashes in top speed past us. The GPS-tachometer stops at 427, 933 km/h (265.9 mph.) Now the same procedure from the opposite direction. This time the car reaches 434, 211 km/h (269.8 mph.) As average top speed the representatives of the “TÜV”and Guinness generate a value of 431, 072 km/h (268 mph). This even hit Bugatti’s engineering team by surprise.

“We took it that we would reach an average value of 425 km/h,” explains Bugatti’s chief engineer Dr. Wolfgang Schreiber, “but the conditions today were perfect and allowed even more.”

The climax of the Veyron series: the Bugatti Veyron 16.4 Super Sport

Had a model been especially popular or highly successful in races, Ettore Bugatti’s customers often pushed the master to tease out of the engine a few horsepower more for their future car. Bugatti Automobiles S.A.S. had been in a similar situation when their existing customers asked the company to not only design their second model optically differently but to also create a version with a sportier and more extreme driving experience. The result is a car with a uniquely high performance of 1,200-hp (882 kW) offering experienced drivers a whole new dimension of excitement, with a maximum torque of 1,500 Newton metres and a limited top speed of 415 km/h (to protect the tyres) but, the technique of the Super Sport is identical to the record car. The first five Super Sports to come off the production line will constitute a special series of their own, with the same configuration as the landspeed record car.

The Super Sport is a consequent of the further development of the classic exclusive 1,001-hp Bugatti Veyron 16.4, launched in 2005. This model offers a stunning set of specifications, such as the twin clutch gearbox with seven speeds, the extraordinarily precise driving performance in bends and excellent stability when braking and accelerating.

Continuous work in extreme performance ranges lead to constantly new conclusions, which enabled the engineers at Bugatti to develop the Veyron into a direction in which the driver can reach new dimensions. Every modification is designed to produce an even more powerful car for an agile ride. Four enlarged turbochargers and bigger intercoolers have been used to boost the power of the 16-cylinder engine, and the chassis has been extensively redesigned to maintain safety at extreme speed – thanks to slightly raised main-spring travel, stronger stabilisers, and new shock absorbers with a complex architecture originally developed for racing cars. This gives noticeably more precise control of the wheels and the car as a whole. With lateral acceleration of up to 1.4 G and improved interaction between the tyres and the intelligent all-wheel drive system, the Super Sport offers perfect handling and even more powerful acceleration of 1,500 Newton metres on corner exits.

The body has been fine-tuned to improve aerodynamic efficiency and maintain perfect balance in every situation, while the new fibre structure of the all-carbon monocoque ensures maximum torsion rigidity and passive safety – at reduced weight. The skin is made entirely of carbon-fibre composites, and the new Bugatti Veyron 16.4 Super Sport is available in 100 per-cent clear- lacquered exposed carbon on request.

Every detail of this car, and not just its use of advanced motorsport technology, harks back to the pioneering spirit of company founder Ettore Bugatti. This brilliant designer came from a family of artists, and his philosophy was always to combine mechanical perfection and exterior beauty. This ethos remains alive and well at the company, and the Bugatti Veyron 16.4 Super Sport is wholly unmistakable, with every external modification serving to coax greater performance from the car.

The Super Sport’s flat, elongated silhouette is immediately recognizable. The 16-cylinder engine gets its air from two NACA ducts integrated into the roof, rather than from scoops above the engine. The front air intakes have been expanded and reshaped, with the lower one extending elegantly around the sides to the wheel arch. The revised back looks sportier due to the double diffuser and a centrally arranged exhaust system.

Bugatti has a tradition of making super-sport versions of successful models, usually with racing chassis and supercharged engines. These cars were considered as true racing machines for diehard Bugatti devotees. The most successful were the type 55 and type 57S; only around forty of each were built.

Bugatti Automobiles S.A.S. has sold 260 Veyrons and 35 Grand Sports by now, of which 249 Veyrons and 22 Grand Sports had been delivered. The Super Sport will begin production this autumn at Molsheim along with the Veyron and the Grand Sport. The first five cars – known as the World Record Edition – are in a special black exposed carbon and orange finish and have already been sold.