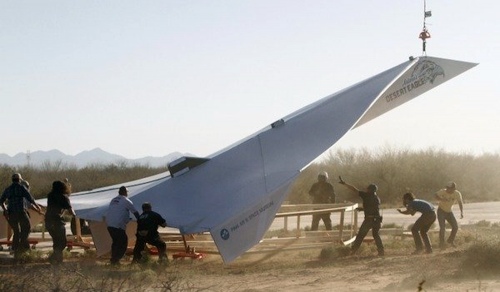 A 45-foot long paper airplane flies 100 mph and soars to an altitude of 2,703 feet for 10 seconds before the crash landing. The world’s largest paper airplane is name Arturo’s Desert Eagle, named after a 12-year-old-boy who inspired the design.

The plane is made of layers of falcon board, which is described as a type of corrugated cardboard, similar to a pizza box. The plane was designed and built in Lancaster by Art Thompson, who helped design the B-2 stealth bomber, but the design was based on a paper airplane folded by 12-year-old Tucson resident Arturo Valdenegro—winner of a paper airplane fly-off sponsored by the Pima Air & Space Museum in January.