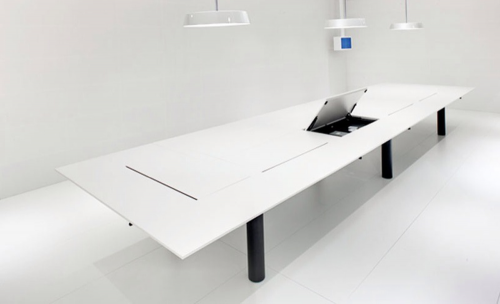 naoto fukasawa has designed a new table for vitra.

Executed with Fukaswa’s usual cool precision, it is called Kuubo. As Vitra notes, it “exudes purist elegance.” Its theme is hidden storage. One image shows a couple of dozen lemons tucked beneath one of its work surfaces. Are we to read a lemon into lemonade joke into this? It is also in keeping with the new trend in furniture–the “common table” that can be used for meetings or as a shared surface combining in effect many cubicles. “Kuubo lends itself to many different kinds of work processes – particularly where emphasis is placed on a successful joint team effort and where a culture of open communication is encouraged,” says Vitra’s prospectus. “Kuubo is well suited as a central team table in such an environment, serving many purposes as it can be easily adapted within seconds for different situations and uses.”
designer: naoto fukasawa
producer: vitra