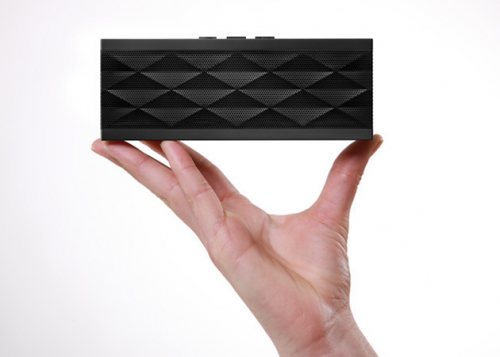 the smallest wireless speaker and speakerphone on the planet.

A new design by Yves Behar’s Fuse Project is called Jambox. What is it? A wireless speaker and a take-off on the old fashioned boom box radio/tape player.

Fuse says: “Using principles of minimalist design, less parts and simpler assembly, we designed the JAMBOX to be portable, robust and have maximum sound output integrity. With its stainless steel construction and industrial-weight molded rubber casing, it is built differently from other typical speakers: All four sides of JAMBOX are wrapped in a single grill to cut down on moving parts. The perforated metal sheaths are textured to reduce vibration, and bear four distinct patterns that visually reflect sound in the form geometric patterns, this brings an artisan quality to the JAMBOX’s pure box aesthetic.

We also designed the communications around the JAMBOX, starting with the simple sneaker-box packaging that romanticizes the original boombox, “that was then”, with new modes of consuming and sharing music, “this is now.”

Say goodbye to that giant boombox circa 1985! We are launching our first Jawbone product that blasts noise instead of eliminating it! Here comes JAMBOX, a tiny wireless speaker to make those jams on your phone or ipad sound, well, awesome.  And it’s also a speakerphone, in case the boss calls during the party… Available in 4 sound-proof colored textures at Apple stores on November 14, and at jawbone.