singapore-based firm woha announces their contribution to the xv international architecture exhibition—la biennale di venezia (28 may-27 november 2016), as part of the gaa foundation’s collateral exhibition time space existence. located at the palazzo bembo, fragments of an urban future answers to the most pressing issues facing megacities today—unprecedented urbanization, accelerating climate change, and the need for preservation of tropical biodiversity. a selection of woha’s most recent work shows how the firm’s vertical ecosystems transform these challenges into inspiring models for sustainable building.

three projects selected from woha’s innovative portfolio are the centerpiece of the immersive multimedia exhibition, designed to draw visitors into the vertical environments. among them is parkroyal on pickering (2013), an innovative hotel that has been celebrated for its topographical architecture and the blurring of boundaries between building and landscape; skyville @ dawson (2015) boldly redefines the model for social housing development with its sky villages and lush gardens on multiple ground levels; and the oasia downtown hotel (2016), enveloped by a living green façade, embraces the notion of breathing architecture and reimagines urban ecosystems for both humans and living creatures alike. 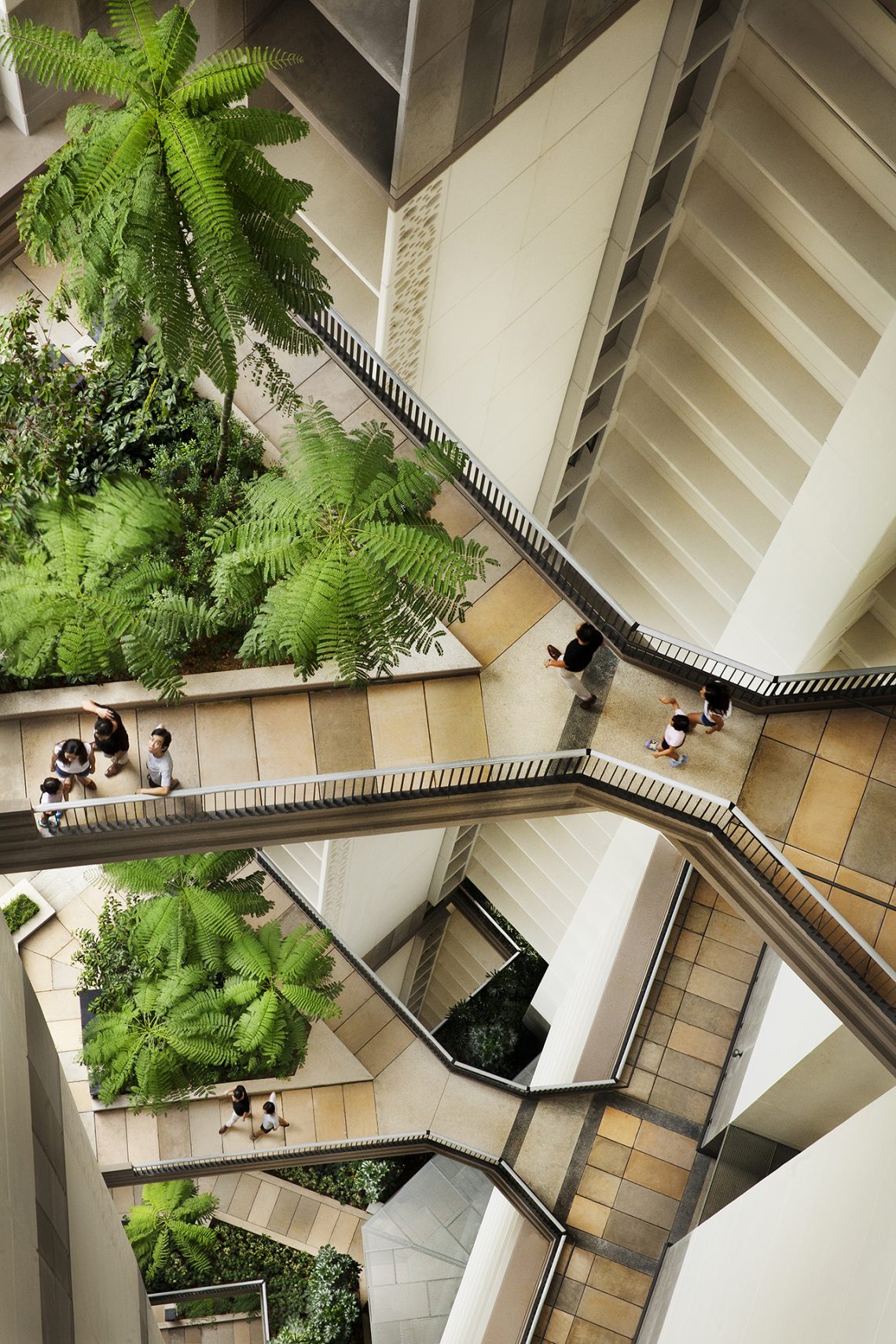 above / below> skyville @ dawson is a public housing project that addresses the themes of community, variety and sustainability. three 47-storey towers are designed with breezeway atria that are cooled and ventilated by horizontal and vertical breezeways. every dwelling unit belongs to a ‘sky village’ that comprises 80 homes. a total of 12 villages are stacked in four layers across the 3 inter-connected blocks. to maintain a sense of human scale, every village shares community spaces and a communal terrace. a publicly accessible park on the roof, and extensive public parkland at ground level, further contributes to the high-density high-amenity development. 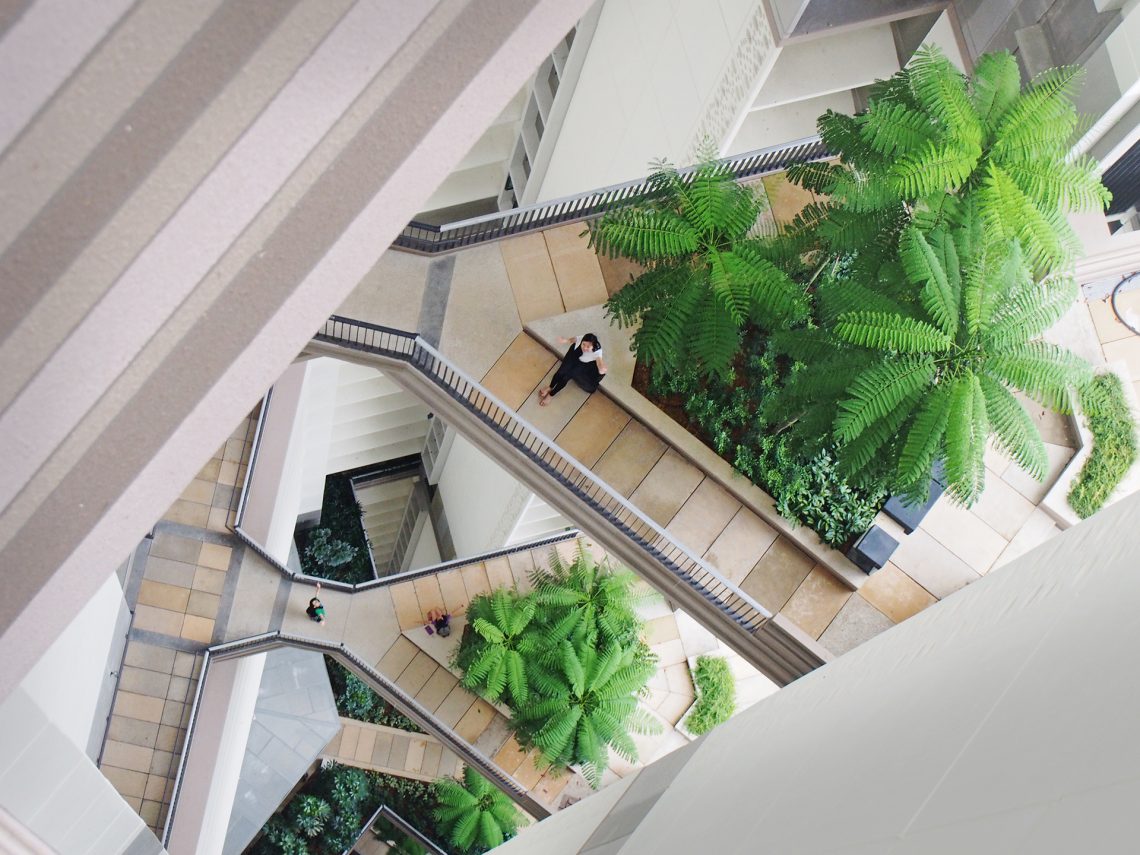 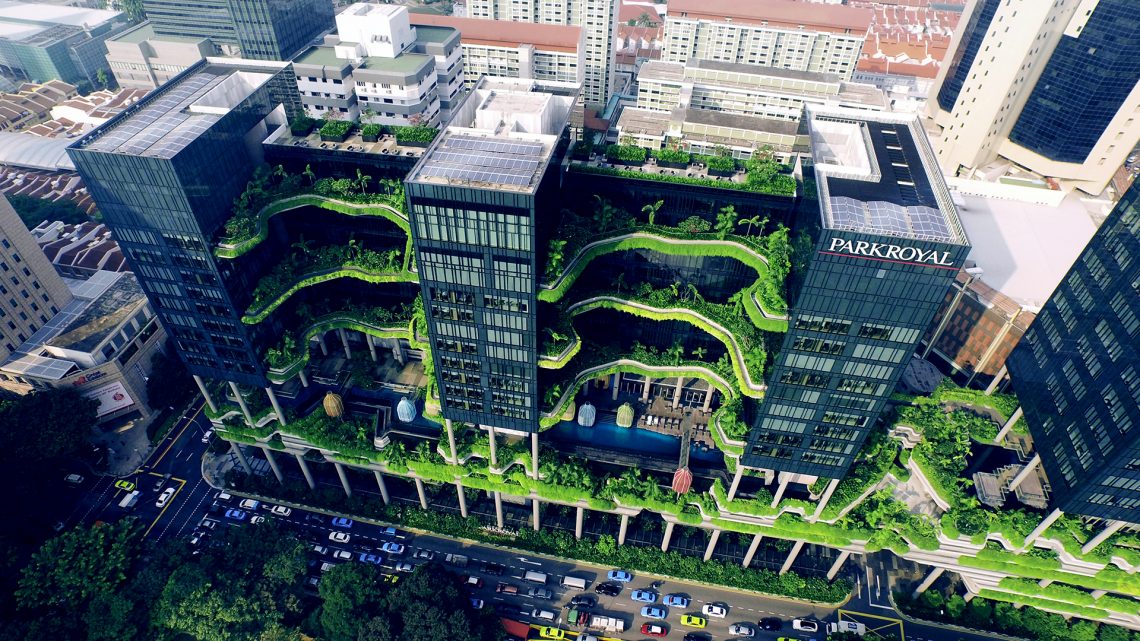 above / below> based on the concept of a hotel-and-office in a garden, parkroyal on pickering investigates the potential of green intensification in a dense metropolis and transforms the abstract building-as-silhouette into one with rich detail and tactility. its topographic architecture podium is designed as a land form for landscape that extends the green of the adjacent public park vertically into the building as one continuous sweep of urban parkland. facilitating the public life of the city, the building’s porte-cochere opens up as a gateway that physically and visually links singapore’s business and historical districts. 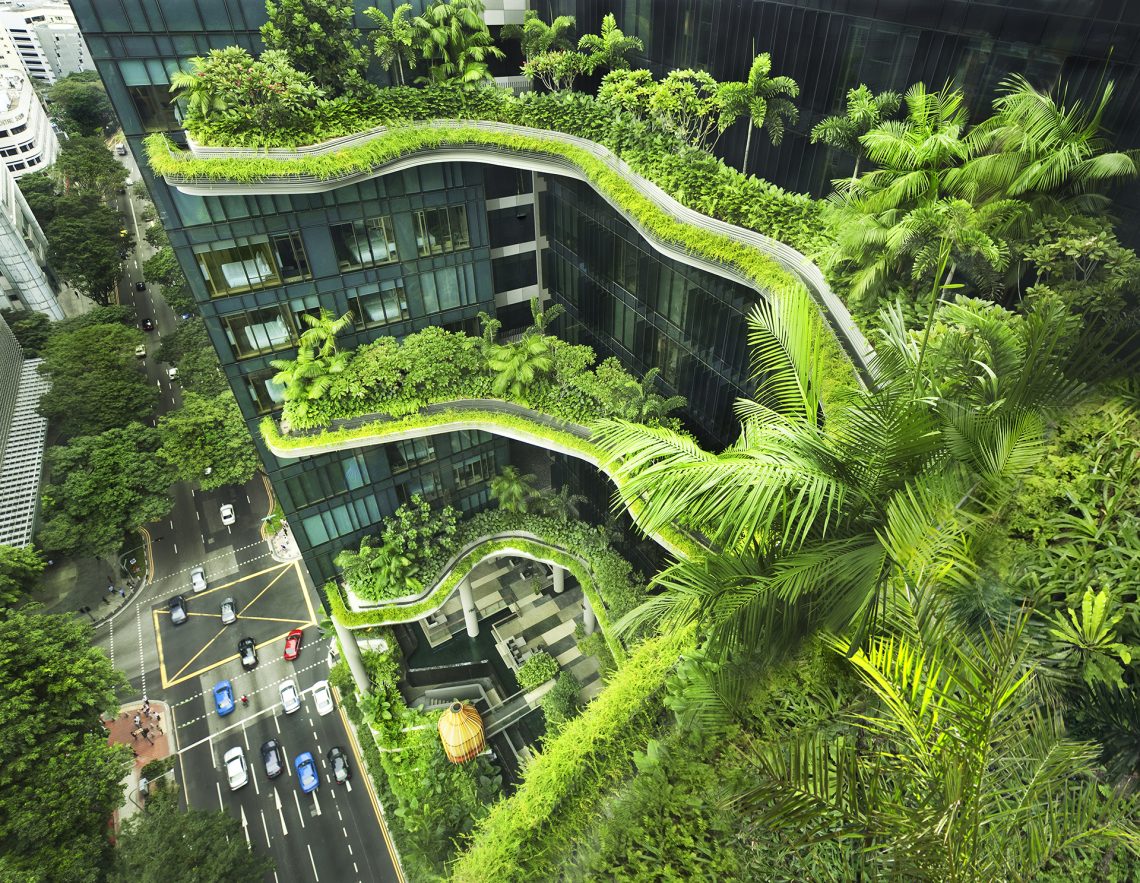 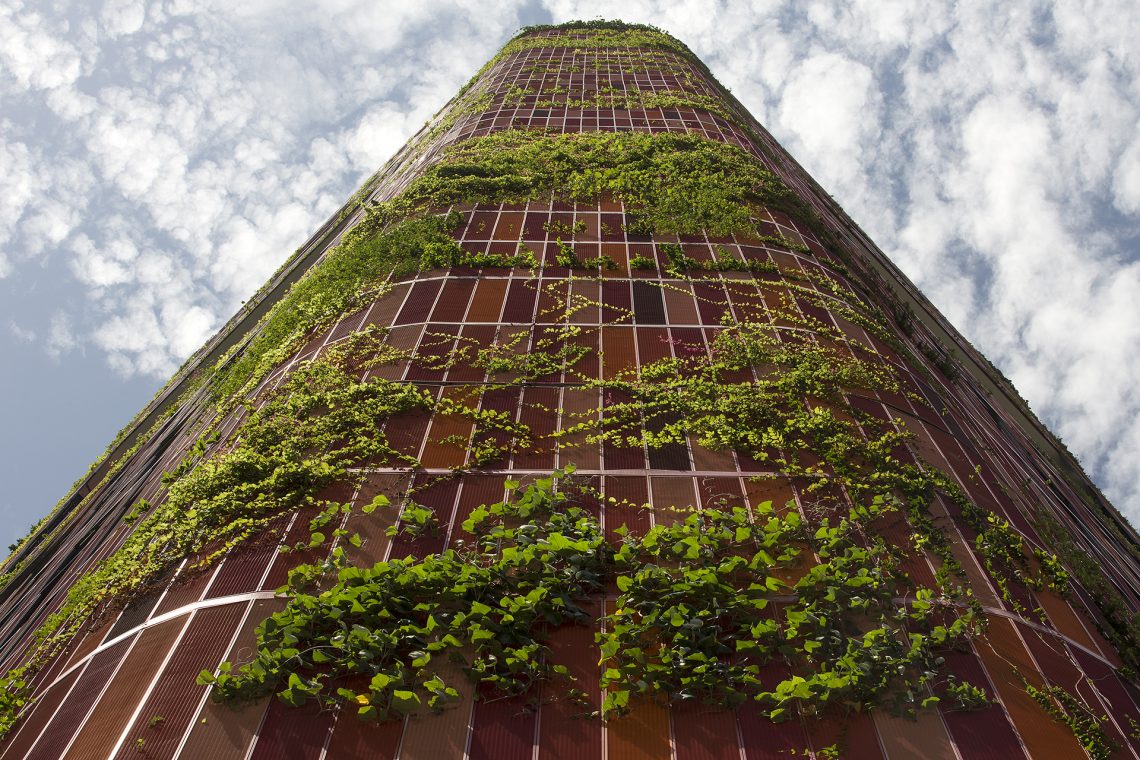 above / below> a verdant tower of green in the heart of singapore’s dense central business district, oasia downtown is a prototype of land use intensification with a tropical approach. instead of a fully glazed and air-conditioned building, the tower contains three well-ventilated atria surrounded by l-shaped blocks of hotel rooms and offices. these provide naturally cross ventilated spaces and dynamic internal views. each elevated ground level is treated as an urban scale veranda, sheltered by the one above. landscaping forms a major part of the development’s material palette, creating an alternative image that is distinct from the surrounding curtain-walled towers of the cbd. 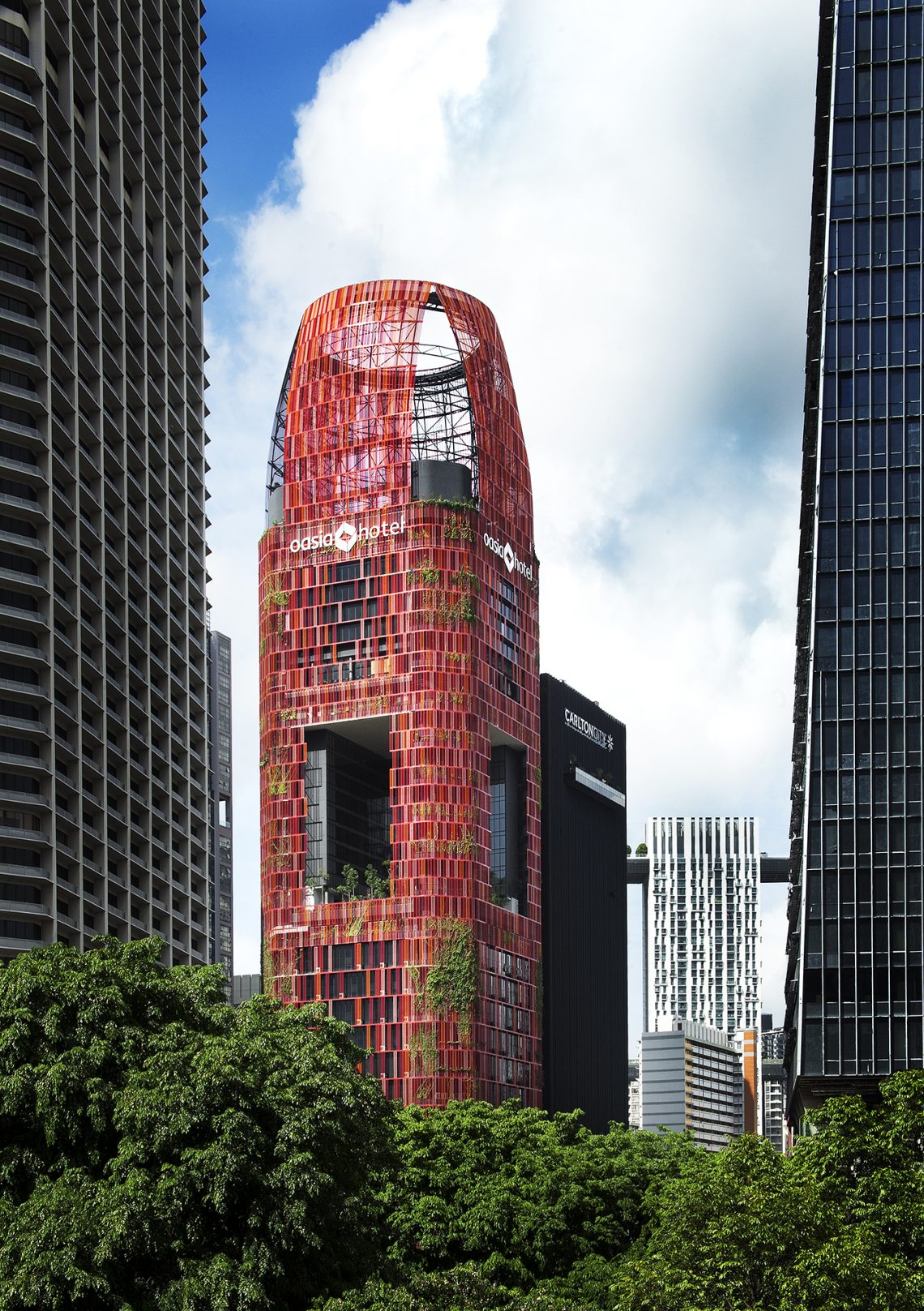 [ woha ] in 1994, architects wong mun summ and richard hassell founded singapore-based woha. as one of southeast asia’s preeminent architectural offices, woha integrates environmental principles at every stage of the design process. their strategies champion biodiversity, sustainability, and the local vernacular to design responsive building solutions for the city of tomorrow. the firm’s awareness of context and tradition is intertwined with an ongoing exploration of contemporary architectural questions, uniquely fusing practicality and invention.

woha’s architectural repertoire—throughout southeast asia, china, and australia—ranges from residential towers and hotels to transportation hubs and public institutions. their designs reconfigure the elements of a building, breathing smart design into the dense landscape of the megacity. woha’s blueprint for sustainable development imagines a biophilic future where towering structures evolve in harmony with native ecosystems and urban communities.

underscoring woha’s contributions to the advancement of architecture, the practice has received numerous international awards, including the international highrise award (2010), the prestigious aga khan award for architecture (2007), the renowned riba lubetkin prize (2011), and most recently, the urban habitat award (2015). the firm’s most acclaimed projects have been featured in many international publications, including urban environment design (ued) magazine (2015), dense + green: innovative building types for sustainable urban architecture (2015), greening asia: emerging principles for sustainable architecture (2012) and the phaidon atlas of 21st century world architecture (2011). in 2011, a traveling exhibition devoted exclusively to their work opened at the deutsches architekturmuseum in germany. garden city mega city (2016) follows the publication of four substantial monographs—woha: selected projects vol. 1 (2011) and vol. 2 (2014), woha: breathing architecture (2011), and woha: the architecture of woha (2009).