the eagerly awaited design concept of the new lucas museum on chicago’s lakefront presents a taller than expected, futuristic and organic shapliness that makes an eloquent counterpoint to nearby man-made chicago architecture.

here’s what the 39-year-old architect, ma yansong of beijing says on mad’s website:

the architectural concept for the lucas museum of narrative art explores the relationship between nature and the urban environment. inspired by the work of frank lloyd wright and mies van der rohe, the design integrates the natural beauty of the park and lake michigan with the powerful man-made architecture of chicago. the design furthers the museum’s mission to be a place of education, culture, and inspiration.

the lucas museum design is both futuristic and timeless. its continuous undulating organic surface blurs the line between structure and landscape. as the harbor rises up to the land, it merges with stone surfaces that reach up to the sky and ultimately crescendos into a “floating” disc. the museum is not an isolated object, but a spatial experience that is defined by the people who occupy and interact with it. its uninterrupted stone surfaces are as primitive as it is futuristic, evoking the great achievements of architectural history. it is a place to discover and explore, to communicate and contemplate. more than a building, it is an urban vista for social interaction, bringing people closer to each other and to nature.

the seven-level, 110-foot-tall, 400,000-square-foot museum will occupy the southern half of a 17-acre site offered to lucas by mayor rahm emanuel. emanuel depicts the museum as a fitting statement to complete chicago’s museum campus, an array of three natural history museums: the adler planetarium, the field museum and the shedd aquarium.

[ main elements of the proposal] > visitors could park in an existing nearby waldron parking deck. a new pedestrian bridge would bring visitors to the museum’s main entrance facing lake michigan.
> that entrance, outdoor plazas and an amphitheater occupies the museum’s second level. the design includes a goodly addition of green space to the museum campus. “the whole idea of the building is to be part of nature, part of (the) landscape,” the architect said.
>the lucas team will work hard to accommodate bears fans at nearby soldier field.
>the building is comprised of three levels of exhibition space organized in continual loops. the white conical mass is topped by an elevated disc at the peak, which is to contain an observation deck offering 360º views toward the city and adjacent lake michigan. 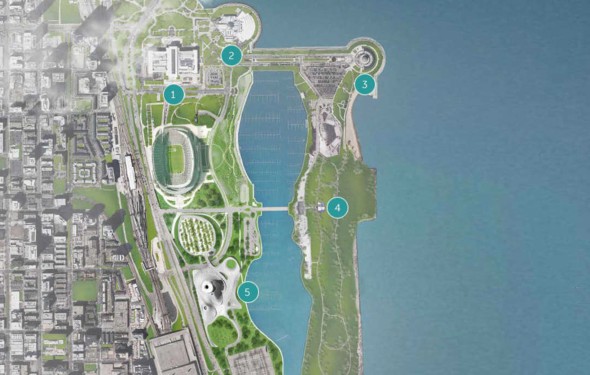 it comes as no surprise in chicago that the project has its detractors for building on the lakefront. the chicago plan commission will be among the city bodies reviewing the lucas museum’s plans. there’s a 1973 lakefront protection ordinance to contend with, which calls for chicago to protect the shoreline’s open character.

[ mad architects ] ma has won international recognition for his undulating museums in china and the shapely “marilyn monroe” residential towers near toronto. mad architects is joined by local firms studio gang and voa associates. for more details on the museum and its project team, see designapplause’s previous article. [ lucas museum of narrative art ]