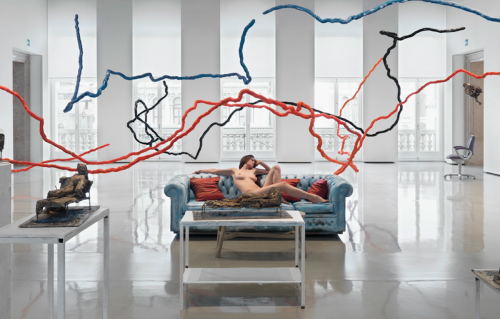 Even though last week our focus was on Milan, there are, in fact, other things happening in Italy. In Venice Urs Fischer’s new exhibition “Madame Fisscher” opened at Palazzo Grassi. This show, like his others, is all about objects. Here’s what he had to say about that:

“Everybody likes objects; everybody likes different objects. It comes down to what objects you want to put in your art. [Jeff] Koons and [Claes] Oldenburg both seem to have their agendas with their objects. So do I, I guess. I like them all: high, low, used, new, whichever works. I don’t know if the Lamp/Bear has anything more to do with Koons or Oldenburg than all three of us and everyone else have to do with [Marcel] Duchamp’s liberation of the real thing. Before him, it seems objects appeared in, or maybe as, still-lives. Duchamp’s the guy, the legend, who liberated objects from being second-class citizens. Even if his greatness lies in our imagination and how he built himself to make us imagine his work as we imagine it. His objects are often not very satisfying to spend time with outside of the fictions he created for them.”