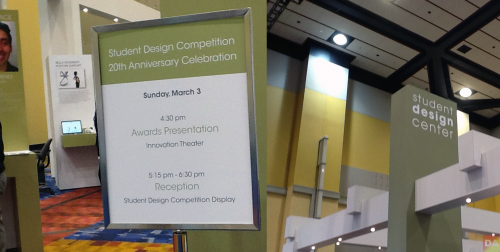 The Student Design Competition turned a proud 20 years-old this March, paying homage to IHA and the 125 winners who launched their careers via this event. IHA said that in 20 years there were over 4,000 entries and 160 industry professional judges. All have contributed with a common goal in mind: to encourage and recognize young designers and raise awareness in the design housewares market of the value of design. Out of the 256 entries received in 2013, six top winners (below) were chosen along with five honorable mentions. BTW, this is Vicki Matranga’s, IHA Design Programs Coordinator, 20th trip to this dance. She founded the competition 20 years ago. 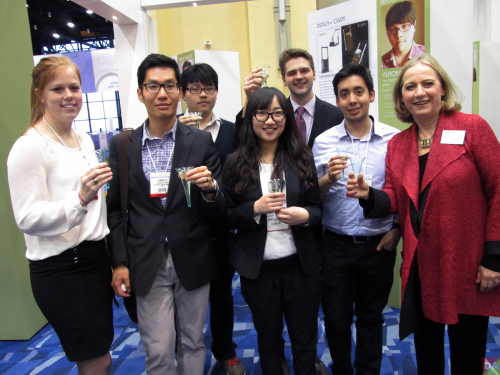 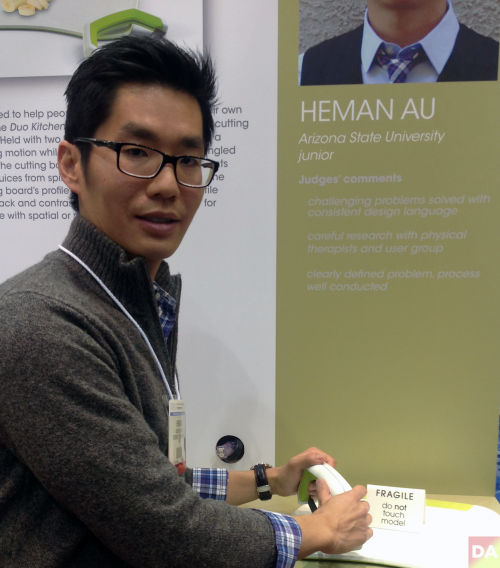 [DesignApplause] I am interested in hearing how you got the inspiration to develop this product, Duo Kitchenware. Can you tell me your name, age, school and major?
[Heman Au] My name is Heman Au, I’m a Junior Industrial Design student at Arizona State University, 31 years-old. The idea came from my aunt who owns a restaurant out in Palo Alto, CA.

[DA] And what’s it called?
[HA] Ada’s Cafe. And the entire restaurant is staffed by people with disabilities. She trains them and staffs them to help them become a productive citizen. So a couple years ago she came to me telling me how the knives that she has at her restaurant don’t really work, and since I’m a design student- you know, help her come up with something that would work for her staff members. At the time, I was only a freshman and I told her, “You know, give me a couple years while I develop my skills as a designer and I’ll come back and help you out.” So, a couple of years passed. I heard about the Housewares competition, so I decided to use this opportunity to design a knife for people with disabilities. And you know, from my research I found out that there’s over 800,000 Americans with one form of disability or another, and also through my research I found that there really is a lack of knives for people with disabilities. There’s a lot of spoons, cups, you know, forks- but no knives to help you cook. So I decided to take the opportunity to design something for kind of more the home use instead of the restaurant use. And that is where the idea came from.

[DA] You said it took 12 weeks to conceive and execute your idea. Four weeks of that was research and testing by two people? Now, going forward, you’re looking for a manufacturer to produce this for you?
[HA] Yes. Mmhmm.

[DA] Are there any designers who really inspire you or that you aspire to be like in your work?
[HA] I really admire Joseph Joseph’s design aesthetic.

[DA] Right. OK. How did you select your materials for it? What is it made out of?
[HA] Actually drawing a blank so…The knife uses a high carbon stainless steel blade, and I picked that not because of its – I mean, it’s durable, but at the same time it has a stark [appearance], so it contrasts with the white cutting board. So it also helps with people who have kind of visual disabilities or spatial disabilities. The handle is just injection molded polypropylene with over-molded TPE, just for comfort. Kind of like the OXO Good Grips. OXO is kind of like another inspiration, just their focus on ergonomics and comfort. And the cutting board is made out of high density polyethylene, just because it’s very durable, but at the same time it won’t damage the blade’s sharpness. So it will keep it sharp longer and it’s great for harsh chemical cleaning or chemicals, it will withstand that. And again you’ll have over-molded TPE for the handle and the back side just for grip.

[DA] What’s the expected lifespan of this product? Did you come up with a way to sharpen this knife yet?
[HA] Yes, so I tested it out. I mean, I didn’t actually test it out, but I tried fitting it with a lot of knife sharpeners out in the market, and it fits in a lot of existing knife sharpeners. So it doesn’t need any special sharpening tool.

[DA] How many times did you actually have to go through the physical process of creating it before you got it right?
[HA] What do you mean?

[DA] Did you know which materials to use right away before you actually created a prototype version or did you have to make a couple of them before you got the right mixture of materials, process, etc?
[HA] Well, the materials are kind of hard because I don’t have a functional prototype to actually see how long the cutting board material lasts. But from the design aspect, just the form and function of it, I went through at least four or five design revisions before kind of settling on what this- what you see in front of you.

[DA]Is there anything else you’d like to say about Duo Kitchenware that you think people should know?
[HA] I actually want to add that besides it being a good tool for people with disabilities, I’ve gotten a lot of feedback telling me that it would be great for kids as well as seniors, who have maybe arthritis or just low strength. And even everyday moms, dads would love to have something like this in their kitchen. You know, that was kind of one of the things that I was trying to keep in mind in my design, was to keep it nice and simple- at the same time, making it look like an everyday, household item. Because obviously people with disabilities, they’re already very self-conscious of their short-comings and they don’t want to use something that’s kind of branded as, you know, of disabled equipment. You know, I’m just pretty excited to see it out in the market, because I think there’s definitely, you know, a group of people that really need something like this. And it would be great for the younger market. I know a lot of times people don’t design for that group, because there’s not a lot of them. You know, it’s better to design for like 7 billion people versus only 700,000 people, but I feel like by making my design more universal to fit, you know, all different sorts of people- it could really help bring it out to market because people want to pick it up. 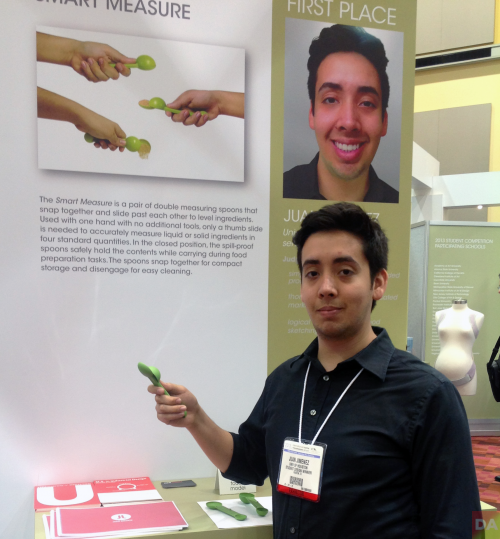 [DesignApplause] Can you tell me your name, age, school, major?
[Juan Jimenez] My name is Juan Himenez, from the University of Houston. I am 23 years-old, and I’m majoring in Industrial Design.

[DA] Can you tell me about the inspiration and thought process that lead to your actual final product, Smart Measure?
[JJ]  Yeah, so the project when we began, it was to design a kitchen utensil. And the way I began to do research was really just to print out a bunch of recipes and follow them to try to use as many utensils as I could. And what I began to do is to take pictures and document the different problems I found with different products and just narrowing it down until- to something that I felt had a good opportunity. So eventually I narrowed it down to measuring spoons. So from there I began to really just think of how can I solve these problems simply? And I basically just started sketching, making models and stuff like that.

[DA] OK, cool. So do you have a lot of personal experience with faulty measuring spoons or ways you can make it easier?
[JJ] Yeah, I really didn’t start cooking that much until I was given this project. But I think in a way that gave me a little bit of an advantage, because I was immediately like, “this isn’t working” or “this doesn’t work.” I wasn’t someone who is more experienced who would probably be like, “oh, that’s just the way it is.” So I think that actually gave me a little bit of an advantage.

[DA] And how did you decide on the material for the measuring spoon?
[JJ] For this material really what I did was- usually the way I go about it is I think: OK, what properties do I need this to have? So it needs to be- it needs to have a certain amount of flexibility, it has to be strong, and it has to be food-grade safe. So with that I just think, OK what other products have these same properties? And then I look at those products and say OK, what are these made of, and then I use that as kind of like a foundation to begin my material research.

[DA] How long did it take you to complete this project, from conception to completion?
[JJ] A year overall to refine the measuring spoons. The project itself took two weeks, but I went through a lot of different versions as the idea remained in my head.

[DA] OK, so now what’s next? You’ve won this award. How are you going to try to take this idea further?
[JJ] Well, the idea is to try to- I’ve taken it as far as I can with my knowledge of manufacturing. So I’m trying to meet other people who can help me develop it further and possibly take it to market.

[DA] So are you going to try to do, like Heman mentioned Kick Starter, or are you looking for manufacturers that are specifically looking to carry this product?
[JJ] Yeah. There’s a few companies that I like that have this similar, I guess, design style that I’m interested in. But it’s also a possibility to do something on my own, like a Kick Starter project or something to have it still be mine [IP] and just take it further.

[DA] Awesome. Have you ever submitted to this design contest before?
[JJ] No, this is the first time.

[DA] Just another question I had was, are there any particular designers or brands that you really admire that influenced, you know, your desire to do this?
[JJ] I’m a really big fan of OXO. I think they have really simple solutions to problems, to everyday kind of things that maybe you wouldn’t think would be a problem. But they’re just simpler ways of doing things, and that’s definitely a big inspiration to me.

Grants to the winners’ schools | Each school receives a $415 grant for each winning entry. 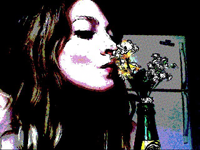