Herman miller teams up with UICA and artprize. 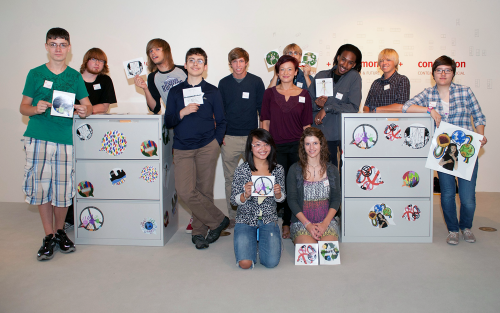 Herman Miller, Inc. collaborated with the Urban Institute for Contemporary Arts (UICA) and ArtPrize to give students opportunity to design art that expressed their own unique perspective. They were invited to address four major topics, including sustainability, cultural diversity, arts and community, and volunteerism. The students worked with an unusual canvas—a set of the company’s Meridian lateral files. The young artist’s designs were then displayed at “The Hub” during ArtPrize, an annual, international art celebration and contest that ran from September 21-October 9, and were ultimately donated to the Grand Rapids Public School (GRPS) District. “People were excited,” said Dave DeBoer, ArtPrize’s Venue Relations Director. “They became a great conversation piece. A lot of people have seen a file cabinet, but it’s different to see one that lives.” The youth were selected from a summer arts program at the UICA. In affiliation with ArtPrize they were tasked with designing a series of bubbles that spoke to a particular topic. After being given two weeks to complete their designs, the young artists were invited to Herman Miller’s Design Yard to take a tour and apply their designs onto several Meridian Lateral Stacking files for display. After seeing the kid’s artwork displayed at The Hub, many came away in awe. “It’s impressive,” said Dr. Bernard Taylor, GRPS’s Superintendent. “Artistic expression comes in so many forms. Kids are sometimes thought of as superficial, but if you give them time and opportunity they will most often thoroughly impress.” The Hub served as ArtPrize’s headquarters and the central location for the international event. A high-traffic area, people used the Hub to vote for their favorite art piece, buy merchandise, get information and support, and see ArtPrize’s 2010 grand prize winner. [ herman miller ] [ a better world ]