designapplause talks to patrizia moroso prior to her special chat women in design: patrizia moroso & patricia uriquiola with spanish architect and designer patricia uriquiola at luminaire’s chicago showroom. moroso is an italian furniture company founded by patrizia moroso’s parents in 1952, and it is still a family company. today the company is headed by the second generation of the moroso family- roberto, the ceo, and patrizia, the art director. patrizia gives us a good glimpse why building close relationships with designers and architects is so important to her.

the story of moroso is about adopting a different approach to the market. it’s a story told by their designs and projects, by people, the protagonists of contemporary living, who tell of their genuine, spontaneous passion for beauty, emotion, design and art.

moroso says what sets her company apart is the amount of time and effort it puts in to make sure the unique character of each designer’s concept is captured in the finished product. “we talk a lot with the designer to try to give identity to the objects,” she explains. “we try to understand what is the personality and the identity of that thing.”

[designapplause] what is the most rewarding aspect of your job? was this realization a surprise?
[patrizia moroso] what i love about my job is the possibility to make things and collaborate with the brightest minds i know. it’s a fantastic opportunity for your life to be enriched by these special people and to realize something with them is simply wonderful. these people bring talent, ideas and like patricia (uriquiola) a friendship.

[da] have you enriched your life by selecting such a high quality of talent?
[pm] ha! yes. you know everyone is influenced by their beginnings, and my beginning was with very special people and different from the mainstream of design. i started working in the family company, an established company (in the 50s) and simply a daughter coming back from the university. but my roots in the family business started early for me, a young child where i spent much of my time playing with fabric and wood as toys. 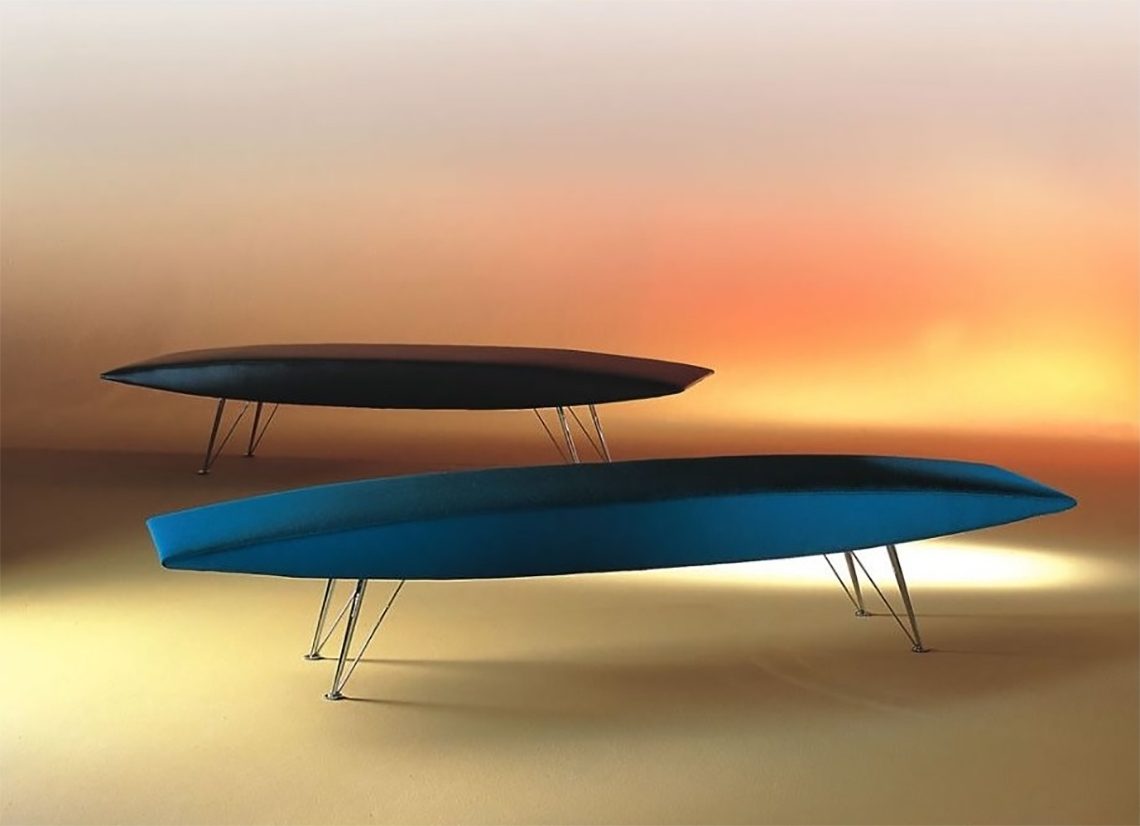 at the university my courses were more creative in nature and i had ideas and my first collaboration was with a friend, massimo losa ghini, who was 22 at the time, but later became a very famous designer in italy and founded a movement called bolidismo and worked with the memphis group with ettore sottsass. soon after was ron arad and then toshiyuki kita. 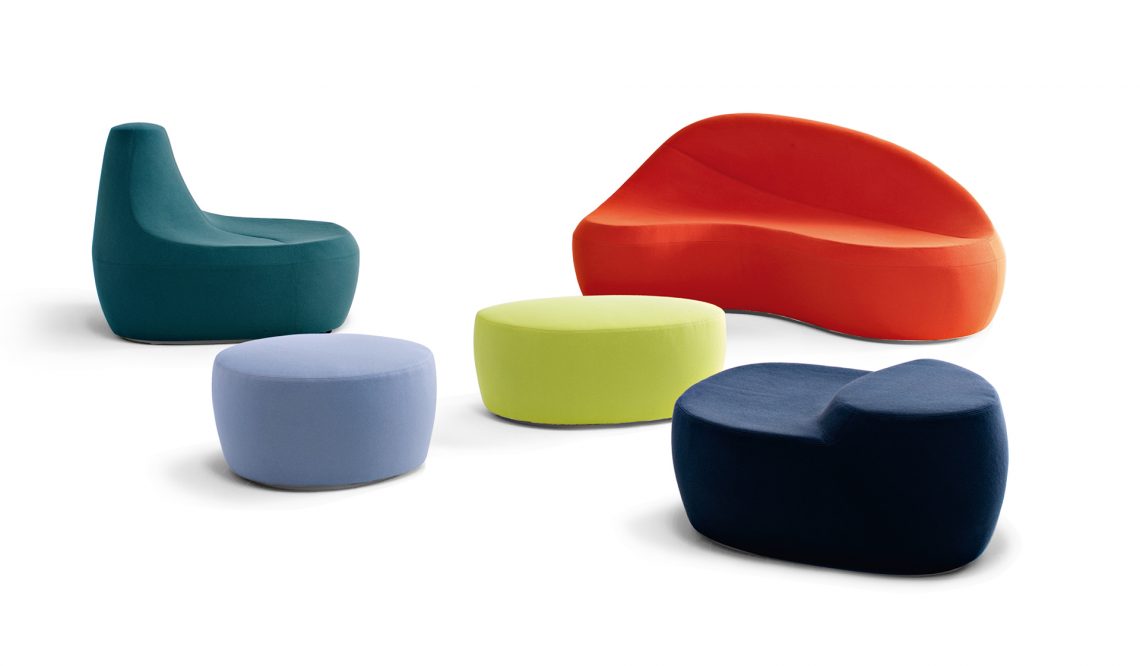 ron was the first to translate an incredibly strong design language and his work was basically art pieces for collectors and museums with the subject of the chair. and with us, it was the first time he created industrial objects and i feel very proud doing that. i was absolutely attracted by his talent and his congeniality. with toshiyuki, coming from japan, for us a completely different world with another kind of concept for the seat- maybe like sitting on a rock in the garden, a fantastic example of organic design. it seems that every designer i’ve made contact with are special talents that greatly influenced me.

[da] do you take risks selecting your talent?
[pm] creating something new is an elemental part of design. it makes no sense to just make another thing like the past. so yes, of course. taking risks is part of our job. and this is also the most exciting part the process.

[da] regarding creative pursuits, can you share what you feel is important?
[pm] the first thing is to know yourself. to have confidence in what you are creating, which is not very easy when you’re young. to also feel and communicate passion. and think about finding a good partner who reinforces your thinking.

if you want to do something and can’t find someone happy to make it for you, just do it yourself. do it yourself first and show that it’s possible. and the technology makes it possible to create your own work. in the end, the (industrial) designer has to have a partner in the industry.

for example, i remember in the 80s when i was crazy about all the young london designers, the manufacturing industries were not there. the then young designers, ron (arad), jasper (morrison) and tom dixon, their studios also had workshops so they could make things to propose to people. tom dixon, after trying many many times became a big success mass producing his own. 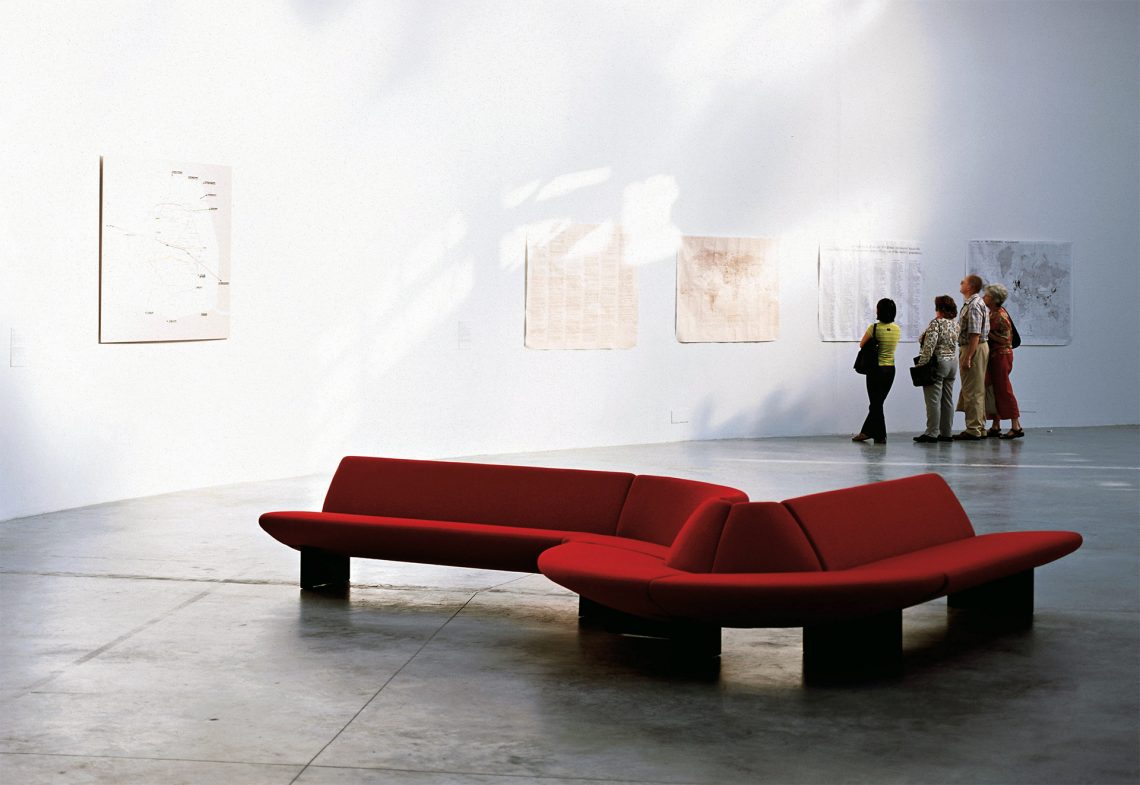 when i first met patricia she presented models of baskets that she interpreted as furniture and she made all these models by hand. you see, when the designer presents more refined examples, more than a sketch or computer prints on paper, there’s a much better understanding of the project and designer. more recently, with front design like ron they also started designing for galleries and collectors and could also make things by themselves.

[da] a personal question about you. what do you feel are your most valuable assets you bring to your life’s passion? what are you blessed with. is it a talent or something learned?
[pm] i don’t know. i hope it is the value in the end of what we produce. it is the result of many good relations. i like to go around and see our work in a beautiful space, perfectly in harmony with the space and showing the value of the design. sometimes i go to a museum and see our work side by side with great pieces and i’m very proud. i also consider the life of a piece, if the work resists the change of time, resists the trends and is bigger than the last trend. of course every object does not have to be a masterpiece but the value a piece brings is very important.

[da] expanding on this question, is there something that people think is important but it’s not all that important?
[pm] ah yes, the ‘aesthetic’ for instance. you know i receive quite a bit of suggestions. most typically the younger talents focus on the aesthetic to try to keep my interest with some ‘ooh wow’ aesthetic attempts. but for me the aesthetic is absolutely the second step behind the concept because the concept is telling me why you did it.

[da] i recently judged a design show and the results were awful. a problem was the judges were given no criteria on what was important. was there innovation, was there a need fulfilled, were others talking about it. with design, after all the above is checked off what is the final criteria? is it good looking, how can a great solution not be beautiful. the aesthetic is pretty important here.
[pm] yes but for me the aesthetic is of course but it’s sort of of course. to understand why first, the concept, and then of course beauty because beauty is part of what we try to produce. and beauty is different for everyone in many different ways and takes a long time to fully appreciate.

[da] tonight you and particia will be chatting at luminaire regarding women in design. in 2009 you said there were many women design critics and journalists but few women designers. do you have a reason why? so today are things better?
[pm] let’s talk about gender differences. yes, there are many journalists and many are women, especially in italy. both genders are equally talented and accomplished it seems and i don’t see any gender difference. in the profession of design however there is some difference.

the people that i work with are all very confident and the dialog is easy and with many friendships. and there’s not a big gender difference regarding communication. but of course i find that the work between genders is usually a little different. the little details seem to be usually more important for women than for men. 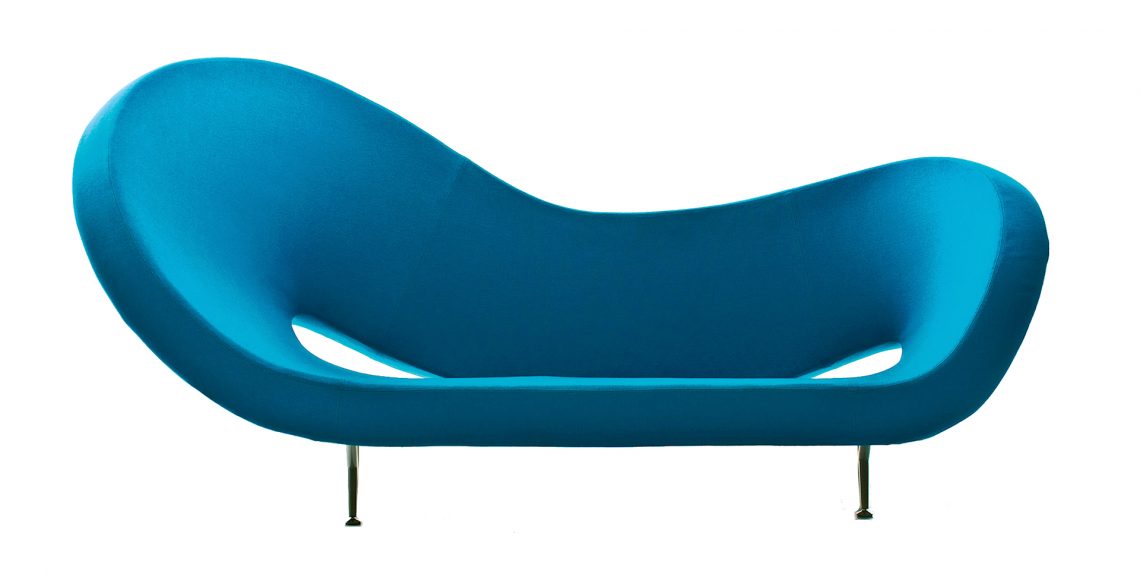 for example, ron arad is really made of iron. his work is sculptural with a very strong gesture and (whoosh) in one second he designs something that has the beauty aesthetic we were just talking about. and he’s connecting this artwork with a craziness for functionality. a chair has to be comfortable and the shape determines comfortability. and if i wish something warmer and softer then metal and we arrive at felt because it’s smooth like metal. his shapes derive from cars, speed and architecture, but he’s not interested in some other the details. 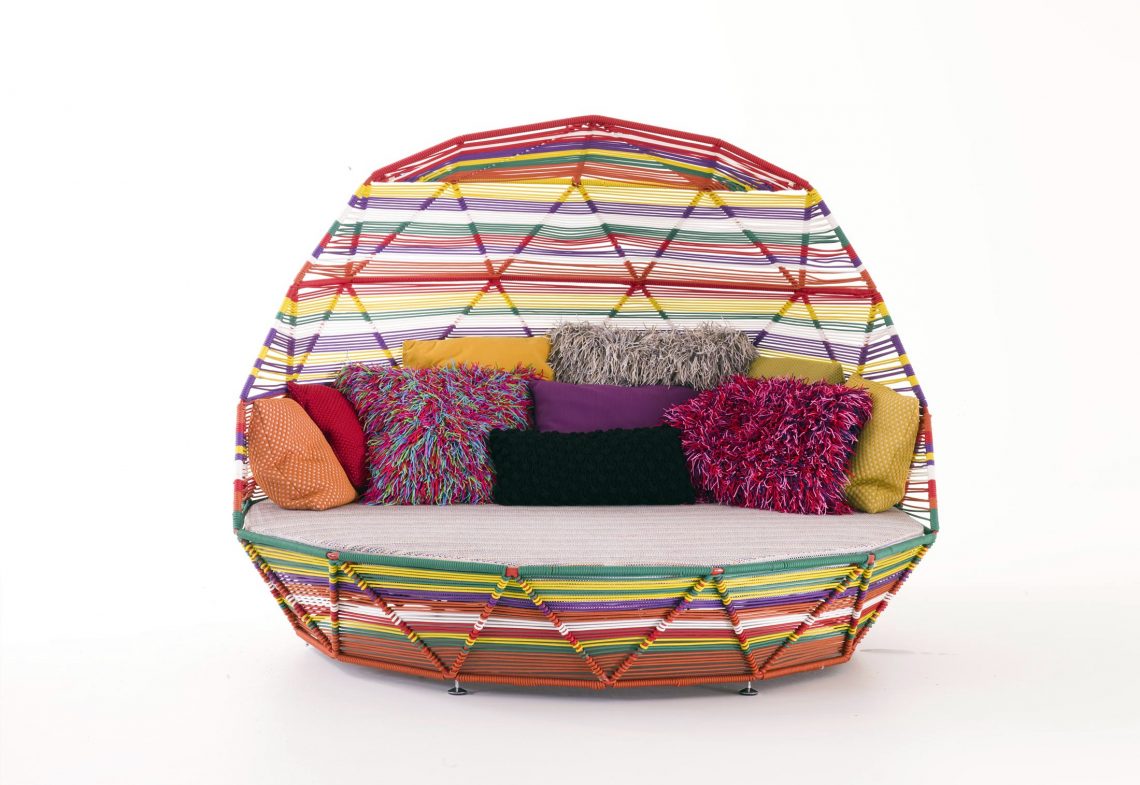 in contrast, patricia’s focus is on the little details. she’s interested in how we do a stitch, how to get a certain effect she wants. she’s not interested in the shape but the very detailed combinations of color and weaving and fabric. we wind up making custom fabrics to satisfy her vision. interestingly, with this kind of detail i find we arrive at a ‘total’ project of fabric determining softness, shape and functionality. 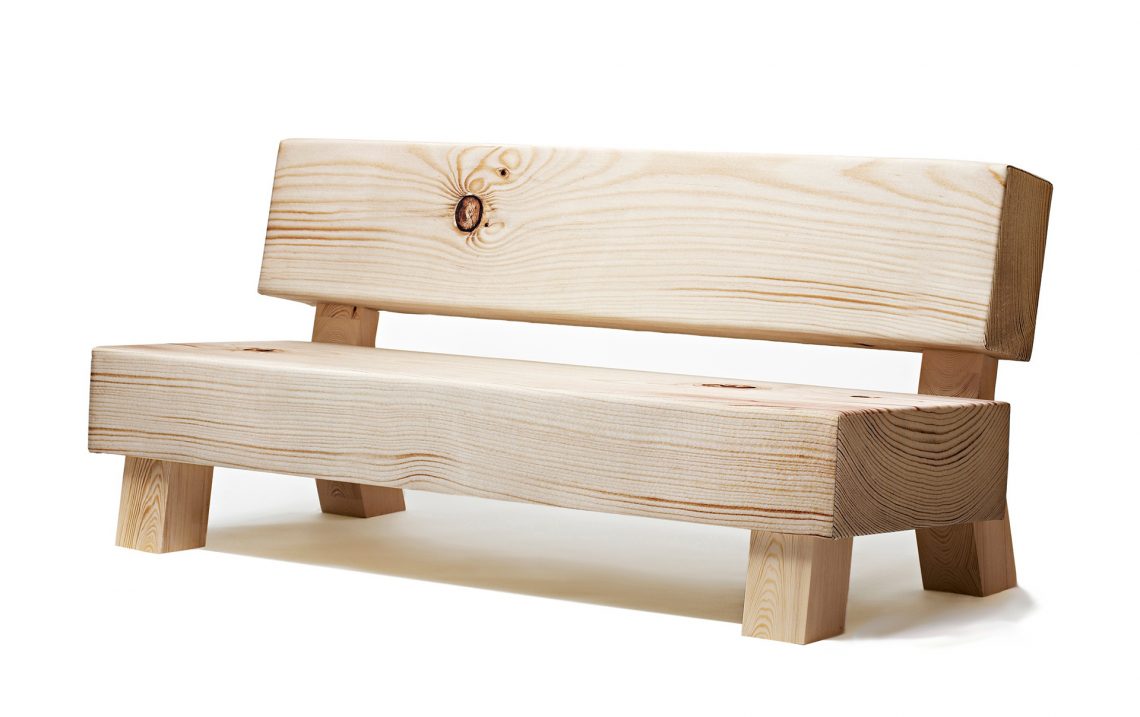 for front design (anna lindgren and sofia lagerkvist) their focus is on illusion, it’s not a function but an idea. for instance their ‘soft wood’ bench concept is a fabric that looks like wood, an illusion that a magician might do. it’s fantastic because of the surprise.

[da] your emphasis on knowing why and your interest in the details reminds me that tomorrow i am spending the last day at neocon seeking out the design award winners. my intention is to ask them why their product won the award. what made it so good.
[pm] ah, to ask the people that won? a good question. let’s hope that they know.

luminaire is more than a furniture showroom. it is an interactive design research center, a playground for the soul, an esplanade for discovery. more than anything else, however, it is a resource focused on creating environments that affect people’s lives.