Toast of the town. Bread-browning limits. 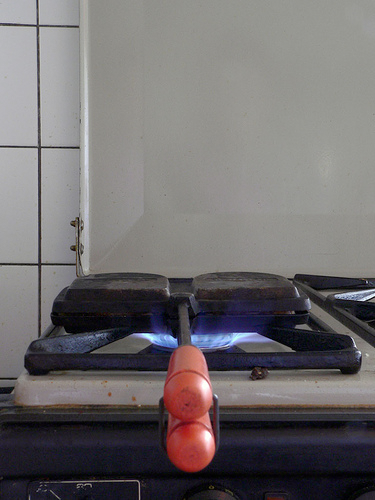 while creating american streamlined design part 2 which featured two toasters, came across the toaster review (below).
our interest is “design / ease of use.” that it’s a five-year-old review (2006) does not diminish its value. note, we don’t endorse this review, we don’t know if it’s any good, although it was in slate magazine. we do endorse if the review gets you thinking, then that’s good.

which leads us to the upcoming 2011 housewares show in chicago in march. looking forward to checking out knives and appliances, especially toasters and espresso machines. also looking for more product reviews.

Toast of the Town
Which appliance delivers the best browned bread?
By Tom BartlettPosted Tuesday, March 28, 2006, at 11:40 AM ET

In 1905, chemist Albert Leroy Marsh invented Nichrome, the heating element that enabled the creation of the electric toaster. Yet, as far as I know, 2005 saw no parades, musical tributes, or star-studded celebrations to commemorate the 100th anniversary of this breakfast-altering achievement. It’s a shame, too, because the toaster has given us so much over the years. And by “so much,” I mean toast.

To correct this egregious oversight, I have taken it upon myself to seek out the best toaster. For the past several weeks, I have pushed eight toasters to the very limits of bread-browning. (I steered clear of toaster ovens and novelty toasters—e.g., those that also cook eggs or hot dogs.) I have crammed oversized bagels into too-narrow slots. I have poured crumbs into the toasters and then tried to clean them. I have gingerly fished out English muffins with a plastic knife. I have cranked up temperature controls to test their limits. I have also overloaded the electrical system in my house and set off the smoke alarm. Twice.

I threw a toaster party as well, inviting over friends and family who, as it turns out, have strong opinions about toasters. People argued. Lines were drawn. Punches were thrown. Not really, but my point stands: Toasters are a more controversial topic than you might imagine.

Toasting quality (10 possible points): A good toaster should brown evenly on both sides. In addition, different slots should not produce different results (unless, of course, they have independent temperature controls). Toasting should be consistent. For instance, if I set the dial on 4, I want the same piece of toast every single time.

Design/Ease of use (10 possible points): Nobody wants a challenge first thing in the morning. It should be possible to operate a toaster without consulting an instruction manual; this will henceforth be known as the “hungover-houseguest rule.” It’s fine to have nifty features (a warming rack or a bagel button, for example), but don’t get too fancy. It’s a toaster—keep it simple.

Cleanup (10 possible points): Very important. A toaster should trap crumbs and make it easy to dispose of them. This is not asking too much.

Value: You can pay several hundred dollars for a toaster, or you can pay 25 bucks. If it’s on the high end, it better make some damn fine toast. To calculate value, I added the scores in the three other categories, multiplied that number by 20, then divided by the price.

Here are the results, from charred to a perfect golden brown: 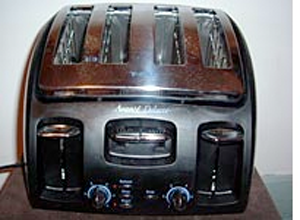 T-Fal Avante Deluxe 4-SliceT-Fal Avanté Deluxe 4-Slice, $60
If you were thinking about designing the world’s worst toaster, don’t bother: Ask T-Fal for the blueprint. There’s plenty to hate about the T-Fal, but nothing is worse than the bread slots. They are at a slight angle. As a result, bread tends to slide toward the front of the toaster, bringing it into contact with the hot metal, burning the bread. It’s also remarkably difficult to retrieve the toast. The crumb trays are terrible; it’s nearly impossible to clean. The layout of the buttons is weird. Plus, why is it so big? It’s enormous! 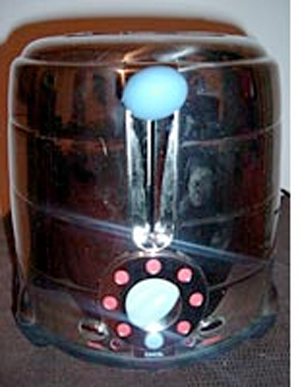 Michael Graves 2-SliceMichael Graves 2-Slice, $34.99
Michael Graves is a famous architect. His toaster? Not so great. While not everyone at my toaster shindig agreed, I think it’s the ugliest of the bunch. The crumb-disposal system isn’t quite as awful as the T-Fal’s, but it’s no joy, either. The lever is tricky to push down and doesn’t always “catch.” But what’s truly outrageous is the temperature control. You can’t read it. Which way is the dial pointing? I can’t tell. Is that a 6 or a 2? I’m not sure. I am sure about this much: I would never buy this toaster. 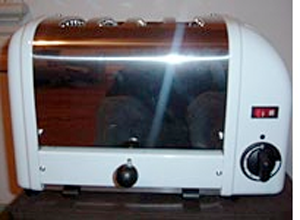 Dualit 4-SliceDualit 4-Slice, $320
Some people swear by the Dualit. They swoon over its sturdy, simple design. They brag that it makes the perfect piece of toast. In an online review, a mother talked about handing it down to her children like a precious heirloom. These people are suckers.

I’m not saying the Dualit doesn’t make good toast. It does. The browning is even and the toasting is consistent. The toast doesn’t “pop up”; instead you use a lever to raise the bread when it’s finished cooking. But the timer sounds like a windup toy. (As my wife put it, “I keep expecting the thing to bark and flip over.”) What’s more, according to the instruction manual, the toaster works best if you “pre-heat” it—meaning that you have to turn it on for a couple of minutes before you make toast. Mock my shameful indolence—I don’t care. Toasters are about convenience, and preheating is inconvenient. My criticisms may not dissuade Dualit devotees, but the toaster is not perfect, and for $320 ($220 for the two-slice), I expect perfection. 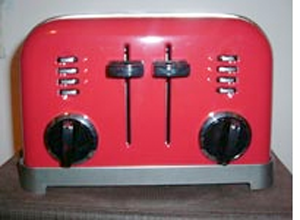 Cuisinart 4-SliceCuisinart 4-Slice, $90.30
This toaster is fine. It has a bagel button, a defrost button, and a reheat button, all of which worked well enough and were clearly marked. My main concern is that different slots toast bread slightly differently even if the settings are the same. This isn’t a deal-breaker, but it is annoying. I’m also not crazy about the antique-radio design. If you like its looks, go for it. You have my somewhat reluctant blessing. 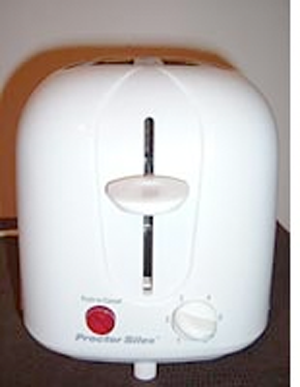 Proctor Silex 2-SliceProctor Silex 2-Slice, $25
The name is ugly and the toaster’s not much prettier. But what the Proctor Silex lacks in curb appeal it more than makes up in price. It held its own against models that cost 10 times as much. It makes a perfectly acceptable piece of toast. The controls are simple to operate and easy to read. It has no fancy features, and the crumb tray doesn’t work very well (to really clean it you need to turn the toaster upside-down and shake it over the sink), but on the upside, it costs $25. You could do better than the Proctor Silex, but you’ll certainly have to pay a lot more. 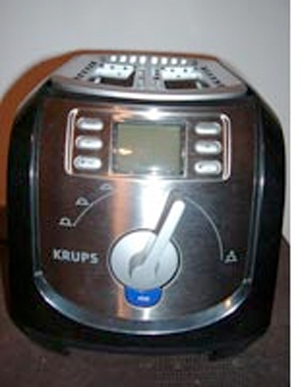 Krups 2-Slice DigitalKrups 2-Slice Digital, $80
I’m very fond of this toaster. Its slots are wide—the widest, in fact, of the models I tested, so getting a bagel in and out of this baby is a dream. Its well-designed lever makes retrieving English muffins a breeze. What I really love is the ingenious, built-in warming rack. The top of the toaster is slightly concave, so that you can rest rolls or sandwiches on it. Hit the warming button, and a couple minutes later your cold leftover is a warm, delicious treat. Brilliant!

As much as I like the Krups, though, it does not pass the crucial hungover-houseguest rule. It’s not nuclear physics, but I did have to consult the manual. As one friend said, “This is the first time I’ve looked at a toaster and not known what to do.” A drawback, to be sure. Still, the Krups is a handsome, thoughtfully designed machine. 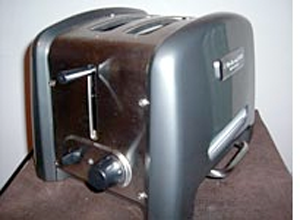 KitchenAid Pro Line 2-SliceKitchenAid Pro Line 2-Slice, $249.95
The Dualit gets all the buzz, but if I’m going to shell out an insane amount of money for a toaster, I’d go with the KitchenAid. Like the Dualit, toast doesn’t pop up—you raise it with a lever that slides smoothly up and down. The idea is that the bread stays warm in the toaster until you’re ready to eat it. The KitchenAid only keeps it warm for about five minutes, so I’m not sure how useful this is, but it’s still a nifty feature.

The KitchenAid is a 10-pound tank of an appliance. It has no special features and no warming rack (though, as with the Dualit, you can buy an optional sandwich cage—a small cage with a handle that allows you to slip an entire sandwich into the toaster). But it consistently makes excellent, evenly browned toast. The stainless-steel crumb tray has a nice, big handle. Overall, it has a smart, pleasing design. A soft blue light tells you it’s working. The numbers are printed on the side of the temperature knob so you don’t have to stoop and squint to read them.

This toaster says you’re serious about toast. It’s a pleasure to use, and it may even be worth the money. Which is saying a lot. 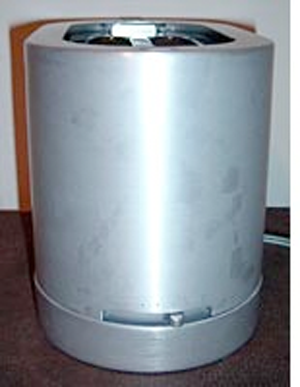 DeLonghi Aluminum 2-SliceDeLonghi Aluminum 2-Slice, $129.99
Meet everyone’s favorite. The DeLonghi elicited actual oohs and ahhs. When you place a piece of bread in the slot, the toaster senses it and the bread automatically descends. When the bread is finished toasting, it rises slowly to the surface. This rising is accompanied by a pleasant “ding!” If your temperature control has already been set, it’s possible to make toast without ever touching the toaster. It’s magic, I tell you.

Everything about this toaster is a delight—especially that it’s delightfully easy to clean. The entire base of the toaster is the crumb tray. When you want to clean it, lift up the top of the toaster, remove the bottom, and dump it out. This is the most elegant solution to the crumb problem I’ve seen.

Simplest to use, easiest to clean, and the best-looking to boot: It’s a toaster trifecta! The DeLonghi is not cheap, but you won’t feel ripped off. 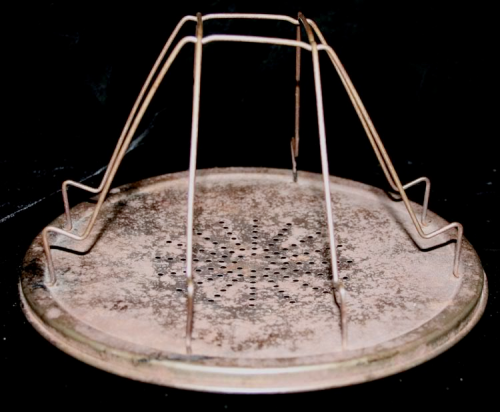