The second annual Expo Chicago, the International Exposition of Contemporary and Modern Art, is dedicated to strong and innovative art and design. This year’s design amplifies Studio Gang Architects (SGA) previous experiments using suspended large-scale sculptural elements to define distinct areas for gathering and relaxing, while simultaneously creating an optical experience of the art and activity that shifts as visitors move through the space. Refining the Expo floor’s organization (a grid cut through by a strong diagonal pathway) will also increase ease of navigation and further enhance the art’s visibility.

In both Expo 12 & 13 SGA incorporates the firm’s collaborative, inquiry-based and research-driven approach presented in 2012 in an exhibition in Modern Wing of the Art Institute of Chicago. “Full-scale mock ups test the capabilities and behavior of materials, as can be seen in the hanging “Rope Rooms” in the exhibit. Investigating and uncovering a material’s properties such as fluidity, viscosity, bending, or stiffness, independent of a particular project, is often beneficial for the work that may come next.” 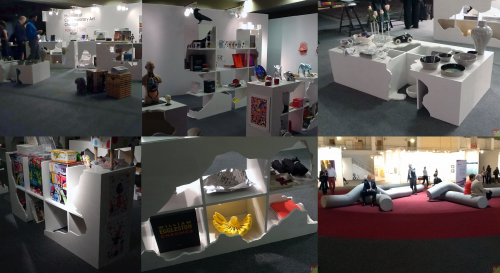 Renowned architecture firm Snarkitecture serves up Cutaway Cabinets, a new series designed by Snarkitecture for MCA Chicago Pop-Up Bookstore at EXPO. Appearing at first as simple white boxes, the cladding of each cut-away in a series of irregular excavations. The openings reveal an internal spine whose surfaces create a range of display and storage options. In addition, Bend, a series of upholstered foam elements provide seating under the main center cone, designed by Snarkitecture in partnership with Volume Gallery, Chicago. Bend debuted at Design Miami 12. 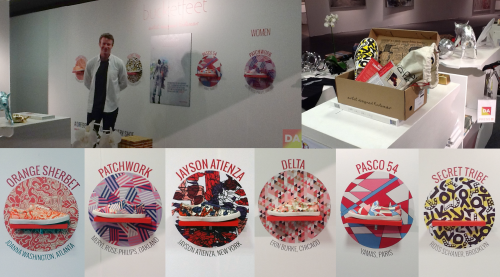 While at MCA’s pop-up we discover ‘artist designed footwear’ Bucketfeet, a globally inspired footwear brand that connects people across the world through art! The two-year-old Chicago-based company has designer Scott Wilson [Minimal] as one of their advisors and was asked by Tony Karman to come to Expo. [ details ]

[DesignApplause] Todd, the concept, how does art and design reside in Bucketfeet?
[Todd Glickman] That’s a very interesting question. On the design side we’ve tried to create a silhouette to where the shoe is functional. If you look inside the shoe it’s all organic soft cotton canvas with a removable latex insole that has bubbles under the ball of the feet. So you’ll like your shoe for the aesthetic and they’ll last a long time and be very comfortable.
[DA] Do you have ‘Secret Tribe’ in a size 13? I’d like to wear them to Vernissage tonight.
[TG] The right question, yes, we do! 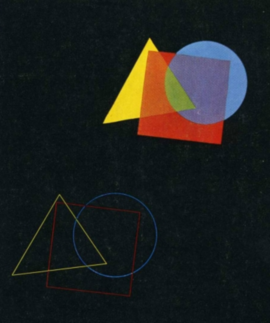 eugin batz | spatial effect of colors and forms, an exercise for color-theory, from a course taught by vasily kandinsky, tempera over pencil on black paper | 1929>30 | bauhaus-archiv berlin

In the art world, DesignApplause attempts ‘objects-only’ which could include a sculpture, or a photograph or painting of an Air Stream trailer for example. However, typically the art conversations are pieces by designers that reside in design galleries. For Expo 2013, for the first time, we put this question to the dealers we talked to: is there any architecture or design inspired art in your booth today? 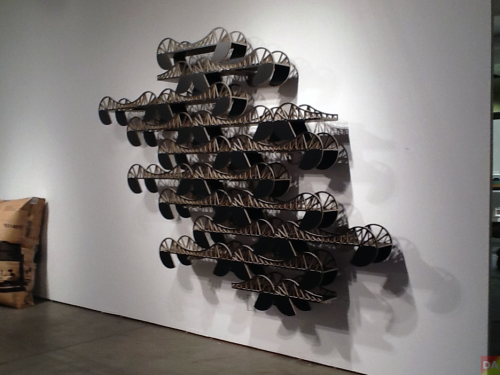 [DA] Alberto, is there any architecture or design inspired art in your booth today?
[Alberto Magnan] Alexandre Arrechea is a Cuban born artist. He works a lot with design and art. This piece is represents Chicago bridges which are all stacked on each other and this is a design project he has going. 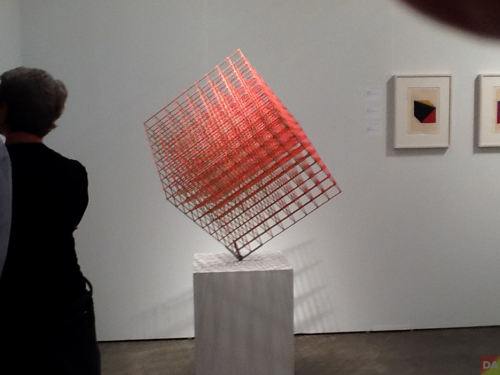 [DA] Cristin, we were talking about the design influence on this artist.
[Cristin Tierney] This is the work of Alois Kronschaeger. He’s based in Brooklyn and originally from Austria. He works in the arenas of fine art that crosses over into design, fashion and architecture. He’s about to have a large scale installation which will be part art and part architecture, 10,000 sq/ft of experiential art, at the Museum of Contemporary Art in Tucson opening October 4. 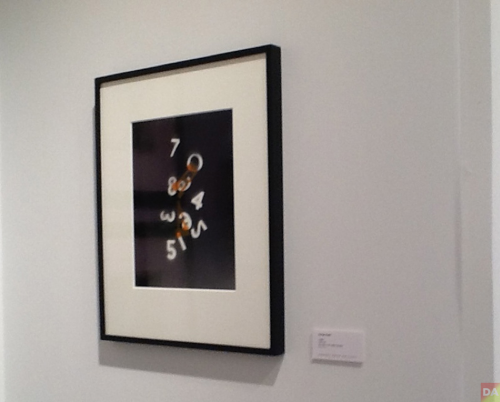 [DA] Ada, do you have design or architecture influenced work displayed today?
[Ada Takahashi] Ron, you are going to like this artist. Gyorgy Kepes taught at the Institute of Design in Chicago. He taught a class on light and design. In this photogram you can see he’s playing with numbers and letters as design elements. Gyorgy was very influential here in Chicago and Moholy Nagy asked him to teach.
[Robert Koch] I’m an architect. 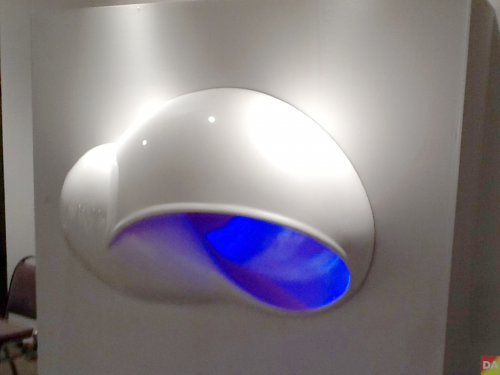 [DA] Sonya, …… ?
[Sonya] Kathy has a pretty diverse background. Her mom was an artist. She was an advertising account executive and morphed into a photo stylist in fashion and home furnishings. She’s now an award winning interior designer. Scenery is fiberglass, video projection and sound, which is about as diverse as her background. 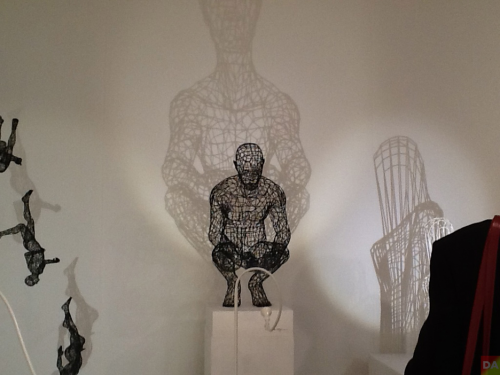 [DesignApplause] Martin, …… ?
[Martin Friedrichs] Moto Waganari is a German architect who’s given name is Lutz Wagner. He works in a CAD program to design these beautiful sculptures. Mostly figure studies but also other things. He then prints them on a 3D printing process. Key essential elements of his work is also the shadows that his works cast. He’s very particular about what source of light is used. 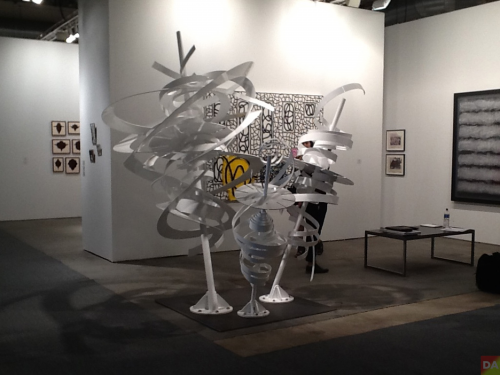 [DA] Gonzalo, …… ?
[Gonzalo Alarcón] Alice Aycock studied architecture but her degrees are in fine art. But you can see the architectural influence , especially in the 70s installations, as many of her works, her elements of minimalism hybrid forms, computer programming, to create a complex combination of architectural and sculptural pieces. this piece represents her current study of energy of the city, a spinning off and colliding of thoughts and ideas. 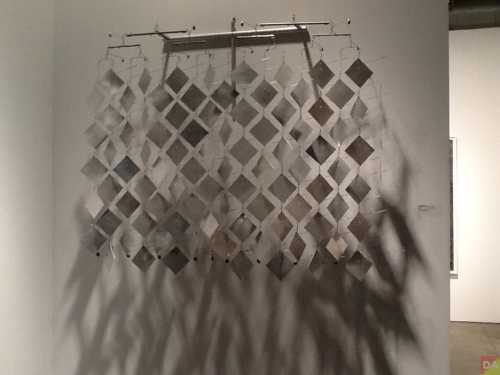 [DA] Charlie, …… ?
[Charles Davidson] We’re looking at a piece of kinetic sculpture by Tim Prentice, a very successful architect but found his true love was really making artwork. Most of his sculpture is to define wind currents. And he designs each piece from the perspective that he thinks about where the piece is located so they really react with the intended space.

[DA] Charlie, I see a pavilion from Tim on the horizon. I’ve talked to 10 galleries already and I am hit and miss on the backgrounds of the art that draws me into the gallery. I was drawn in by this piece that looks like the Foster designed 30 St Mary Axe building in London (2001>2003) and thinking the building inspired this artist. 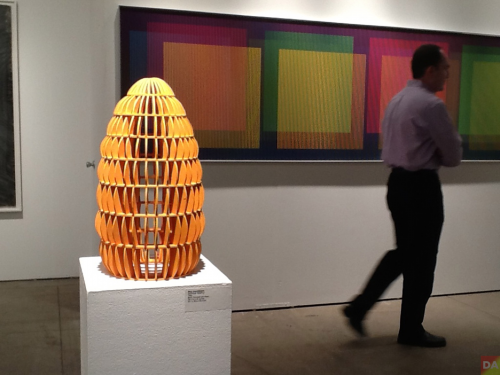 [CD] A debatable assumption. This is a mockette of a larger piece which is on the campus of Lehigh University. This is the wooden study by Mary Ann Unger who died in 1998. A lot of her drawings are very geometrical and architectural. 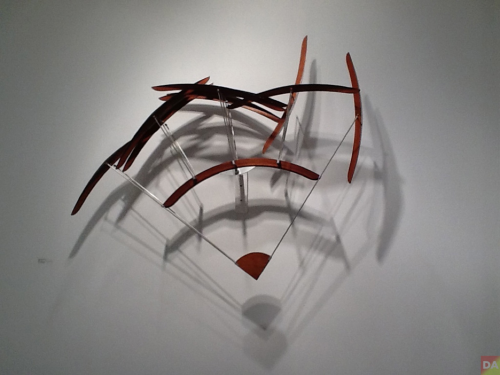 [DA] Back at you Charlie.
[CD] We’re looking at a sculpture by Pedro De Movellan, an American sculpture who does all kinetic work who works in wood, metal and mostly carbon fiber now. His father was an architect and his mother an artist.

Did not find an artist on premise to tell their own story. But did go off-site Friday night to see Herbert Murrie who has a fine art degree and started as an artist then to a very successful graphic design practice for 30-plus years while still painting and now back to painting full-time for five years. 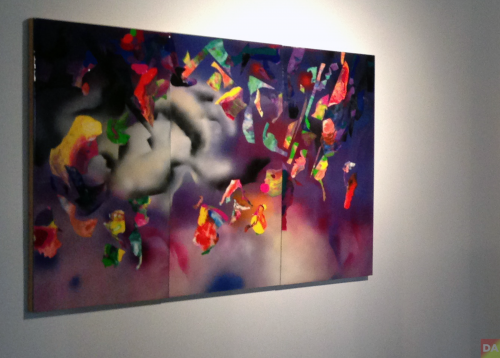 [DA] Herb, does your design training play into your art?
[HM] My process, especially the collage which does not look like collage, is both technical and complex, and there are pieces that have to be designed, constructed. Add ‘chance’ which has two meanings; in English it can mean accident or hazard. In French “avoir de la chance” means to be lucky. I have questioned for a very, very long time if there is a destiny for us or is it completely blind; the push pull between accident, destiny and luck.

Sadly I’ve run out of time. I’ve only asked 12 galleries and found eight hits. What if all 100 were asked? Not to mention IN/SITU and special exhibitions. And the range went from “Jaume Plensa would not liked being lumped in with architects and designers” to Robert Koch saying “I’m an architect.” Here’s what I’m thinking: and it’s not attributed to Yogi Berra or anyone else but me and it makes sense to me. “You can take the this out of that, but you can’t take the that out of this.”

Expo Chicago 2013 is a very tight and fussy show.