Landscape architect Tom Balsley, founding principal of Thomas Balsley Associates (TBA), was honored with an award from the Waterfront Center on Friday afternoon. The award recognizes achievement in waterfront parks design, and was given in honor of Balsley’s new Riverside Park South on Manhattan’s historic Hudson shoreline. 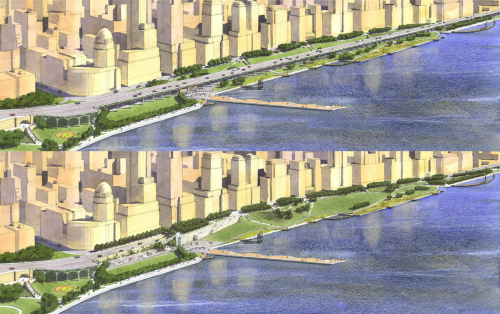 how to be rid of an ugly, noisy, smelly freeway that runs alongside the waterfront? how about bury and place a park over it? hello! 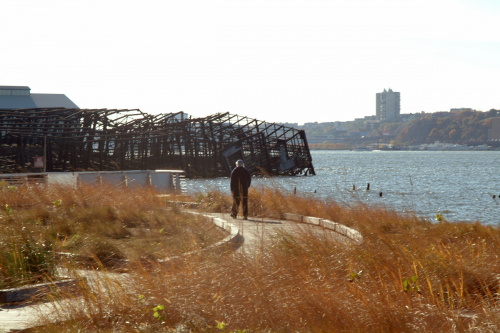 The prize announcement was the second piece of good news for TBA last week, coming just days after Balsley received word that his firm has also been included on a shortlist – along with major international practices like OMA, Zaha Hadid Architects, and Diller Scofidio + Renfro – for the redesign of the public spaces on Chicago’s Navy Pier.

Riverside Park South, which extends a full thirteen-blocks from 59th St. to 72nd, is the final link in a continuous recreational corridor from Battery Park to Harlem. Incorporating walkways, bike lanes, lush lawns, and Balsley’s signature public furniture, the park also preserves still-standing relics of the former industrial waterfront, turning old gantry towers and piers into dramatic sculptural landmarks. Still more exciting is that, when complete, Riverside Park South will run directly over the West Side Highway, whose elevated roadbed will be dismantled in favor of a tunneled route covered by uninterrupted green space, all of it design by Thomas Balsley Associates.

Balsley, who was also honored at the 30th anniversary Waterfront Center Conference for his Top Honor-winning Gantry Plaza State Park of 1999, accepted the award on behalf of his clients and collaborators, including the Riverside South Planning Corporation, Extell Development Company, and the New York City Department of Parks and Recreation.

[ about the waterfront center awards ]
The Waterfront Center, a leading advocate for the preservation and enhancement of America’s waterways, gives its annual Honor Awards to outstanding projects that demonstrate a commitment to the Center’s core principals: quality in design, contribution to civic life, and sensitivity to water itself as a precious natural resource.