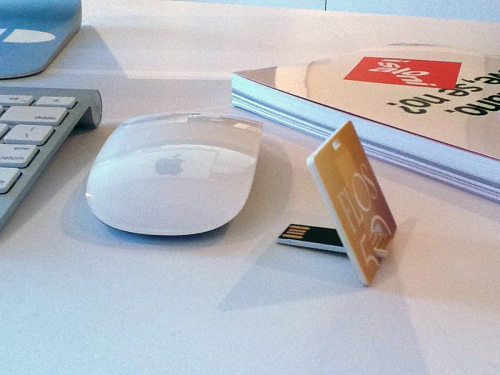 it’s safe to say the press kit without peer this year is flos’s 50th birthday effort. the innovative usb flash drive is also jam-packed with 50 years of information and images. the kit includes historical archives, over 250 images, info on a special ipad app named flos 50, love letters, and much more. happy birthday flos! 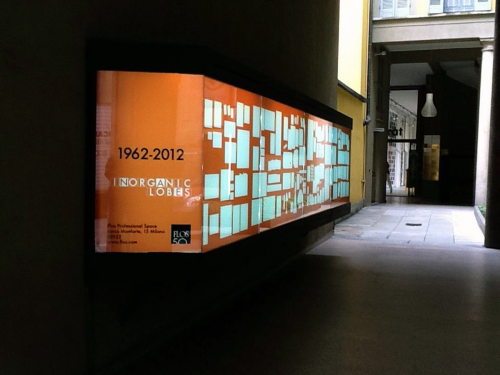 a graphic window display announces a retrospective of 50 years of flos history. this passageway leads to the “professional space” showroom and archive exhibition. 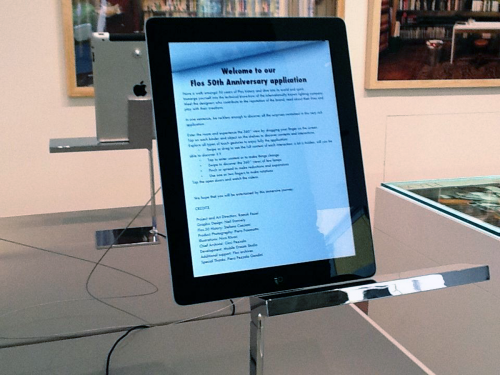 rather than a commerative book it was decided to create an ipad app, flos 50, an exclusive virtual tour of the fifty-year history of flos. 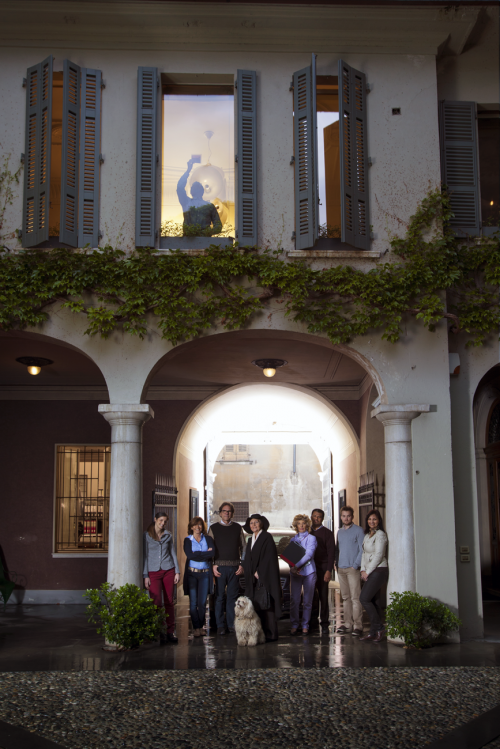 the flos 50 app design team. details at the bottom of this post. 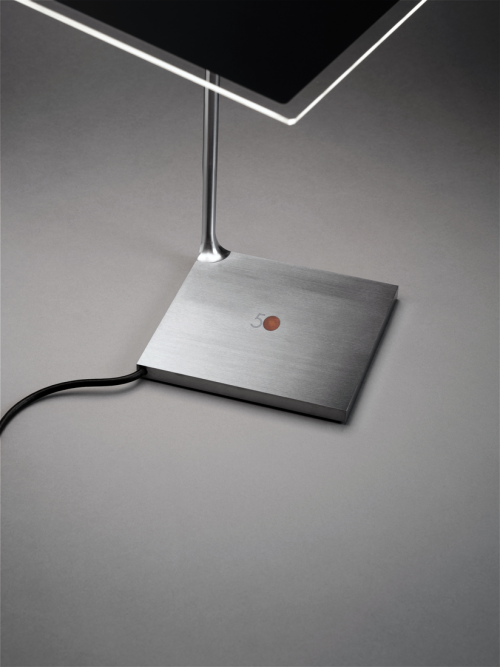 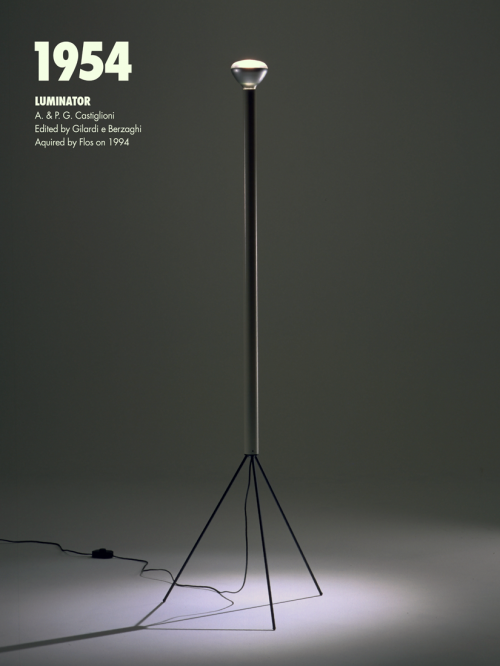 within the press kit are images of 150 products. above> ‘luminator” by achille and pier giacomo castiglioni. 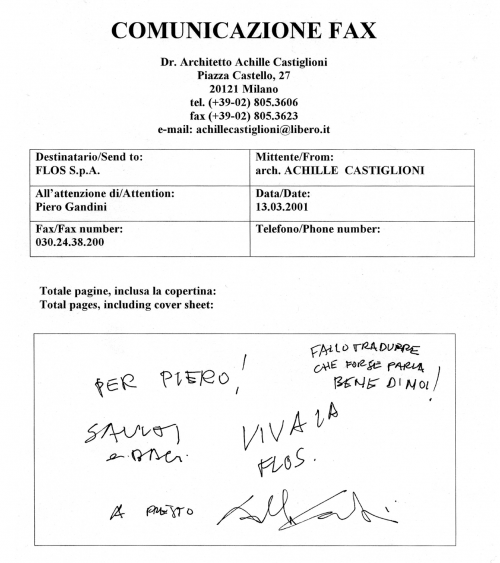 within the press kit are “love letters” from designers. above> achille castiglioni.

[ edited official press release ]
Milan, 18 April 2012 – On the occasion of Salone del Mobile 2012, Piero Gandini, Chairman and Managing Director of international lighting leader FLOS SpA, gets the celebrations under way to mark the company’s fiftieth anniversary, with a special event in Milan and the launch of a remarkable iPad application. Looking ahead to its next fifty years, Flos also announces some important novelties on the technology front with an exclusive agreement to use revolutionary bio-polymers, and the production of a special Limited Edition O-LED lamp.

Established in Merano on 28 September 1962 by far-sighted visionaries Dino Gavina, Arturo Eiseinkeil and Cesare Cassina, in 1964 Flos – which in Latin means ‘flower’ – moved to the Brescia area under the guidance of Sergio Gandini, the ‘illuminated’ entrepreneur who drew on the creative skills of an image committee formed of legendary talents such as Achille and Pier Giacomo Castiglioni, and Tobia Scarpa. So began a remarkable story of passion and devotion to hard work, research and innovation. But first and foremost there has always been, at the centre of the Flos story, deep respect for values like talent, art and culture, all of which can now been looked at in more detail with the help of the Flos Historical Archive, curated by Piera Pezzolo Gandini, Sergio’s wife, Piero’s mother and the worthy winner of a Compasso d’Oro in 2011 for her remarkable career. With the help of a team of professionals and friends, for the last six years Piera Pezzolo has undertaken meticulous research, restoration and classification work to bring together prototypes, designs, original drawings, packaging, graphics, advertising, photographs, film clips, books, catalogues, awards and appearances at trade fairs, exhibitions and museums. The archive takes various forms: multimedia, paper and collections of products and objects.

[ the flos 50 app ] Driven by the desire to grant the public access to this treasure trove of information assembled by his mother, Piero Gandini engaged Ramak Fazel, a photographer and artist of Persian origin, for the creative direction of a tool that could convey not only the sensory appeal of these historical objects, but also the emotions and passions they recalled.

The various “chapters” about the history of the company – more than 40 in all – are represented graphically in the app as archive binders. The first one users encounter is an in-depth social and cultural analysis edited by writer, journalist and historian Stefano Casciani, which covers the period from the years immediately preceding the foundation of the company to the present day. Nineteen binders are devoted to the designers who have worked with the company: Barber & Osgerby, Ronan and Erwan Bouroullec, Achille and Pier Giacomo Castiglioni, Antonio Citterio, Paul Cocksedge, Tim Derhaag, Rodolfo Dordoni, Thierry Dreyfus, Ron Gilad, Konstantin Grcic, Johanna Grawunder, Joris Laarman, Piero Lissoni, Jasper Morrison, Marc Newson, Tobia Scarpa, Philippe Starck, Patricia Urquiola and Marcel Wanders. They each sent Flos a very personal ‘love letter’, which is presented to users in the form of the original document, expressing emotions, memories, gratitude and best wishes for the past fifty years and those to come.

Developed by Mobile Dream Studio in Paris, the application has an innovative interface featuring dynamic images, animations, original video content and surprising interactions. From a 360 degree panoramic view of the archive room – the actual historical archive located in Piera Pezzolo Gandini’s family home in Brescia – users can open two doors to enter the secret, intimate worlds of two key figures in the company’s formation and development: Achille Castiglioni, the designer of more iconic lamps in the Flos catalogue than anyone else and a beacon for the company until his death in 2002, and Philippe Starck, who began working with Flos in 1988, introducing revolutionary concepts to the Italian industrial design. These two legendary figures are celebrated by two specially made videos. The first, by Andrea Caccia, documents a very intimate visit to Achille Castiglioni’s studio in Piazza Castello, Milan. It’s a poetic and nostalgic film, but one which also conjures up the joy and vitality that Castiglioni conveyed naturally by the way he lived. In the second, produced by Urubu Film, Starck and Piero Gandini tour Paris at dawn on a motorcycle, revealing the depth of their mutual esteem and friendship, and talking about light, which for both of them, at an unconscious level, symbolises life.

Other sections in the app include a touching tribute by Piero Gandini to his father Sergio, who continues to be the company’s spiritual guide even after his death in 1999; the graphical history of the Flos logo, from the original design by Heinz Waibl to subsequent versions by Max Huber, Pino Tovaglia and Bruno Le Moult; the Corso Monforte store window in Milan, an impactful brand’s communication machine, with past displays designed by Achille Castiglioni and subsequently by other great collaborators, including Italo Lupi and Bruno Le Moult. Here can be also seen the covers of all the company’s catalogues over the years; financial information and interesting facts and figures from the company’s fifty-year history; and Flos showrooms and single-brand stores throughout the world – represented by a Glo-ball lamp. Also documented here is the lucky encounter with Federico Martinez and Spanish company Antares, leading to the creation of Flos Architectural Lighting.

[ three themes for the future ]
New Tasks – The first task that Flos intends to accomplish is to introduce increasingly environment-friendly industrial production techniques. An important agreement with bio-on to reissue lamps manufactured until now in plastic material, like Miss Sissi by Philippe Starck or Piani by brothers Ronan and Erwan Bouroullec, using the new PHAs bio-polymer, which is 100% naturally biodegradable in water, makes Flos very proud to bring a total revolution in the relationship between mass production and environment.
New Technologies – The perfection of O-LED (Organic Light Emitting Diode) technology, a carbon and hydrogen source formed of ultra-thin sheets which are 100% recyclable like glass, opens up amazing possibilities for transforming light in new ways. Flos sets an example with the Light Photon lamp by Philippe Starck, which is being produced for the company’s anniversary celebrations in a limited edition of 500.
New Talents – Our real future is vested in the next generation, which will produce the new talents of tomorrow. Now more than ever, learning the lessons taught by its past, Flos undertakes to support and encourage the most promising young designers.