The dumpster project: honor thy object. 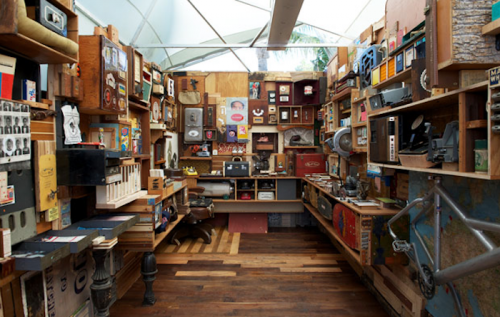 For a blog all about objects, The Dumpster Project is either a dream come true or a total nightmare, depending on whether you’re one of those glass-half-full or hal-empty people. The project began when Mac Premo had to move his life – and all its trappings – into a smaller studio space. He took the essentials, but couldn’t bear to part with all those little extras – the knick-knacks, the ephemera – that we all unwittingly collect and keep around us. “The stuff we keep that appears to have no use, no actual value, that’s the stuff that defines us. Not the actual objects, but the stories behind them,” Primo explained.

So he did what any budding hoarder with serious craftsmanship skills does – he built a shrine to his lifetime collection of cool stuff. The shrine itself is a 30-yard dumpster, every inch of which is collaged with odd bits of furniture, prints, curiosities and sentimental treasures, like his favorite skateboard. From the pictures alone I spy the cross-section of an old, plaster-wrapped cast, a torn yearbook page and a picture of half of Mao’s face. Also hiding out is “half-a-Jesus and a ticket stub from a baseball game that never happened.”

The Dumpster recently made the rounds at the Miami Design District for the Pulse Art Fair. Stay tuned for upcoming tour dates and check out Mac’s blog for a daily post about the objects in his life and the stories behind them. Recent entries include a “bar opium lighter,” a cordless “Sanyo phone” and a torn bag from White’s City in New Mexico, where Mac visited “in 1998. Here is what happened: when this state was formed, this new version of Mexico, some of the white people got a little freaked out and made a city. Go ahead, Google it.” 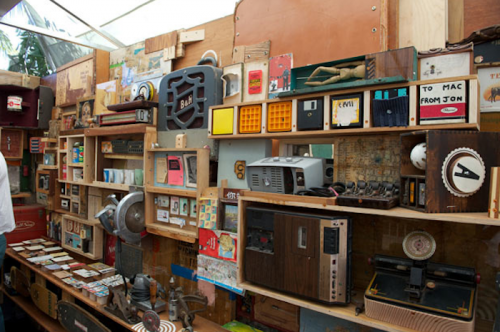 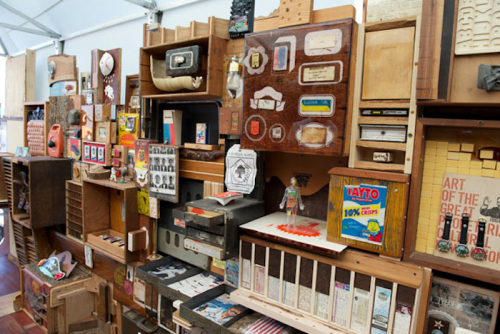