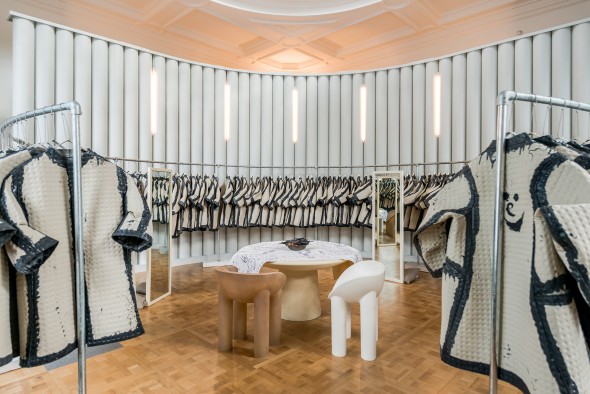 10 custodian-style coats by London-based designer with Kvadrat Faye Toogood invite visitors to delve deeper into the permanent collection of the city’s iconic Victoria and Albert museum.

A visit to a museum usually starts with checking your coat into a cloakroom. At the V&A throughout the London Design Festival, visitors were instead invited to exchange their coat for one of 150 custodian-style compressed-foam Kvadrat coats, designed by Toogood. “Each coat has been hand-painted emphasising the seam, the pattern and the pattern cutting,” said Toogood who launched her first fashion collection with pattern-cutter sister Erica two years ago. “But we’re not asking everyone to look the exactly same, because on the backs of the coats are faces, so you can pick your little face.” 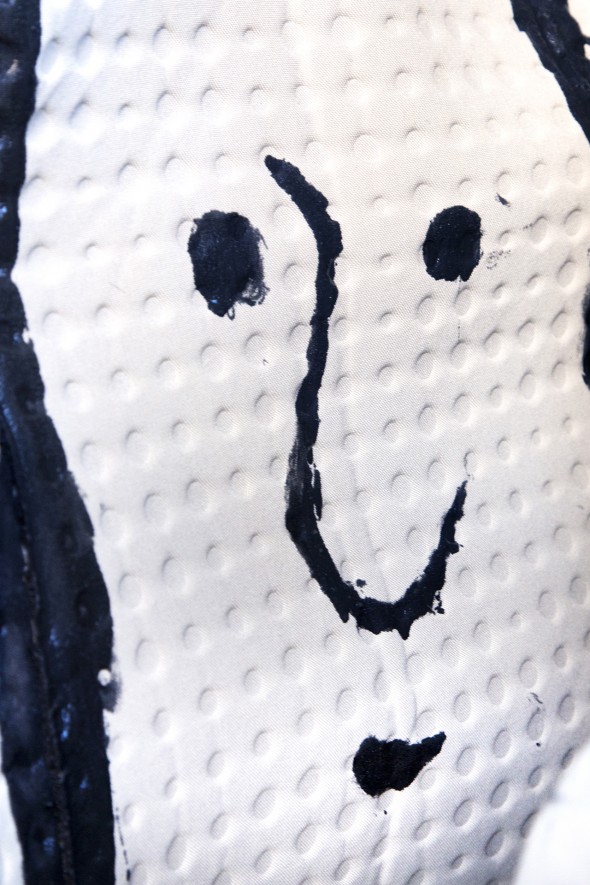 Hand-illustrated maps sewn into the pocket of each coat led visitors to 10 different “coats” – specially commissioned sculptures that responded to specific items or spaces within the museum. “One of the main ambitions of the project was to get people to go to parts of the museum they might not normally go to – not just to put a piece within a space, but to really engage with the exhibitions,” said Toogood. 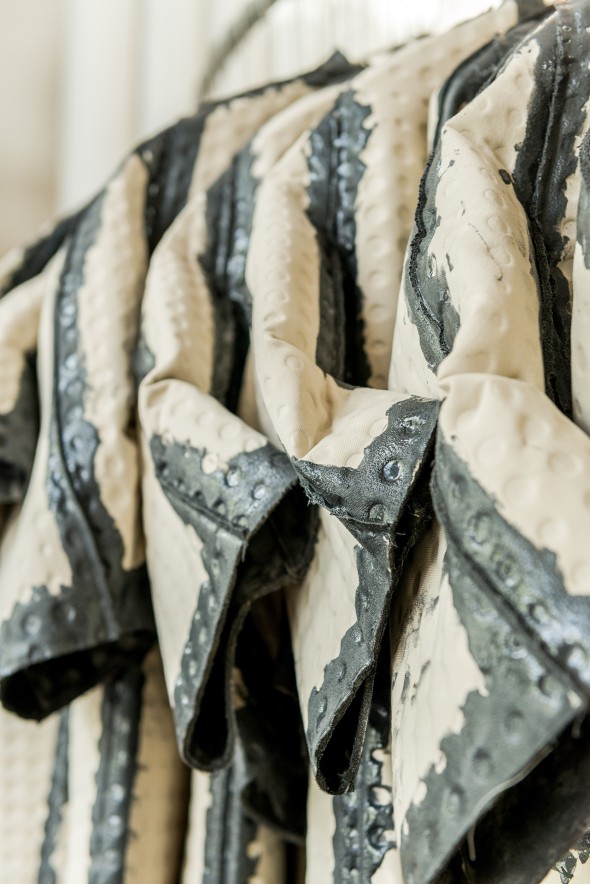 All created by British fabricators, artisans and manufacturers, and named after the trade they reflect, the coats are made from unexpected materials from studded industrial rubber to intricately carved wood. 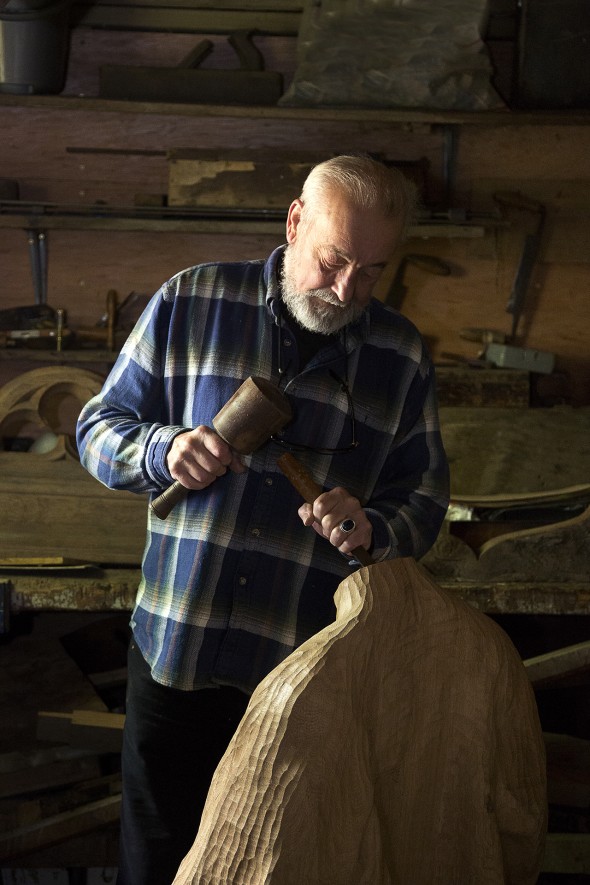 The Wood Carver (above) was hand-formed from European Oak by Stuart Interiors in response to the strapwork ornamentation of the 16th-century Old Palace in Wax Gallery 58, where this sculpture could be found. Scaled-up markings of the original clay maquette can be seen in the finished form, leaving a legacy of the design and making process. 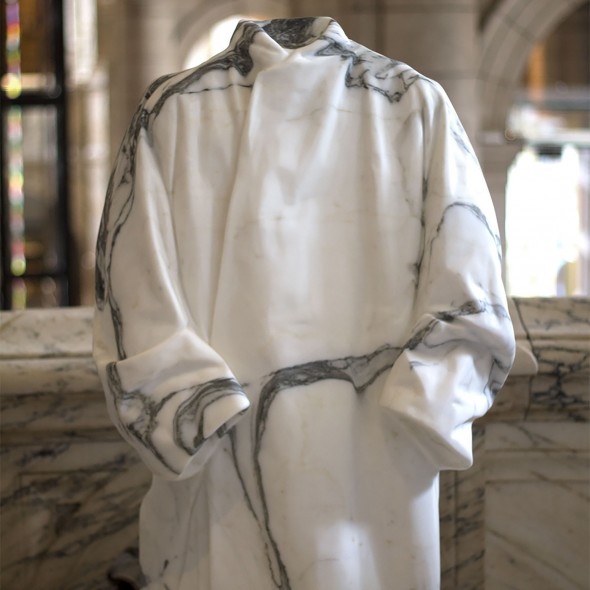 Overlooking the veined marble “Staircase A,” outside the Arebascato Marble Gallery 58, The Stone Mason (above) made by Lapicida features flowing fabric forms dictated by the digital scanning process on the front and precise machine-cut incisions on the back. 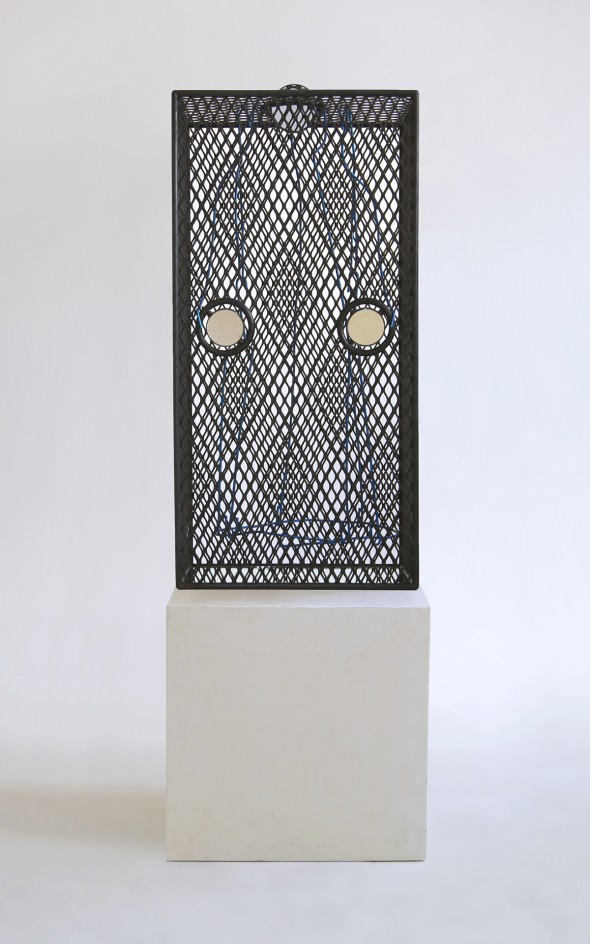 The Welder (above), formed by Newcastle-based Novocastrian, comprises a blue aluminum rod outline of coat encased in a blackened mild-steel mesh box, complementing the 1990s steelwork of the Wendy Ramshaw screen displayed nearby. Pivoting discs of mirrored glass at its collar and cuffs encourage a moment of literal and metaphorical reflection. 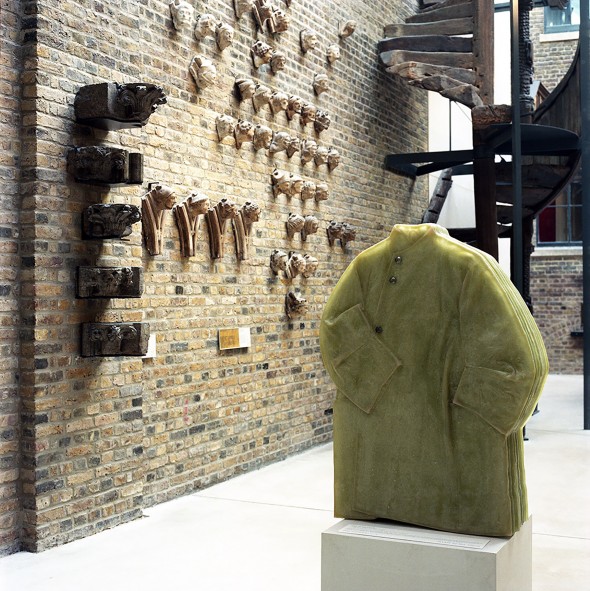 Inspired by the Victorian casts of Salisbury Cathedral’s medieval stonework displayed in nearby Gallery 64b, and created by fiberglass First, The Sculptor (above) comprises ten layers of flat coat-shaped fiberglass in varying tones, bound together with galvanized steel bolts standing in for the coat’s buttons. 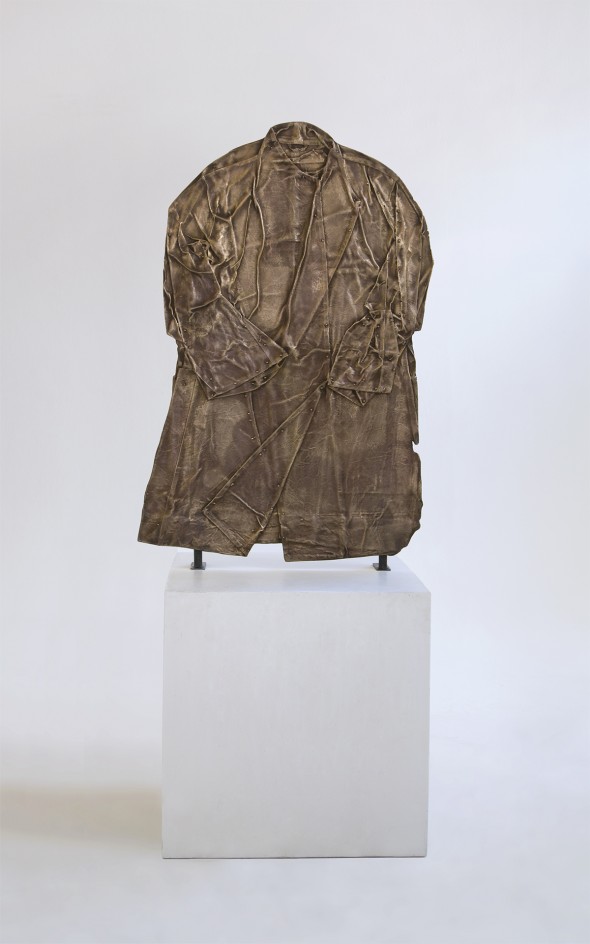 The Astronomer (above) resembles a flattened and creased leather coat, but on closer inspection it is in fact cast from patinated bronze, the reverse side revealing its supporting structure and cerulean blue hue inspired by the trompe-l’oeil mastery of Alessandro Pampurino’s Renaissance ceiling grisaille in Gallery 64a. 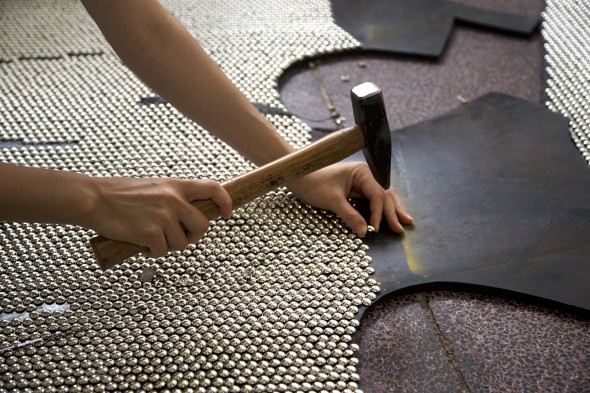 In Gallery 62, The Blacksmith (above) is a heavy-duty industrial rubber coat pierced with hundreds of steal studs and mirrored screw-enclosures to create the aesthetic of an armored hide harking back to the specialized apparel of 16th-century tournaments and battlegrounds. 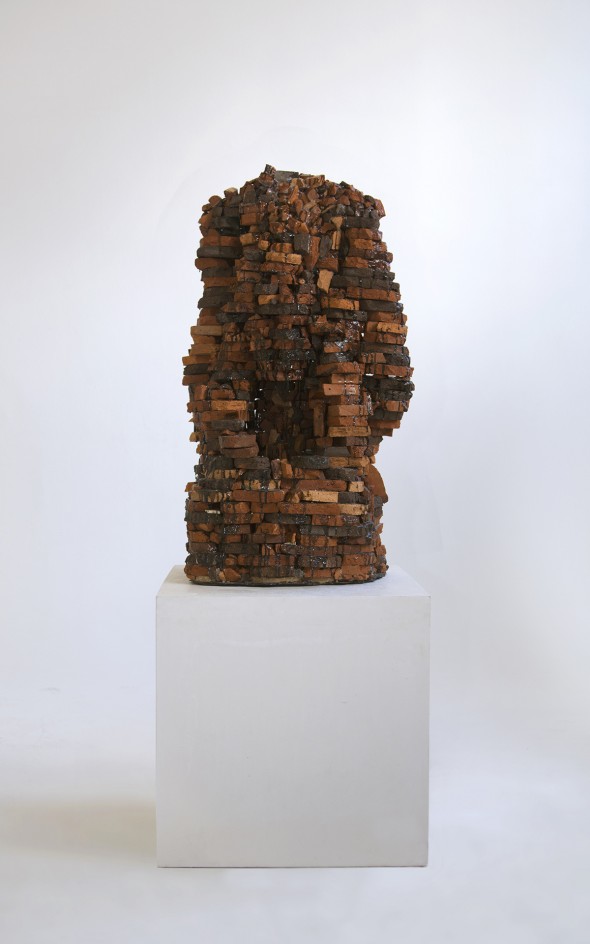 The Tiler (above) in Gallery 143 is made from loosely piled terracotta pottery shards arranged to approximate the form of a coat, with viscous drips of tinted resin oozing down its sides. Its jagged outline references both the heritage of the ceramics industry and pixelated images of the digital era. This sculpture was made by Natural Stone Projects. 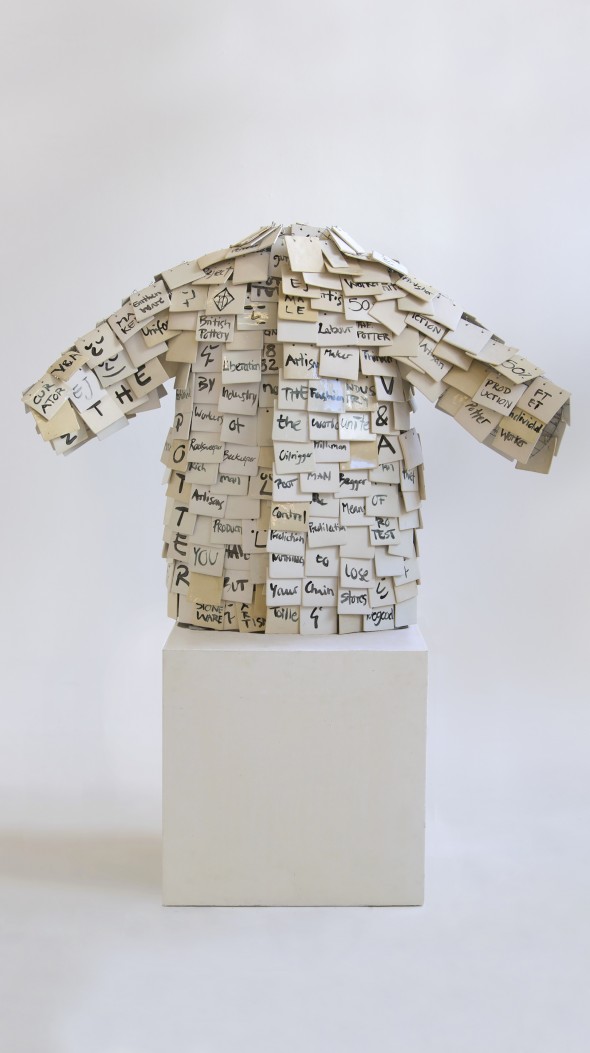 Resembling a coat covered in white post-it notes, The Potter (above) was made by 1882 Ltd from fragments of glazed stoneware and earthenware, which have been annotated with words and phrases from the Toogood manifesto, which includes calls to arms like “We hereby reject and reprehend the cruel diktats of the discredited fashionista treadmill,” “We shall… clear the way for a new aesthetic rooted in individuality and honesty,” and “We celebrate the craft and the toil of the workers.” 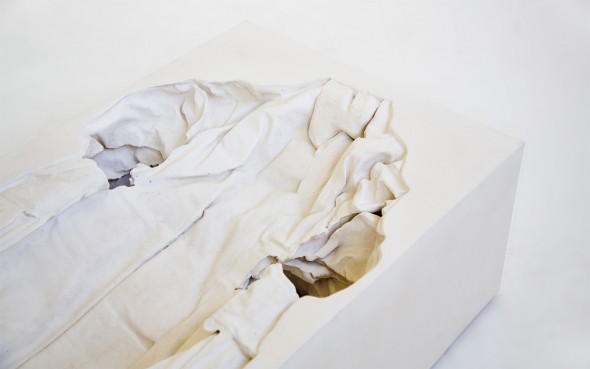 The Plasterer (above) is more the absence of a coat than a coat. A block of plaster lies on the floor of Gallery 54, with a counter-relief of a coat carved out of its middle. The piece, made by London Mould Makers, was inspired by the 18th-century fashion for intricate plasterwork mouldings – as mastered by the architect James Gibbs – and seen on the ceiling this room, making the coat a reflection of what’s above. 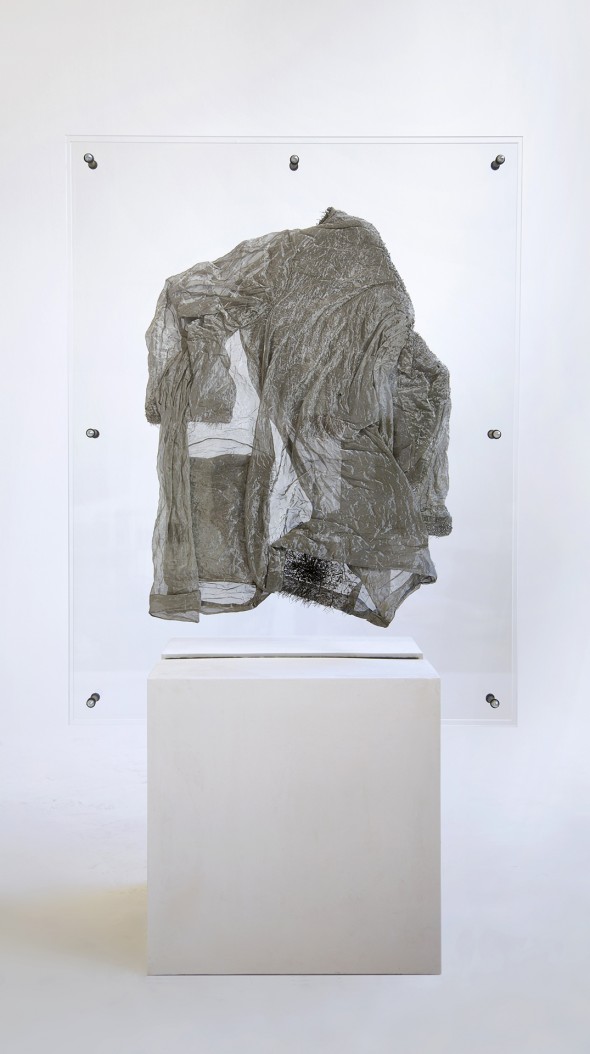 Finally, a bedroom-hanging from Stoke Edith House in Gallery 54 provided inspiration for The Embroiderer (above). Woven from steel wool mesh, the coat merges the results of fine needlework with the tools used in its creation – thousands of stainless steel pins have been stitched into its fabric. 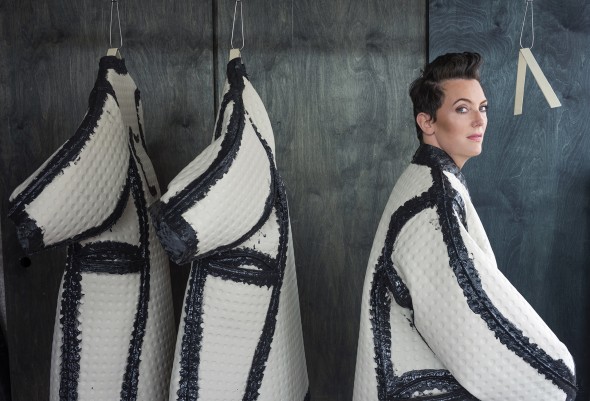 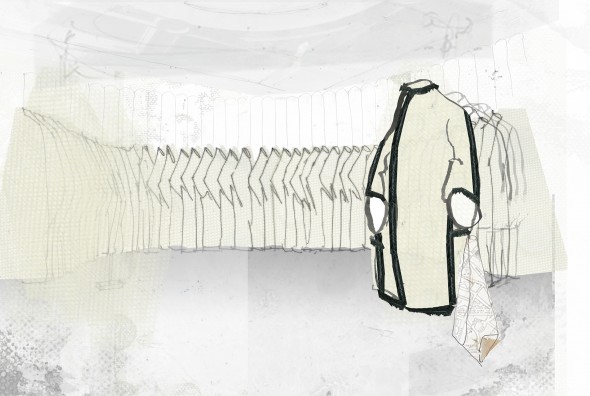 above / below >the cloakroom concept sketches 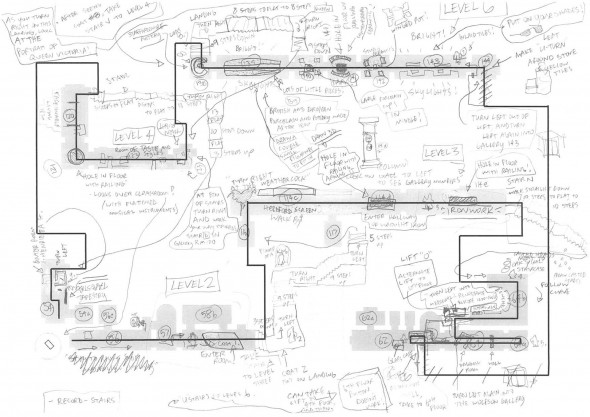 The Cloakroom by Faye Toogood at the V&A museum 19 – 27 September 2015 to coincide with the London Design Festival.