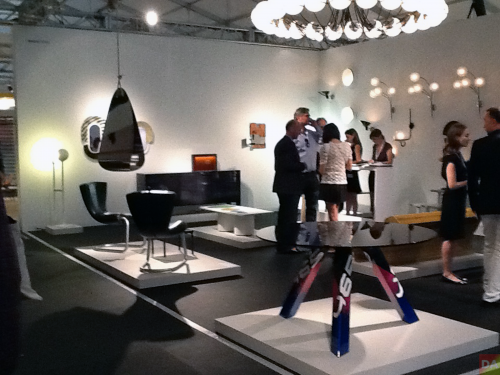 [DesignApplause] We talked with Didier Krzentowski of Galerie Kreo in 2012 and 2013. But we never published 2012. The following is 2012 and Didier is going to start with where it all began.
[Didier Krzentowsk] OK, so like 15 years ago, I find out that in fact, if you speak about design and furniture design, or industrial design, we are living in a world where we remix everything, not much is really new. Even if you take the cars, you see fantastic design that happened between the ’50s and the ’70s. If you take the watches, it’s about the same. But after that, if you take into account much of the industrial design, even though technologically things get better and better, much of the design is a remix, a re-hash.

So I got the idea, at this time to have a gallery, one that could be like a collaboratory with the designers, where we could think about ‘new’ designs, plus thinking this new design could afterwards go to market. I never speak about decoration but more functional design. And all of the designers we work with like Konstantin Grcic, the Bourroullec’s, Pierre Charpin, or Martin Szekely or Hella Jongerius are also all thinking first in their head about industrial design with products going to market. And the gallerie concept in a good way allows them to pre-think, as you were, their designs and maybe helps them to build what they want the design to be in the future. 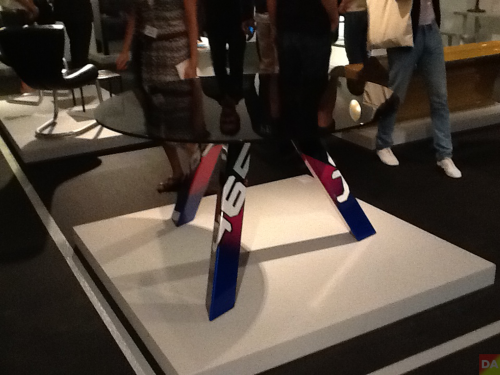 For example we are in the DesignMiami art fair, and here’s a table (465 from ‘champion collection’ that consisted of eight tables) by Konstantin Grcic. You see on the feet of the table you have decorative symbols which are unique to the table, and in fact, it is ideal to say, now everything is branded because of those symbols. And then a new idea arises that the next generation tables will be come in an assortment of colors. Each time the designer has an opportunity to see their effort, there are new ideas.

In fact, the very idea of the gallery is to be a platform where the designer, the collector, the visitor can speak of design in the future. That’s 90% of the work of the gallery. The rest of the work is aimed at collecting. I’m kind of a furniture collector. And for 30 years I’m collecting lamps. There is a book by jrp|ringier called The Complete Designers’ Light (1950-1990) where I was showing like 800 lamps from the ’50s to the ’90s. And this book lists all the lamps with the designers I work with. And in fact, the book was just to show that we invent and when people invent.

[DA] What did you do prior to 15 years ago? Were you just collecting or did you have a gallery?
[DK] I was a collector, an avid collector of art and furniture design. And when we sold the company I was working with, I thought that my next edition would be to do something I like and what I like was art and design. And before I opened the gallery, I was thinking about industrial design but the financial side of it. That perspective came when I was working in the sports industry, I was working with Jean Claude Killy, the skier, and I saw all these sports guys had agents and Killy signed on with Mark McCormack who headed IMG (International Management Group).

And I thought why can’t we bring these designers who also work in a huge industry and bring them together to think about new products. And the company was called Kreo. And in fact, everyone was quite happy with all the products that were introduced. There may be 30 million pieces in the world now. And at this time we work with Marc Newson, the Bourellacs’, with all of them. But we couldn’t succeed, because people were not in the mood to wait and they wanted the product right away. But some were ok with a copy of the product, which we can now call a limited edition of the product.

[DA] How, how do you collaborate with your designers? How do you commission them? What determines what you carry?
[DK] We are like partners. Well no, in fact, we are the first to work the way of the art industry, that means we are not exactly partners but instead we split the production and we split the margin that we earn. And this was different from everybody else. So maybe it’s for this reason, for 15 years or 14 years (Galerie Kreo opened in 1999), we continue to work with all these designers. And if you take people like Konstantin Grcic, like the Bourellacs, like Charpin, they have one gallery in the world, and we are that gallery.

[DA] When they have an idea do they approach you? Is that how that works?
[DK] Yes and no but whenever they do approach us and we begin to speak together, it can be really very long. Jasper Morrison, we had to wait five years to do an exhibition, but we have made two in a row.

strong>[DA] And what of the other way around? You have an idea and you want something to happen?
[DK] No. In fact, I never have an idea because I’m not a designer. So in fact, they work on research and when they ready they come to me. Though, if we have a group show, it can come from me. I will finish with a fantastic show, but with only three answers. The question with the missing object. (both laugh.)

strong>[DA] Do you want to say anything about Design Miami?
[DK] Of course, I’m very happy about Design Miami. Why? Because, in fact, you know, we went to see Craig Robins a long time ago to say a lot of art collectors collect our furniture, and we wanted to begin something with them. And we began the fair with them. So when we saw the success of Basel, Art Basel and Design Miami, we were really happy.

strong>[DA] You’re on the vetting committee to determine who’s going to be here. Obviously, since day one, right?
[DK] Exactly.

strong>[DA] Do you have to turn any away?
[DK] Sometimes we turn away. Sometimes we say people be careful, because you are showing the same thing, you know just like a vetting committee.

[DA] There are 36 galleries this year, so congratulations are in order. Is there anything you want to say about the business aspect in general?
[DK] Thank you. I’m really happy because in fact, we see that more and more people beginning to look at the furniture designer, and that’s great. 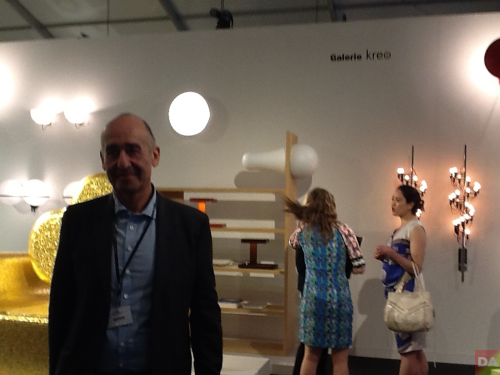 [DesignApplause] Back at it with Didier in 2013. What’s happened this past year?
[DK] I think people are more and more involved in design and look intently at furniture, especially at Design Miami/. They are also more interested in content and the story of the designer’s who are making the pieces.

[DA] Do you have an opinion on why this is happening?
[DK] I am not sure why. We have definitely seen a rise in the interest for design; you now have major Art Museums organizing very important design shows. Such as the Marc Newson exhibit currently on at the Philadelphia Museum of Art. Design is at the forefront of contemporary creation, and has managed to capture a younger audience, as well as the more established collectors.

[DA] The designer’s that you’re representing are also very strong production designers.
[DK] Absolutely. The designers we represent, also work with the best industrial companies such as Flos, Vitra, Alessi…At the gallery we act like a research laboratory for them, meaning they have total freedom to create. 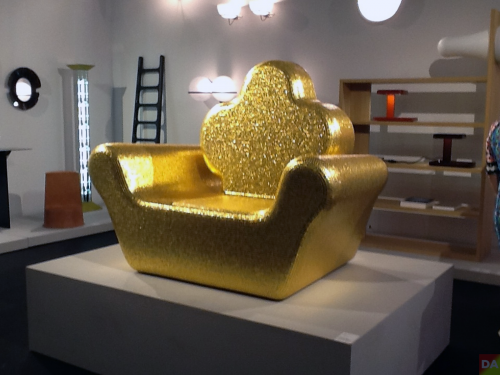 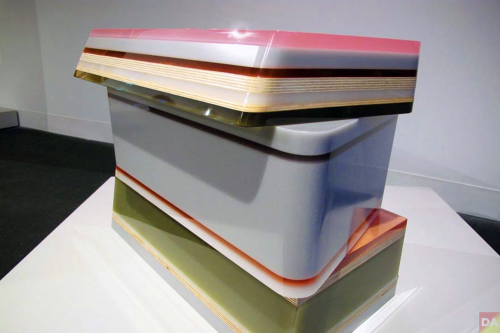 [DA] We were in Chicago at Art Expo this past September. Tony Kalman had a great show. Do you think design galleries would come and be well received in Chicago?
[DK] Of course. Chicago is a very important place in Art and Design.

[DA] At Art Expo, at some point after going from booth to booth the idea of are there any architects or designers hanging in the booths. I only asked a few booths and maybe sorry this idea didn’t come sooner. But out of 12 galleries asked, eight had designers or architects in Art Expo. One was Gyorgy Kepes who taught at the Institute of Design in Chicago. He taught a class on light and design. Gyorgy was very influential in Chicago and Moholy Nagy asked him to teach. Another Alexandre Arrechea, a Cuban born artist. His sculpture represented Chicago bridges which are all stacked. Even a gallery owner, Robert Koch, is an architect.
[DK] Interesting. To be an artist you are free if you wish to go into any field. For an architect or designer that may be a bit more complicated in it’s constraints.

[DA] Let’s flip it around. Are any of your designers here pursuing art that you know of?
[DK] No, they are all in design. Now fashion, if you think of Dior he’s a fashion designer but he’s also an artist with a big ‘A’. But the designers in our galerie are just thinking about design. 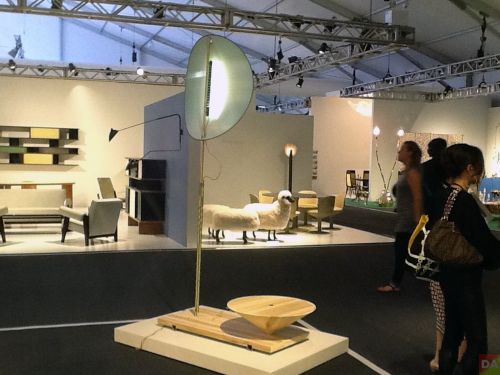 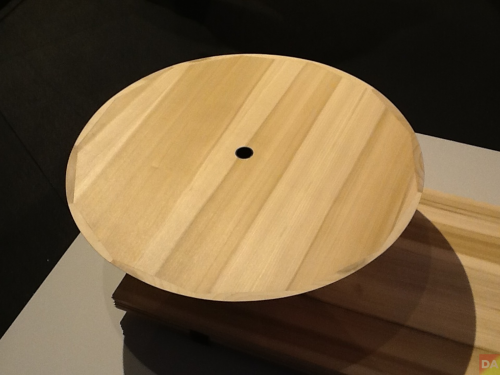 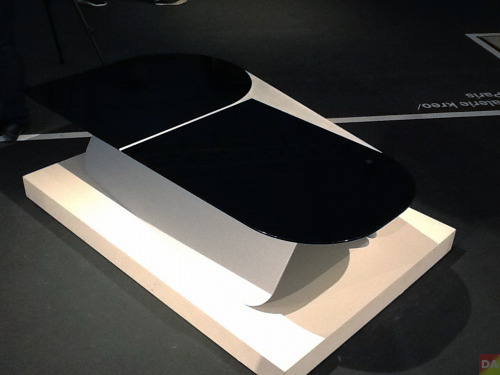 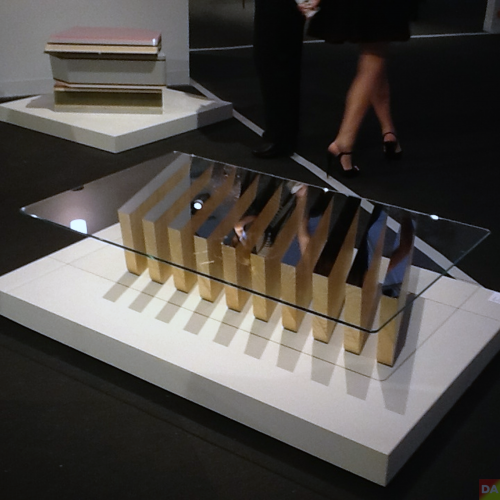 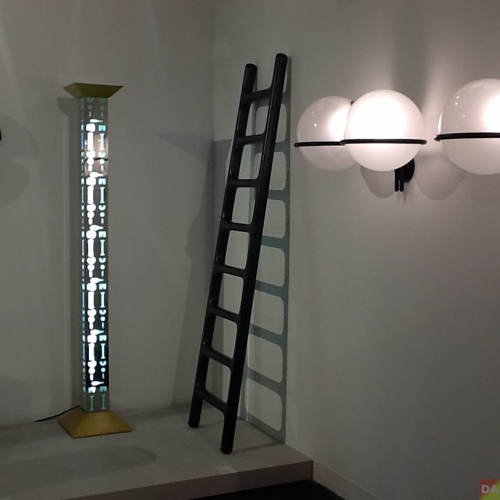 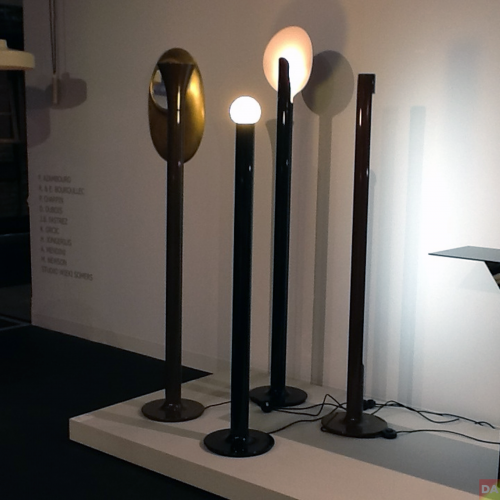 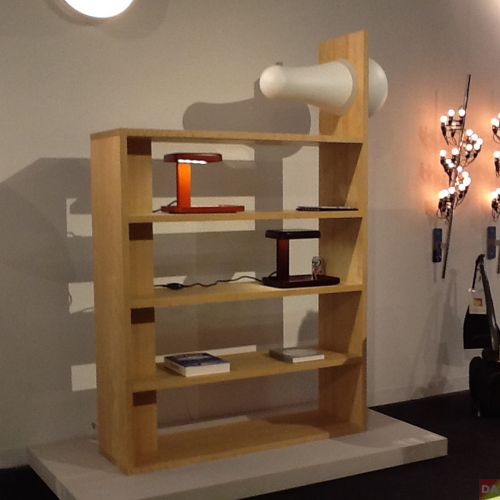 [DA] Didier, I do know what else is different this year. 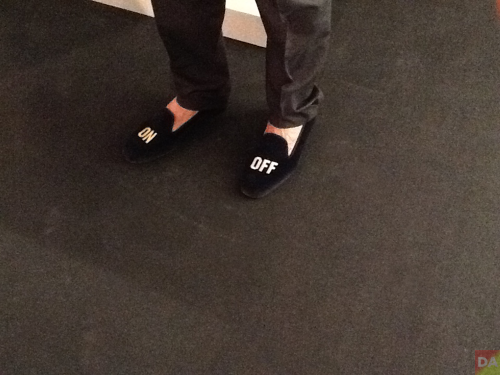 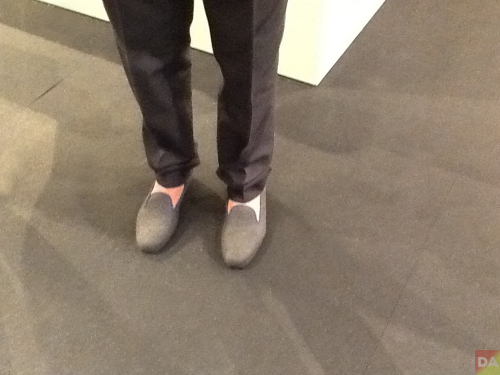 [ galerie kreo ] The kreo Gallery was founded in 1999 by Didier and Clémence Krzentowski. It enjoys an international reputation especially for its limited objects and furniture created by leading designers editions, satisfying it’s founding goal of getting design closer to the public and providing a “space laboratory” dedicated to the research work of these designers. kreo’s first location settled in the 13th arrondissement of Paris in the middle of a group of avant-garde galleries, first rue Louise Weiss, then to a larger space on Duchefdelaville street. In 2008, the gallery moved to the heart of Saint-Germain-des-Prés to 31 Rue Dauphine.