A restaurant/bar/open-air café by french architects 1024 positioned on Île Seguin in the middle of a temporary garden whilst waiting for the architect Jean Nouvel’s macro project to be implemented, Les Grandes Tables de L’ile is a place to meet, for haute cuisine and why not even parties to accompany the reconstruction of this island steeped in history. The project is an architectural hybridization between an agricultural greenhouse, a barge and a timber-frame house. Modeled after a large wood fibre box suspended in a scaffold structure from which freight containers are hanging, all encompassed beneath a transparent umbrella… An eye-catching iconoclastic assemblage with an area of 300m2 to accommodate120 covers and the cuisine of Arnaud Daguin, a chef with stars to his name. 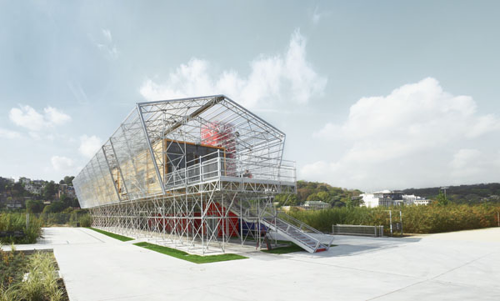 Constructed from scaffolding, wood fibre panels and containers, according to the principle dear to the 1024 duo, the restaurant can be promptly extended by video and lighting effects by changing with the assistance of mapping for the duration of a party or a particular event. ‘A meeting place aimed at initiating the reoccupation of the venue. An architecture which must be able to disappear without leaving any traces…’ 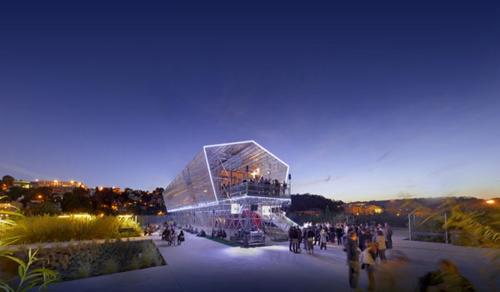 After the renovation of the Social Club in Paris in 2007 and the Metavilla for the Pavillon Français during the Venice Biennale in 2006 (a hotel able to accommodate up to forty people), 1024 has just produced the roofing cover for a school of archaeology site at St Denis on invitation from Patrick Bouchin and the temporary restaurant ‘Les Grandes Tables’ on Ile Seguin. Once again architecture which must disappear without a trace or the exact opposite of the fundamental mission symbolically assigned to architecture: to create memoirs or history, by erecting buildings which are as resistant as possible, to pass on a little engineering from an era. In ‘Notre Dame de Paris,’ Victor Hugo already noted the victory of printing over architecture, a technical and creative revolution which made architecture null, void and decadent stripping it of its need ‘to write the world with stones.’ Printed work was more exciting, easier and faster to distribute, and would attract talent by diverting it from the construction of architectural masterpieces. At the time of shock of digital, how can we not see 1024’s pixelated and fleeting architecture as the symbol of a new acceleration of this deterioration process of the real facing virtual? ‘As architects expected to build for eternity we found that the rules and limits of perennial projects are so far-fetched that they often limit possibilities and creativity. The fleeting dimension of our projects allows us to be liberated and open to larger and more stimulating grounds for expression and freedom.’ Duly noted.