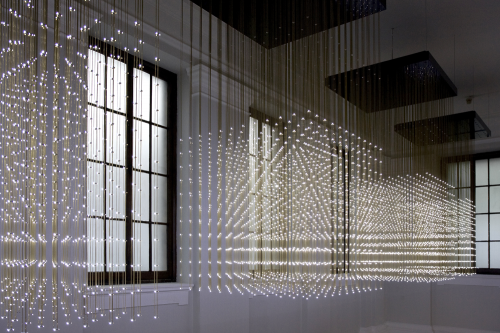 On 18 June, the V&A unveiled SWARM STUDY / III, a new interactive light installation by Random International. The monumental piece will overhang the staircase that adjoins the Architecture and Ceramics Galleries for the next three years. The installation has been developed specifically for this position, in association with the Carpenters Workshop Gallery.

Swarm Study / III is made up of illuminated brass rods, suspended from the ceiling in an arrangement of four large cubes. As visitors move up and down the stairs, so the light follows in swarm-like formations, varying subtly in its intensity. Tracked by a camera, the visitors’ movements stimulate the behavior of the installation. Controlled by a complex algorithm, Swarm Study / III translates collective behavioral patterns found in nature into moving light. Though apparently inanimate, the installation is brought to life by visitors’ activity, engaging them with both the swarm itself and the surrounding space of the Museum.
Swarm Study III by Random International on view 18 June 2011 – 2014
Victoria and Albert Museum | Architecture Gallery and Ceramics Gallery
Cromwell Rd | London SW7 2RL