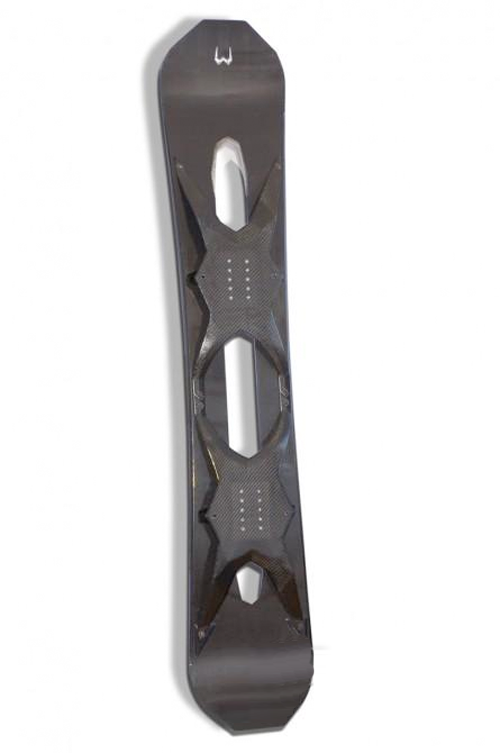 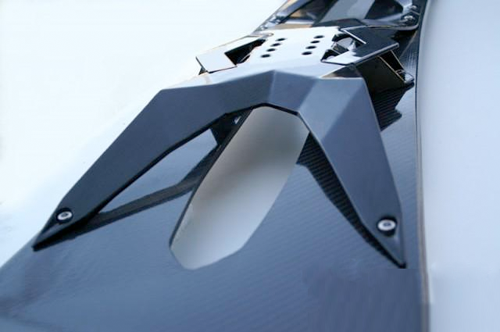 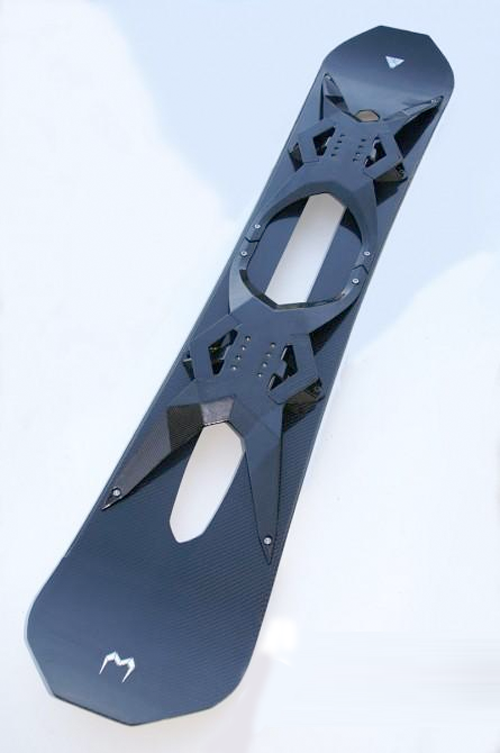 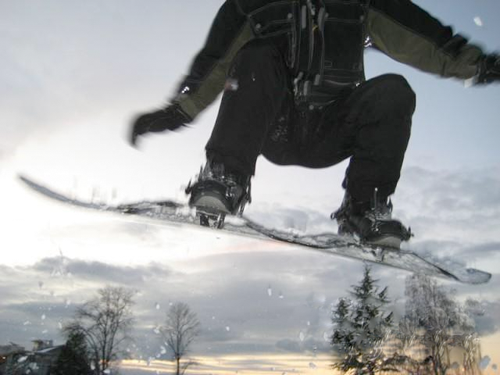 A radical new design that sets out to improve on almost every aspect of snowboard riding – more speed, higher jumps, quicker turns, better fit and less chatter. Now, after four years in development, “The Whip” as it’s known has been officially launched.

The design retains a 4×4 mounting system so it can be used with most conventional bindings but a stiff binding with minimal padding is recommended. While the The Whip will perform well in regular powdery conditions, it’s not built for deep, off-trail powder.

The Whip represents a total rethink of several elements of snowboard design, but at first glance, there are two glaringly obvious features that stand out – the elongated cutout that runs through the center of the board and the raised, carbon-composite mounts dubbed “Spider back suspension”.

The purpose of the Open V Hull shape is to reduce the amount of surface area in contact with the snow and in turn reduce drag for greater gliding speed. The straight inner edges boost directional stability and are positioned lower than the outer edge resulting in a slight V-shape that is designed to improve edge to edge transition.

The second – and most striking – design element is the Spider back suspension, a system which was inspired by Leonardo Da Vinci’s famous Vitruvian Man sketch. Lin explains that the SBS fulfills several key roles – it acts as a suspension system to reduce chatter and because it’s edge mounted, allows for easier transfer of weight directly to the outside of the board, which is curved like a conventional snowboard for turns. The SBS mounts are tilted slightly toward the center of the board for a more natural stance and further assist turning by raising the center of gravity. The inner arms also act like leaf springs to give the board more “pop”.

The board is hand-built from wood, plastic, steel edges and carbon composite while the SBS is constructed with carbon composite. The suspension role played by the SBS also means that there’s no need for a dampening rubber sheet to be added to the board.

Only one model of will be released this year with the company expecting to produce a few hundred this season. The first, 158cm model is known as “The Whip F-117” (see below for specs) and there are plans to introduce more boards by next season.

The Whip is patent pending in the U.S., EU and most of Asia and the “F-117” model is now available for pre-order at the Cheetah Ultra Sports website at a price of USD$1899. Shipping is slated to begin this month. via cheetah ultra sports