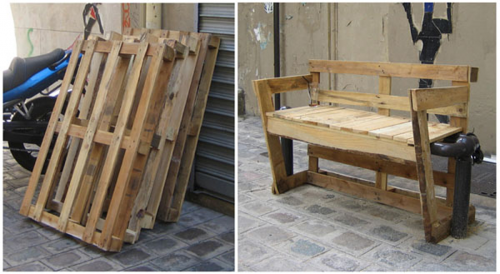 It is not unusual these days for Marcelo Joulia ( Naço Architectures), a tireless globetrotter and seeker of creative treasures at day and night, to come across curious furniture by chance on street corners: spontaneous, urban creatures, seats or cupboards assembled and exhibited on the tarmac by Jeremy Edwards. “Meuble libre is about furniture being produced from other furniture abandoned in the street, used as it is. The form and nature of the objects immediately and spontaneously created on site are determined by the materials available at the time, the place where I found them and the rough tools available. Once the objects have been created, they are left free, on-the-spot, accessible to everyone.” 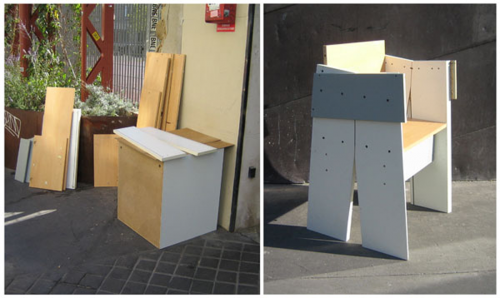 Street design which is as free as it is generous, free then like free software, as if the pieces of vernacular design rejected in the street were a huge domain of formal code to manipulate, break, reconfigure and from it generate new forms. The Meuble Libre exhibition will present works designed in this framework by Jeremy Edwards for Naço Gallery. Some of it will be returned to the street, available for those who want it, other items will be given away. Meuble Libre proposes a reflection which gives a vision of accessible design, which can be approached by everyone and evolves as a consequence, a snub to dogmatic design. It is particularly the relationship with creation, the appropriation of objects by people, their free evolution, their interpretations and all the poetry which emanates from it which interests the designer Jeremy Edwards – including the constraints imposed by the materials and urban situation/integration – just as free as the furniture to which he gives a second life. A manifest exhibition which recalls projects by Tord Boontje, Martino Gamper, Enzo Mari and Gabriel Orozco.