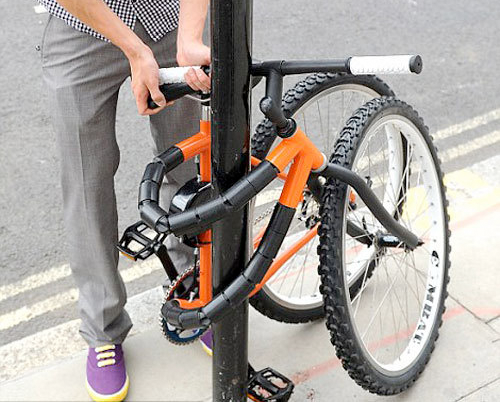 new bike design reduces theft by locking itself around a pole.

With more than 300,000 bikes stolen in the US every year and over 1,200 stolen in the UK every day, perhaps simply locking your bike to a pole isn’t enough anymore. And with more and more people using their bikes to commute to work, bike theft is more than just a bummer, it’s a major setback. Desperate times call for desperate measures, and in this case desperate measures call for good design. 21-year-old British designer Kevin Scott answered that call with the bendable bike. The bike’s frame is built using a ratchet system that can be tightened to ride and then loosened enough to wrap around a pole. Both wheels can then be locked together, securing your ride into a two-wheel pretzel confounding enough to stump your average bike thief.

Scott’s design nabbed the runner-up spot for the New Designer of the Year Award at the UK’s Business Design Centre. He’s already putting the prize money into further developing the design, but is still looking for backers so he can continue to improve it and get it into production.