Life on a string. 35 centuries of the class bead.

The Corning Museum of Glass selected Harry Allen Design to create their 2013 feature exhibition Life on a String: 35 Centuries of the Glass Bead. Working closely with the curatorial staff, Harry and his team crafted an entertaining and educational show. The radial layout responds to the round room of the Gunnar Birkerts designed Museum building. The objects on display are housed in tall, fully saturated cases, designed to highlight the colorful beads, accommodate the wide variety of materials on display, and bring the objects on display up to eye level. 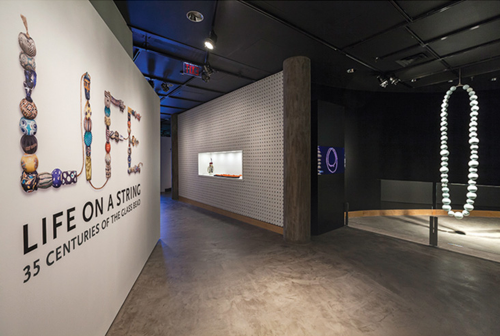 Harry enlisted longtime collaborator Stefan Hengst to develop a graphic identity for the show. The emphasis was on the beads themselves, which provide great visual interest. Beads form the logo and are applied as patterns on the wall. The most striking innovation in the graphic treatment is the complete digital nature of the application. Stefan started a wallpaper company last year and most of the graphics in the show, from the entry logo to the object description, are applied seamlessly as wallpaper. 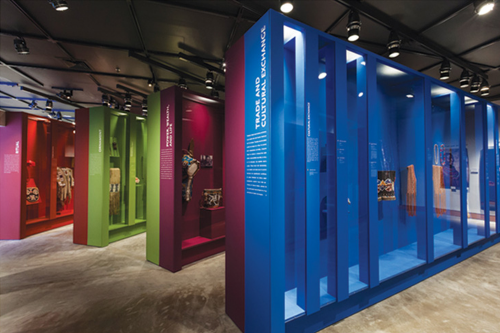 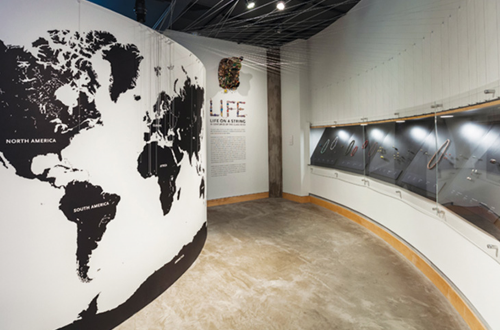 To engage the viewer, the designers developed three interactive areas in the exhibition. The Timeline, which places important beads in historical context, is cross referenced to a map on the opposite wall by a web of strings that crisscross overhead; beads are thus placed in a historical context as well. A small round theater at the heart of the exhibit features a video as well as a display of bead making tools. The “Wearing Beads” gallery combines images of beads being worn in various cultures with images of beaded garments mounted on mirrors. Viewing themselves in the mirrors visitors can imagine themselves in beaded flapper dress and Samburu necklaces.