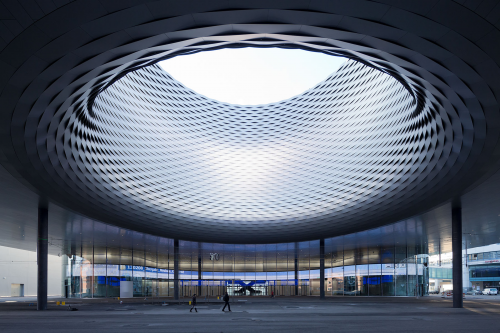 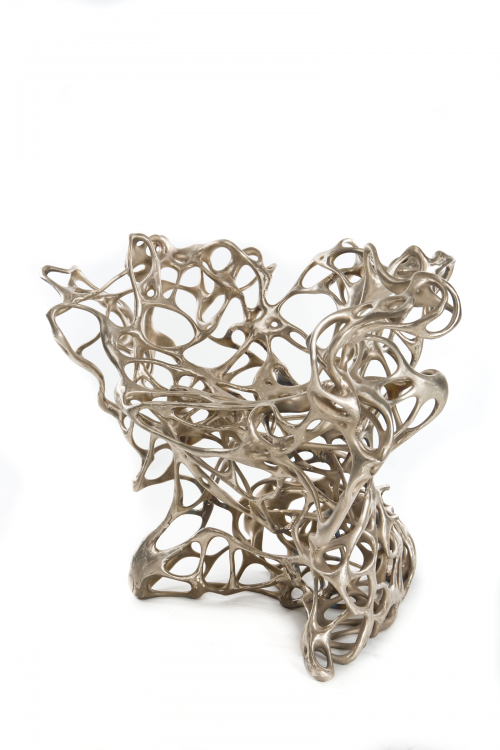 “Growth Chair is arguably the most ambitious example yet attempted using a ‘digital seed’ that, guided by the designer’s protocols, grows wild in a virtual world.” ~Murray Moss / Principal, Moss Bureau 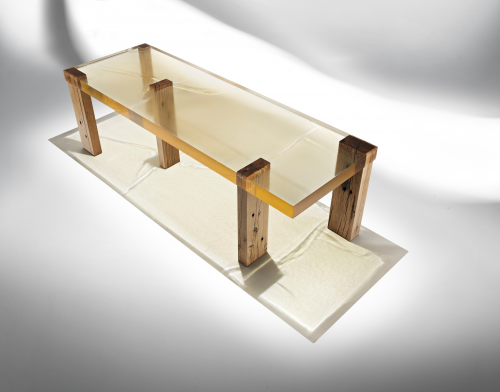 “As a kid, I collected all kinds of things cast in resin. Later, when I studied at the Cooper Union in New York, I cast my architectural models in resin, and now I am truely fascinated to see this conservation and display technique applied to furniture on a larger scale. It´s the real thing, and yet it holds back from us. It is sentimental. It feels as if it’s from a different time, and yet demands state of the art care and extreme technological control in the production process.” ~ Jürgen Mayer / Architect, J. Mayer H. 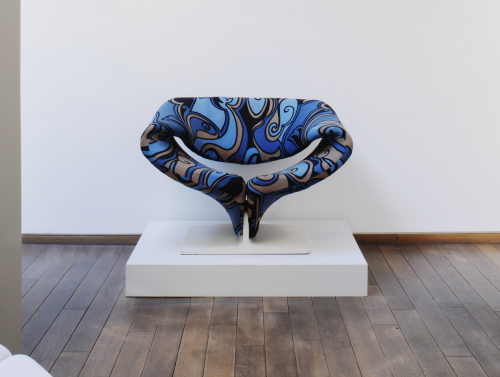 “I have always loved the ribbon chair for its fluid qualities. To me, it has a great sense of humor. It almost looks like a smiling face.”~Vicente Wolf / Interior Designer 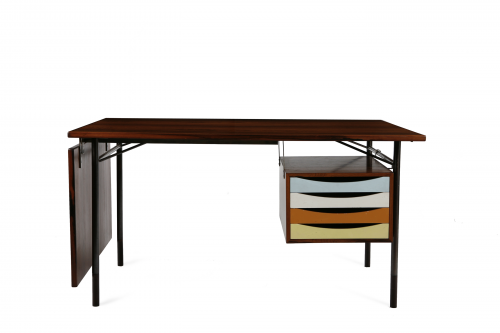 “The writing desk that Finn Juhl designed in 1953 consists of different elements: a drop-leaf made of rosewood, a metal tube supporting structure and a suspended four drawer cabinet. The different elements are clearly legible; Juhl broke with monumental gestures and the idea of material unity as well. Juhl’s writing desk is less organic than other danish design pieces of this time; he succeeded in blending international and danish tendencies. For me the writing desk is one of the most striking and convincing examples of modern design.” ~Hubertus Adam / Director, S AM – Schweizerisches Architekturmuseum 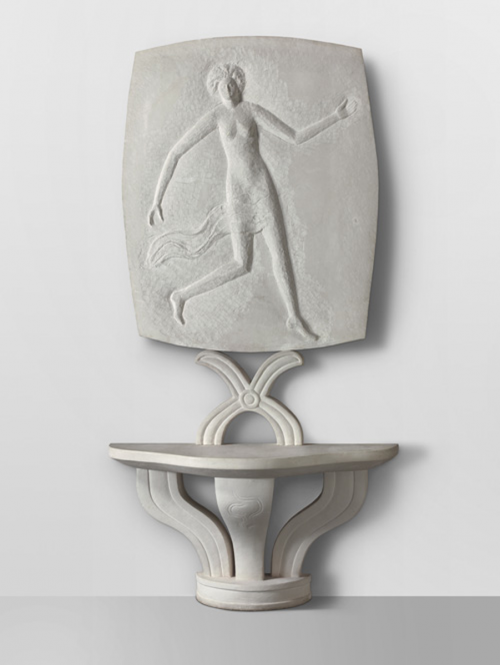 “Giacometti’s work in marble is an inspiration to the forms and shapes that can be abstracted from such a material. It allows for the imagination to go beyond what we see.” ~Juan Montoya / Interior Designer 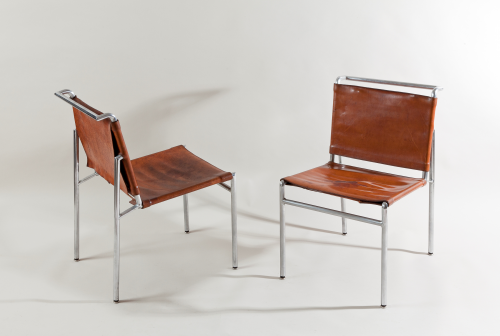 “My choice of two elegant chairs designed in the ’30’s by the great Eileen Gray, might have something to do with seeing her recent retrospective exhibition at the Centre Pompidou in Paris. Artist, designer, architect, Eileen Gray was an anti-conformist and something of a jack-of-all-trades and I was bowled over by her diverse creativity. She was one of a rare breed of outstanding self-made women of her day, considered avant-garde and remarkable for breaking into a male dominated world. Most famous for her iconic lacquer tiled screens and carpets that resemble abstract canvases, even in her mid ’90’s, Miss Gray had an insatiable curiosity and she continue to work exploring and experimenting with new materials when the source of lacquer from China and Japan became scarce. The chromium-plated tubular steel and leather chairs I have selected, are restrained and almost austere. There is no showy flamboyance in their design. Rather a geometric simplicity and presence that has endured the passage of time.” ~Janice Blackburn / Curator and Journalist 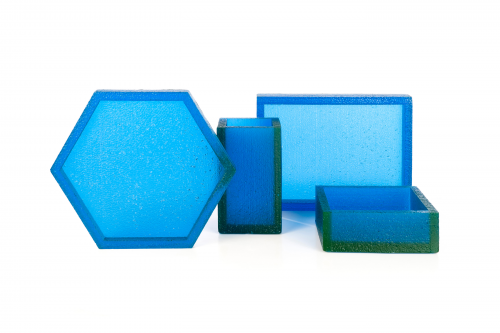 “I find these to be extraordinary for their simplicity of form. The modern geometric shapes are versatile and add a pop of color to any interior” ~Alexandra Champalimaud / Interior Designer

“My favorite of many favorites is the Maison des Jours Meilleurs from Jean Prouvé at Seguin. I love it and would be happy to move in immediately. After all, every day living in it promises to be one of ‘my jours meilleurs’.” ~Sam Keller / Director, Fondation Beyeler 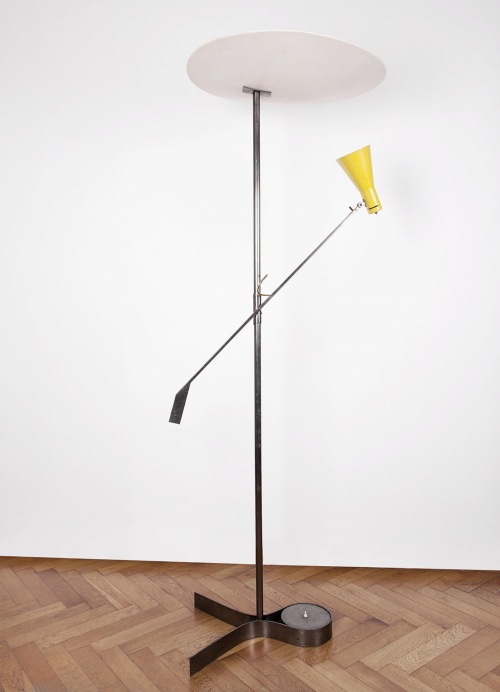 “The Gino Sarfatti 1050 Lamp looks like a casual constellation of different as found objects: the strange sculptured basement, the yellow spot and the pink round element on the top. These happy fellows form together an ambiguous and ironic presence in the room. It is static but at the same time it looks like it is going to move. It creates a new spatial perception oscillating between balance and instability. Looking at this Lamp you may find yourself wondering if something is wrong about it. There´s no answer. And this doubt makes it perfect.” ~Simona Malvezzi / Architect, Kühn Malvezzi 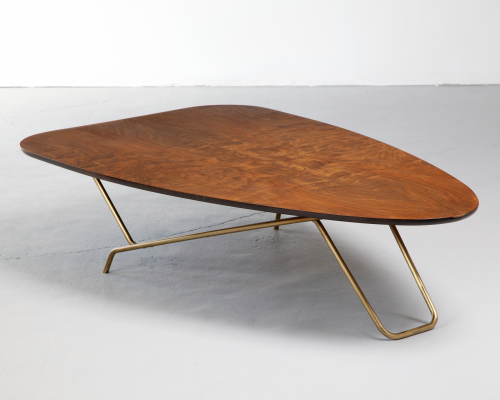 “I have always been intrigued with designs created in the mid twentieth century. Equally, I enjoy the fact that this particular piece of furniture has drawn its inspiration from an utilitarian object of the everyday life. For me, it is timeless and poetic – it also possesses a sense of unassuming simplicity and is genuinely functional.” ~Andre Fu / Interior Designer, AFSO 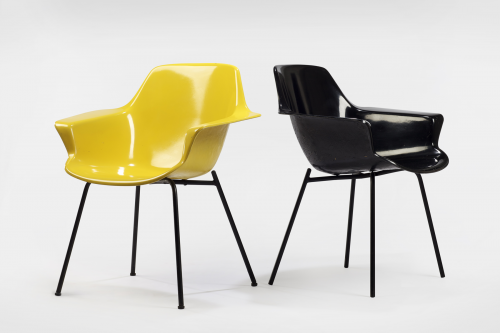 The eighth edition of Design Miami/, the global forum for design, will see a significant increase in exhibiting galleries specializing in 20th and 21st century collectible design. Held December 5-9, 2012 in Miami Beach, Florida, this year’s program will see a 25% increase in galleries, representing both emerging and iconic design works from around the globe. The fair’s rigorous selection process ensures Design Miami’s ability to track and showcase the world’s most significant and groundbreaking furniture, lighting and objets d’art year after year. 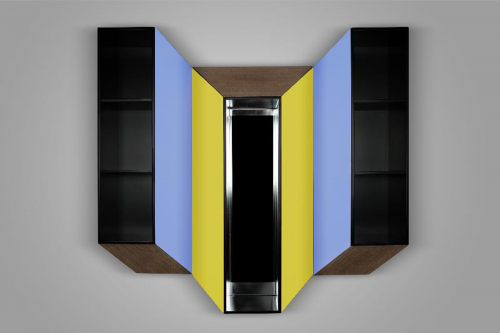 For 2012, Design Miami/ will expand its geographic reach by featuring galleries from previously unrepresented countries including Lebanon, Israel and Germany. In addition to the first-time participation of Chicago-based Volume Gallery and Philadelphiabased Moderne Gallery, exhibitor Mark McDonald from Hudson will mount an homage to the Eames House, while R 20th Century will show highly sought-after works by Wendell Castle, the pioneer of the American studio furniture movement, who is turning 80 this year, and Carpenters Workshop Gallery presents lighting by Johanna Grawunder. 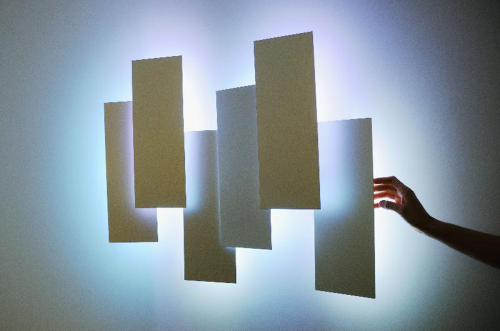 Carpenters Workshop Gallery, Linelight by Johanna Grawunder
Design Miami/ gallerists will also reveal a selection of works inspired by nature, including outstanding Art Nouveau glass and ceramic pieces at Jason Jacques Inc.; furniture and lighting by Jean Royére at Galerie Jacques Lacoste; works by Noé Duchaufour-Lawrance and Taher Chemirik at Galerie BSL; and a series of benches in a garden environment at Cristina Grajales Gallery. 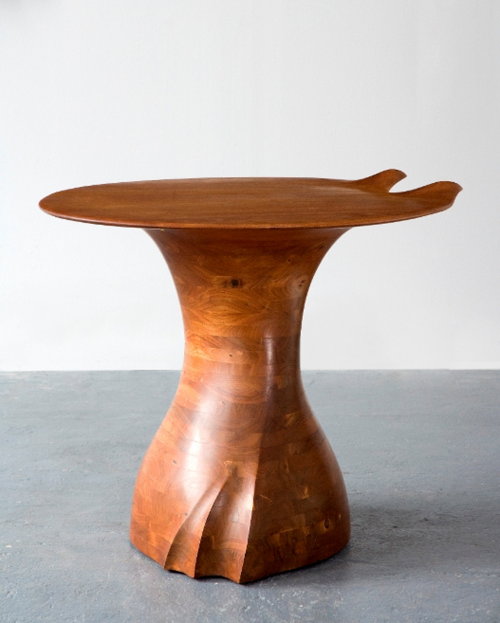 The fair will see an increase in experimental glass with choice works by Ritsue Mishima at Pierre Marie Giraud, Dutch designer Pieke Bergmans at Venice Projects, and Sylvain Willenz at Victor Hunt, and a resurgence of contemporary and historic Italian design from galleries such as Nilufar, Antonella Villanova and Rossella Colombari. 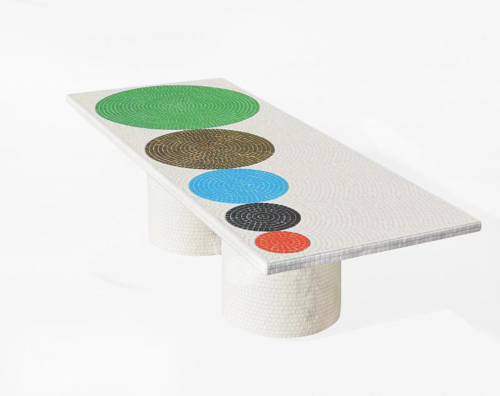 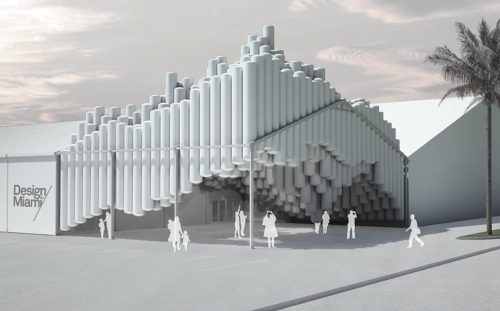 Visitors to Design Miami/ will be welcomed by Drift, a pavilion created by New York-based collaborative studio Snarkitecture. A floating environment comprised of massive inflatable tubes, Drift resembles a topographical landscape in suspension: an ascending mountain above and an excavated cavern below. The lightness of the floating tubes underscores the mass of the enormous installation, visible from a distance of several blocks. The cascading cylinders of Drift lift to create paths of circulation around hanging stalactite forms, providing visitors with a meandering gateway to the fair. Apertures in the canopy above frame views of the Miami sky and allow sunlight into the shaded pavilion. Filtered light passes between the tubes of the excavated cavern, creating a space at the confluence of interaction, conversation and contemplation.

Approached by inflatable structure manufacturer Inflate, Snarkitecture was inspired to reimagine the material of the familiar white vinyl tent, via a large-scale tubular landscape. Incorporating their reductive design methodology, the studio sought to create an unexpected moment of exploration for visitors entering and exiting the fair. Their final design will also feature a courtyard seating installation, which will serve as a place for visitors to relax, socialize and enjoy the view. Snarkitecture is a collaborative practice operating in territories between the disciplines of art and architecture and was established by Daniel Arsham and Alex Mustonen.

Design Miami’s cultural programme, including Design Talks, Design Performances, and Design Satellites, as well as the 2012 Designer of the Year, will be announced in the coming weeks.

[ about design miami/ ]
Design Miami/ is the global forum for design. Each fair brings together the most influential collectors, gallerists, designers, curators and critics from around the world in celebration of design culture and commerce. Occurring alongside the Art Basel fairs in Miami, USA each December and Basel, Switzerland each June, Design Miami/ has become the premier venue for collecting, exhibiting, discussing and creating collectible design. [ design miami/ ] [ design blog ]

Visitors to Design Days Dubai, which runs from March 18-21, 2012, in a custom-designed structure in Emaar’s Downtown Dubai, will see many of the world’s most prestigious galleries showcase important 20th and 21st century design, along with new limited series works commissioned exclusively for the fair. 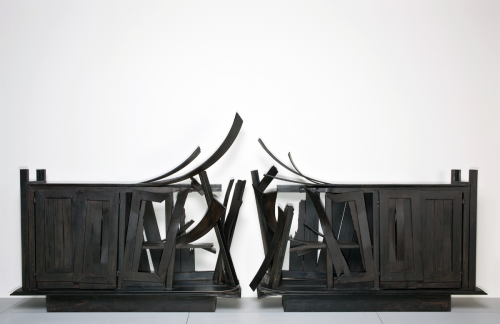 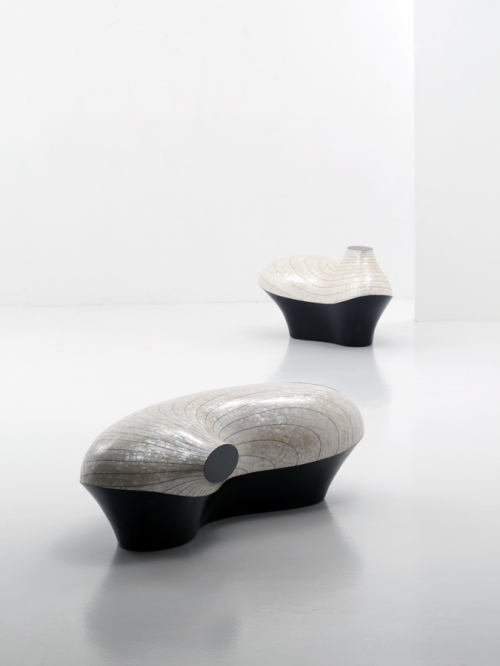 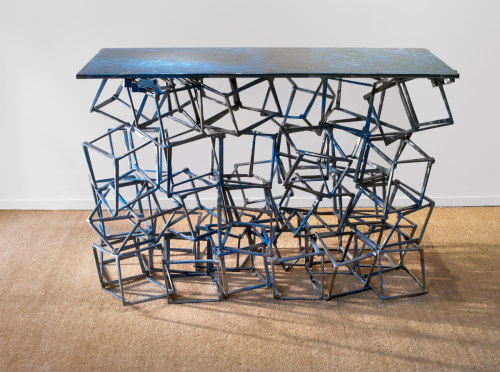 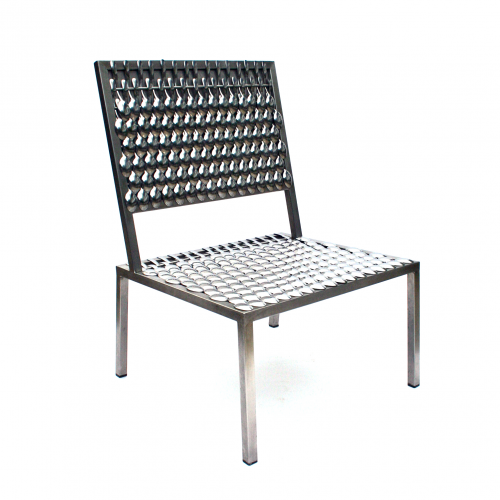 [ about design days dubai ]
The first design fair of its kind in the Middle East and South Asia, Design Days Dubai will be an annual event in the international art and design calendar attracting influential galleries, collectors, designers, critics and curators from around the world with its exclusive showcase of collectible and limited edition design and cultural and educational programme.

Design Days Dubai is held in partnership with Dubai Culture & Arts Authority and will be located in Emaar’s Downtown Dubai – the city’s premium lifestyle community – by the base of the world’s tallest tower, Burj Khalifa, and a short walk from Address Hotels (where the fair’s launch event will be held), The Dubai Mall, the world’s largest shopping and entertainment destination that houses the region’s prime retail outlets, and some of the city’s best restaurants and nightlife