above > china’s high-speed trains at a maintenance area in wuhan in 2012.

three former u.s. secretaries of transportation, are pitching a very bright future and a systemic solution to the u.s. climate, pollution, and congestion woes. they make a great case too.

they mention china, france, germany, italy, and japan as pioneers along with 27 other nations operating high-speed operations. but, sometimes a great verbal argument is not enough. they might enhance their pitch with a vision of what might be, i.e., proposing with examples of possible u.s. routes to override doubts that the u.s. has the necessary population, business and tourist travel density. there’s also the ginormous size of the u.s. which china can only match.

for me, comparing an example of an existing iconic route with a possible american route would help me better visualize a solution. for example, an orient express model has allure: london, paris, venice, budapest, prague, istanbul and berlin. that’s seven cities. that’s more than 1,700 miles. what could a new york city to los angeles trans-continental route look like? cities could include new york city, pittsburg, chicago, kansas city, denver, las vegas, and los angeles. new york city to los angeles by plane is 2,475 miles / 5.5 hours. by car along u.s. 80 is 2,790 / 42 hours. a 186 mph train along u.s.80 would take about 17 hours. note: in 2017 china launched a 248 mph train. anyway, for me i need to see some travel routes, etc. 😉

across the country, overcrowded highways are bottling up our cities and choking economic life. at the same time, oil-fueled cars and planes are pumping masses of carbon and toxic pollution into the atmosphere, polluting vulnerable communities and accelerating global warming.

as three former secretaries of transportation, we believe that high-speed rail is the single most effective way to move america’s transportation system into the 21st century. a robust network of high-speed rail corridors with high-performance connections is the most powerful strategy to dramatically reduce climate pollution while reducing traffic congestion and improving intercity travel.

the interstate highway system, which began decades ago as a fast and efficient means of travel, is now fueling climate disaster and undermining our ability to compete at home and abroad. congestion cost our economy $179 billion in 2017, according to the texas a&m university transportation institute’s 2019 urban mobility report. highway congestion is expected to cost us $237 billion in 2025. americans waste 105 million weeks per year in their cars, and enough fuel to load 58 supertankers to the brim.

compared with highways, high-speed rail lines are a bargain. according to a study by the washington state department of transportation, a proposed high-speed rail line between eugene, oregon, and vancouver, canada, would cost $42 billion while generating $355 billion in economic benefits — a nearly 10-to-1 return on investment. by contrast, widening the i-5 highway between the cities by one lane in each direction would cost $108 billion and do nothing to relieve congestion.

the question is: if we build it, will they come? the answer, without question, is yes.

history has shown that as soon as a country inaugurates a high-speed rail line, the public demands more. that happened after japan opened its tokyo-to-osaka line in 1964. after france opened its paris-to-lyon line in 1981, not only france but all of europe wanted one.

why? high-speed trains are convenient and comfortable. they depart and arrive in city centers instead of remote airports, and do not require tsa checkpoints. they have legroom for all and wi-fi that actually works. want to stretch your legs? you can get up and wander.

thirty-two nations currently have operating high-speed rail systems. french, german, italian and japanese travelers have enjoyed bullet trains for decades. with a fraction of america’s gross domestic product, morocco began operation on a 201-mile line between casablanca and tangier in 2018.

there’s one simple reason we have fallen so far behind the rest of the industrialized world when it comes to high-speed rail. you get what you pay for, and since world war ii, washington has prioritized funding for highways and aviation over passenger rail. since 1949, congress has invested over $2 trillion in highways and over $777 billion in aviation. meanwhile, congress has provided roughly $100 billion toward passenger rail, with just $8 billion dedicated solely to high-speed rail development, according to a report from the committee on transportation and infrastructure.

since 2008, china has invested a mind-boggling $525 billion in high-speed rail. the result? the chinese now operate about 23,500 miles of state-of-the-art high-speed rail safely carrying millions of people around their nation at rapid speeds. these farsighted investments helped pull the chinese economy out of the global financial crisis and create an entirely new domestic export industry.

to compete in the 21st century, america needs high-speed rail. the infrastructure debate in washington provides a historic opportunity for us to catch up with the rest of the industrialized world and build the transportation infrastructure of the future.

to this end, we are serving as co-chairs of the u.s. high-speed rail coalition, a new alliance of business and labor leaders calling on washington to finally get serious about high-speed rail. this is our moment to make high-speed rail a reality across america. let’s not waste it.

the authors all served as u.s. secretaries of the transportation department: ray lahood and anthony foxx in the obama administration and norman mineta in the george w. bush administration.

ford motor company promises to spend $11 billion on technology by 2022, rolling out 16 all-electric cars within five years, the first of which would arrive in 2020. also promised is 24 hybrids. the first all-electric looks to be a high-performance suv. other categories could be commercial vans and…a mustang coupe.

in a nod toward global sentiment recognizing that regulation around the globe will continue to crack down on fuel economy and pollution, and rightfully so. lower prices, longer range, and more charging stations, will drive consumers to electricity rather than gasoline.

[ of interest ] – european union mandates all new homes must have ev chargers by 2019. 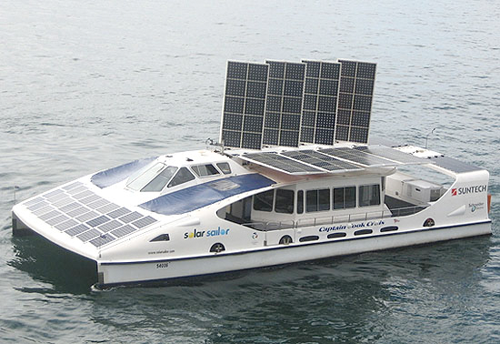 We’ve already told you about solar-powered cargo ships, now Hong Kong has decided to combat the area’s pollution problems by deploying solar-powered ferries.
According to the makers of the vehicles, Solar Sailor Holdings Ltd., the ferries will operate using three-quarters solar energy and only one-quarter liquefied petroleum gas, potentially reducing carbon-dioxide output on the route by roughly half.

Purchased by the well-heeled Hong Kong Jockey Club for an undisclosed sum estimated to be in the millions, the green vehicles will go into operation in November. You can see video of the solar ferries in action here.