one laptop per child

Home Tag one laptop per child

Donate to a worthy charity: One laptop per child. 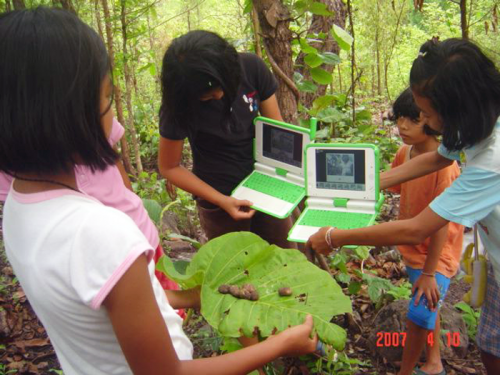 if the last time you raised your hand in mrs. murphy’s third grade classroom was a couple of decades ago, it’s hard to imagine the grade school experience with laptops playing just as vital a role as pencils and wide-ruled paper.
But imagine your day now. How many hours do you use your laptop? Just like the rest of the world, schools are becoming increasingly reliant on laptops, but as learning tools, not to YouTube the Double-Rainbow guy for the third time this week. Lots of schools around the world can hardly afford the roof over their heads, let alone laptops. That’s why One Laptop Per Child is an important, socially impactful charity that uses donations to get real results.

They even developed their own laptop, the XO “rugged, low-cost, low-power” laptop that’s easy to read outside for those schools that don’t have buildings to operate from. In countries where libraries are small and outdated, or, in some cases, nonexistent, access to the Internet is an invaluable resource for children who would otherwise have no contact with the world outside their own. Children in many developing nations are already becoming more educated than their parents’ generation, meaning they will be the first crop of young adults with the knowledge and ingenuity to pull their struggling economies out of a slump, and these laptops are the first step. All donations are accepted. $199 buys a laptop.